When I cycle in the city, I wear a helmet. Because of provincial laws, though, that's a choice that's been left up to me since I turned 18. The other day the current issue of Cyclometer dropped into my inbox, and with it was news that this law has been up for debate in recent months.

In December of last year, MPP John Milloy (Kitchener Centre) made a motion asking that "the government of Ontario: Recognize the safety benefits of wearing an approved helmet...[and]...Make helmet use mandatory for all cyclists in Ontario by repealing the regulation which exempts cyclists over the age of 18 from these legislative changes." 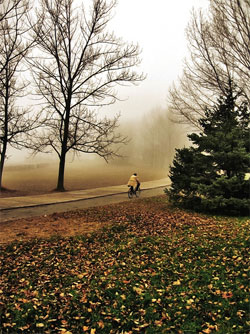 Despite the fact that it's always a good idea to wear a helmet when cycling, I'll admit to being guilty of occasionally going helmet-less when I'm on a quiet road or path - there's something about the feeling of wind in my hair that makes it difficult for me to keep the helmet on. My first reaction to the thought of being forced to wear a helmet in these situations was therefore one of apprehension.

I was inclined to agree with MPP Ernie Hardeman (Oxford), who said, "Perhaps it makes sense that adult cyclists in downtown Toronto should be wearing a helmet during rush hour, as the risk obviously increases with the amount of traffic. [...] Does it make sense to force an adult cyclist on a quiet, smooth road [...] to also wear a helmet?"

After reading the story of MPP Michael Prue (Beaches - East York), whose brother died tragically after falling off his bicycle on a trail, and learning that the number of adults going to the hospital with head injuries is on the increase, I'm not so sure anymore. After all, there are a lot of statistics that indicate wearing a helmet while cycling is as much a no-brainer as wearing a seat belt while in a car.

Is the wind in our hair something worth losing brain functionality or, worse, our lives? Most people would probably say it isn't, but there are also those who would suggest that this is an example of the government over-involving itself in our personal choices...

"Cyclist Down" by beemphoto.com, "on my way" by uwajedi, both of the blogTO Flickr pool.