The Undertow: The Peace Garden

Between design competition presentations and sledge hockey games, I've spent a lot of time in Nathan Phillips Square recently. Each of the firms hoping to renovate the square offers a completely different vision of the space, but they also acknowledge that Nathan Phillips Square is already a great place that just needs some tweaking, not an overhaul.

There are a number of reasons the square is revered so much - it's a place with profound symbolism and metaphor built right into the landscape, and tinkering with the language of the square is about as delicate a process as translating someone else's poetry. With the possible exception of Henry Moore's Archer sculpture, few spots in the square match the poetic language of the Peace Garden. 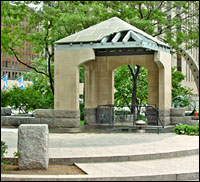 The Peace Garden is made up of several elements which, tied together, make it the landscape-equivalent of a haiku: small but dense. The roof over the small gazebo in the centre of the garden is missing a corner, which could symbolize either the incomplete quest for world peace or the harm violent conflict causes to the basic of human needs of shelter and safety.

Underneath the roof is a small reflecting pool into which a vial of water from a river in Nagasaki was poured by Pope John Paul II in 1984. The pool symbolizes the tranquility of peace, and the Nagasaki water, like the incomplete roof over head, may be a reminder that this tranquility is still out of reach. The low-boil jets bubbling in the pool sound give the garden a quiet, serene feel that almost manages pull away the sounds of Queen Street. 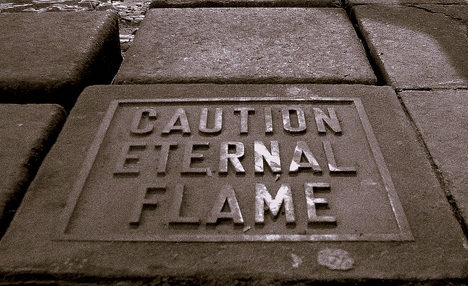 In the centre of the Peace Garden is the Eternal Flame, a symbol both of the struggle for and hope to achieve world peace. Pope John Paul II lit the Eternal Flame with an ember from the Memorial for Peace in Hiroshima, echoing the symbolism from the Nagasaki river water. In perfect Torontonian fashion there is a warning on one of the tiles in front of the pool that reads "Caution Eternal Flame." Thanks to that sign I'm sure countless people have been saved from lunging over the fence into the shallow pool and tattooing themselves with eternal burn marks.

When I approached the Eternal Flame the other day I noticed it was dark, and the closer I got the more it looked like it was "turned off." The small pod the flame sits in was emitting a sound like the giant exhaust fans on the sidewalk in front of the square, but I still couldn't see any fire. A turned off monument does not an Eternal Flame make, so I went in to City Hall to ask if there was a problem. The staff at the reception desk had an answer at the ready, telling me they get the question every now and then - it's nice to know that people still care about this kind of thing. 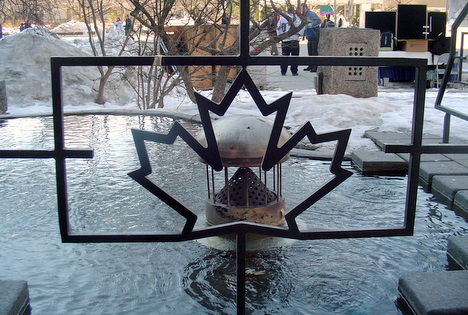 Apparently they keep the flame on an extremely low setting in the winter and summer. It's kept low in the winter to keep it from getting caught in the wind and snuffed out; in the summer it's to keep the area from getting too hot. The best time to see the Eternal Flame in its full glory is in the spring or autumn, when the weather co-operates a little bit better. It is always burning, though, which helps promote the message of the Peace Garden: to " honour the commitment of Torontonians to the principle of world peace."

All images by me except the second, which is from the City's website.