The Undertow: Stone and Concrete Lovers

I spent a good chunk of time thinking about how I was going to capture some of the city's romance for this Valentine's Day Undertow post. Toronto might not really be considered a city of love, but that doesn't mean it lacks romance; you just have to look with the right pair of eyes. Since Heart Park is still a twinkle in the city's eye, and the marriage of old and new that constitutes "the most beautiful kiss in Canadian architecture" is not yet consummated, I had to look elsewhere to find what I was looking for. I didn't have to look too far, though, and what I found was a story that spanned generations and included an unlikely saviour, an opposites-attract symbiosis, and an embrace that dominates one of the city's most prominent intersections.

This romantic tale, like so many others, starts innocently, with the completion of the Church of the Redeemer in 1879. The church was built in what was basically rural lands, standing alone with the trees and the mud. The congregation expanded steadily and the church blossomed several decorative enhancements, including an organ to let it sing and stained-glass windows to filter in pastel-coloured light. In the decades it stood there it became an unmovable part of the landscape, even after the trees and mud it grew out of were felled and paved over. Still, the lonely church had no partner to keep it company, and it stayed that way for a long long time. 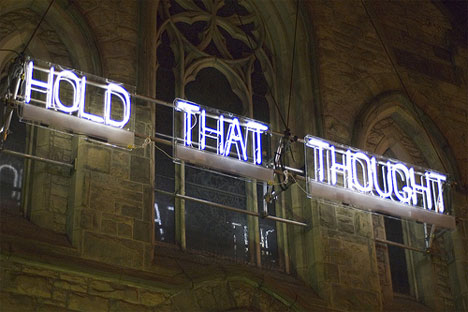 Then, in 1979, on the year of its hundredth birthday, the church stumbled into dark days. No longer able to financially support itself, its parish disbanded, and the future looked bleak. But salvation came from above, several stories above, in the form of air rights. The church sold its air (and surrounding land) rights to developers, who constructed the Renaissance Centre, a part-commercial part-residential building that brought a different life to the corner. In return, the developers provided the church with the funding for a much-needed renovation. With that the old building was given new life, and, armed with a fresh new outlook, it began rebuilding its congregation. Through this partnership the church finally had a partner with whom it could share its space on the busy and bustling downtown intersection, and the Renaissance Centre still stands behind the church like a lover wrapping its arms protectively around it. 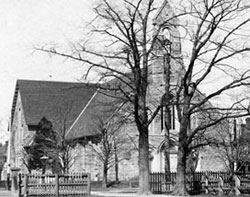 The story of the Church of the Redeemer and the Renaissance Centre is fitting love story for Toronto, and can be interpreted in any number of ways. Some might think it a tragic story, with the Church selling itself just to survive, while others might see it as the unlikely union of two eras tied together by serendipity. The Church of Redeemer's website tells its interpretation: "Ours is a rich history marked by success and failure, disappointment and redemption, hard work and faithfulness, death and resurrection." The intersection might benefit from some greening up, but I like the way the two buildings - so different in function, history, and architecture - manage to compliment and enhance each other, the perfect image of urban romance on Toronto's busy streets.

If nothing else, it's a story that might make you pause the next time you walk by the buildings, holding your thoughts as Kelly Mark's Nuit Blanche installation suggested. What other public spaces come to mind when people think of romance in Toronto?

Images by me, neuroticjose from flickr, and the Church of the Redeemer's web site.