The Undertow: A Gateway in the Sky

Toronto's Downtown Chinatown (or Chinatown West) is made up of staples common to Chinatowns around the world: discount souvenir shops, cheap and (often) excellent food, and streets overflowing with people during the day and rank garbage at night. Something that's missing, though, and something that's been proposed and delayed time and time again, is the presence of a gate. While residents of the area would likely enjoy the sense of community and pride that comes with a gate, the plan never seems to gain enough momentum to get off the ground. Funnily enough, there already is a gate into Downtown Chinatown, and it's right under everyone's noses . . . or rather, above them.

Like much of Toronto, several layers lie beneath the surface of the streetscape. When the Spadina Streetcar Right-of-Way was completed in 1997 the TTC commissioned several artists to create public art displays along line. While each installation varies in appearance and significance, I've always thought the most memorable is the four bright red dragons at Dundas and Spadina. Created by Millie Chen (and called "Gateway"), these four elaborate dragons weave the intersection of Dundas and Spadina together almost as tightly as they weave around each other. While each of the dragons has its own symbolic value, the installations also form the shape of the Chinese character men, the character for "gate."

On the northern installation there is a small, fading plaque where you can read the names of the figures and the artist, but for anyone not willing or able to cross the busy street, the only way you would ever known what these pillars symbolize is if you read Chinese. Maybe the City should move the plaques over to the sidewalk where more people could read them and transit service isn't disrupted by curious people: streetcars stopped to pick me up while I was reading the plaques and taking pictures, their confused drivers looking at me as if I were insane as I waved them on. 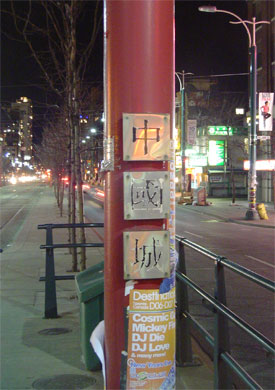 On the southern installation, three fading characters sit on one of the poles like a hidden secret. Unlike the northern installation, there is no plaque translating them, so a bit of digging is required to solve the mystery. The translation isn't as mystifying as you might think, but it's still satisfying to learn that they form the word "Chinatown."

Just like every piece of art, public or otherwise, these tall red poles have fans and poo-poo-ers. Regardless, the gateway in the sky is an iconic part of the intersection that is the heart of this neighbourhood, and it stands as a unique variation on a typical Chinatown landmark.

Images by me and a whole bunch of Chinese-English dictionaries.