I went to Vegas for the weekend, to witness my best friend's wedding (many thanks are due to Rachel's mom), with my sister. Let me tell ya, two days is not enough for this town.

I had the usual preconceptions about the town, cobbled together from music videos, movies and rat pack references. Having only been to the airport before, the only thing I knew for sure was that getting off the plane, I'd be greeted by the every-present slot machines.

We'd taken a late flight - after some last minute manic phone calls from the airport when I realized I did not, in fact, know the airline I was taking, only the flight number. Crisis averted, my sis and I scooted to the correct terminal, made ourselves comfortable, and headed to Sin City. 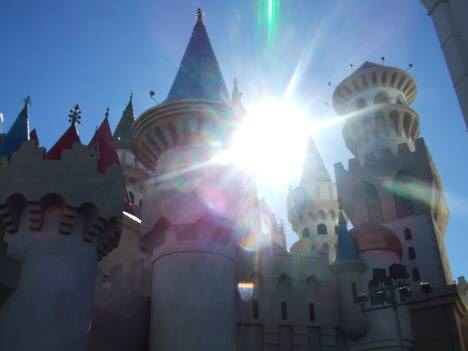 Upon arrival, we retrieved our baggage problem-free, and waited in the longest line for a taxi I've ever seen in my life, odd, given the airport is less than a 15 minute drive from the strip. We waited for about half an hour, and finally tossed our bags in the back of a yellow cab driven by a large, chatty, and somewhat abrasive grey-haired dude.

En route to the hotel, my sister and I politely discussed international politics with our all-American cabby, which of course involved bashing Canada (ha ha ha shut up), as well as some oddly phrased argument about seal-bashing (there was a metaphor involving Asian immigrants).

We arrived at Excalibur, our medieval-knight themed hotel, around midnight. At the check in, more evidence that I've lost my ability to travel well. Not only did the hotel not have our names under the reservation (Rachel's mom had made the booking), but in searching for appropriate ID, I discovered that I had Lost. My. Passport.

Imagine the blood draining from my face.

First things first, I had to call my friend Rachel (again!), and keep in mind that it's well past midnight and she's got to drive tomorrow (let's not even think about what's happening to my cell phone bill). She answers, thank God, the second time I call, and converses with the bloke at the desk.

We are granted access to the room. Rather than settling in for some free cable and well-deserved rest (it's past 4am our time), I get the cab phone number from the bell hop and spend the next couple of hours calling the lost and found.

Nothing. Eventually we sleep.

Friday morning, I call the airport lost and found, the airline lost and found (busy signal, in perpetuity - hint, don't ever lose anything on US Airways in Vegas) and the taxi company again.

More nothing, and it's now approaching noon - Sam and I are starving, but I can't do anything until I've established that I can leave the country.

Because I can't call long distance from the hotel phone, I bust out the cell again to call the Canadian consulate (thank you, yellow pages). Because I'm lucky, it's a Friday (had I arrived Saturday, I don't even know where I would be right now).

At some point during this, my sister goes downstairs to get a muffin and coffee to share so we don't die of starvation. This costs something like 10$ (US). Extortion. But totally worth it. Life is easier with a hit of sugar and caffeine.

Anyway, eventually it's decided that I'm going to cancel my passport, the lady at the consulate is going to fax a letter to the airline giving them permission to let me fly, I'm going to report my passport as lost to the police dept. and hope that when I arrive in TO all of this will be sufficient to convince the customs officials that I actually live here.

It's around one when we leave and start exploring the strip. (The day is punctuated by phone calls from the consulate asking for photos - I have to call my Dad - who lives in North Carolina - and ask him to email the consulate a photo to include in the letter. I'm scared of seeing my phone bill).

The weather is gorgeous and sunny, but unseasonably cool. My sister and I are both wearing our jackets. We take the requisite photos of the fake New York, the fake Paris, the fountains and gardens and shops. It's all strangely reminiscent of a mini-golf course. 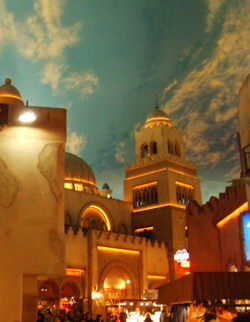 We end up meandering around the shops at the Aladdin, an indoor bazaar complete with sky painted on the ceiling, and Arabian style store fronts (very pretty). My sister stops briefly to do some market research on cashews, for which she is paid a handsome five dollars.

I hunt down what is probably the cheapest not-fast-food along the strip - a place in the shops called Max's Cafe, where I get a surprisingly good goat cheese salad and cup of (hot) tea for under 8$.

We browse around some more, saddened by the prices that entirely prohibit us buying anything. Eventually we get some hand scrub stuff that we spilt (15$/each - 30$ for the pot) because we're duly impressed by how smooth it gets our hands.

I get a call from Diane, Rachel's mum, inviting us to dinner. Huzzah!

On our way back to the hotel, I buy my sister a fruit cup and coffee from 7-11 (she wasn't hungry before, after all those cashews) and we scope out the half-price tickets and decide we want to see V, a variety show back at the Aladdin.

We meet Diane and Glenn (her boyfriend) and (a bit later), Rachel's uncle Dale for a choice buffet dinner at the Luxor. Not the wisest choice given I have a miniscule bridesmaid dress I have to squeeze into the following day, but hey, when do I get to eat like this?

Lasagna, salad, a tasty selection of desserts, and fun chatter with the mother of the bride. Oh, I also retrieve the shoes I'd purchased online to match the dress - these cute Rocket Dog heels, in a grey carpet-y fabric.

In my enthusiasm, I made the mistake of wearing them to dinner, then running down the strip in them to make the show on time. Total massacre. My feet, not the show.

V, an entertaining variety show, was a veritable smorgasbord of random acts. The host was a stand-up/magician type oddly reminiscent of a gay Steve Martin. He appeared a few times between the acts.

First was an impressive juggler who really did have the fastest hands I've ever seen, and whose big finale was playing an oversized keyboard with juggling balls (yes, he made the joke, and yes, it was funny).

Up next were two 0% body fat Russians who did some strange, slow balancing gymnastics - the kind of thing where you didn't really applaud because you were so impressed with how difficult their poses were and you didn't want to distract them.

There was also a magician (the guy who was on America's Got Talent), a guy who put masks on four audience members and made them look silly (I'm not sure how that makes him talented, but the rest of the audience dug it), and some guy who did three second imitations of a bunch of pop culture references. It's hard to explain - kind of prop comedy meets that really energetic friend who does bizarre imitations at parties.
It was funny, and random, and a good time.

We stagger out of the theatre (my feet are a disaster), make a quick stop at the Gap for a rummage through the sales racks, and stumble back to the hotel because we can't hail a cab. There's probably some law about not picking up off the main drag, but it felt a bit like rejection to me. 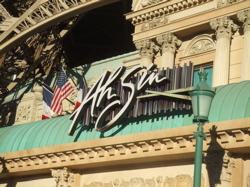 The following morning we meet the girls - Rachel (the bride), Diane (mum), and Kristen (other bridesmaid) - for Brunch at the House of Blues in Mandalay Bay. Delicious food, fine girly chatter, and mimosas. Who could ask for more?

I have the french toast and share a fruit plate with Rach. Sam has a kids portion of pancakes and sips from my drink, since she's not legal in the US (which is a strange feeling).

Afterwards, we head off to get our dresses and the like before reconvening at the spa for hair and make-up (planned by Kristen).

During our preening, I discover that I am in dire need of a haircut - we fake it with bobby pins. Rachel looks like a princess in her tiara, and Kristen looks like Barbie. Diane's less impressed with her voluminous blowdry, but it looks good.

We scramble up to Rach's room and squeeze ourselves into the blue satiny strapless dresses (note to self, there's no shame in getting a dress adjusted). We also add another pound of makeup on top of what we got at the spa. They were too skint with eyeliner and foundation.

I apologize to my abused feet and cram them back into the pretty shoes. I'm now about 5'11 and tower over my friend. Rach looks gorgeous in her dress, and we make our way to the elevator with the groom and his family and head down to the chapel. This involves a parade through the casino level of the hotel. 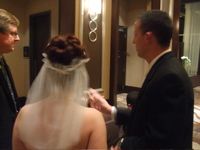 The chapel is tasteful - we wait in the lobby until the space is ready, Rach and Chas (the groom) sign the requisite papers and Glenn and I are given the honour of holding the chuppa for the ceremony.

Photos are taken, the ceremony is short and sweet and, most importantly, sincere. Everyone then gets on a bus/taxi thing and heads to a choice Italian restaurant, Ferraro's, for the reception.

The food is delicious, the toasts, touching, the cake one of those fancy ones that you see on tv. In order to eat more than breadrolls, I have to be gauche and change back into my cords and a sweater in the bathroom. Even so, it's hard for me to finish a four course meal.

It's like any other wedding reception - people talk and get drunk and enjoy the food and cry a little and bond and all in all, it's really lovely.

We head back on the bus and have to head to bed - our flight's early and I have to file my lost passport report at the airport before checking in.

I hug my best friend goodbye and have all those philosophical ponderings about becoming a grown-up and love and big life decisions and no, I was not drunk, I'm like that all the time anyway.

Back at the hotel, we pack up, talk about the wedding, and set our alarms for four hours hence.

We stumble out of bed at 5, and make it to the airport a little after 6. This time our cabbie is an immigrant, we talk about travel and passports and he's very sweet. I try to pay with a twenty and he (because he doesn't have change) doesn't take a tip.

The airport police woman is nice and it only takes a couple minutes to fill out the form. The US airways people are satisfied with the fax from the consulate, and since they let me come in on the passport, are willing to take me out without it.

Sam and I breakfast at Cinnabon, and get on a plane. We fly through Phoenix, so we have a sizable layover before the five hour flight back to TO.

We nap on the plane, and I read Wired (which has a really interesting article about atheism this month, as well as some choice 6 word sci-fi short stories).
Canadian customs lets me through, and I breathe a sigh of relief. It's good to be home.

Now all I have to do is replace my passport before Christmas.