Ask most people who the new James Bond is and they'll likely be able to answer, they'll probably even add an opinion as to whether actor Daniel Craig will fill the famous Bond shoes, but ask anyone who Frank Pickersgill is and you'll likely draw a blank stare. Pickersgill, however, is not very different than Bond, except that he was a real spy, and a hero, a Torontonian and didn't sport the same kind of Bond bling. Frank fought for our country, during World War II, as part of a unique group called the SOE - Special Operations Executive - initiated by Winston Churchill.

To train this elite force Camp X was created, close to the shores of Whitby, Ontario. It was at this spy school that Canadian, American and English men and women were taught how to transmit messages secretly, kill silently, and how to handle interrogation if captured. 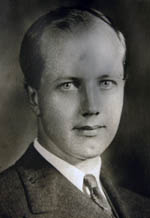 Pickersgill was captured, and interrogated, on a couple different occasions. The first time he broke out by sawing out his cell window, using a blade baked into a loaf of bread. Years later, the Canadian spy parachuted into enemy-occupied France. Fellow SOE members drove into the Loire Valley to find him but all were intercepted and Pickersgill was taken back to prison. This time his escape through a second floor window didn't end successfully. He was recaptured and later executed. A garden is dedicated in his honour on UofT's campus.

It's not the ending fellow Camp X alum Ian Fleming, creator of agent 007, would have written but it's a story that deserves to be told out of respect to those who helped gain our freedom.

Die-hard Bond fans should know that the Bond character was inspired by the author's stay in Toronto, but some will argue whether it was an Avenue Road church that prompted his character's namesake. If Fleming were aiming for authenticity it may've been with a Canadian accent that we would hear the famous spy's introduction: "Bond, James Bond" and Canadians would realize that their biggest heroes are not Hollywood-born.