You know the episode of Seinfeld where Kramer decides to widen the lanes of the highway for more luxurious driving? Well, the equivalent of that is what is happening to the bike lanes on the Queens Quay during August 11th-20th for "Quay to the City". While it wasn't exactly my version of a street party, there were quite a few things going on along the kilometre of geraniums and "picnic lawn".

I happened upon the International Market/World Cafe down at the Harbourfront where I was able to check out some nifty jewelry, clothing and the like. Did I taste the food? You bet I did.

Unbeknownst to me, the Hot & Spicy Food Festival was also going on in the Lakeside Terrace Tent. I was able to sample many different kinds of hot sauces, chutney, chipotle, jellies and even some chili chocolate sauce! One word: Dang. All that I could smell in the air was spice and considering the alarms that were going off in my mouth, I was surprised that the fully licensed bar remained rather empty. 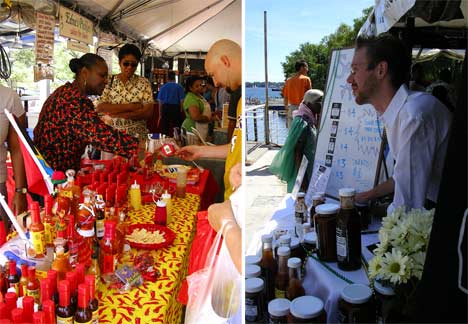 After venturing further down the water, I could hear music and soon saw a crowd at The Toronto Music Garden. I had walked into the "Words of Mercy, Songs of Apollo" baroque concert. After being handed a brochure, I found out that the Summer Music in the Garden is every Thursday at 7pm, and every Sunday at 4pm. It was a perfect venue for a Sunday afternoon, I just wish I had remembered to bring my sunscreen! 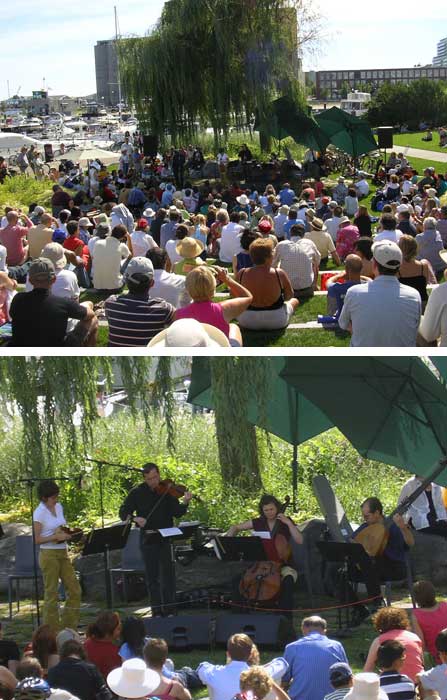 After all was said and done, the new street makeover could be a really cool addition to the Queens Quay. Walk, bike or blade, just make sure you take advantage of the "two lane comfort cruise".