AM Bagel comes to us from the same hardworking hands that make Penny Candy Jam.

Spartan butcher paper and chalkboard menus list sesame, poppy seed or everything Gryfe’s bagels topped with the jams and/or cream cheese, or made into sandwiches. 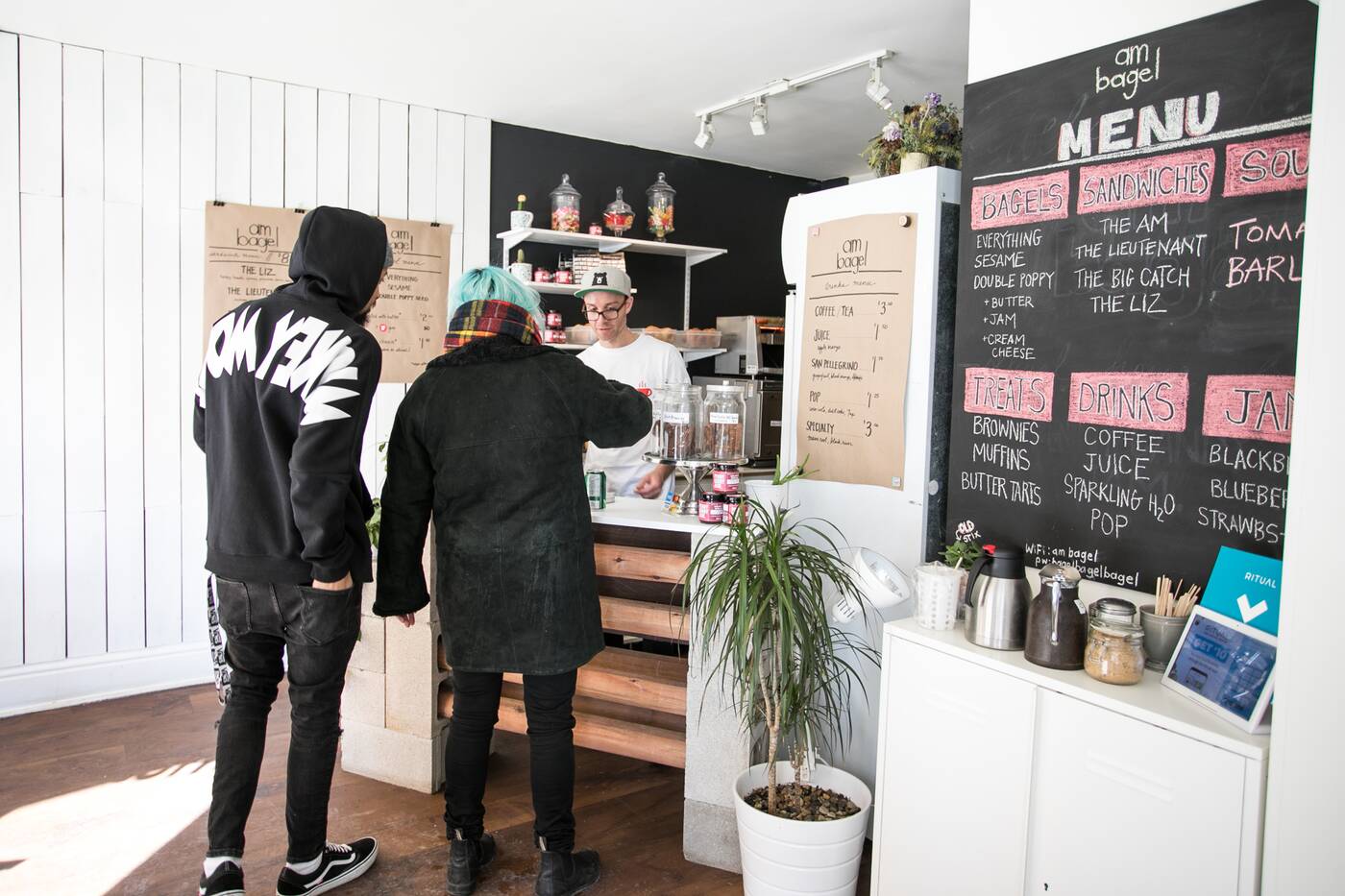 AM Bagel takes over the teeny space formerly occupied by Seventh Sister Bakery, and indeed they’ve taken on some of their recipes like those for tuna salad and baked goods. 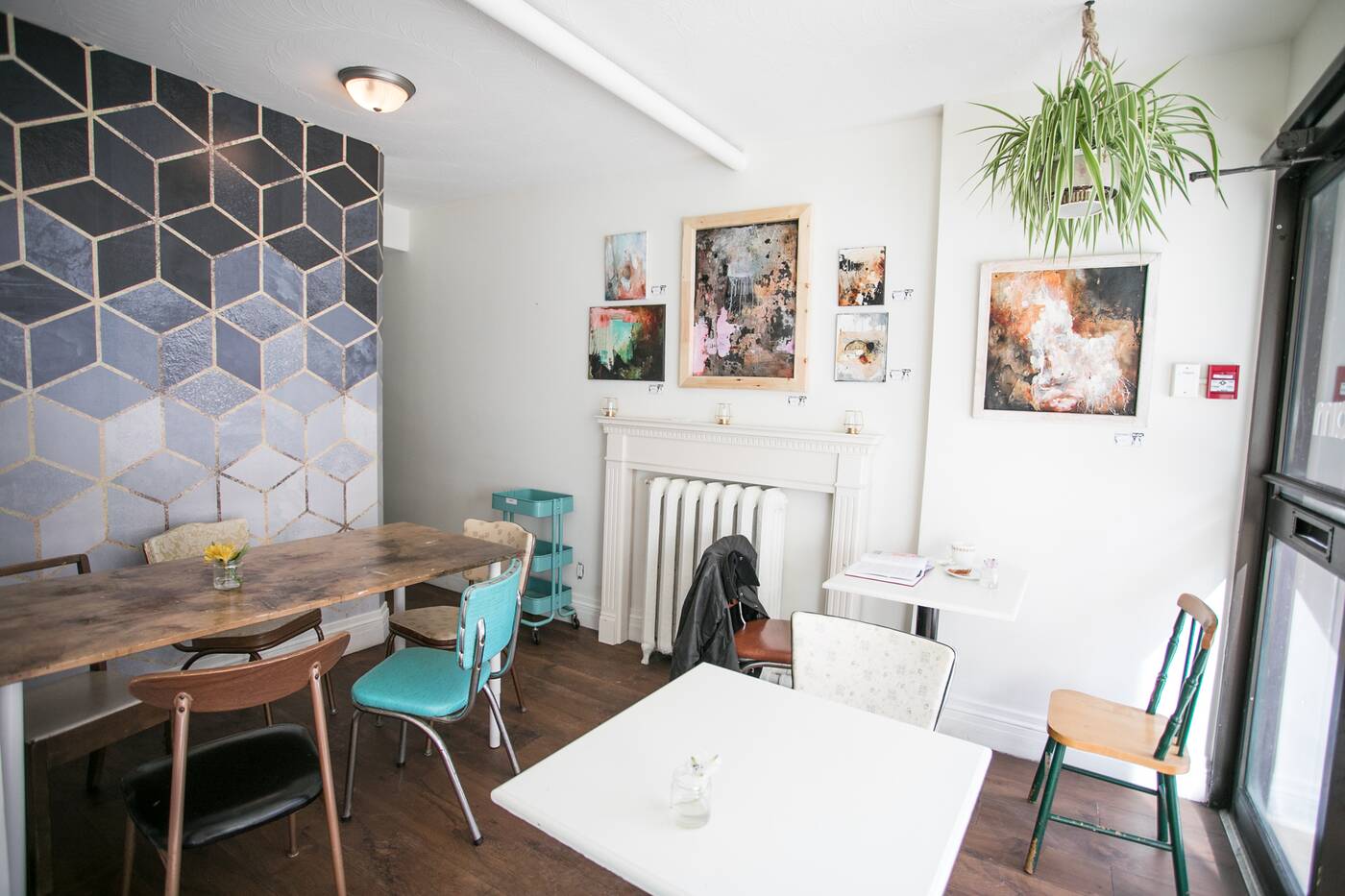 Otherwise, the 13-seat space has been completely made over, with a tiny pop of colour poking out from new wallpaper in reference to the past occupants. 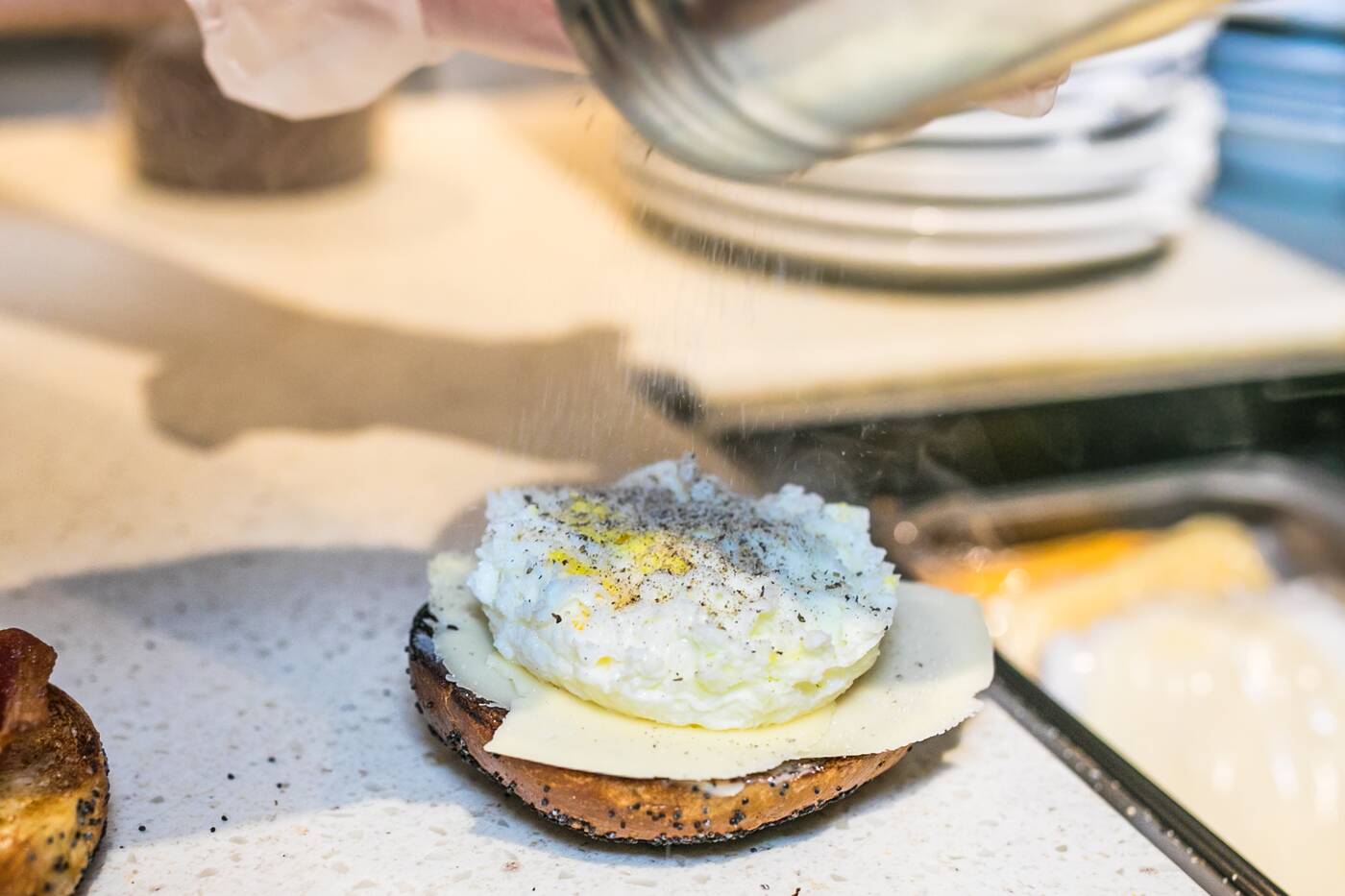 Bagel sandwiches are $8 across the board, The A.M. your classic breakfast sandwich with bacon, egg and havarti.

A poppy seed bagel from Gryfe’s is puffy, fluffy, classically Torontonian with an ample coating of seeds, toasted nice and even with browned edges in a conveyor oven.

Bacon is on the crispier side, the egg poached in the microwave so it’s somewhere between soft and hard with a fluffy texture. Havarti is a bit creamier, richer and sharper than typical cheddar or the like. 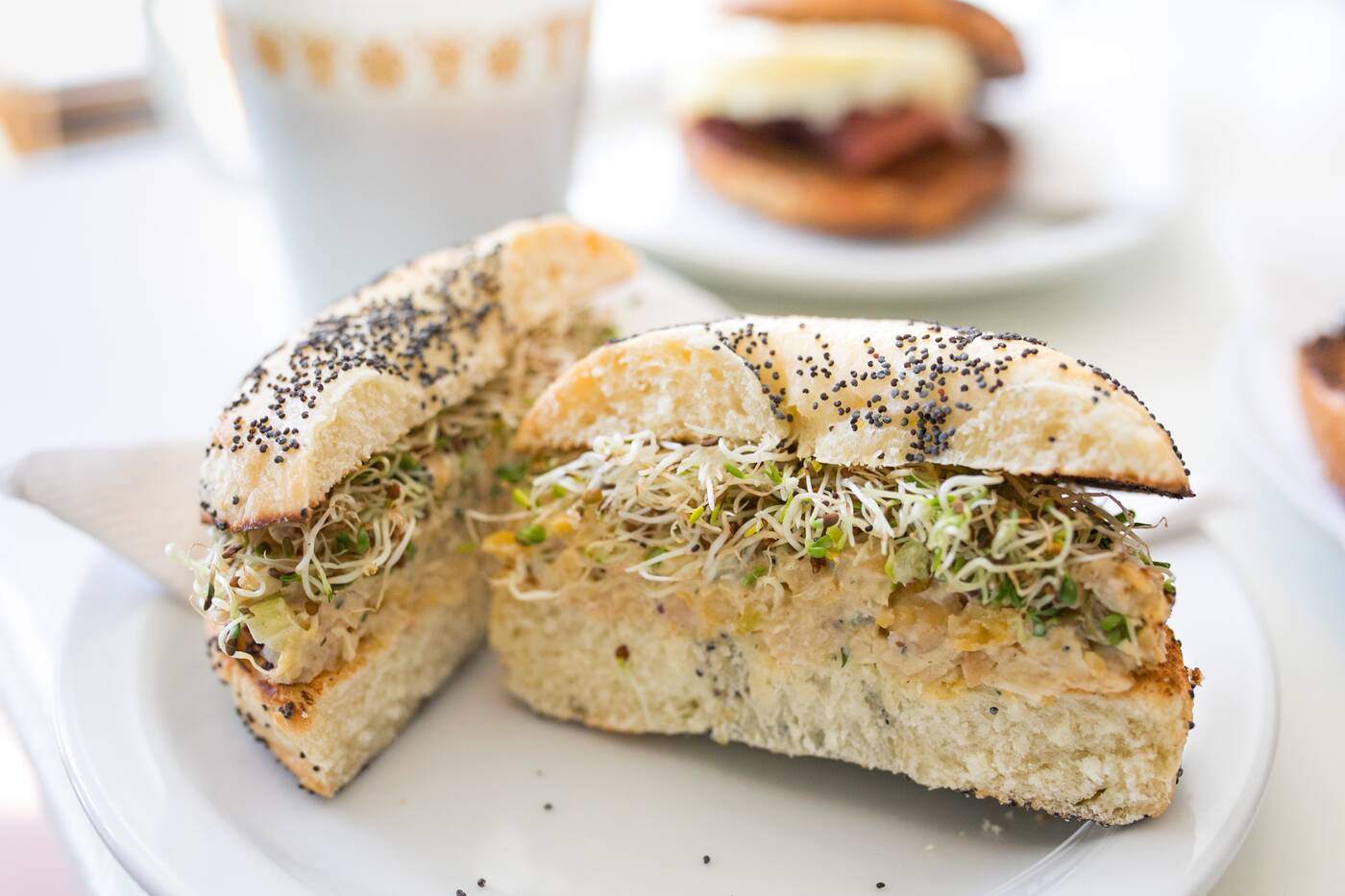 The Lieutenant is their totally vegan bagel sandwich with a crisp chickpea salad made from scratch in-house and sprouts for some extra crunch and pepperiness. 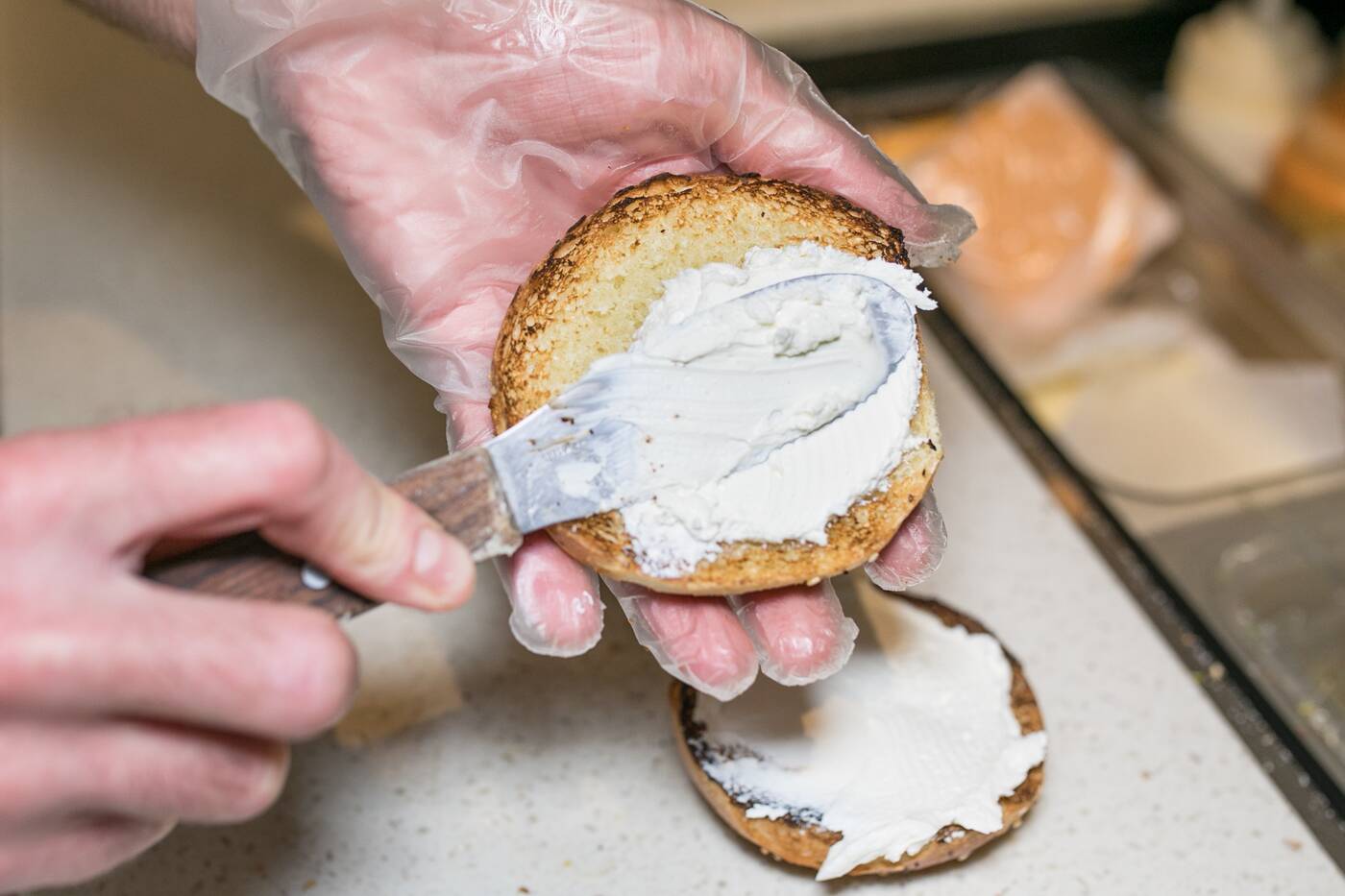 Bagels start at $2.50 toasted with butter, with a 50 cent charge for vegan Penny Candy jam and a dollar charge for sliced cheese or Byford Dairy cream cheese. There are vegan options for both butter and a house cream cheese, and Gryfe’s bagels are vegan by nature. 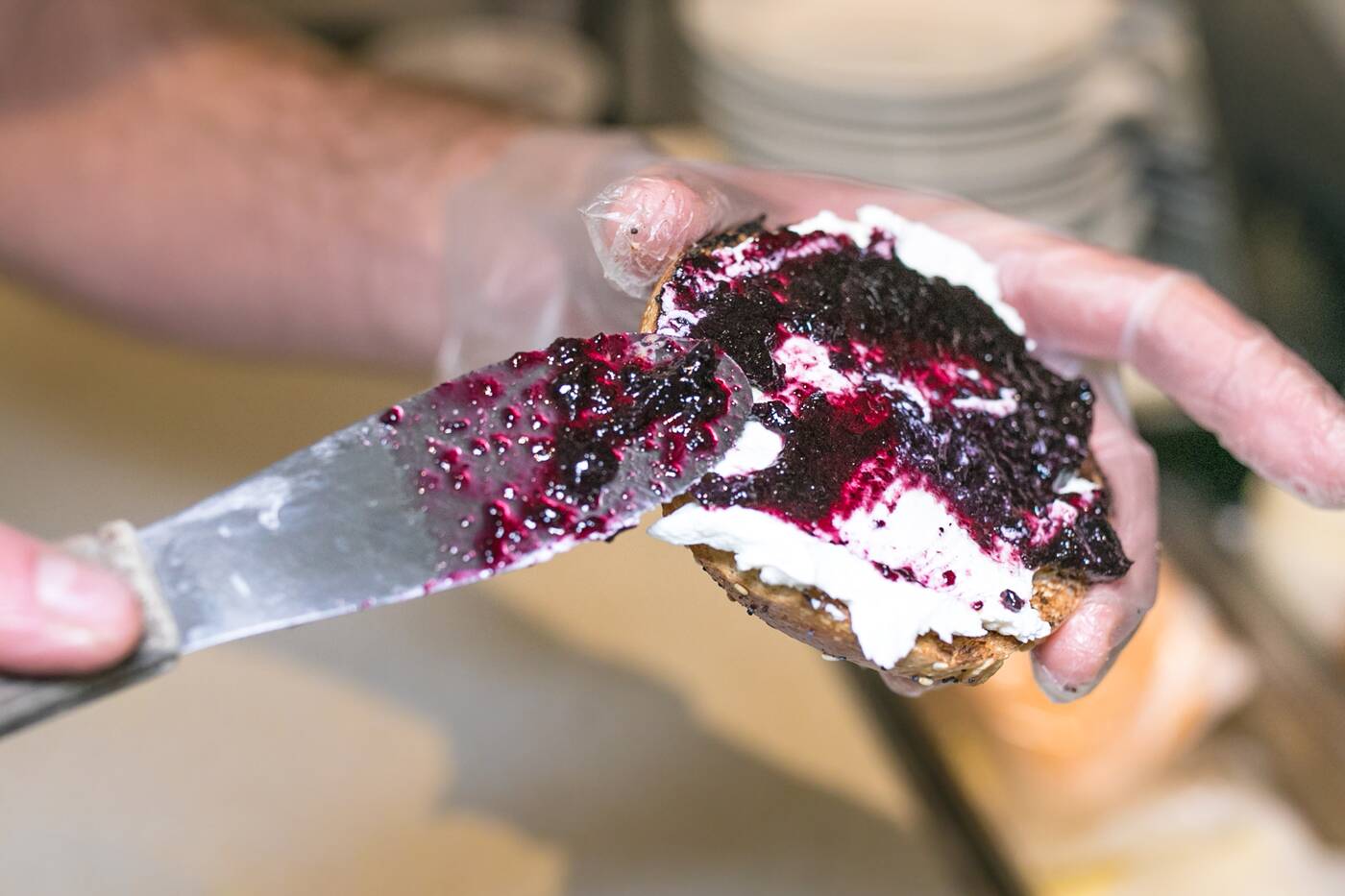 Blueberry lavender mint jam tastes mainly of blueberry, but it’s clearly a notch above the average with the other flavours subtly dancing in the background, bursting with natural berry flavour and sweetness. 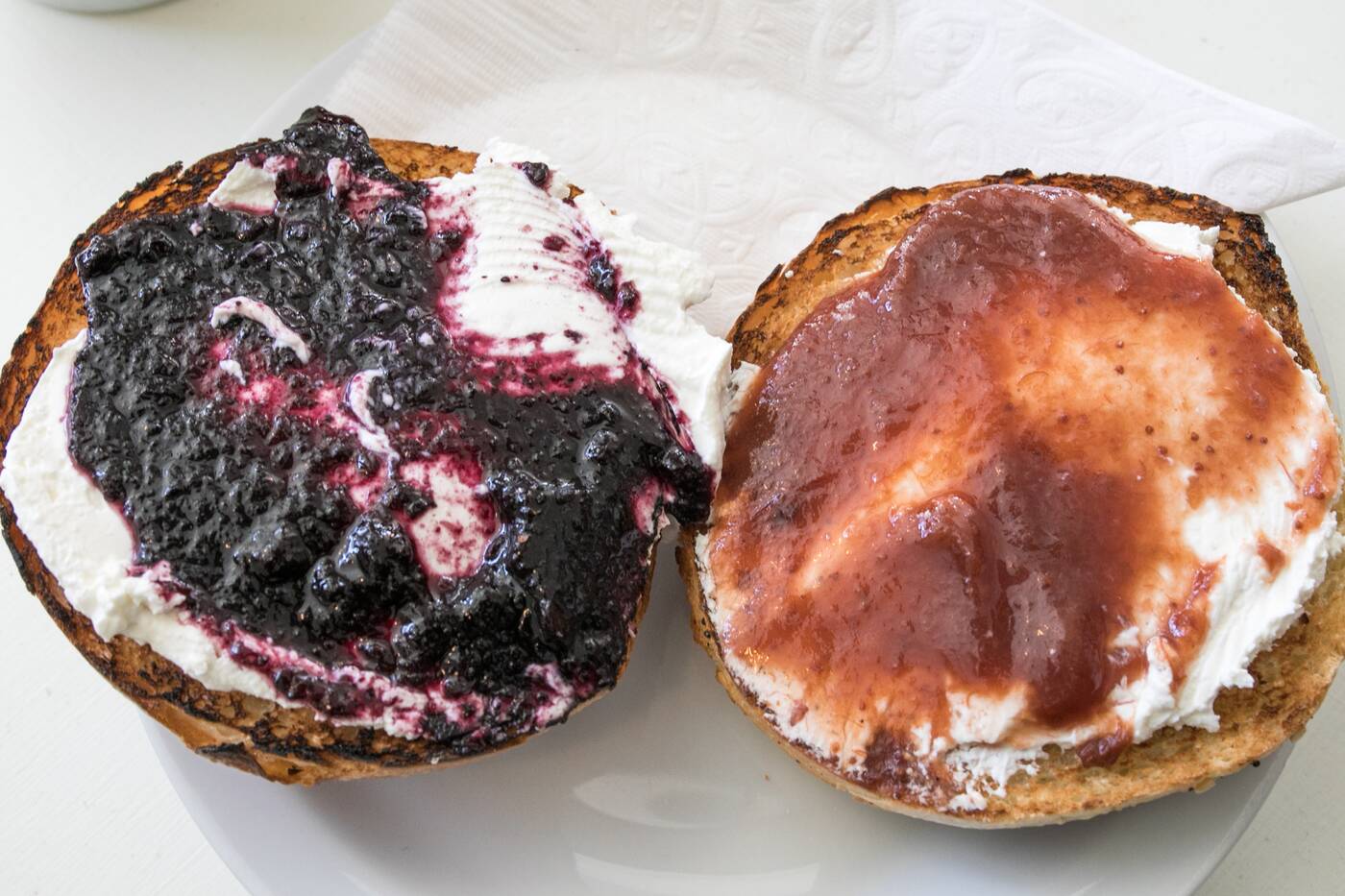 A strawberry rhubarb orange mint jam plays citrus and herb notes off juicy, sweet strawberry rhubarb flavours, feeling almost like a pie filling in jam form. Everything bagels from Gryfe’s are still subtle enough to let the simplicity of the cheese and jam shine. 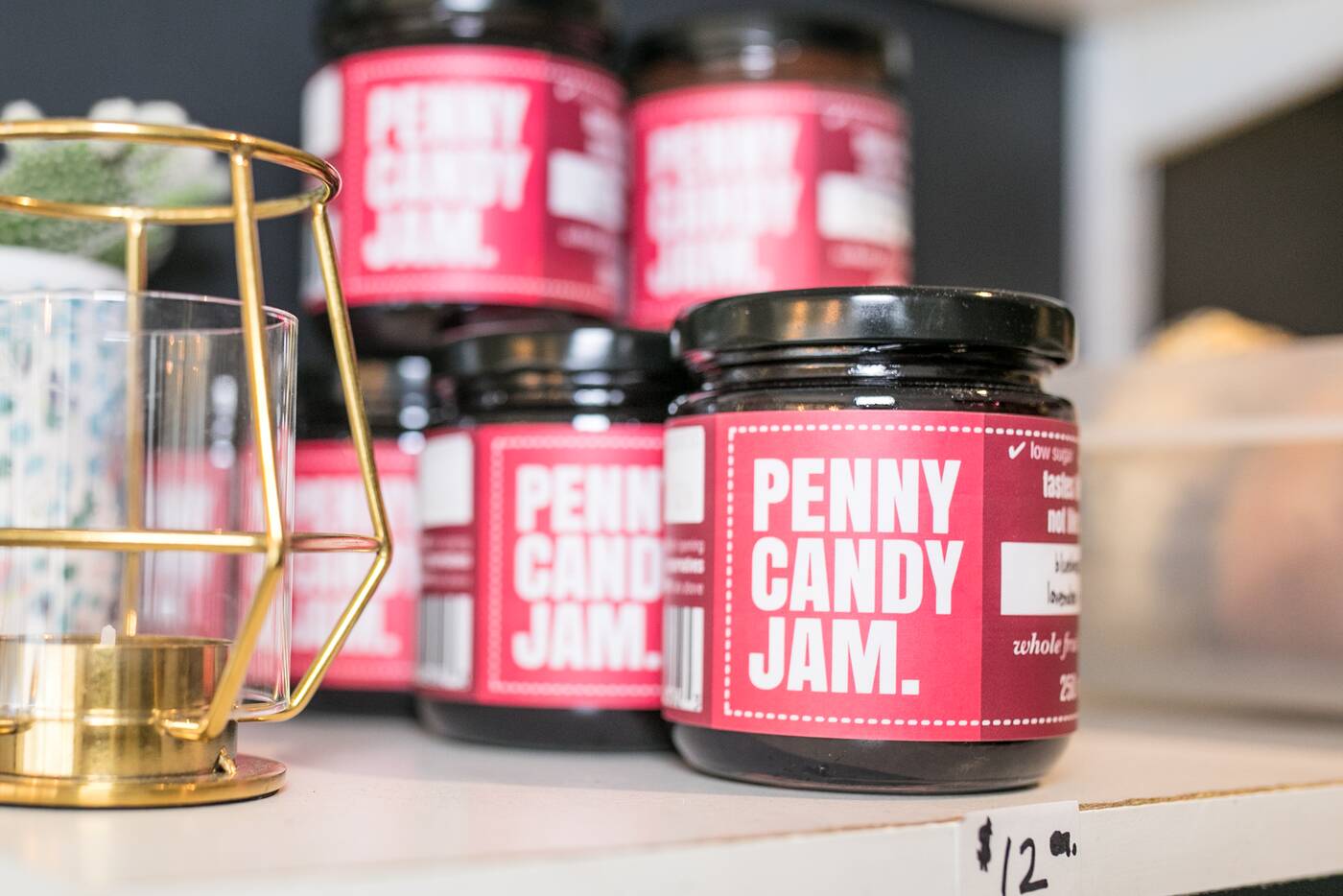 Of course, jars of all-natural Penny Candy Jam ($12) are retailed here, the AM Bagel space even used for production. 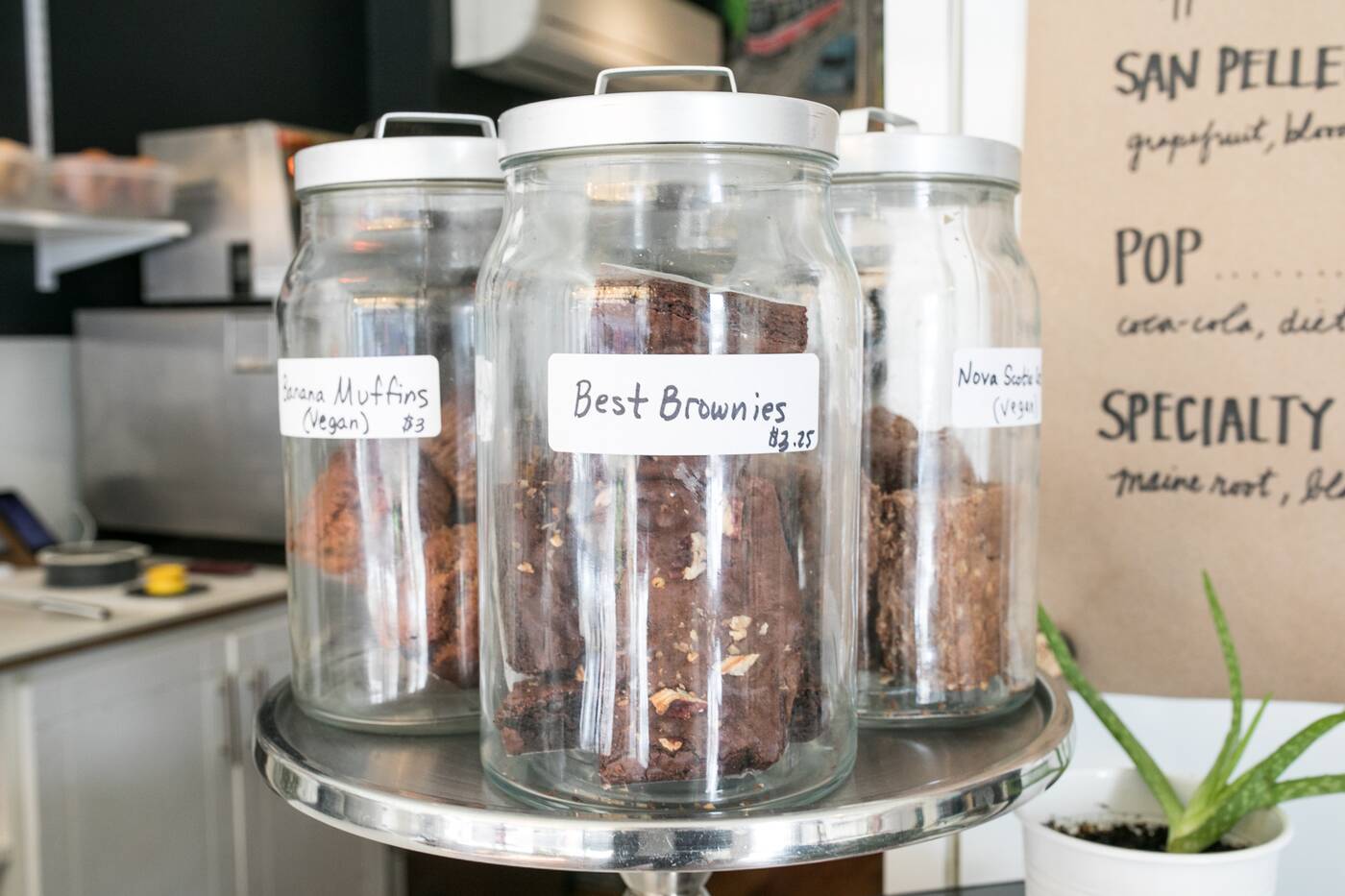 Some recipes for baked goods were passed down from Seventh Sister, as well as their tuna salad recipe for The Big Catch (tuna, cheddar, pea shoots). 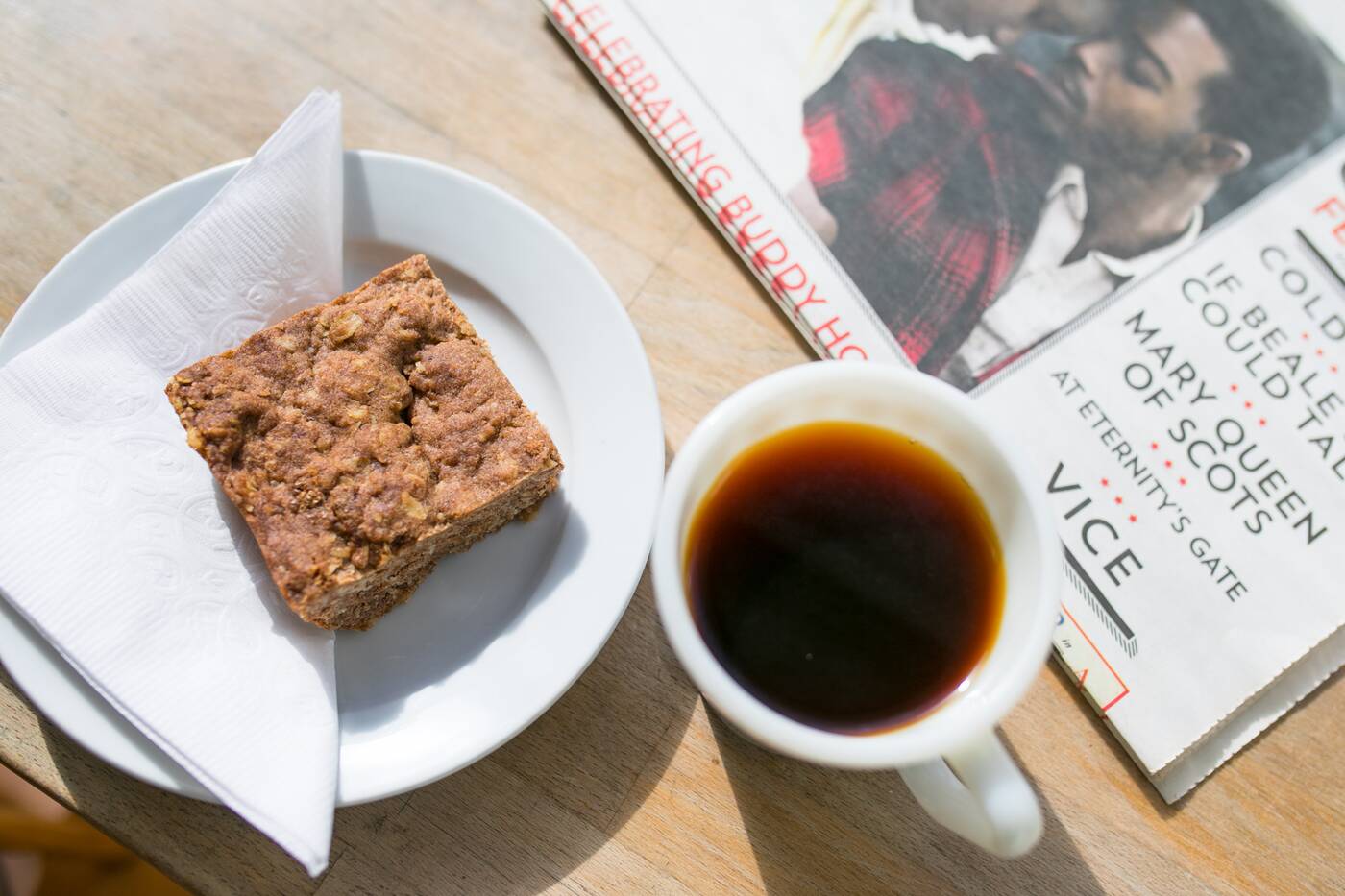 A Nova Scotia oat square ($3) also happens to be vegan, very oat-y, fibrous and filling for a baked treat. Coffee is provided by Cut Coffee, their Butter Knife used for drip and their Single Origin for pour over. There’s no espresso machine in here, so head elsewhere for lattes. 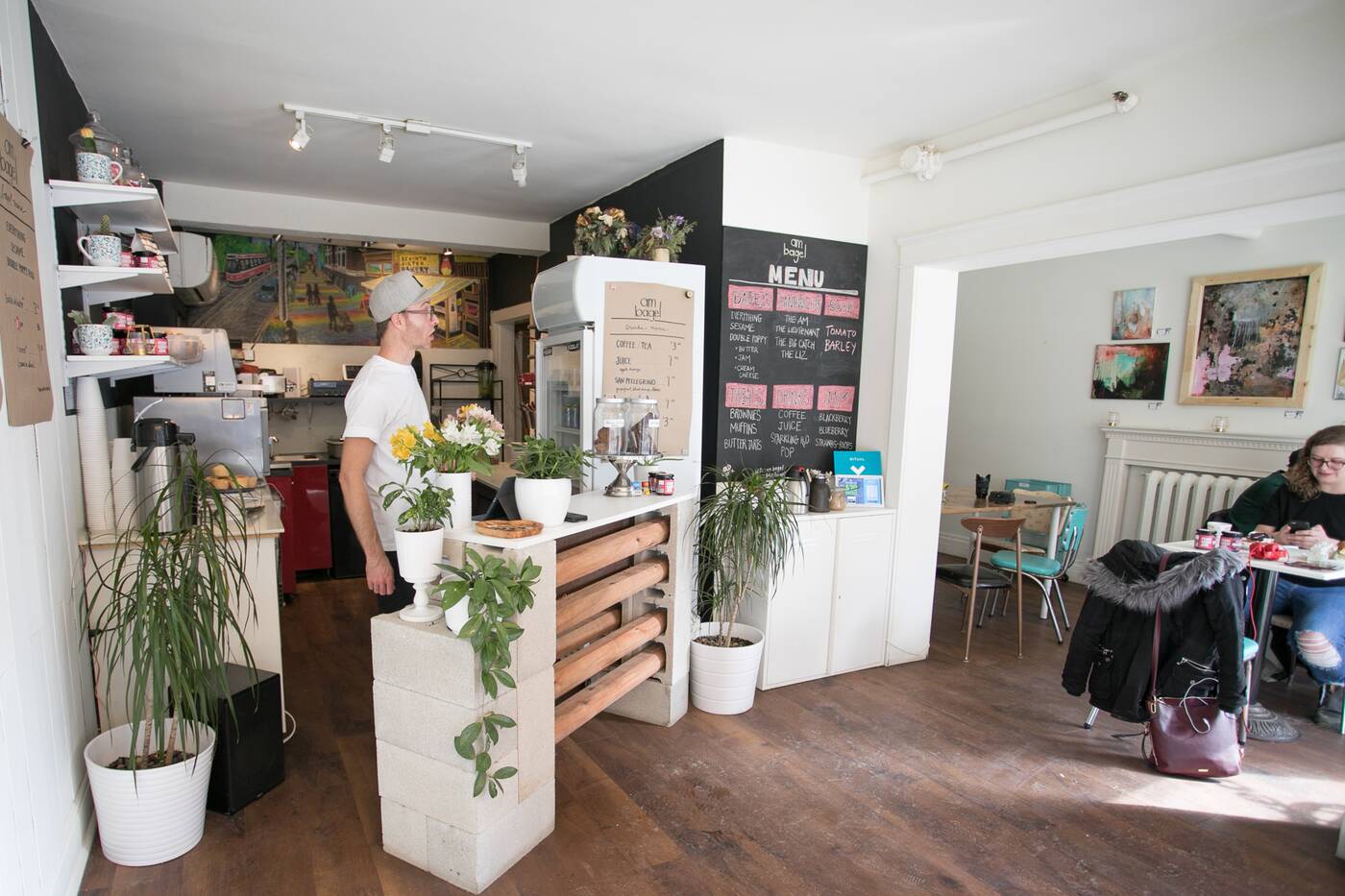 They also typically have a soup (tomato barley during my visit) and bring in butter tarts from The Maids’ Cottage. Ritual pickup is available. 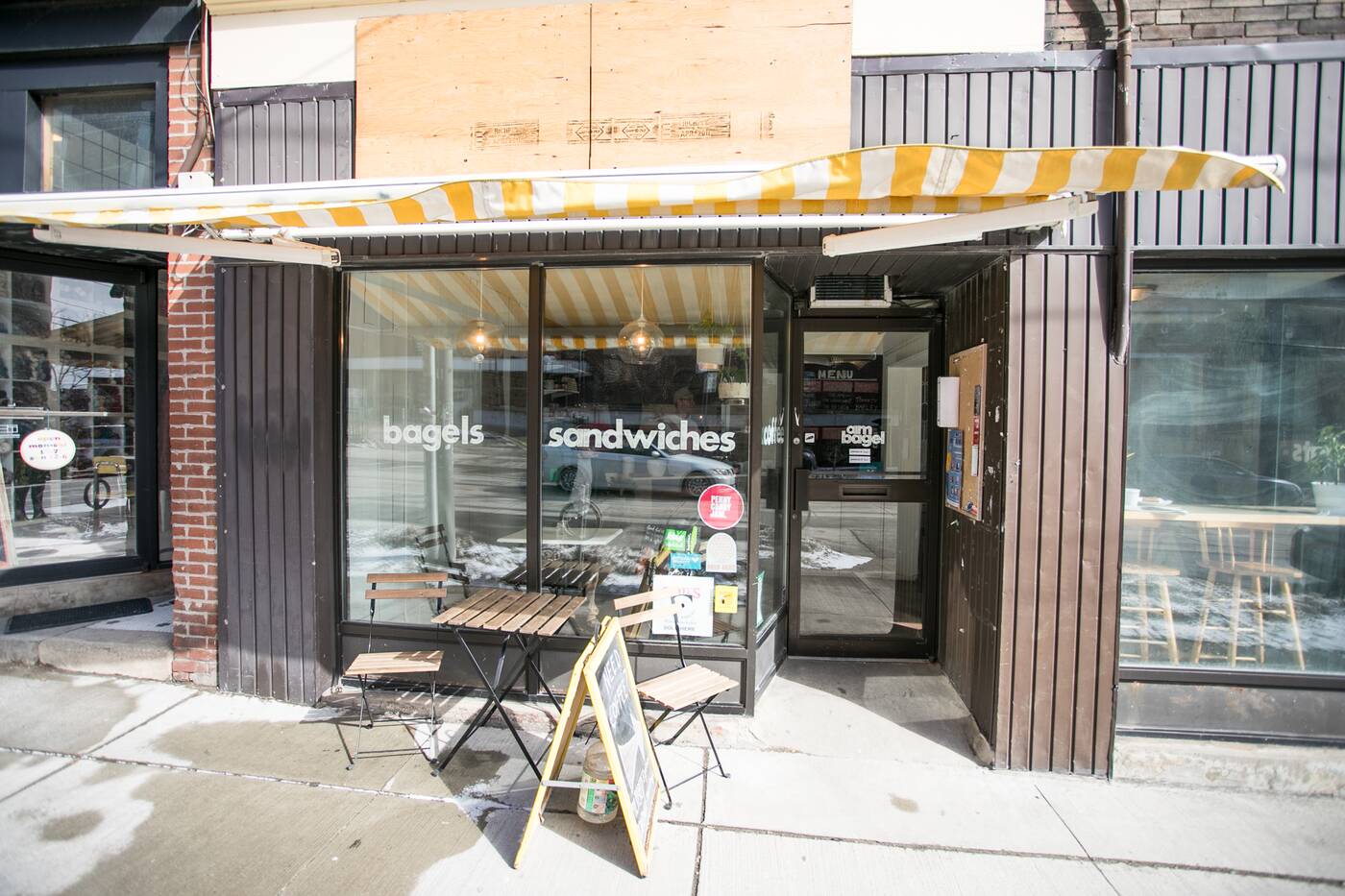