Will the Annex benefit from Queen West's indie demise?

It's an old story by now. Queen West just ain't what it used to be. First it was Bakka Books (now moved to Harbord Street), followed by places like the BamBoo, the 360 and, of course, Pages — all former mainstays on the strip. Most recently, the Sliver Snail announced that it'll be heading elsewhere sometime next year. Of these Queen West losses and defections (there are many more one could name), the latest might be the most telling because skyrocketing rent hasn't been cited as a major factor. According to Silver Snail manager George Zotti the street just doesn't feel like home anymore.

There are other reasons, to be sure — owner Ron Van Leeuwen is retiring and selling the building — but Zotti, who has agreed to purchase the business along with partner Mark Gingras, thinks it's time to move to an area where there's more of a community of independent retailers. "We've been thinking about moving for a while. Queen West just doesn't have the counterculture appeal it used to," he told me over the phone last Friday.

At this point, there's probably not much need to corroborate his claim. The rise of big retail on the strip has been a long time coming, and the proclamations of the death of Queen West are as well documented as they are predictable. As Zotti says, "a scene like the one Queen used to have eventually attracts the mainstream."

Perhaps more interesting is the desire to try the Annex as a future location for Silver Snail. Although it's still a long way off, when the store does eventually relocate — and, just to be clear, at no point will it be closed — this is the neighbourhood Zotti has set his sights on. "The Annex just feels more like Queen West used to be. There are lots of book stores, U of T is there, and you have the high school kids as well. Silver Snail would fit in." 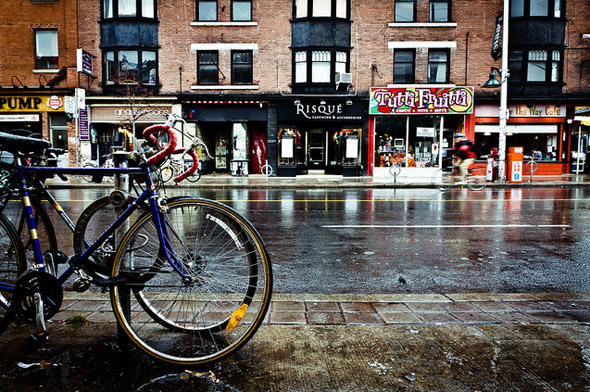 As much as I think that last bit is true, it's not as if the Annex hasn't been accused of becoming too corporate itself. Having more to do with fast food joints than the retail/fashion sphere, it's still pretty common to hear people lament that the Annex isn't what it used to be either. Zotti disagrees. "It's still an area that's full of small boutiques and independent stores. It has the passerby traffic that we've lost [on Queen Street]," he notes, in reference to the neighbourhood's demographic more than just the number of pedestrians out on the street.

Who knows, maybe there's a bit of an independent resurgence in the cards for the Bloor Street strip? It's tough to call a trend based on one store's desire to relocate, but the replacement of Burger King with Guu SakaBar is surely a positive sign as far as the food scene goes. And, unlike Queen West, independent businesses along Bloor have proven more resilient to a corporate presence in the area.

At a minimum Zotti's desire to relocate the Snail is discussion worthy. Will Queen West become even more of a tourist-only zone than it is today? Does the Annex have enough of the counterculture vibe Zotti speaks of? Will other established indie businesses look to Bloor as a possible home? The Snail's future plans engender more questions than answers, but the very fact that they're being posed is as much an auspicious sign for the independent vitality of the one area as it is more doom and gloom for the other.

Photos by Fuzzy Rixard and Ronnie Yip in the blogTO Flickr pool.