Over and above the photographic holdings at the City of Toronto Archives, the best representation of the changing nature of this city's streetscape over the last 30 years or so is surely the work of Patrick Cummins. A photographer with a keen eye for minor architectural details — be it alterations to signage or the makeshift renovations that tend to accompany a building's change in ownership — his images subtly capture the ebb and flow of our city's existence, right down to its weather and economy.

For the last few years the best way to get a sense of Cummins work was to pay a visit to his Flickr photostream. While he has exhibited periodically in galleries, in the absence of a full-blown retrospective, there was really no way to get a sense of the scope of the photographer's body of work and the profound insight it offers into the nature of Toronto's urban character and development. 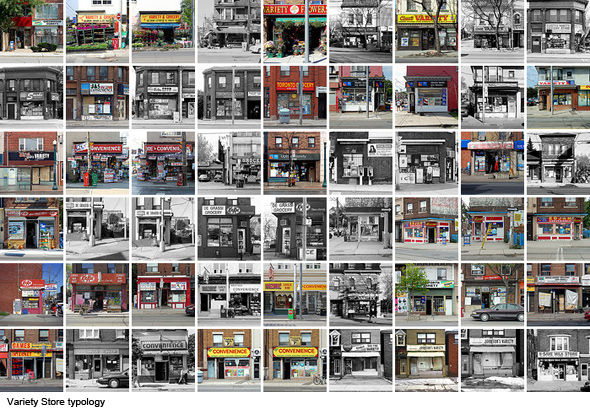 With the upcoming release of Full Frontal TO: Exploring Toronto's Vernacular Architecture that has changed. A must-have book for the Torontophile if there ever was one, Cummins photos — now accompanied by intuitive text from Shawn Micallef — are given the treatment they've always deserved.

Whether it's the typologies of gothic cottages, variety stores, and back-alley garages or the juxtaposition of buildings like 140 Boulton Avenue over a 25 year period, the way the photographs are laid out in this edition serves only to illustrate further the programmatic nature of Cummins' body of work. This is anything but a random collection of photographs, but instead highly organized documentation of the figurative marrow that makes up the bones of this city: its often under-appreciated vernacular architecture. 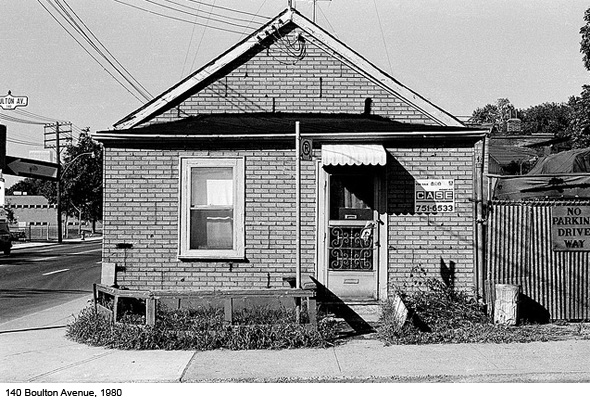 The marriage of Cummins' photographs with Micallef's words is about as natural as these things get, and for good reason: there's probably no one better suited to the task of introducing and captioning these images than the Stroll author. In fact, I'd suggest that in a certain sense, Full Frontal TO and Stroll are companion texts, one invested in visual documentation and the other in textual description.

Conventional wisdom dictates that Toronto lacks the photographic heritage of cities like New York and Paris. While there's some truth to this — we are, after all, a younger city than both of these places — Cummins is very much our own EugÃ¨ne Atget. The great Parisian photographer wasn't much interested in shooting sweeping panoramas of the city from the top of the Arc de Triomphe, but instead chose to focus his energy on storefronts and faÃ§ades, the everyday architecture through which the core character of the city is revealed.

This is also the story of Cummins photographs. Seldom beautiful by most standards, they nevertheless fascinate in their ability to show off what an adaptable and ever-changing city Toronto is. As Micallef writes in the introduction, "this is the Toronto we know and have known, even if we didn't know it."

Full Frontal TO is set to be released on May 9th by Coach House Books. An opening reception will be held that evening at Urbanspace Gallery (7 p.m.).