Glad Day is also experiencing new life. In January, the bookstore's fate was bleak. Thanks to 22 new co-owners who took over in February, the world's oldest LGBTQ bookstore launched in a new direction. These days, the store is fostering a community space with its new third floor programming room, formerly occupied by another tenant.

Glad Day 2.0 - as the new team have nicknamed it - has now hosted numerous readings and discussions. During this year's Pride, the store revived and became the new home for the Proud Voices literary series, formerly run and subsequently discontinued by Pride a few years back. The programming, it seems, is bringing in new and lapsed customers.

Sarah Suh, 30, heard about the Dan Parent event through Facebook. "I wasn't even aware of this store. I just pass it all the time - I have a lot of gay friends, so I need to tell them about this store," she says.

Trevor Scanlan, 46, is reacquainting himself with the store through their programs. "When I was coming out, the idea of Glad Day was to have it feel connected to the community," he said after the Parent event. "The programming now brings back that community feeling." 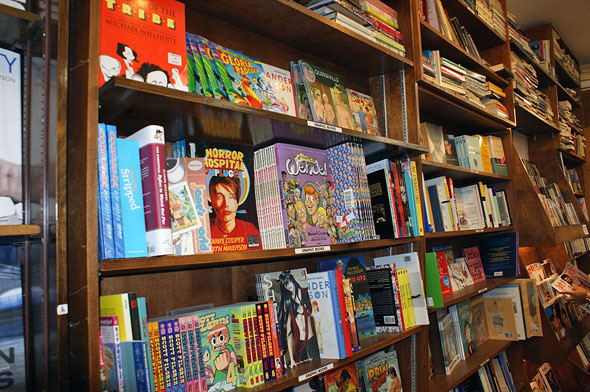 The owners also made changes to product offerings and store layout. Titles for women, multicultural audiences and even comic geeks are more prominent. Shelf space for titles of interest to the trans community have increased four-fold.

Manager Scott Dagostino says the store always had a steady male clientele, but was more lacking for other communities. Recent changes are helping make an impact. "Our trans titles are among the highest selling titles right now, because the need for them is great," he says.

The owners also invested in buying new inventory, a response to long-time criticism that their stock was outdated. Dagostino admits that because of limited funds, it's still a growth area. "Our biggest issue is cash flow. We want to buy every single awesome LGBT book out there, but we don't have the money and resources. So finding the middle ground is my job."

Despite the buzz, the owners are mindful of continued threats. "The immediate challenge is Amazon," says Robins. "They provide such deep discounts, free shipping and that's very attractive for people who are facing economic strife. But the problem is that Amazon is impersonal." Dagostino recounts an exchange he had with a father who came into the store. "He asked if we have any coming out books. I asked him, 'Is this for you?' It was for his son, who's 13. They're all pretty sure he's gay. The son is starting high school and he's terrified of being bullied."

The survival of independent book stores during the economic downturn is another concern. "It's catastrophic what is happening in the US. If a gay bookstore can close in San Francisco, that's terrifying," says Dagostino.

Archie Comics creator Dan Parent thinks that independent bookstores like Glad Day are still needed. "LGBT bookstores play an important role. For people who are searching for literature that relates to them, these stores would be a place to look for that," he says.

The Glad Day team is forging ahead with more programming plans. "I'm really excited about a new series called Out of the Vault," says Robins. "There are so many amazing books in the store that, in a small cramped space, they don't get the attention they deserve. So we're spotlighting different sections within a social context. The first event in September is about poetry."

While the store would like to bring in more big names like Parent, it will also continue to showcase lesser-known writers. "I just brought in a book called Cherry Blossoms by an author named Wes Funk," says Dagostino. "It's a fun Sex and the City type book. I love that there's a queer guy in Saskatchewan writing this kind of book... Over time, people can see that Glad Day can also be a place of discovery and to find books that no one else has."