Where did Zanta go? Toronto's favourite shirtless wonder hasn't been seen on the streets of this city for ages. In 2007 Zanta (David Zancai) retired to Brampton after running into trouble with local authorities and spending time both in the Don Jail and the West Detention Centre. He was described as "probably a public nuisance" by Adam Vaughan and was banned from Taste of The Danforth, Yonge-Dundas Square and the Santa Claus Parade. 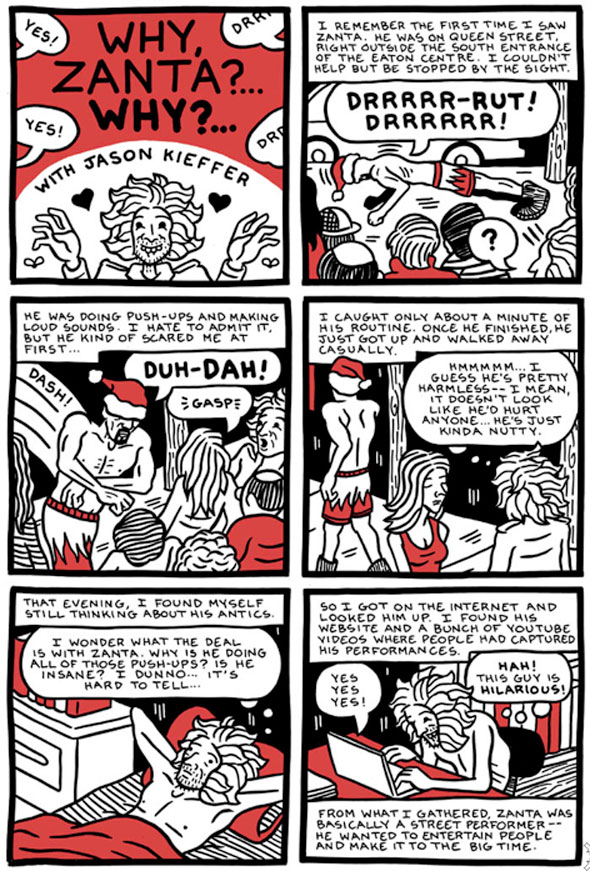 Zanta had aspirations for running for Mayor of Toronto in the coming municipal election. But so far, despite a flurry of activity from 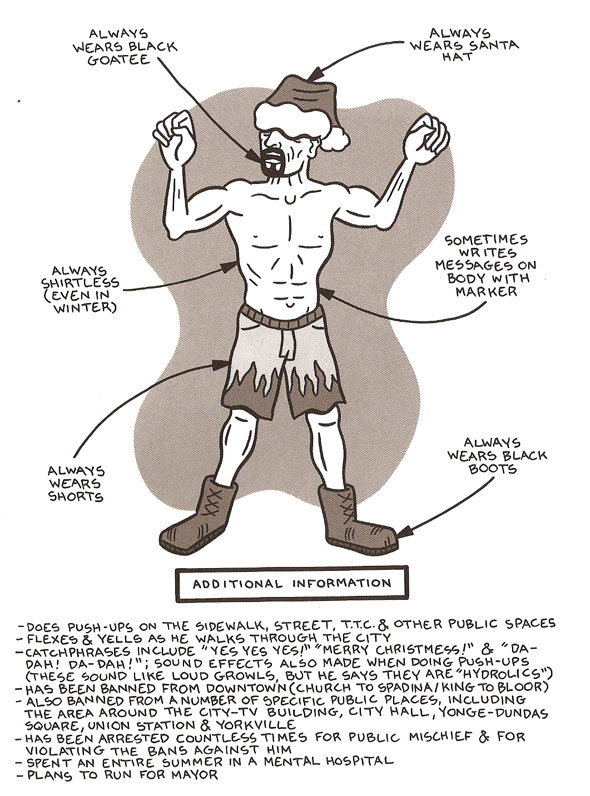 other contenders, Zanta has yet to officially throw his hat in the ring.
But one man, Jason Kieffer, doesn't want us to forget about the Yes! Yes! Yes! man. Kieffer is currently working on a 50 page comic book about Zanta expected to be completed later this year. And in December Kieffer published both a Zanta comic (see above) in the latest issue of Taddle Creek as well as a caricature (see below) in his new book called the Rabble of Downtown Toronto currently available at the Beguiling or online.For long time readers of this site, the drawings in the Rabble of Downtown Toronto might look familiar. Back in 2007 Kieffer was a contributor to blogTO (see his posts here) when he first started sketching hobos, vagrants, bums and the alternatively marginalized. In this new book Zanta is merely one of 40 such recognizable individuals. For a sample of other caricatures check out this PDF posted on Kieffer's web site.

I met up with Kieffer last week over coffee at one of his regular hangouts. He showed me his in progress manuscript for the 50 page comic but admitted to not knowing much about what Zanta has been up to lately. One thing's for certain though - It would make a nice photo-op to have both of them signing copies of Kieffer's comic when it's finally published.

Is Zanta back in Toronto?
Zanta's plea to the Chief of Police
Zanta Says Merry Xmas

And, for your viewing pleasure, the Zanta documentary: