Nu Bugel opened its doors this week after months of delays, finally bringing one of my favourite breakfast foods to Kensington Market . 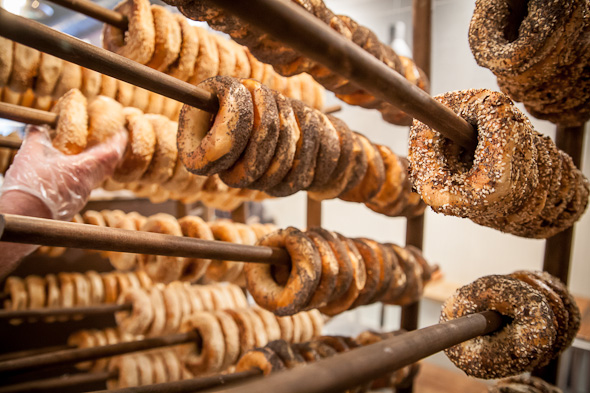 Admittedly, I am a bit of a bagel aficionado. Growing up, my family only had one Sunday morning tradition and it involved a walk to Kiva's , or a drive to grandma's hitting Gryfe's on the way. Later, a brief stint living in Montreal's Mile End won my allegiance to the chewy, boiled variety, but ultimately it's not so much the bagel that I crave, but rather the lazy ritual of a morning walk rewarded by carbs, cream cheese, and coffee. Until recently this was not an experience available in Toronto's downtown core. 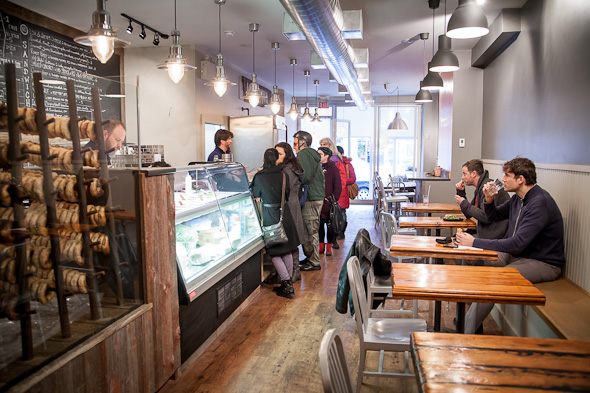 As it turns out, it was no easy feat. Co-owners Roberto Iglicki, Juan Hernandez and Shahzad Khuram had to reinforce the foundation when building the 20,000 lb wood burning oven onsite, which is essential for giving these Montreal-style bagels their signature earthy flavour and hard crust. 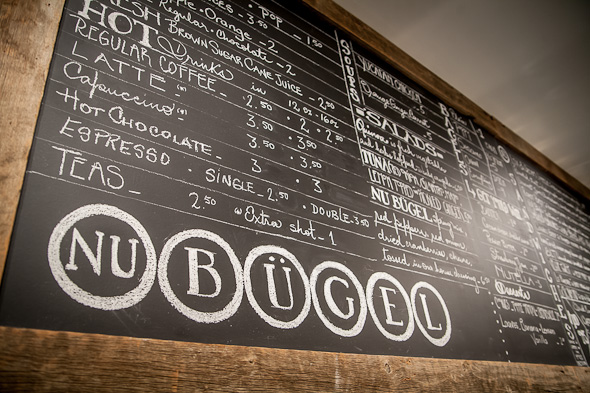 The bakery cafe takes over the space formerly home to the Kensington Clothing Company and the transformed interior nods to its past life with adornments like the original signage (or at least a piece of it), and an antique Singer sewing machine serving as a milk and sugar station. The atmosphere is only missing one thing: the smell of the wood burning oven. 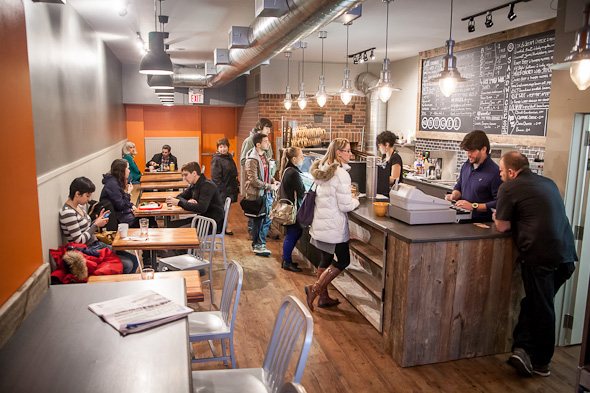 Integral to my ritual (and the entire reason I've been looking forward to Nu Bugel's opening) is ordering a bag of bagels first thing and eating one while the doughy middle is still steaming, preferably before you even make it out of the store. 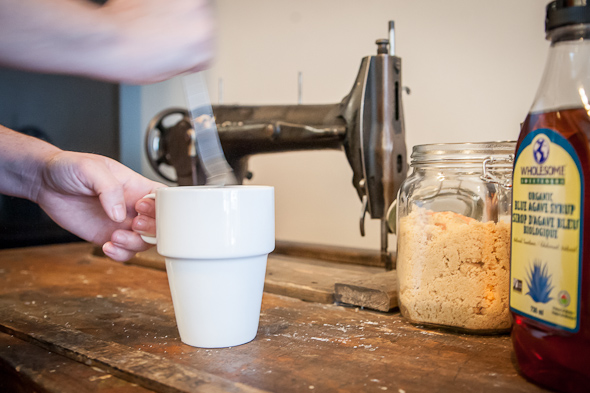 Sadly, on entering Nu Bugel I knew this wasn't going to happen; a large batch baked earlier was skewered on display, but the wood burning oven wasn't even on. My fears were quickly confirmed when my half dozen ($5) bagels were handed over cold - though I'll forgive it this once, with the hope that once they gain a little momentum, those ovens will be firing all day long. 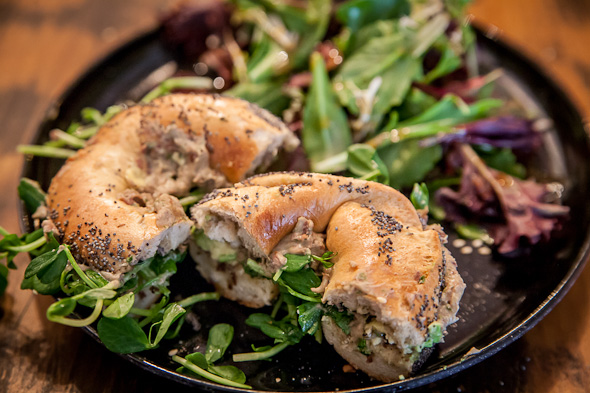 The large blackboard menu is extensive and a little chaotic. In addition to soups and salads, there are a dozen sandwiches on offer like the Exotic Avocado ($6.50), which features spicy black bean hummus, avocado, and pea shoots between your bagel of choice. Its not the most attractive sandwich, but it's tasty, and a nice vegetarian option. 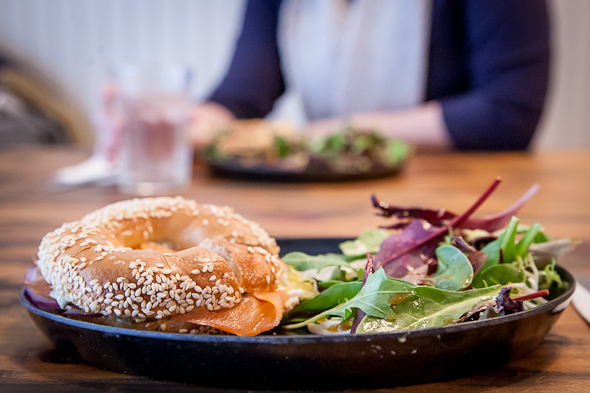 The Lox and Cream Cheese Sandwich ($8) is of course the traditionalists' choice and comes served with customary red onion slices and an added twist of lemon caper aioli. For me, the additional creamy component of aioli isn't necessary and it doesn't deliver the intended zing that lemon and capers promise. Though I'm not convinced its an improvement on the classic, it does hit the spot. 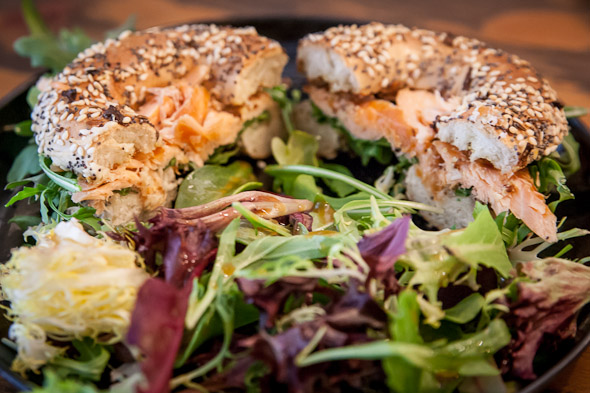 The Smoked Trout Sandwich ($8) features flaky fish from Oakville-based The Smoke Master, and comes gussied up with horseradish jelly and mustard. The strong flavours are inventive but don't really do each other justice. I've never felt so strongly conservative and I find myself wishing I had stuck to tried and true classics like the smoked meats supplied by what's arguably one of Toronto's best delis, Moe Pancer's .

Though I'm glad to have tried Nu Bugel's cafe offerings, I'll likely stick to take-away on future visits. The bakery is open (every day but Monday) 11am to 6pm, and if their first weekend was any indication, line-ups are to be expected. 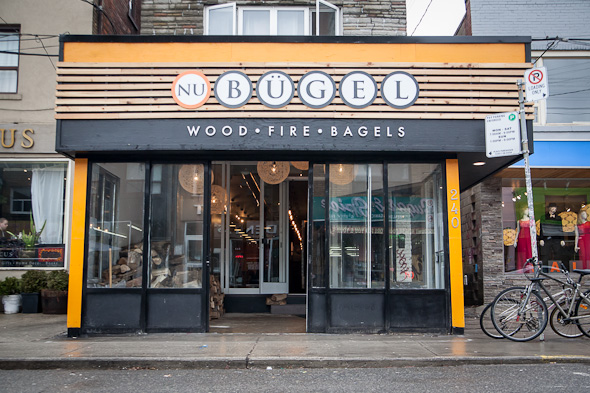