Millie Patisserie & Creamery is the sister shop to Millie Creperie in Kensington Market. Located on a small side street off Spadina just north of King West, this place specializes in French-inspired pastries with Asian flavours.

With more room to work with than its Kensington sibling, there are a few tables and chairs here for those who want to stay and indulge in their dessert, possibly while pretending to be at a chic cafe in Paris or Tokyo. 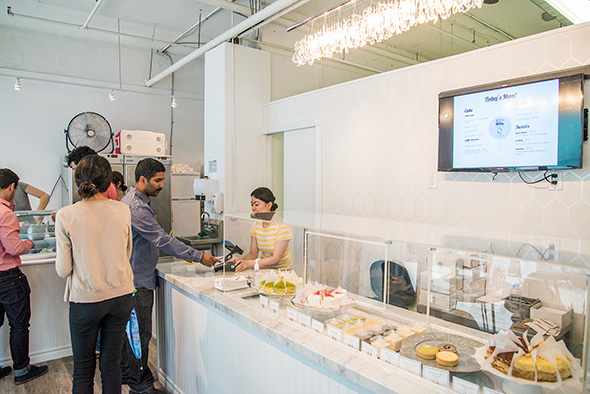 Upon entering the bright, predominantly white space, the first thing that draws me in is the display case filled with tempting-looking treats in pretty pastel colours. More on those later. 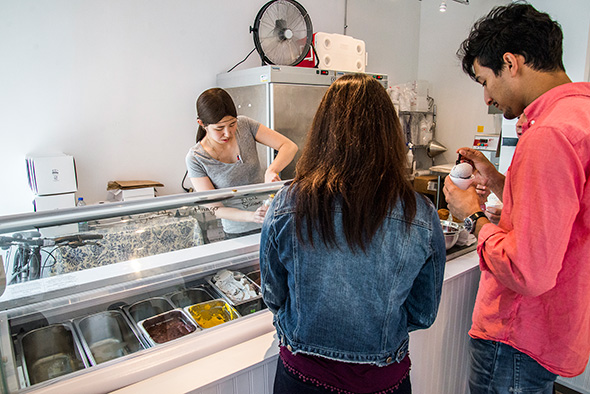 To the left, Millie lives up to the "Creamery" in its name with house-made gelato (single scoop, $3.76; double, $5.31) in flavours like black sesame, mango and matcha milk, as well as Thai ones inspired by a collaboration with Khao San Road : Thai iced tea (custom made for KSR's sister resto, Nana ), pandan and coconut. 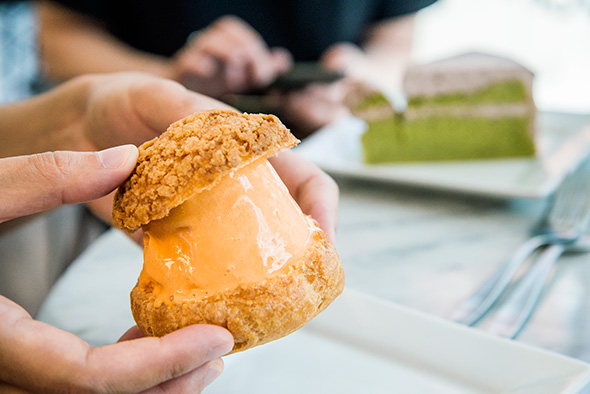 Unlike the Creperie, thin, crispy crepes are not an option as a serving vessel for gelato here - instead, you can have a cream puff sandwich ($4.42) made with your gelato flavour of choice.

My companions and I try one with the Thai iced tea flavour, and although it's tricky to eat without drippage (gotta eat it quickly!), the choux pastry has a satisfying crunch to it and the gelato tastes as advertised - sweet and creamy strong black tea with a hint of spices. 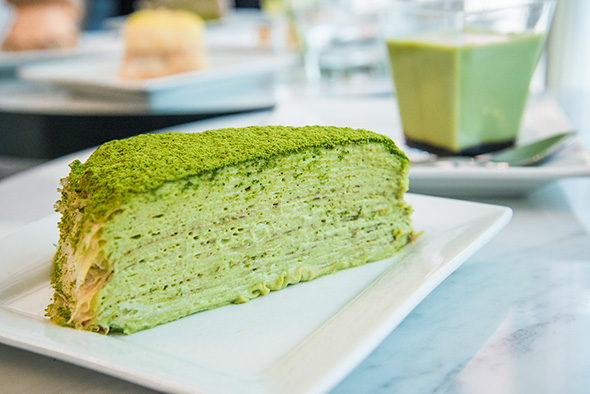 If you do have a craving for crepes, the popular mille crepe cake is a carryover from the Creperie. The labour-intensive cakes consist of 20 to 25 layers of delicate crepes alternating with flavoured pastry cream, and are available by the slice in flavours that include vanilla bean ($7.10), matcha ($7.74), tiramisu ($7.74) and champagne & strawberries ($8.18).

My personal fave, the champagne & strawberries crepe cake (mmm...booze) contains artisanal jam from Parkdale's Kitten and the Bear , as does the strawberry shortie Japanese-style cheesecake, which is among Millie Patisserie's new offerings not available at the Creperie. 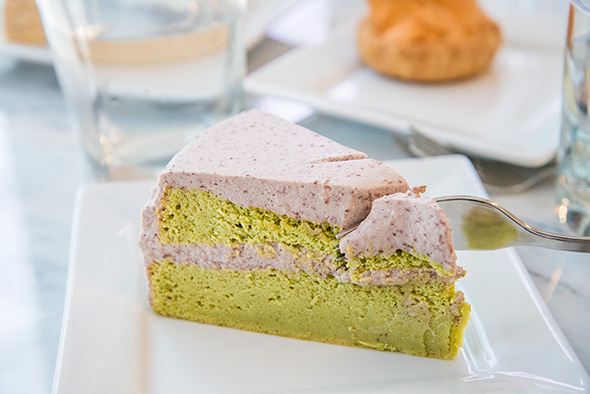 These cheesecakes ($5.95/slice) are not-too-sweet, light and souffle-like with a subtle cream cheese flavour, and in addition to the strawberry shortie, there is also a matcha azuki version with red-bean-paste buttercream between layers of green-tea-infused cheesecake. 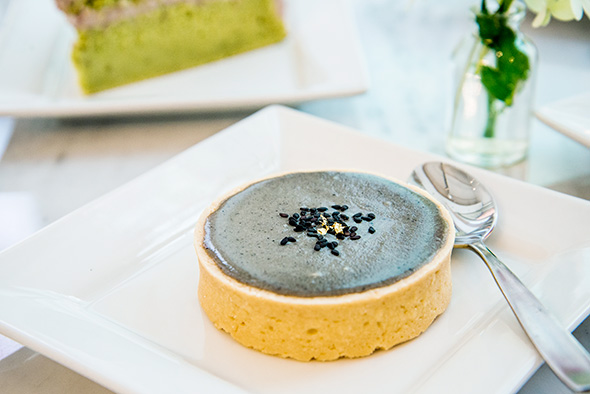 Rare cheesetarts ($5.75 each) are another new addition, and come in matcha, black sesame and vanilla bean flavours. They're "rare" because the filling is made to be a bit runny in the centre, providing a nice textural contrast with the crisp pastry tart shell. 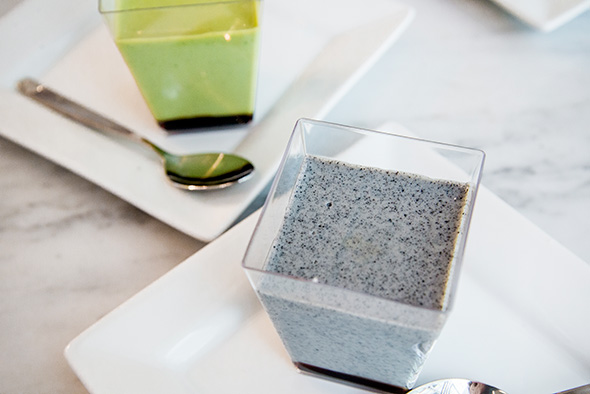 There are also inverted crĂ¨me caramel-like pudding cups ($4.87) with black-sesame-, matcha- or vanilla-bean-flavoured custard over a thin layer of caramel sauce on the bottom as well as a refreshing yuzu mousse topped with yuzu honey jelly ($5.30) aptly dubbed "Yuzu Delight." 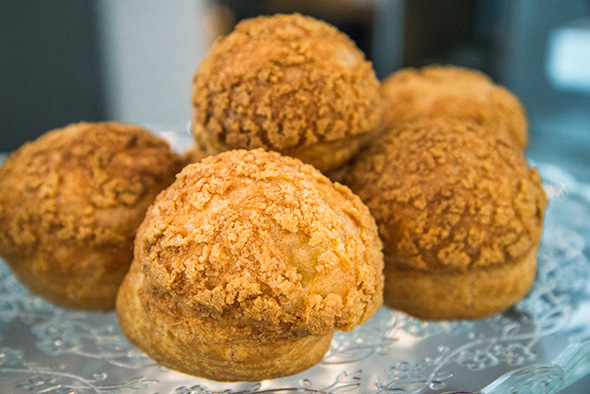 Everything is made in the back area of this patisserie and creamery, and it's the HQ for experimentation of this expanding operation. Upcoming developments? Nutella-banana flavoured sweets and savoury fillings for items like cream puffs and quiche.

This is definitely a different area from Kensington, and it'll be interesting to see how it takes to this new addition. Since it's slightly hidden away, it's unlikely you'll come across it unless you're looking for it specifically, live in the building or the condo across the street or work nearby. Those who do stop in sure do seem excited to see it there though (including me). 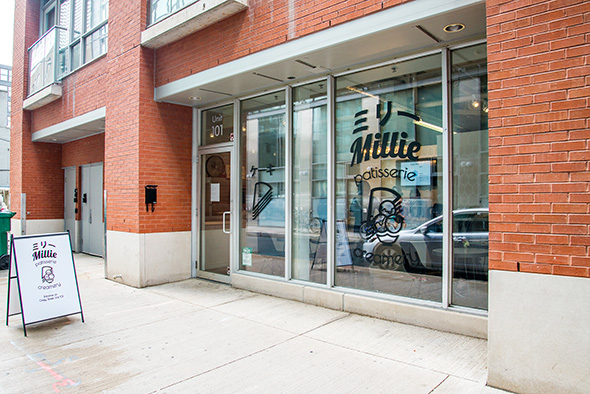 The Best Crepes in Toronto