Lamanna's Bakery blends old world tastes of Sicily with show-stopping foods best fit for the 'gram when it comes to their long list of offerings.

The family-run business is the obvious hot spot of the low-key shopping plaza it resides in, mostly due to its big slice, which has more Instagram star quality than any other pizza you'll come across. 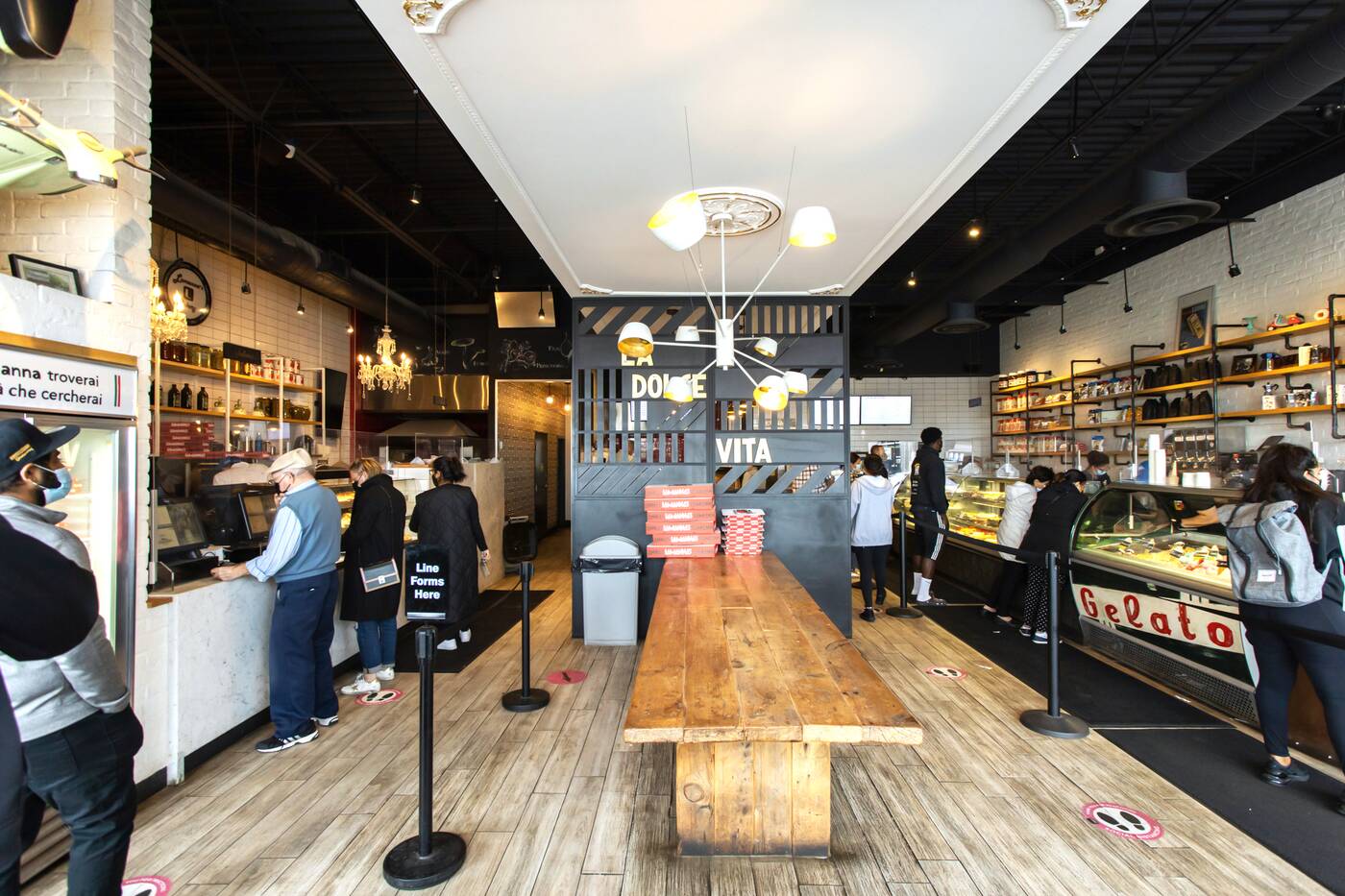 Before the two-foot piece of za came into the picture though, the bakery was drawing lines over its 17-year run for the more traditional Italian eats of homemade lasagna, sfogliatella and ricotta-stuffed cannolis. 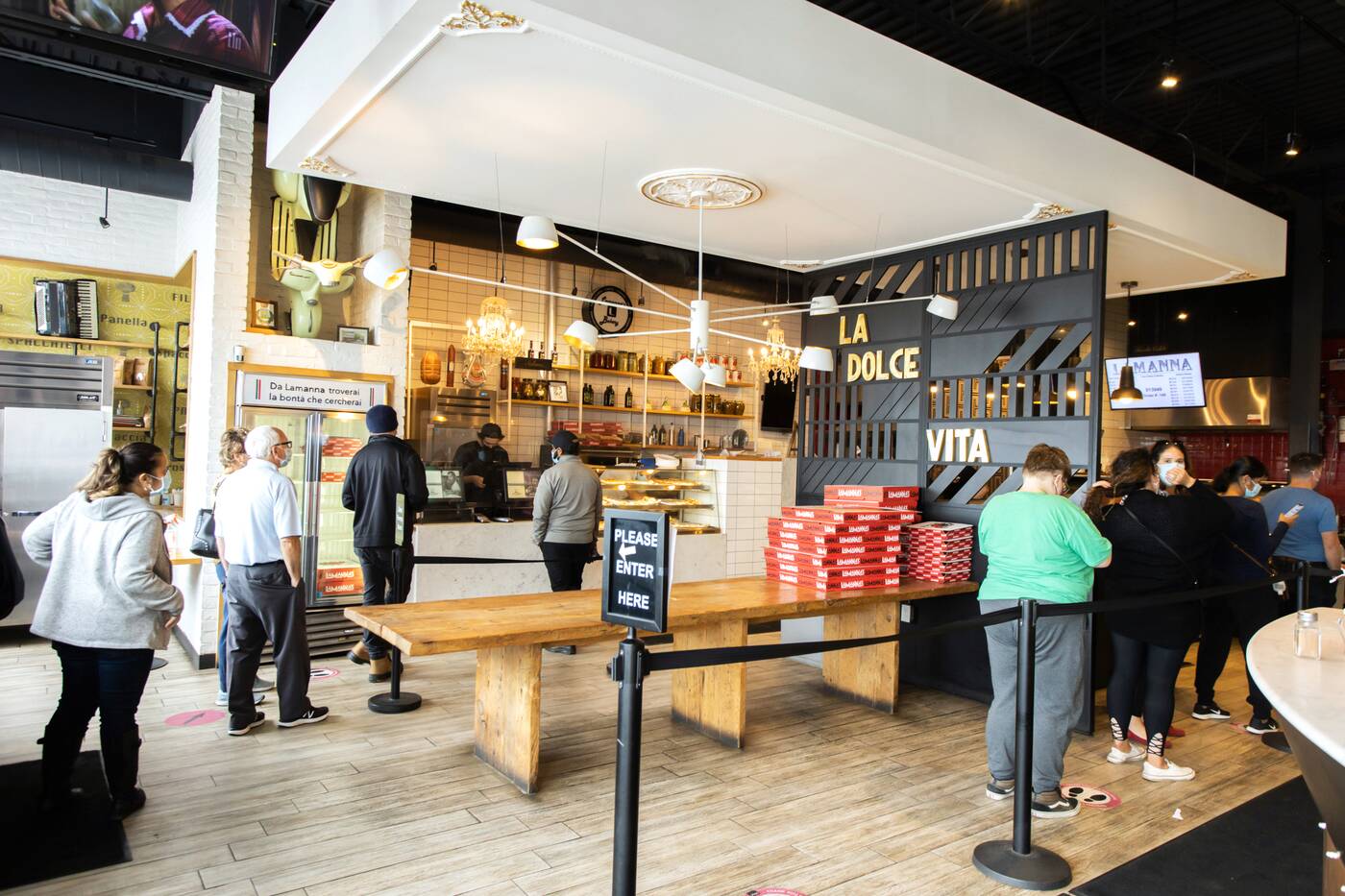 The "La dolce vita" sign (aptly translating to "the sweet life") and vintage teal Vespa hanging from the wall add to the Italian aesthetic in this market-style eatery.

Whether there to grab a quick bite at lunch or shamelessly pose with your very own pre-ordered big slice, separate queues for pizza, hot meals, pastries, gelato and espresso make it easy to grab and go. 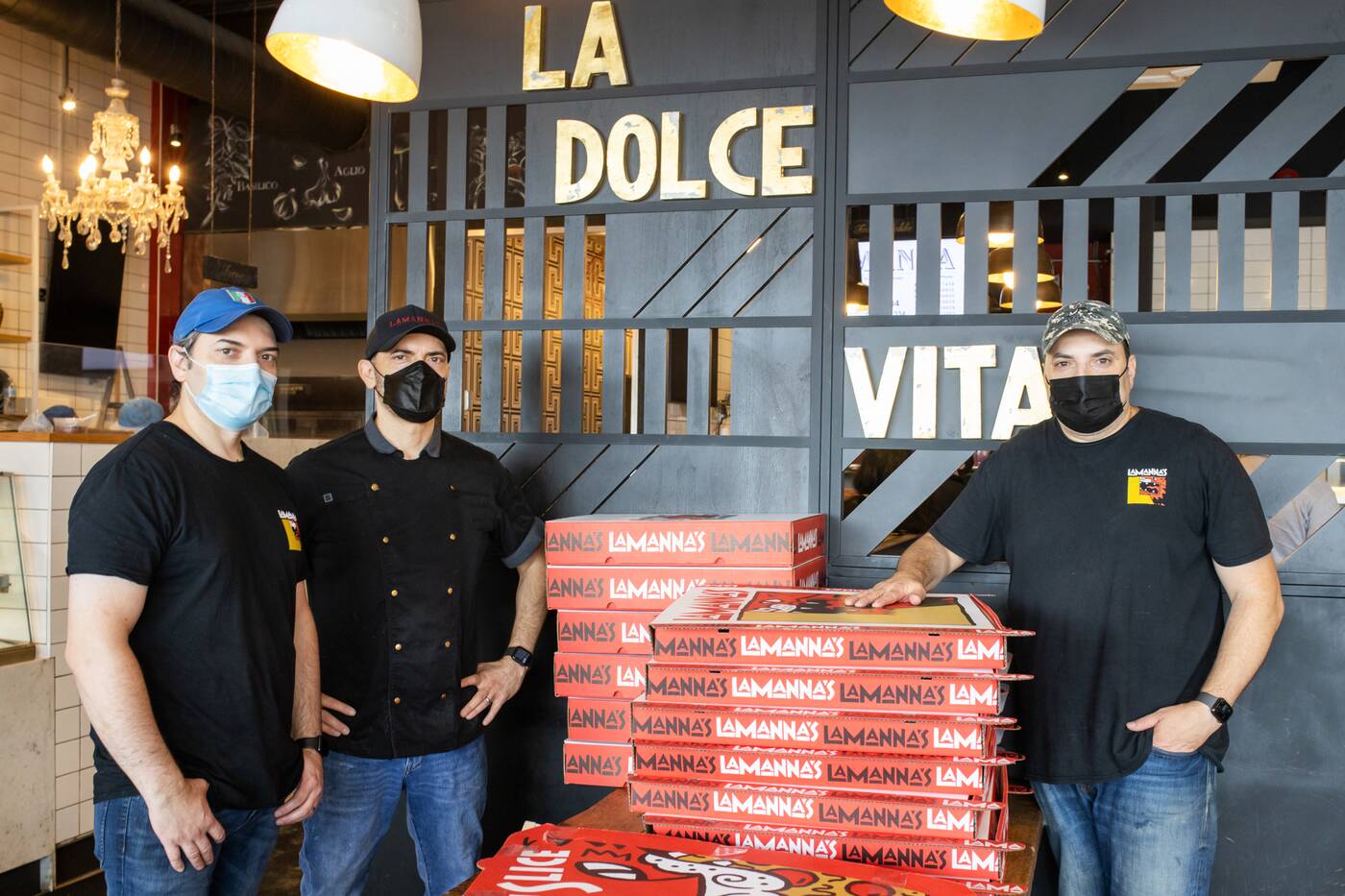 The spot is run by brothers Joe, Lorenzo and Dave Lamanna. They opened back in 2004 alongside their parents, Peter and Rosa, who moved to Canada in the 1960s and worked in bakeries their entire lives. 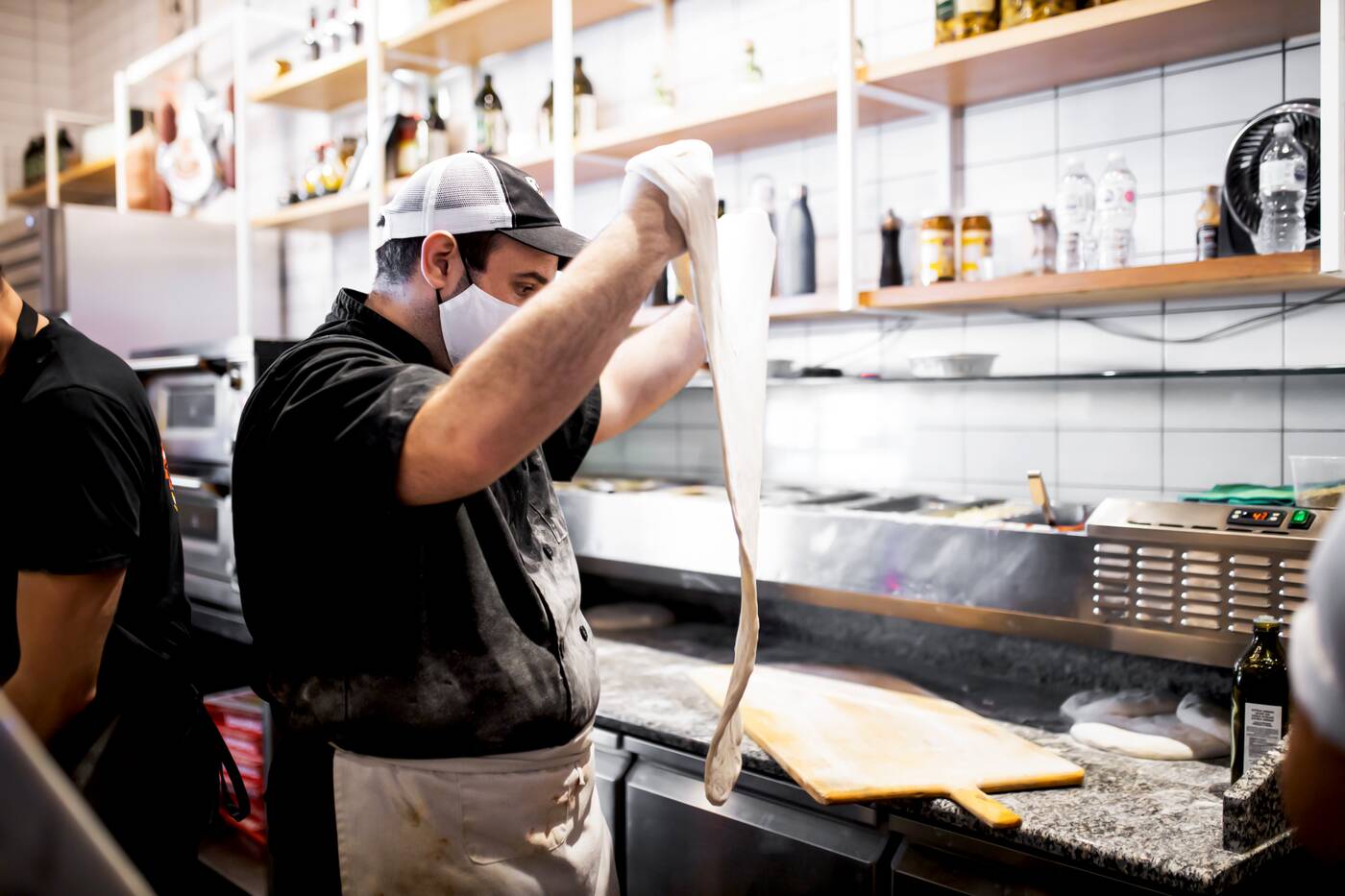 At the pizza station, pies are rolled from handmade dough in just two sizes: 21" round or the big slice, which is likely Toronto's biggest. Not much difference is required when making the latter besides carefully stretching it into a giant triangle for each slice. 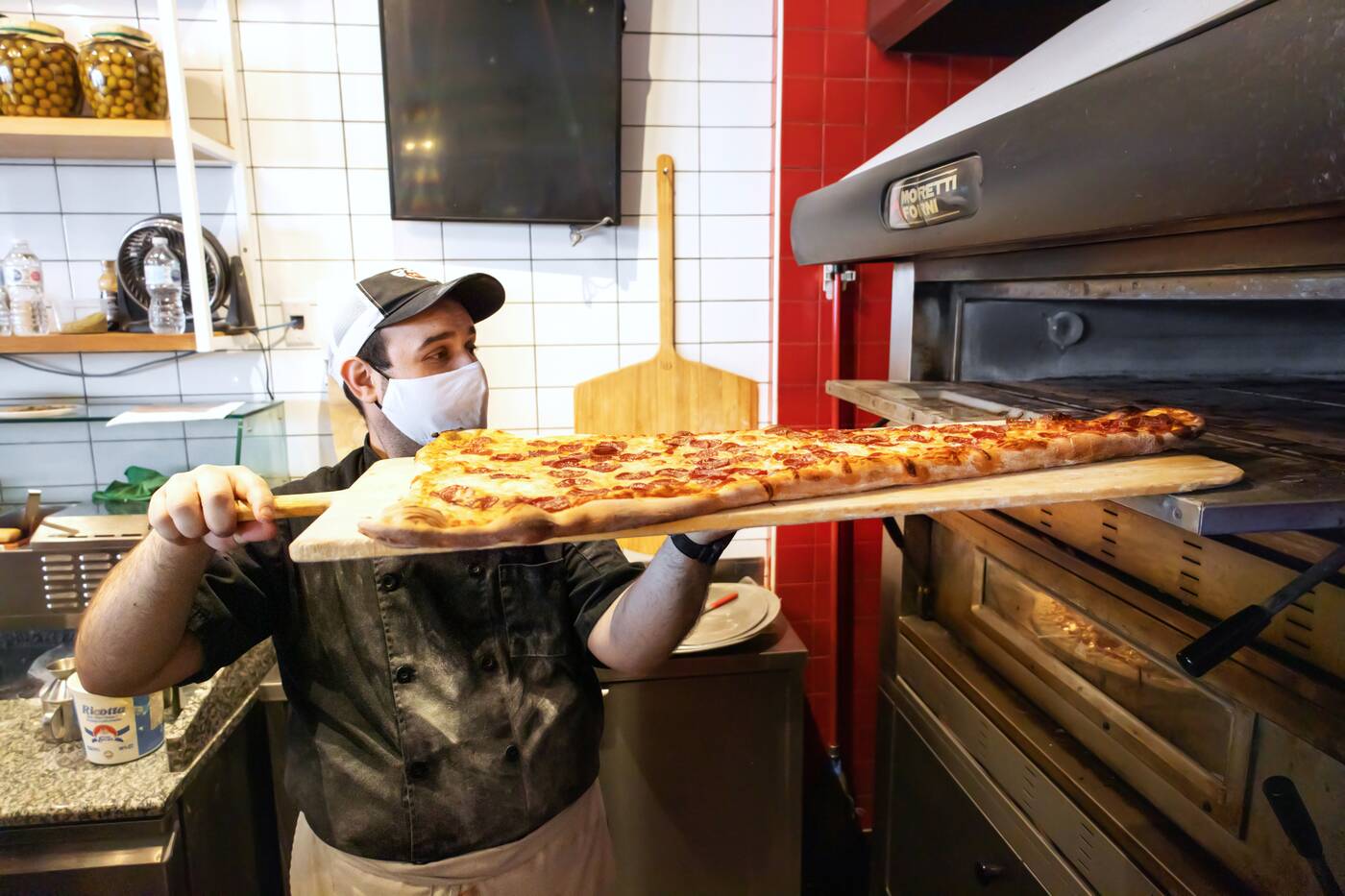 After just 15 minutes (the same amount of time as the other pies) the big slice is carried out on a massive pizza board and fit into a custom cardboard box. 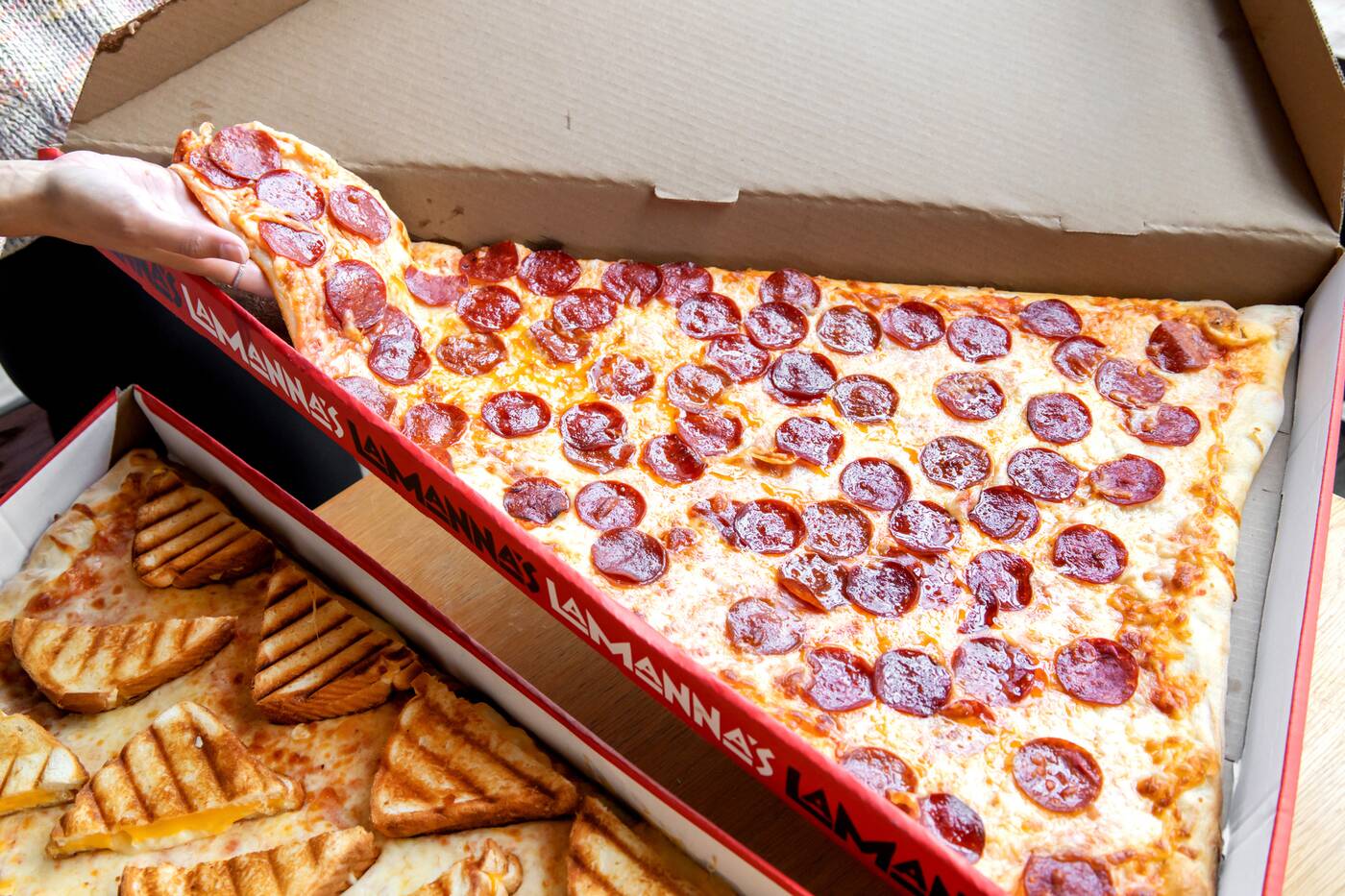 The pepperoni is the cheapest of the big slice options and will cost you just under $30. Not bad considering it carries just around 60 pieces of pepperoni and feeds about four or five. 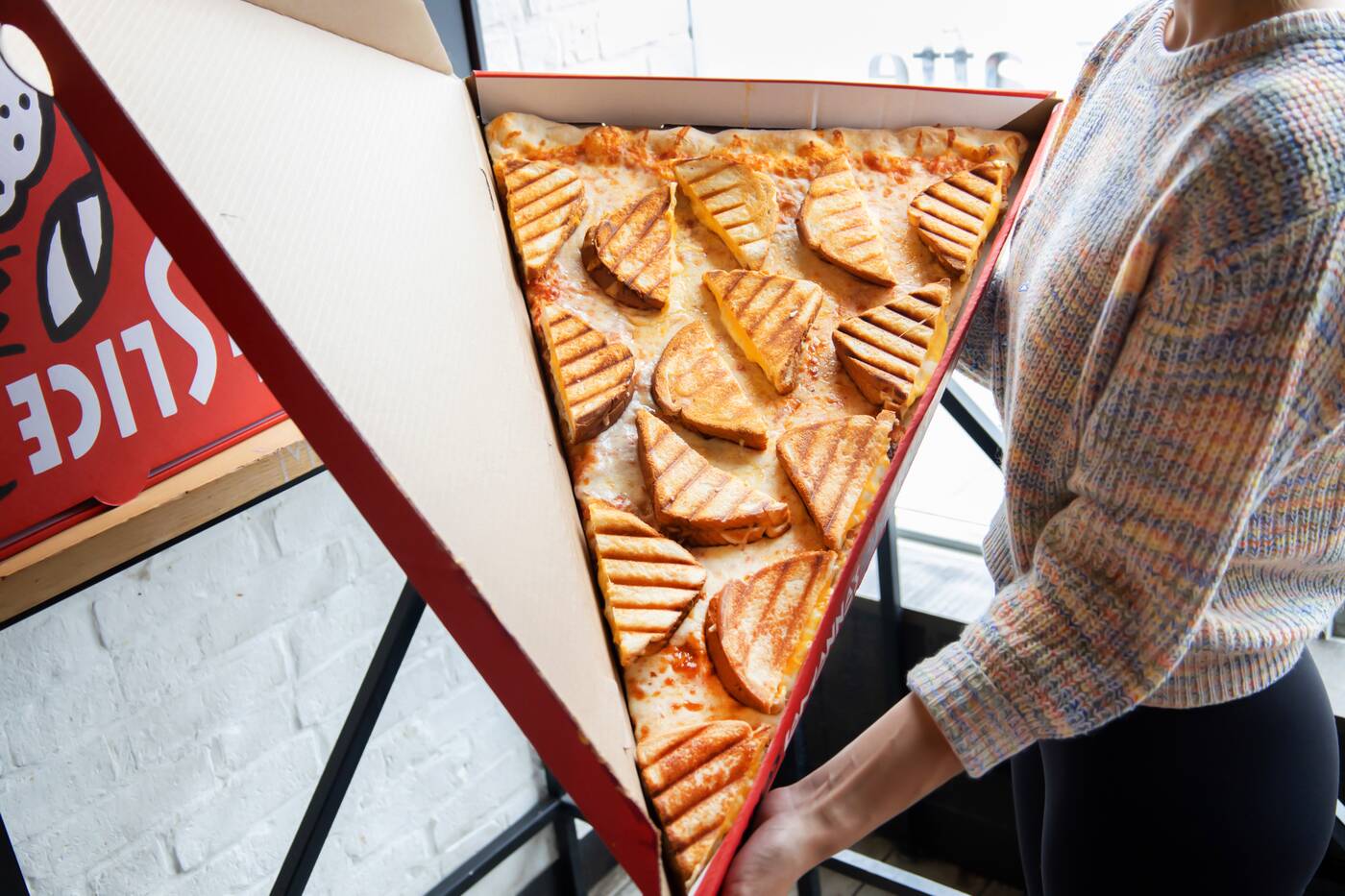 Toppings only get more outrageous from there and the pancake, bacon and maple syrup covered slice even made it into People magazine. We opt for the grilled cheese ($40), on which I count 14 half sandwiches. 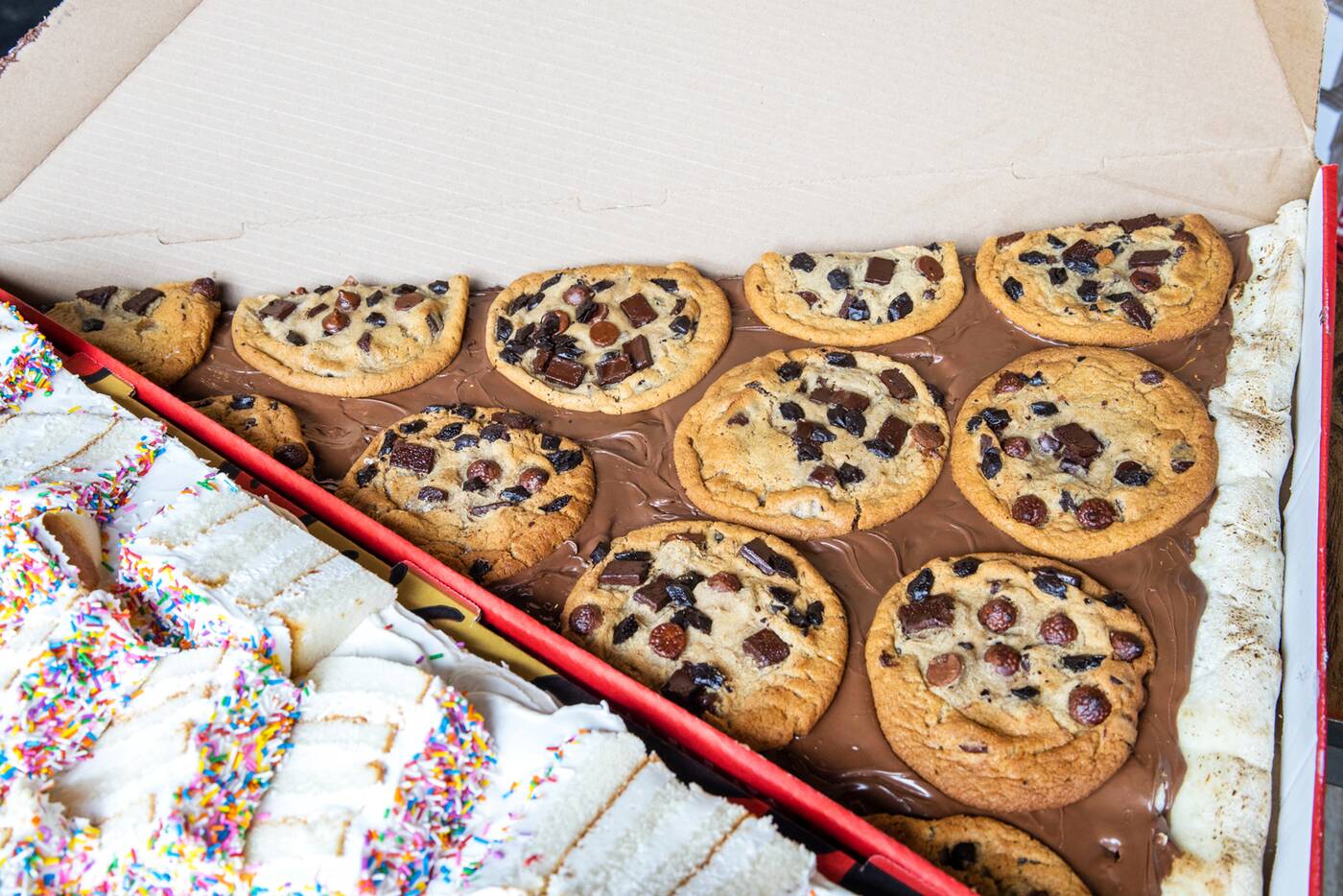 For a bit of a steeper price tag (we're talking $10 to $15 more than the pep and cheese), you can order one of the dessert slices where toppings like birthday cake and churros reign supreme.

The chocolately Nutella ($45) slice gets the bakery's signature cookies that are made with a few different types of chocolate chips. 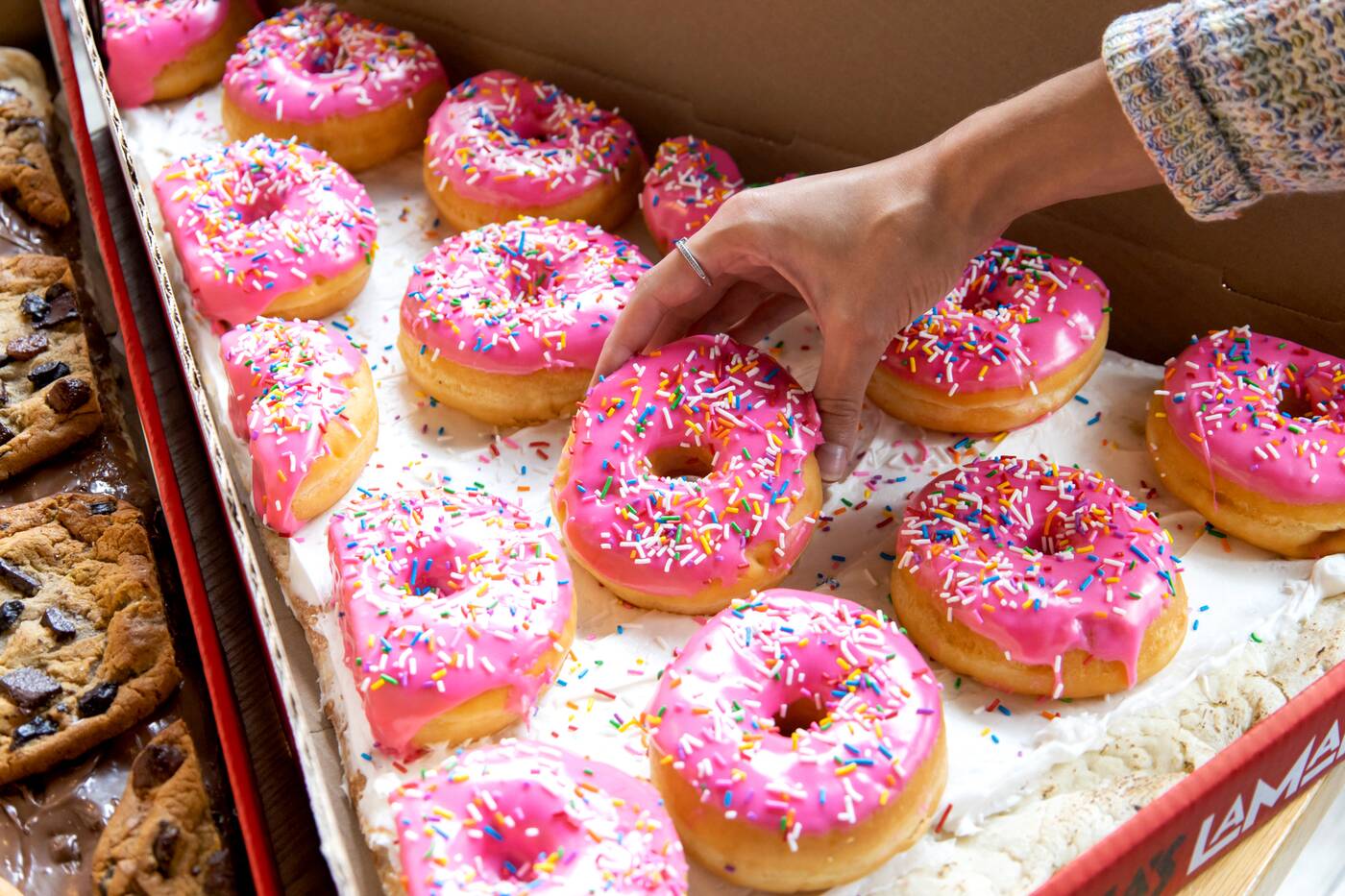 The Simpson big slice ($45) would definitely get heart eyes from Homer Simpson, covered in vanilla buttercream and pink-dipped sprinkle donuts. 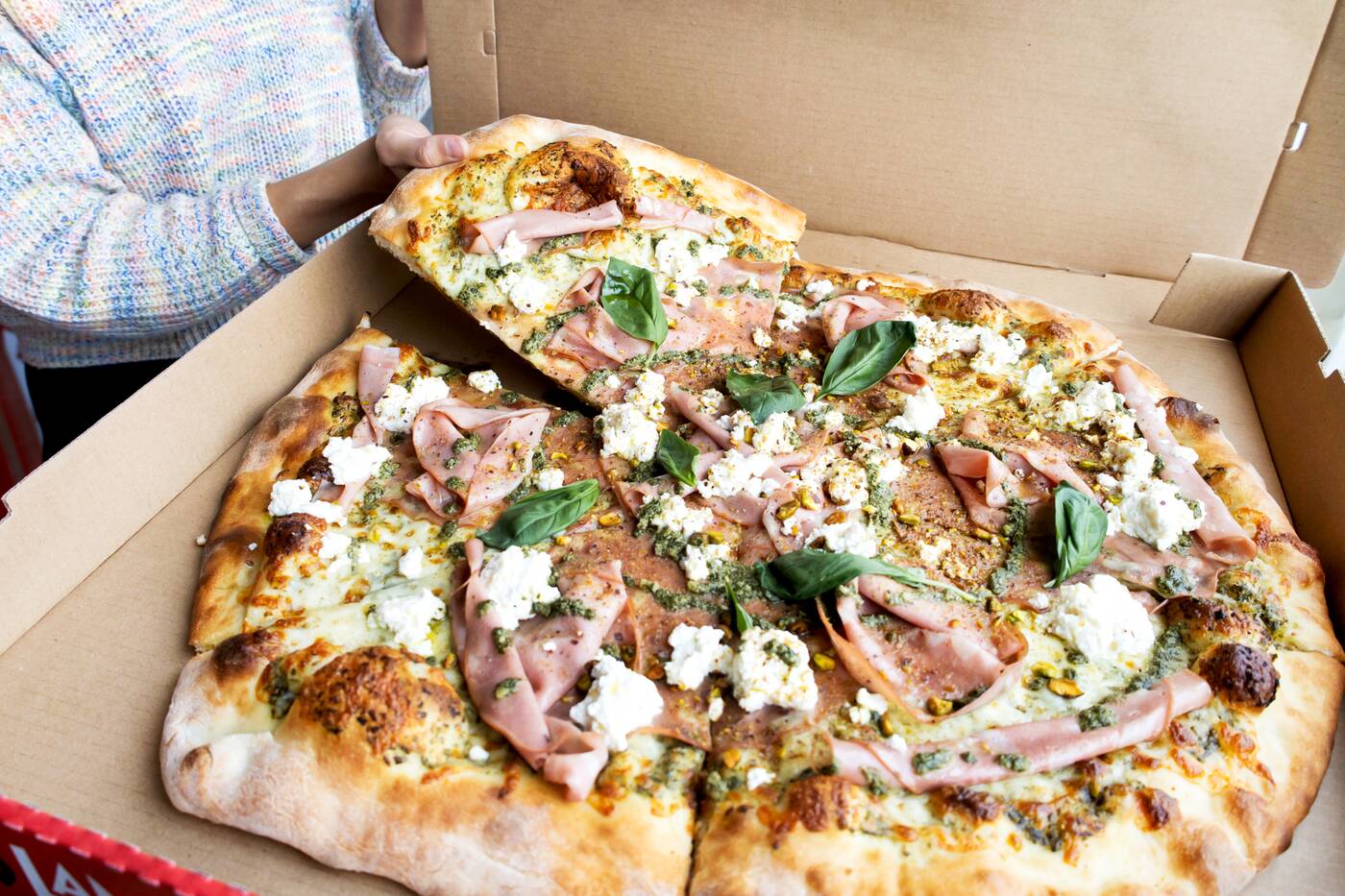 Even the regular pies are so big that one slice could fill you up for lunch. The Bronte ($38) is named after the town in Sicily known for growing some of the best pistachios. Besides that key topping, pesto, mortadella and ricotta are piled on. 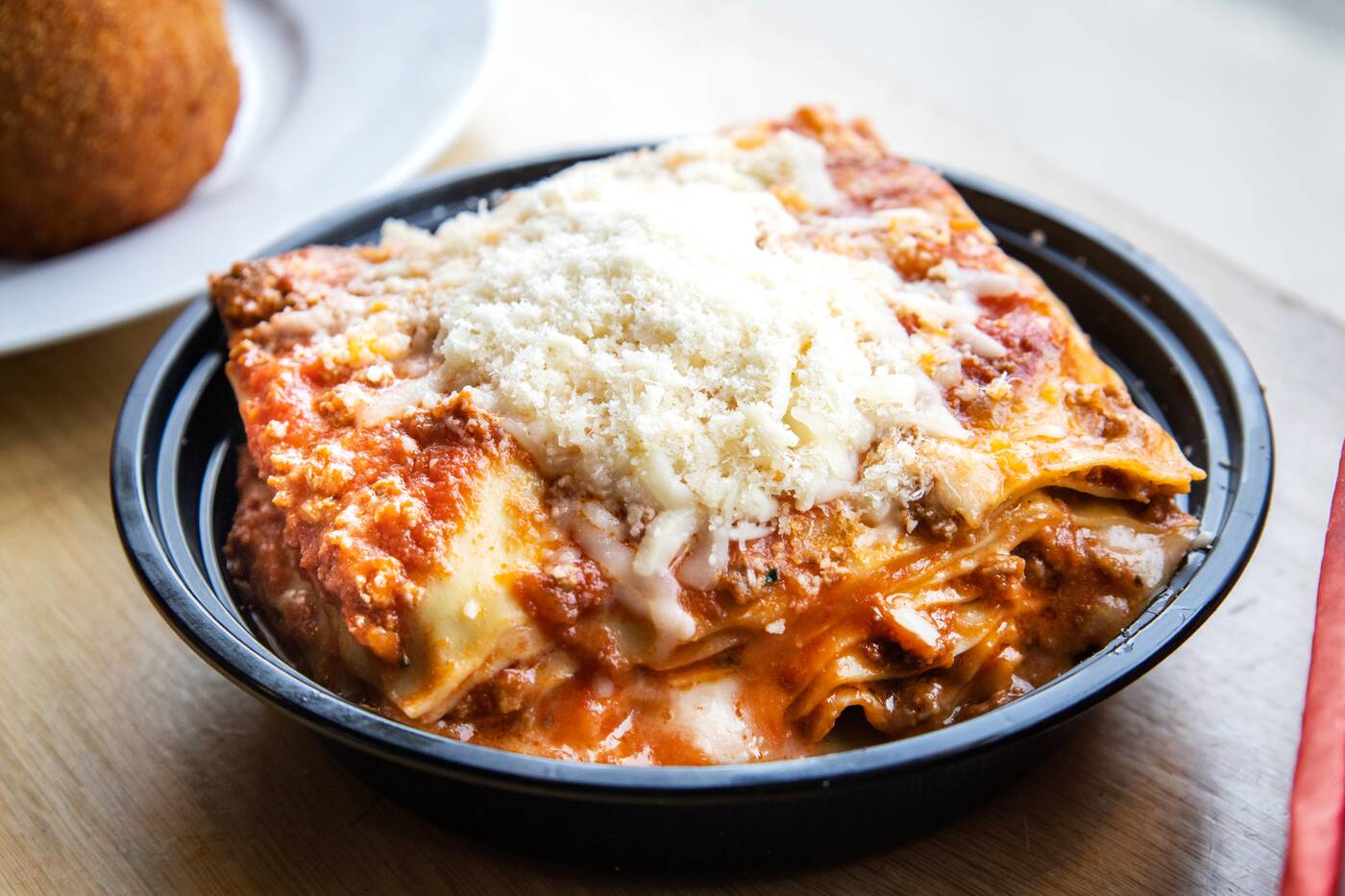 Plenty of other hot food items are behind the counter if giant pizzas don't suit your tastes like a generous portion of meat lasagna ($8.99). Its several layers feature the simple ingredients of tomato sauce, ground beef and mozzarella between sheets of fresh pasta. 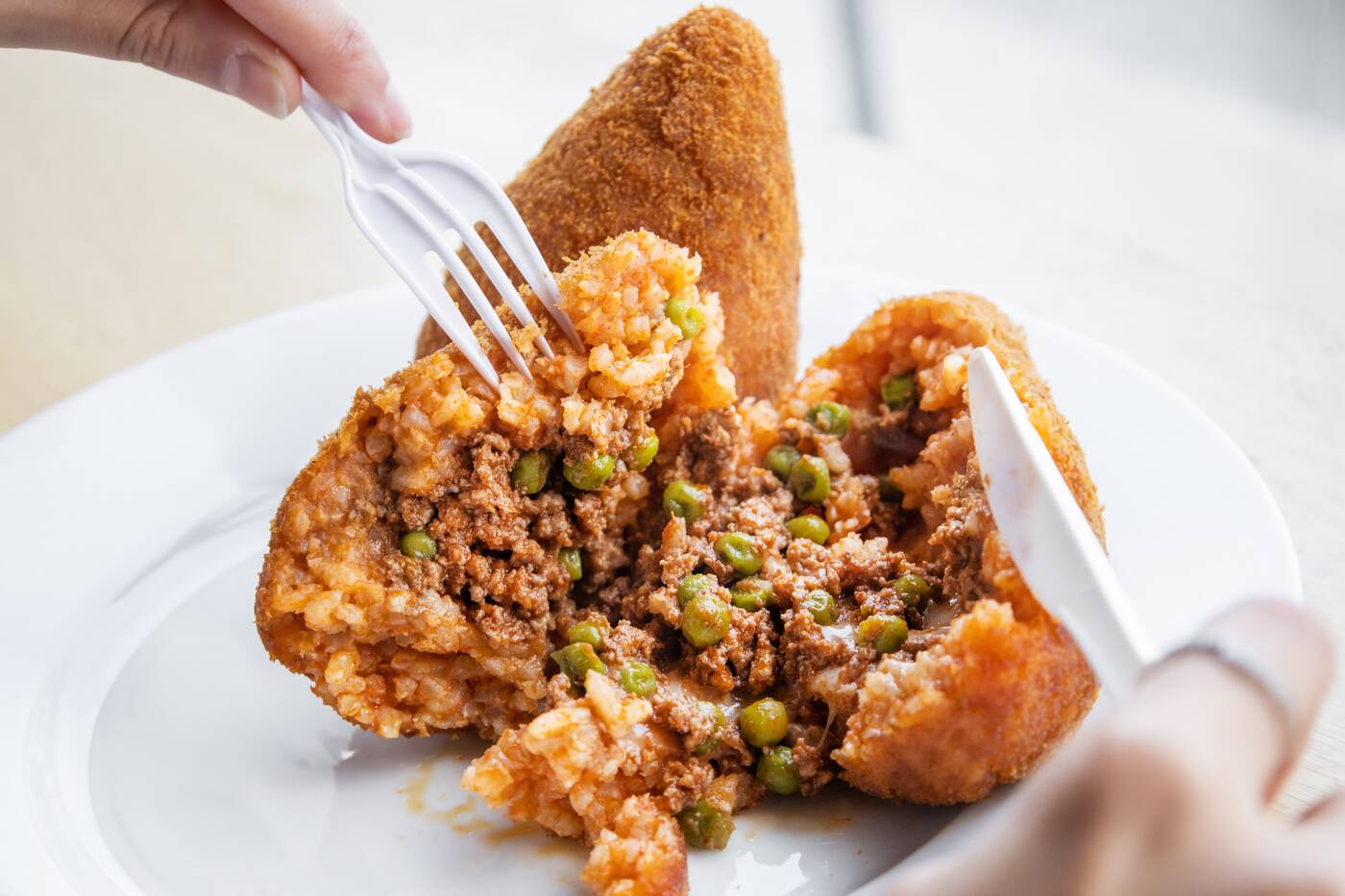 Arancini ($4.50) is a favourite when it comes to Sicilian food and here they're gloriously shaped into mini pyramids and fried until slightly crispy. Get a side of tomato sauce for an extra fifty cents to dip them in. 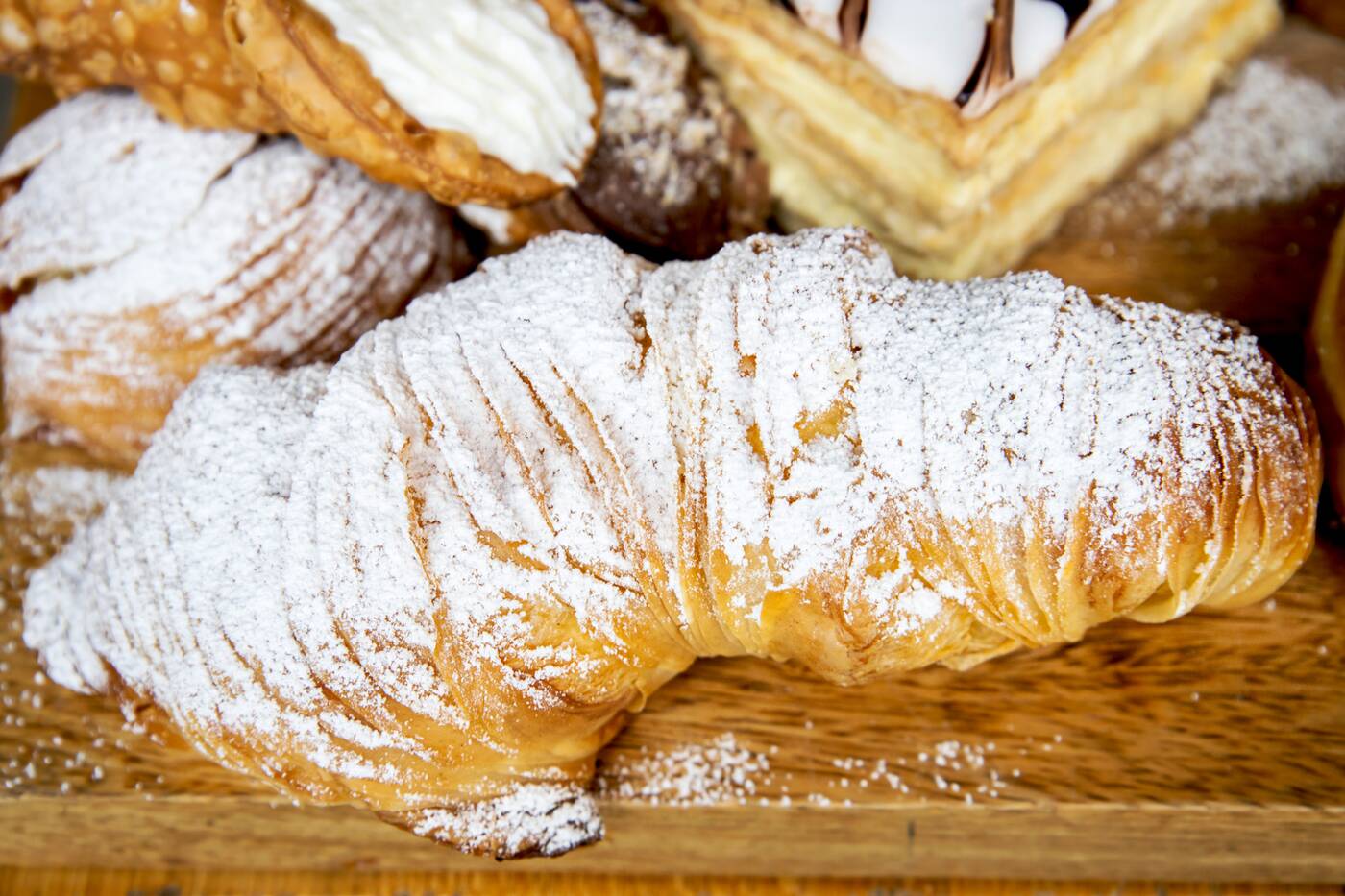 When it comes to eats of the sweeter variety, my pick would be the lobster tail ($3.99). Far superior to the kitschy dessert slices is this longer version of the sfogliatella with paper-thin pastry and custard cream filling. 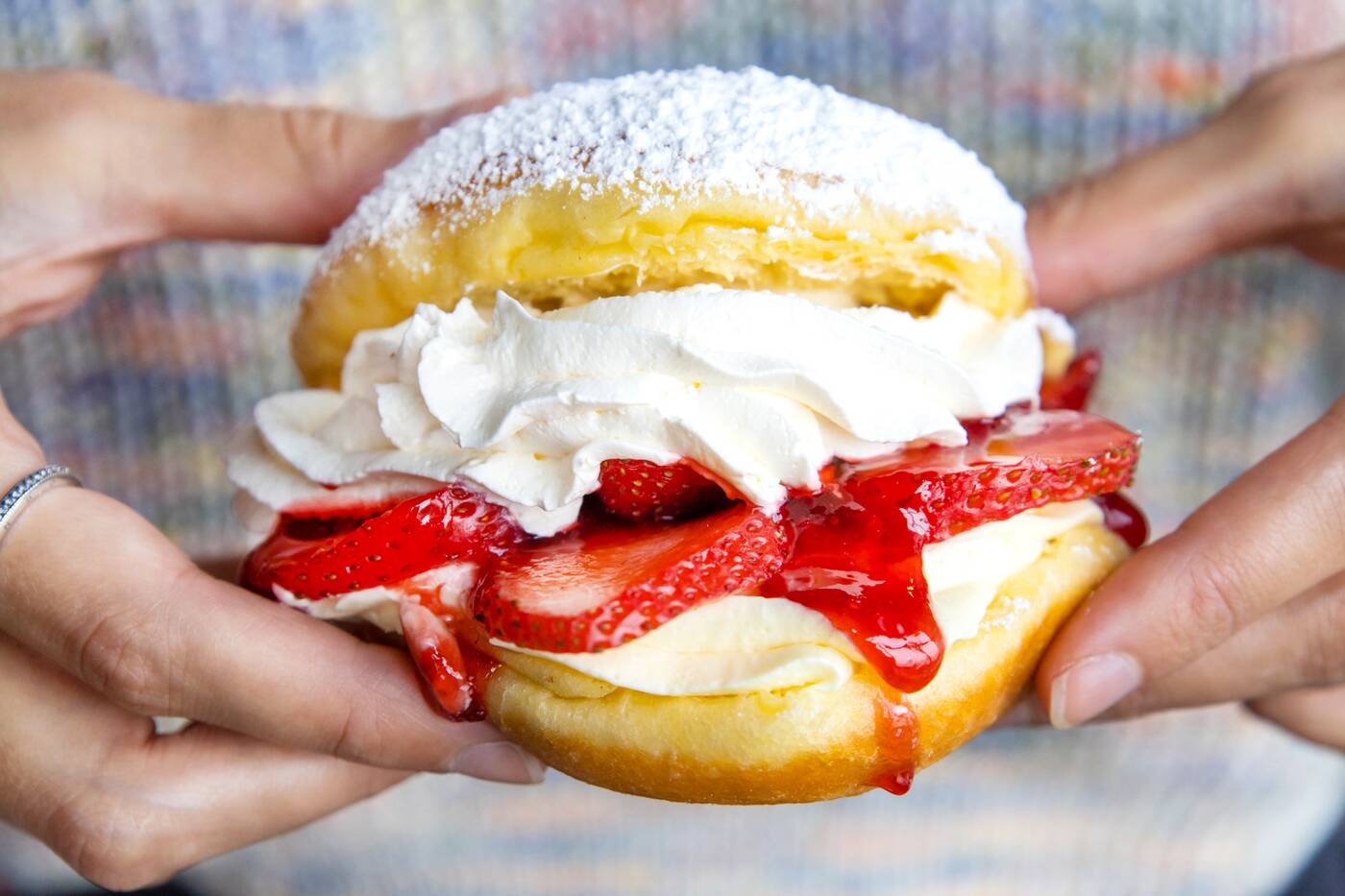 Another favourite is the strawberry shortcake donut ($3.49) that tastes about as good as it looks. Vanilla, sugar-powdered donuts act as a decadent sandwich around the custard, cream and strawberry insides. 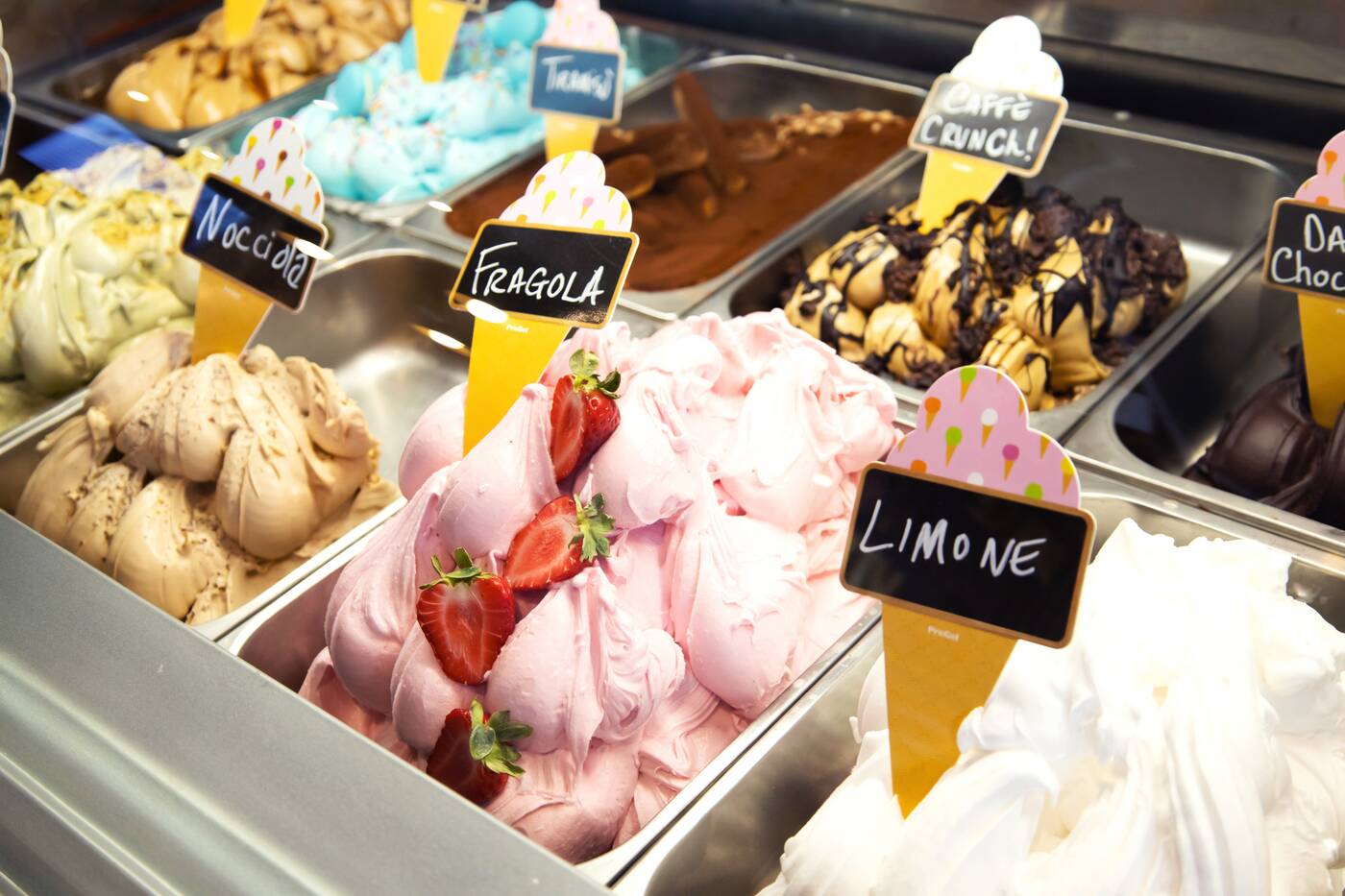 There are also a dozen or so gelato flavours, which tend to rotate often. Expect some of the trusty chocolate, strawberry and pistachio options right alongside others like cafe crunch and birthday cake. 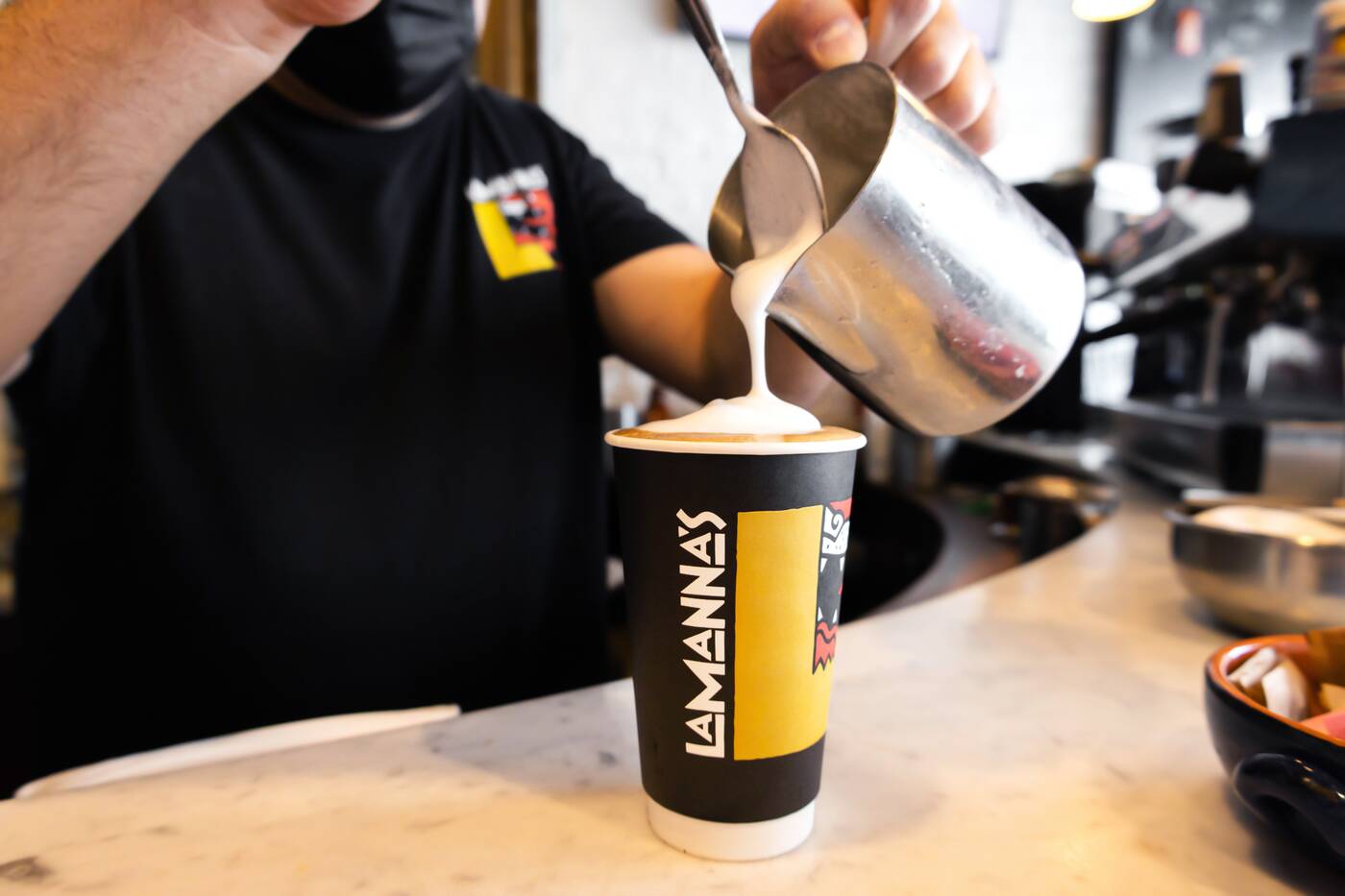 Finish your visit off with a strong shot of espresso over at the coffee station. They make their own custom roasted beans and use the La Marzocco espresso machine for a stellar latte. 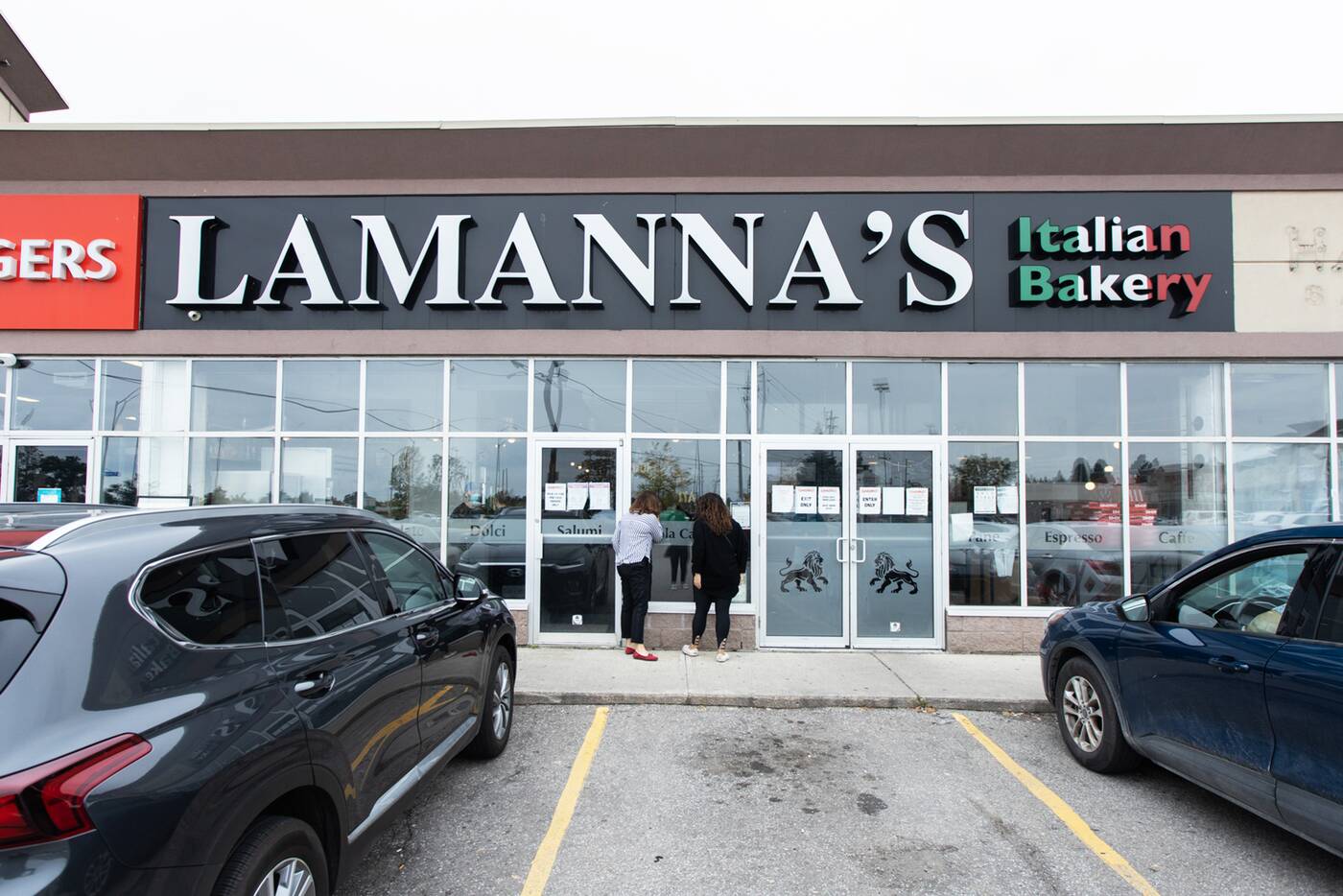 The Best Lasagna in Toronto

The Best Pizza in Scarborough