Insta-famous Toronto amateur photographer Kurt Wang's absolutely stunning sunrise, sunset and moon shots have been getting noticed, and people are starting to recognize him when he's out shooting photos around town.

Clearly a natural talent, Wang has been teaching himself how to take beautiful landscape photos using Toronto as his natural backdrop.

Wang's images are clearly memorable, and showcase his passion for our city — just look at this incredible shot of an eclipse behind the CN Tower he posted back in July.

Growing up, Wang was fascinated with his father's black and white film camera which inspired him to take an intro to film photography course in university. Back then there were no digital cameras of course, and Wang developed his first photos in a darkroom manually.

"It was a good chance to get in touch with photography and art and get the basic knowledge of how cameras work," Wang said.

After graduating, Wang dropped the hobby for many years to focus on building a career and a family, and it wasn't until he bought his first Nikon camera five years ago and started learning DSL that he realized how much he missed it.

"DSL is very different than film because back then you had to be very accurate to get results. Once I picked up that Nikon I couldn't stop," Wang said.

The outdoors are where Wang says he feels most free, and getting out into nature is something he's compelled to do daily. His fascination with space, the sun, moon and sky are evident in every shot.

"Last year there was a comet that stayed for months and I went out shooting every day to get as much as I could," Wang said. 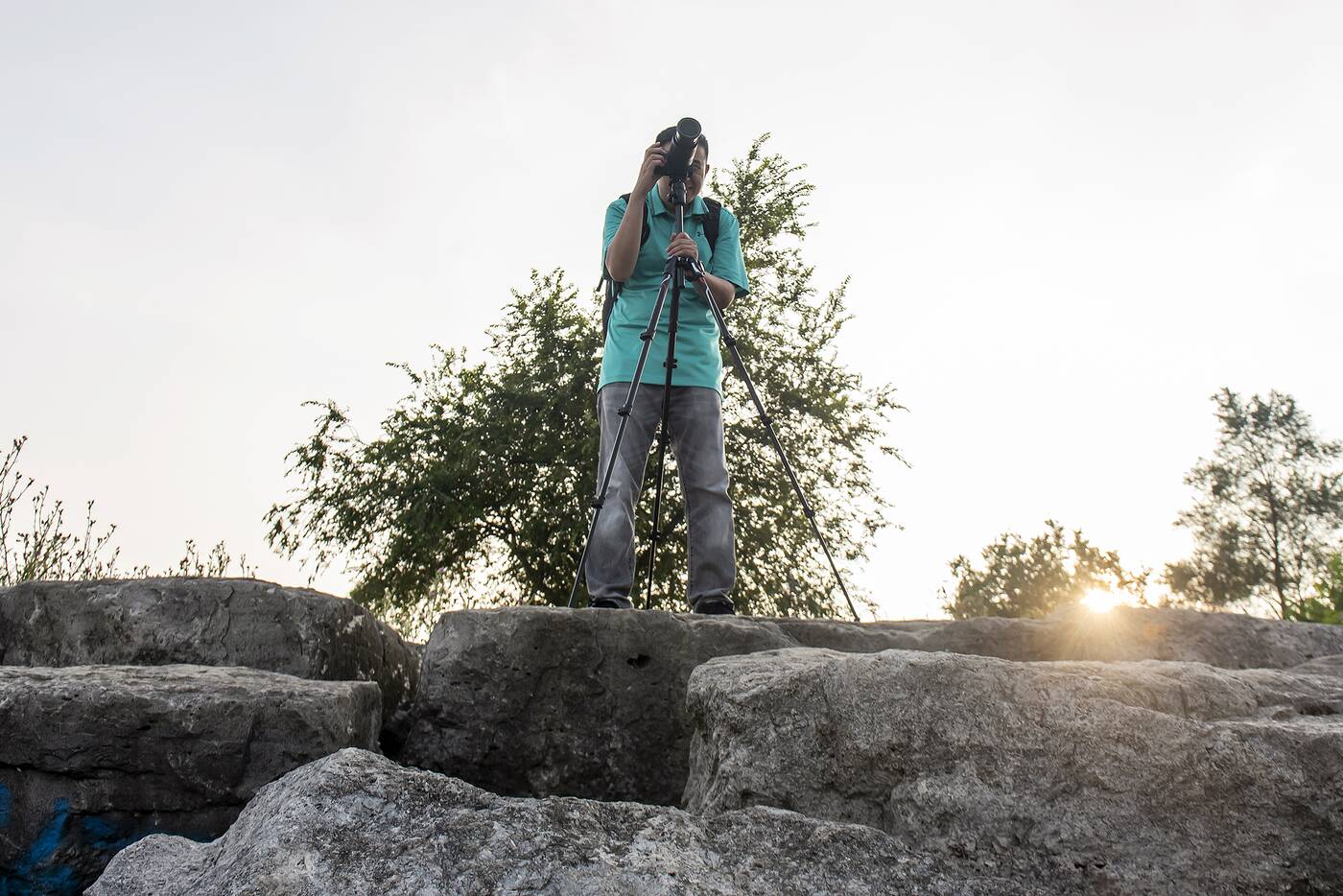 Kurt Wang setting up for the perfect shot.

What started as a hobby outside his regular 9 to 5 quickly became a side hustle, and Wang said he's most drawn to visiting the Toronto lakeshore, capturing the best shots at a few iconic locals.

"My favourite spots are Humber Bay and Polson Pier. I love to capture clouds, the city of Toronto and the water. The lake sometimes has lots of waves and the feeling of power from the water is incredible."

Wang considers Trillium Park and Ontario Place the best places for amazing sunset captures because they provide a perfect wide-angle view of the Toronto skyline.

In terms of the gear he uses, Wang started out with a Nikon and quickly switched to a mirrorless Sony camera, which is much lighter than a DSL. These days he uses the Sony Alpha ARRII, which is, in his opinion, the best overall camera out there.

Last month, Toronto saw hazy skies and an unreal bright red sun, products of smoke drifting in from nearby wildfires that are decimating tens of thousands of hectares of forest in Northwestern Ontario.

"I caught the red sunrise with the cold blue sky. You have an amazing colour contrast in terms of the cold city skyline with the very red sun, but this year the air quality is bad, so I'm happy to get photography opportunities, but I feel sad because of the bonfires' impact," Wang said.

These days, Wang is starting to attract groups of people who recognize him when he's out shooting at his favourite spots in Toronto. "It's a compliment," he said. “Sometimes fans of my work are really excited and I have to stop shooting to talk to people.

"Recently a guy came up and approached me, and wanted to know my name and my handle. When I said 'Kurt Wang', he got very excited and stopped shooting and asked me to look at his pictures as he had admired my work for some time."

According to Wang though, taking that perfect shot of a sunrise or sunset has to be calculated precisely and sometimes when he's out taking photos, groups of people who recognize who he is, stand really close to try to capture the same shot. 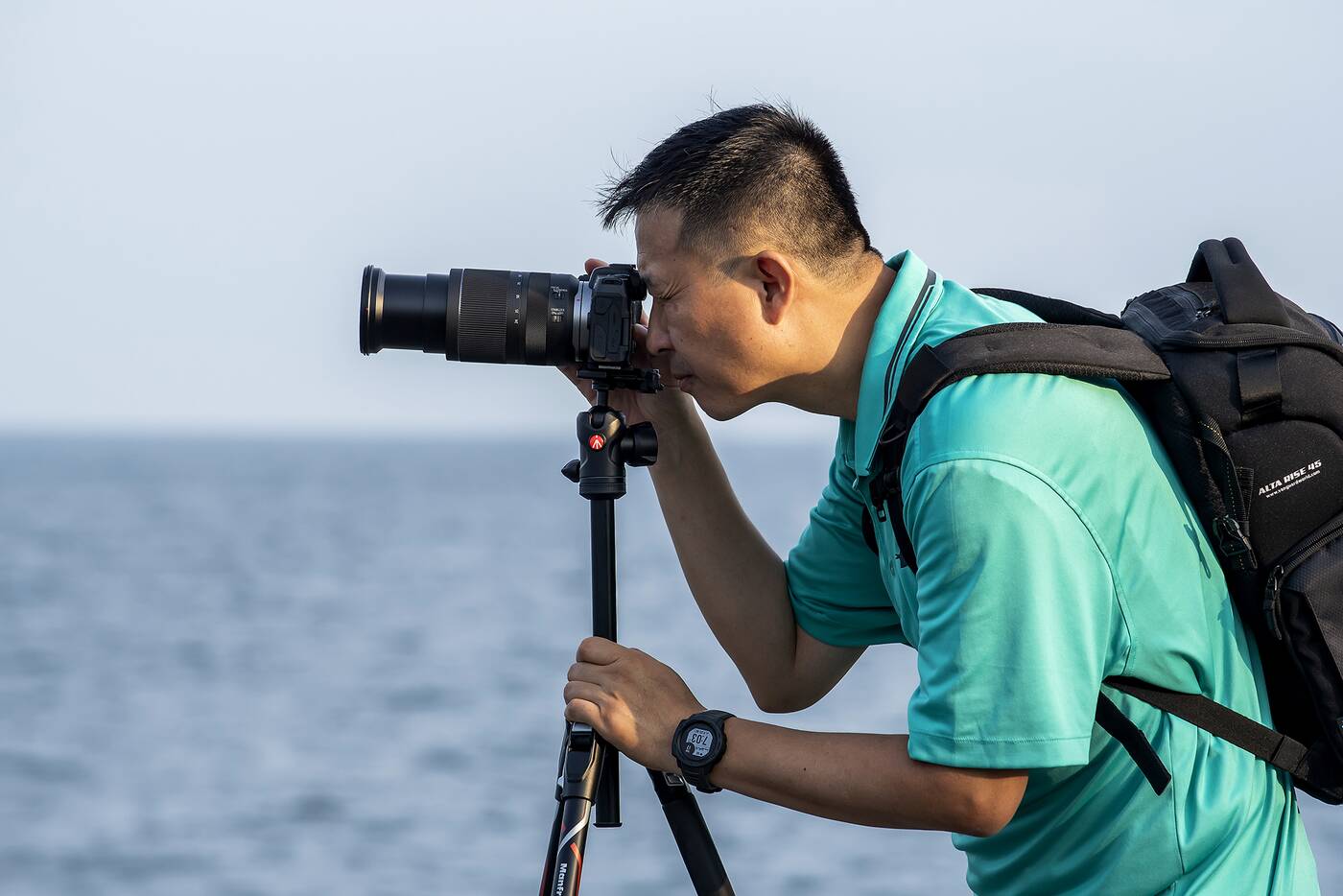 Wang getting a look through the viewfinder.

He laughed and said, "People say 'Kurt Wang is standing here getting a killer shot, and I will get the same thing'. I tell them 'Yeah you've got a good angle, but still there are lots of other things you need to do to produce a killer shot'."

Wang explained that what people don't often realize is how much work goes into the planning behind every photo.

For sunrise and moonrise shots, he meticulously plans on Google Maps and Google Earth to get the precise location and angle to take the best photos. He also uses technical apps and planning tools like Photopills and conducts weather analysis a few days before.

"It may only take me five minutes to post to Instagram, but behind that, there are a least eight or nine hours of hard work involved. It's not as easy as people think. There's lots of scouting, preparation, and planning behind it, but that's the story that people don't see," Wang said.

One of his most iconic shots is the moon phases moving across the sky — which he used interval shooting to capture. For this single still image, he blended over 400 images in Photoshop and stacked them to show the moon's passage and changing of colours.

"I always go out early in the morning or late at night because the colour of the sky and the light is totally different. Twilight, right before the sun is up, the light is really magical. I use a very long exposure to capture so much of this beautiful light," Wang said. 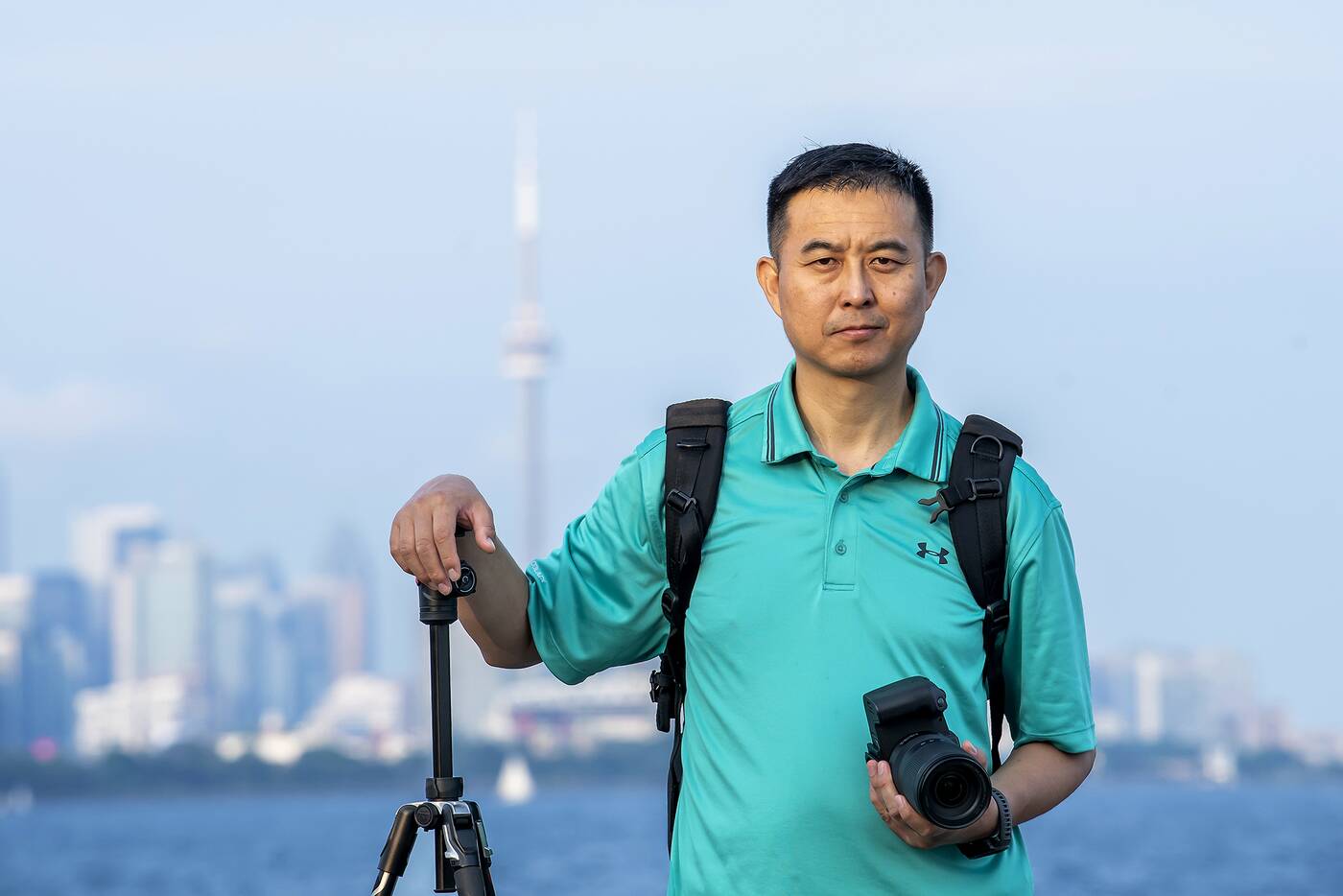 Kurt Wang at one of his favourite spots.

One of Wang's greatest passions is chasing the Milky Way, and he often drives hours away from the light pollution of Toronto until he finds himself in stunning dark sky spots.

He also loves camping in national parks in Ontario with his family, but he mostly makes these trips out alone and stays for a few hours.

"Two months ago I drove out to Port Dover, close to Lake Erie. It was dark, cold, and I heard coyotes and I was a little bit scared. I stayed close to the car, in case I had to jump in. But it's a phenomenal experience after you watch your camera and see the results. Our naked eyes can't see what the camera captures," Wang said.

Although Toronto is Wang's hometown, it's still his favourite city to shoot because he feels there is such an energy in the air and great opportunities for shooting.

"After [lockdown], I haven't seen the energy going down, I see it building up and downtown is even more vibrant now. I can see in the past few years, shooting, Toronto is improving and growing," Wang said.

When describing his experiences out in the city, Wang said that he notices how people communicate through shared experiences, especially when there's an epic sunset — according to him, that's when everyone bonds over how excited they are.

"There are more people, and stories waiting for you to take a picture of. That's why I love it! There are endless opportunities for photography in Toronto," he said.