A local artist has been painting some of Toronto's most popular spots to capture the emptiness of the city during lockdown.

Brandon Steen is no stranger to showcasing the city through art, in fact, some of his work from a previous series has sold out for thousands of dollars. 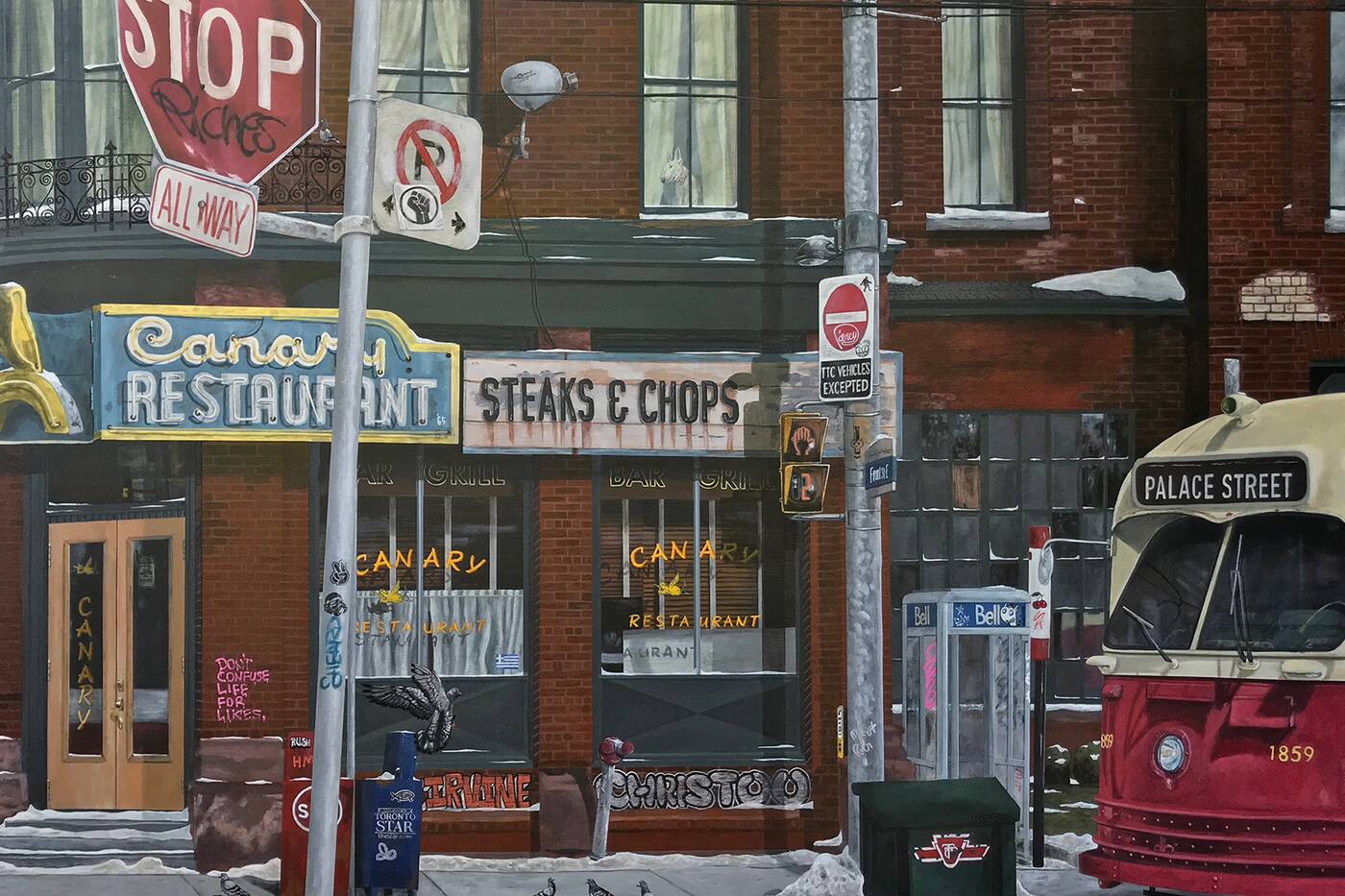 His upcoming solo exhibition "Ghost Town," will include 20 paintings that are 20" by 20" in size to represent the year 2020. These have not been listed for sale yet.

The series will be displayed in September and October at the Elaine Fleck Gallery, where he is a represented artist. His previous art, both sold and for sale, can be seen on the gallery's website.

Each painting features an infamous Toronto location, like Sneaky Dee's, and all include a fox visitor, inspired by the increase of fox sightings at the beginning of the pandemic.

"The fox to me became the protagonist of the pandemic. He makes his way through the city because he's not being threatened by humans because we're all stuck in our homes. So the streets become a ghost town, and hence the name of the series," he said. 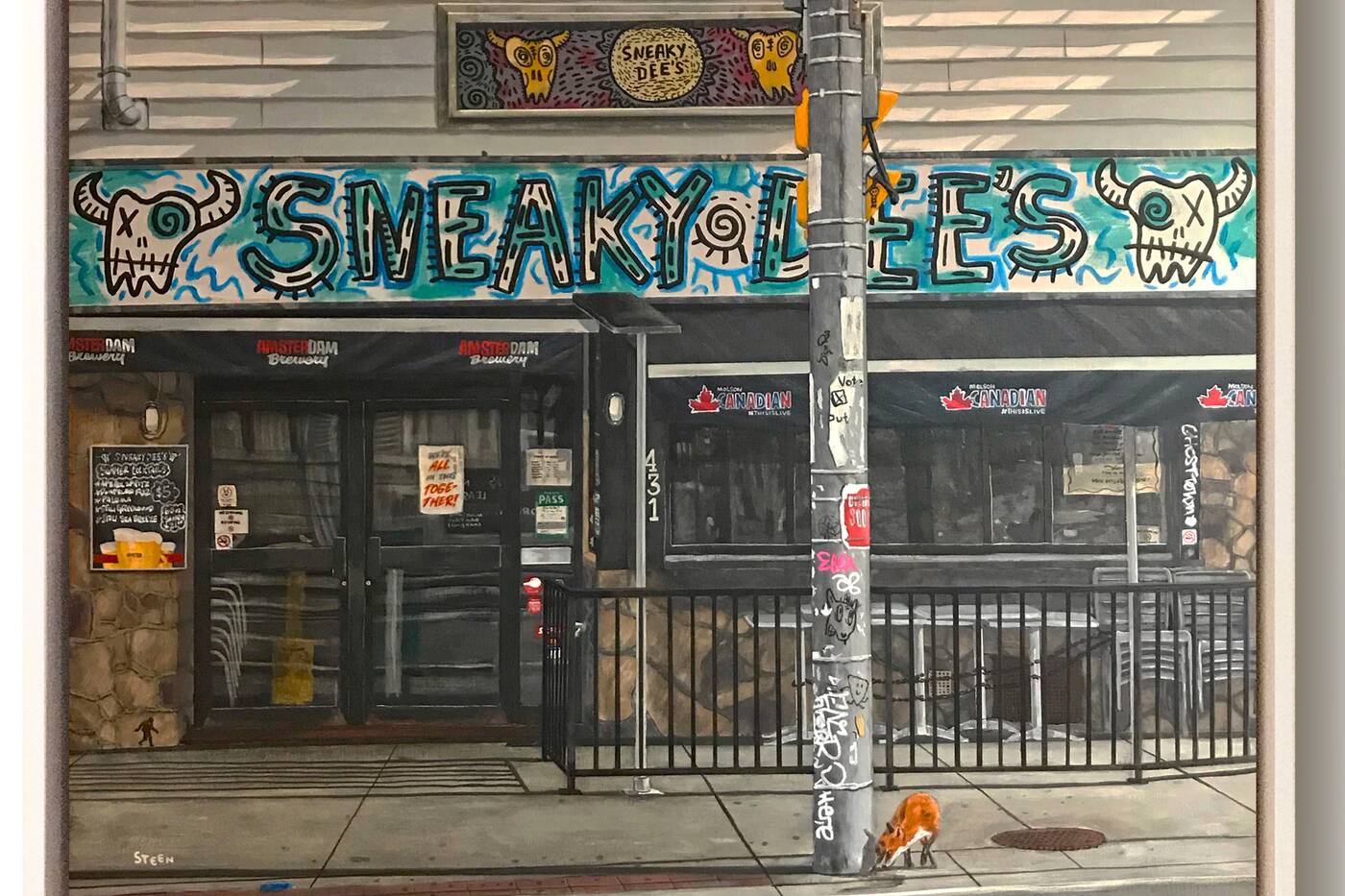 This painting called "Sneaky Dee's" will be a part of the Ghost Town series.

Since last March, people across the city have been impacted by COVID-19. Steen told blogTO that he was in an especially challenging situation because his wife suffers from a health condition leaving her with an extremely impacted immune system.

"COVID is a very scary thing for this family, so I can't risk going out," he said.

Aside from walking his dogs, Steen has stayed inside with his wife since last year. Luckily, with his studio located at the back of his house, he's been able to continue painting.

This did present a problem since he was no longer able to go shoot locations to paint. For this series, he has had to rely on his personal archive, as well as the kindness of his friends who sent over photos. 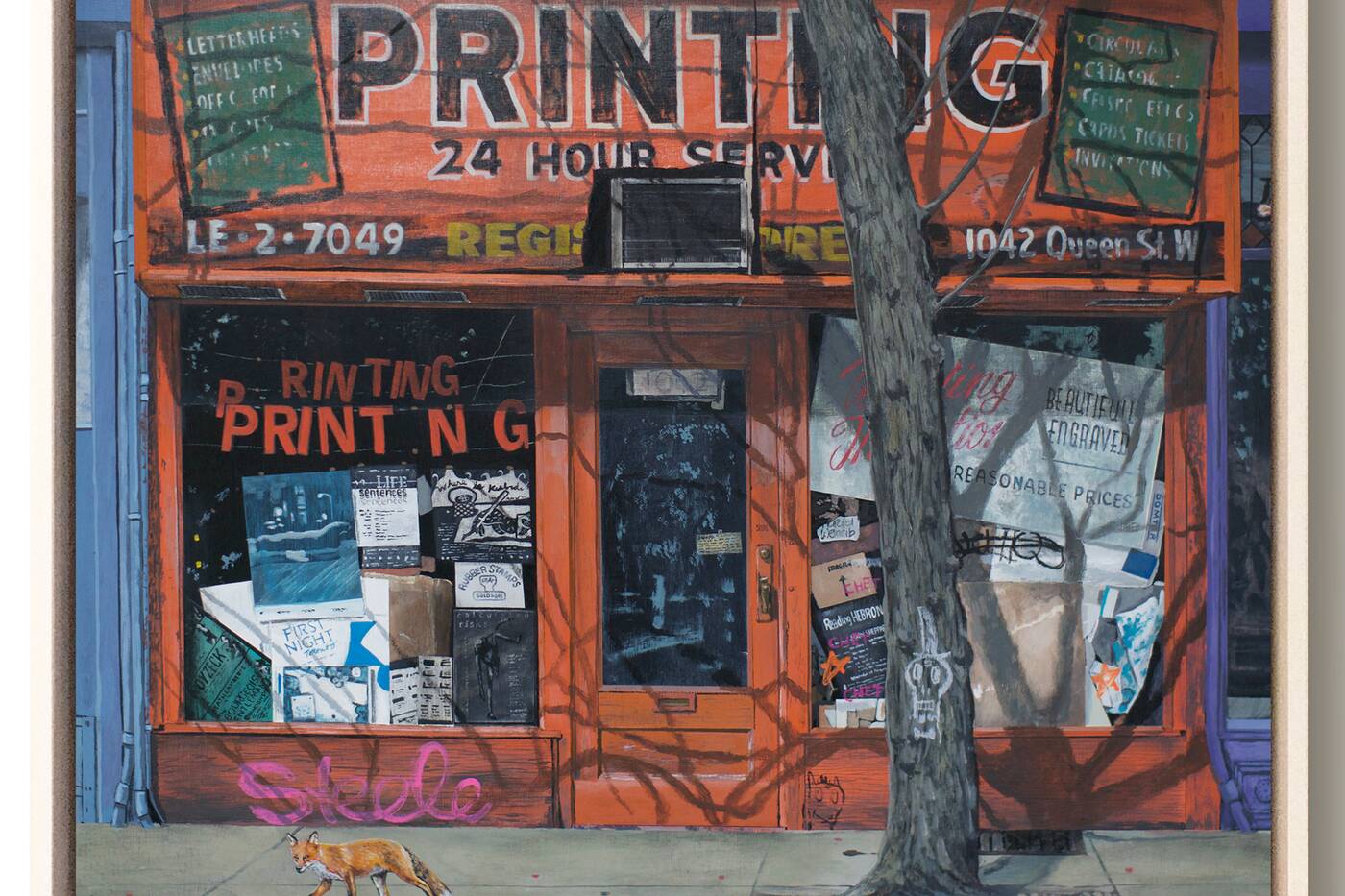 This painting is called "Back At," inspired by a sign hung in the store window when the owners would leave.

By no means is this a fast process, with each painting taking anywhere from a month or two to complete.

"I just sort of muck around in the studio creating the composition. Once I get that settled, for the most part, it stays. Then I draw it onto birch panels to paint and just go to town," he said.

He is currently working on the tenth painting in the "Ghost Town" series.

"Once this one's done that leaves me with 10 more to do. I'm officially halfway through the production of the show, so I'm feeling good about that," he said.

He says out of all of his work, the painting of Vesta Lunch means the most to him.

"I had a very close relationship with my father-in-law, who passed away. We would go into Vesta and have lunch or, or just coffee, and we'd have really good talks there. So that would be the most meaningful spot that I've painted because of the emotional equity in it for me," said Steen. 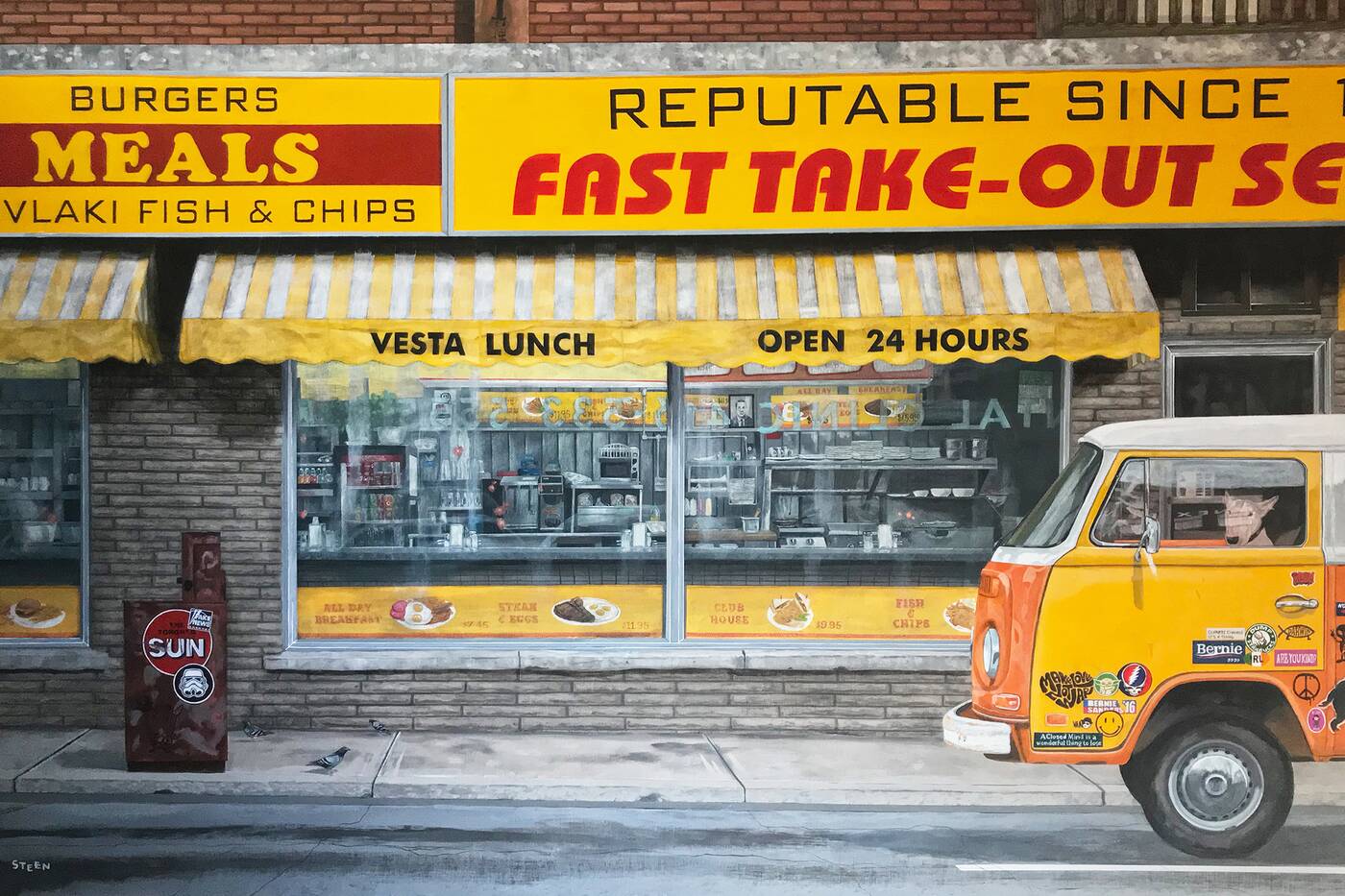 Brandon Steen says "The Vesta" is his most meaningful painting.

To make the painting even more personal, he swapped out a photo of the original owner on the restaurant's wall for a photo of his father-in-law.

"I don't paint people, I just want the focus to be on the architecture. So if there's a person in a painting, it would be as a portrait on the wall or something like that," he said.

The painting is currently listed for eight thousand dollars on the Elaine Fleck Gallery's website. 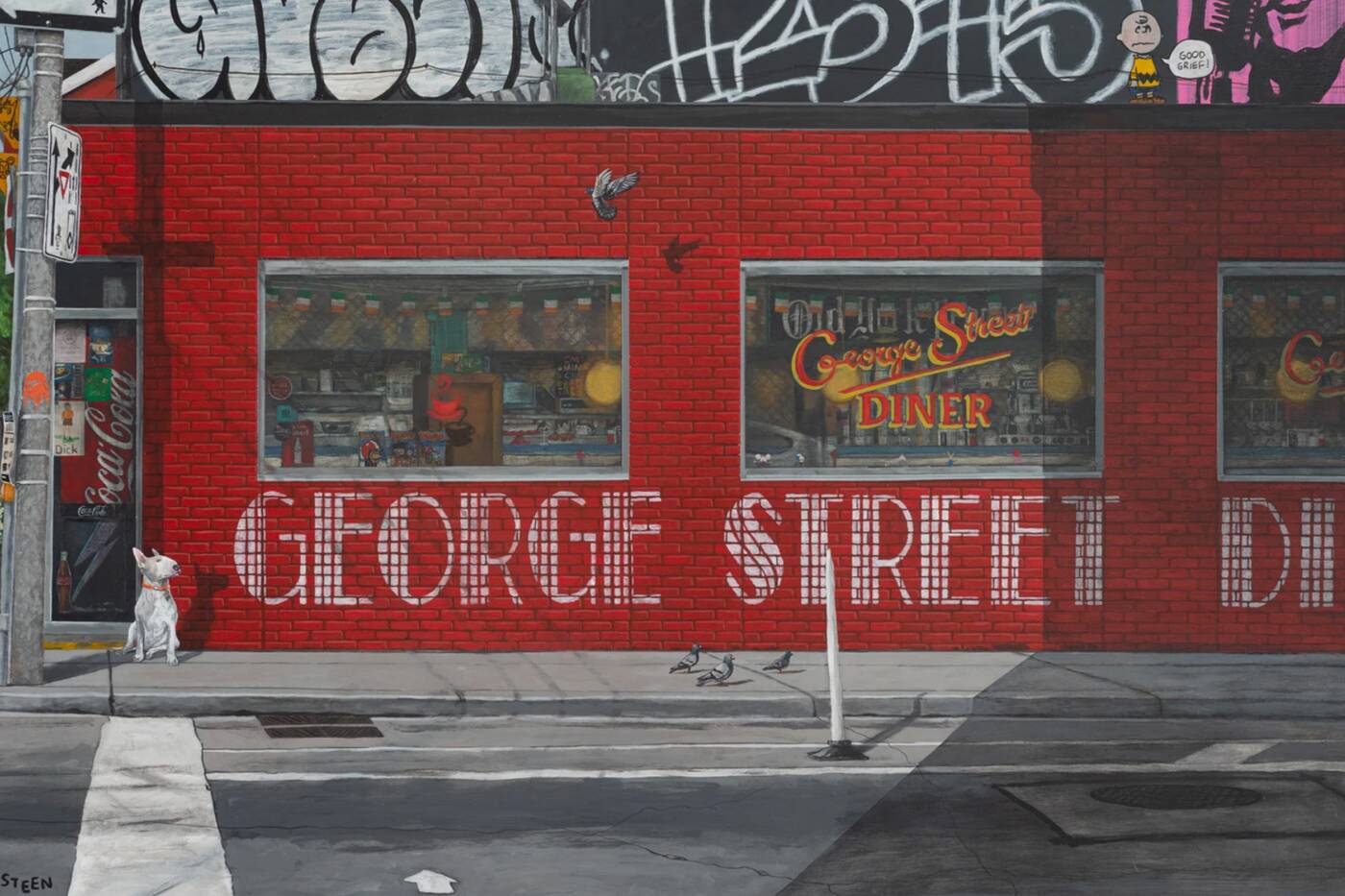 Brandon Steen is known for his Toronto paintings, such as this one, of the George Street Diner.

While not all of the paintings have such sentimental value, they are all extremely well-detailed and a gorgeous ode to the city.

He says that painting throughout the pandemic has made him extra grateful for his friends and the city he calls his muse.

"There's so much to paint here and I want to celebrate that. That's what I do with my art, I'm holding Toronto up to say, hey, we've got great buildings and great locations and a great history," said Steen.