Nuit Blanche has come and gone, marking yet another exciting edition of this citywide arts fest.

The 14th year of this sunset-to-sundown event sprawled from Fort York to Scarborough, with a new addition to the Nuit Neighbourhoods list: Danforth East, meaning more pockets of Toronto involved than ever.

Starting the night on the right foot was a traditional Indigenous jingle dance inside the Eaton Centre Bridge, as part of Bekah Brown's Chasing Red, a beautiful depiction of the Northern Lights.

Nearby outside Old City Hall, Peace to the Past, Reach for the Future  was easily one of the most popular exhibits of the evening. 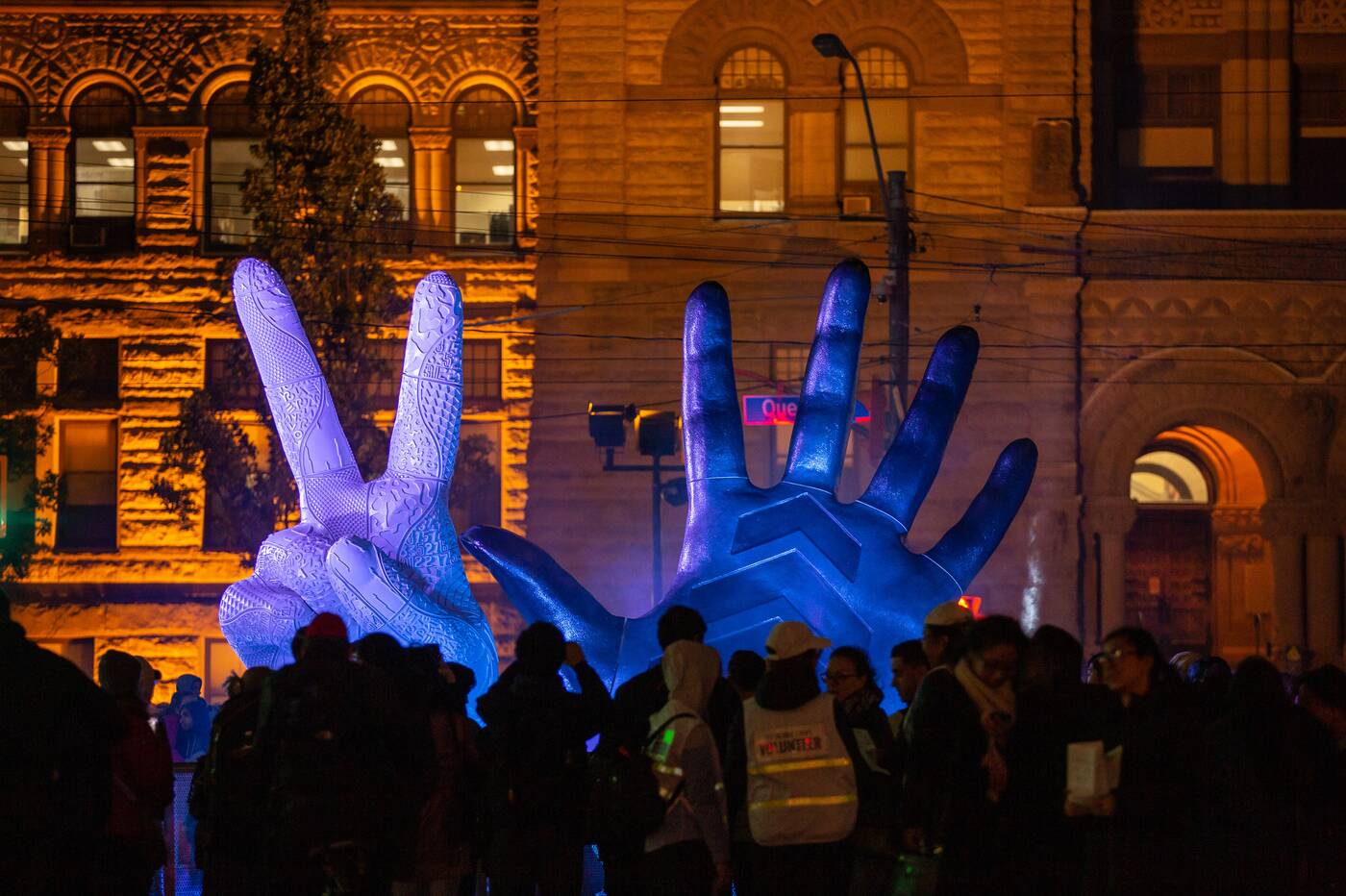 Peace to the Past, Reach for the Future was popular by Old City Hall. Photo by Andrew Williamson.

This 18-foot-tall hands sculpture by Esmaa Mahamoud and Bryan Espiritu threw up deuces and a five in honour of the Raptors' 25th anniversary. Word on the street is it might actually become a permanent installation in Toronto.

You might have spotted the dancing potato-looking thing further down Queen Street, which was apparently doing its special dance all night long.

There’s a huge street party that has taken over the corner of Queen and John in #Toronto #nbTO19 #nuitblanche pic.twitter.com/PmePK9hDH1

Another hub for dancing: Queen and John, where an impromptu dance party took over the intersection. 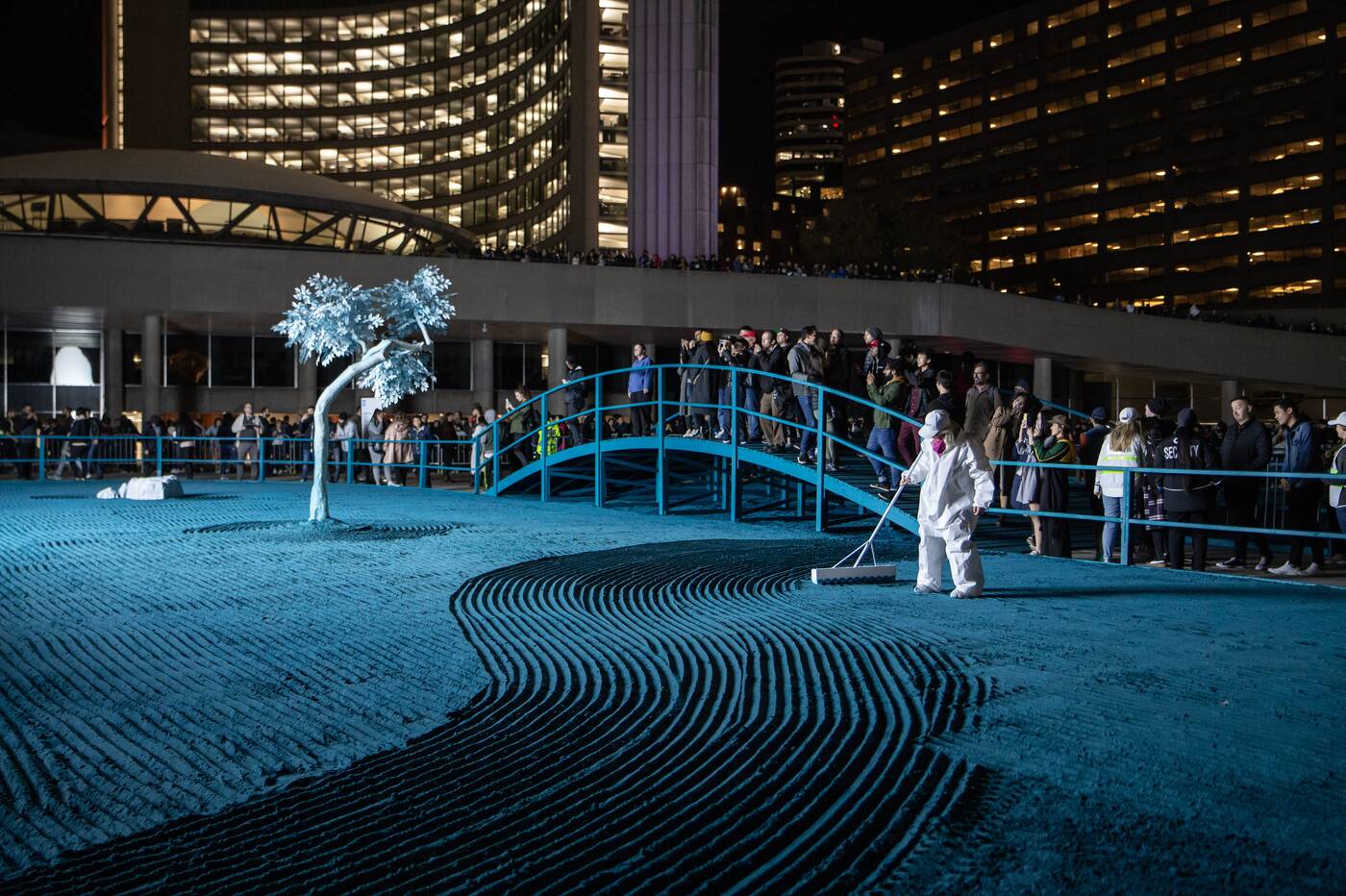 Hundreds lined up for Lunar Garden throughout the night. Photo by Andrew Williamson.

A closer look at a Lunar Garden at #nbTO19 #Toronto 🌕👀 pic.twitter.com/IJ1k0Wf3Uh

Hundreds of people waited in line to snake around the Zen-style garden, which included a 30-foot moon orb, blue sand, a photo-op bridge, and white-attired staff who periodically raked the sand. 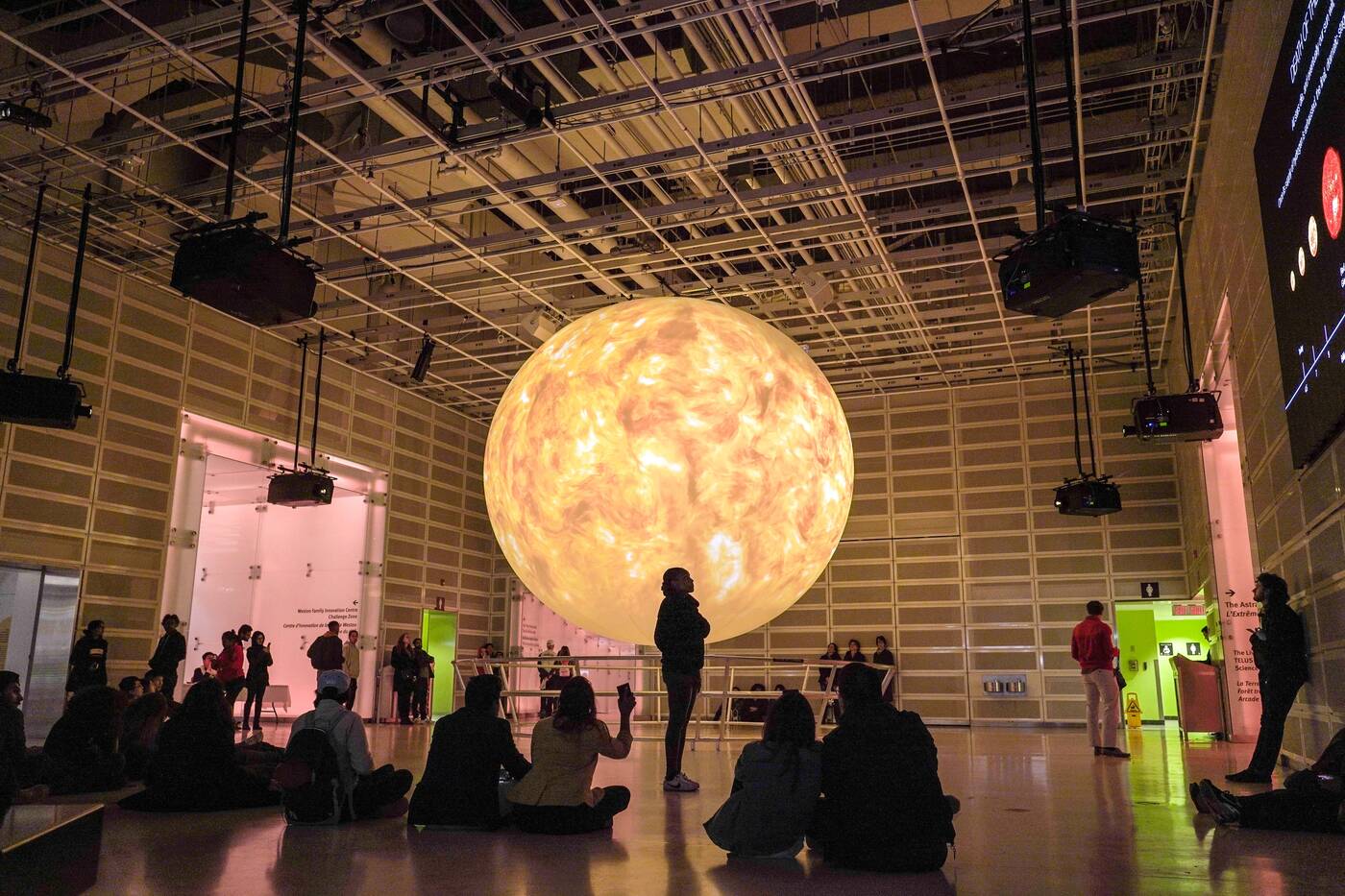 Orbs were definitely a theme across the city: Director X brought his sequel to his hit 2016 installation Death of the Sun with yet another massive glowing sphere, this time with Life of the Earth at the Ontario Science Centre.

Nucleus is mesmerizing crowds under the Gardiner #nbTO19 #Toronto 😮🎨 pic.twitter.com/vZmxRKzSnB

Down by Dan Leckie Way, Nucleus brought another illuminated sphere, suspended under the Gardiner.

Someone has wrapped an area under the Gardiner Expressway with a lot of yellow and black caution tape #nbTO19 #NuitBlanche #Toronto #TheBentway pic.twitter.com/ApDL1YdOZD

Not far, Hoarding's hazard tape wrapped around the pillars of the Bentway for a simple yet highly immersive experience. 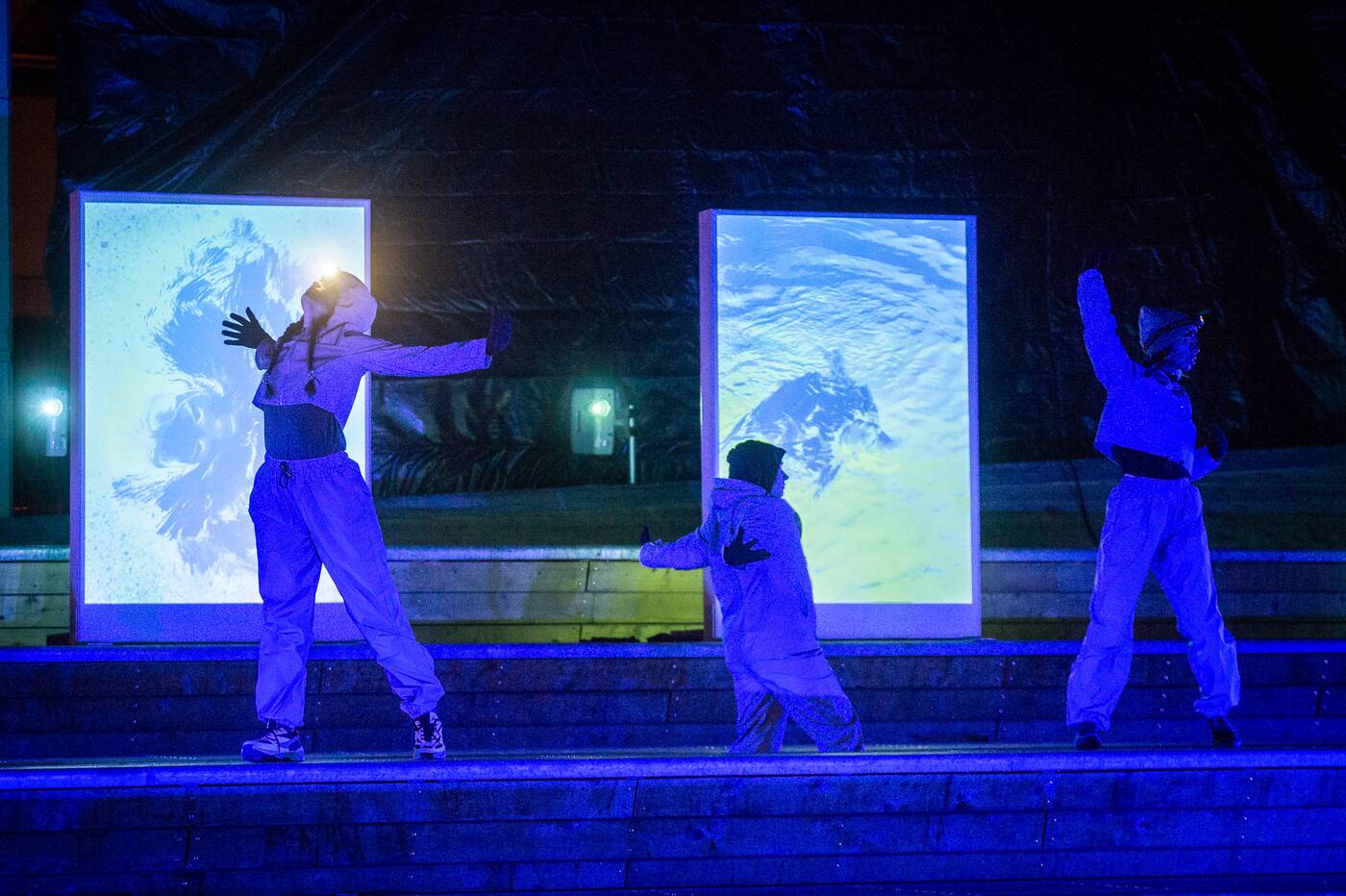 Dancers worked with sound and video under the Bentway. Photo by Matt Forsythe.

Fort York actually might have had some of the most interesting exhibits of the entire event, including some great politically charged work, which was pretty refreshing.

Animal rights activists are remembering pigs that were killed outside the abandoned slaughterhouse that’s part of #nbTO19 #Toronto pic.twitter.com/su0HpOxauP

As planned, members from the organization Toronto Pig Save crashed the Anatomy of Abattoir show at the abandoned Quality Meats Abattoir on Tecumseth. 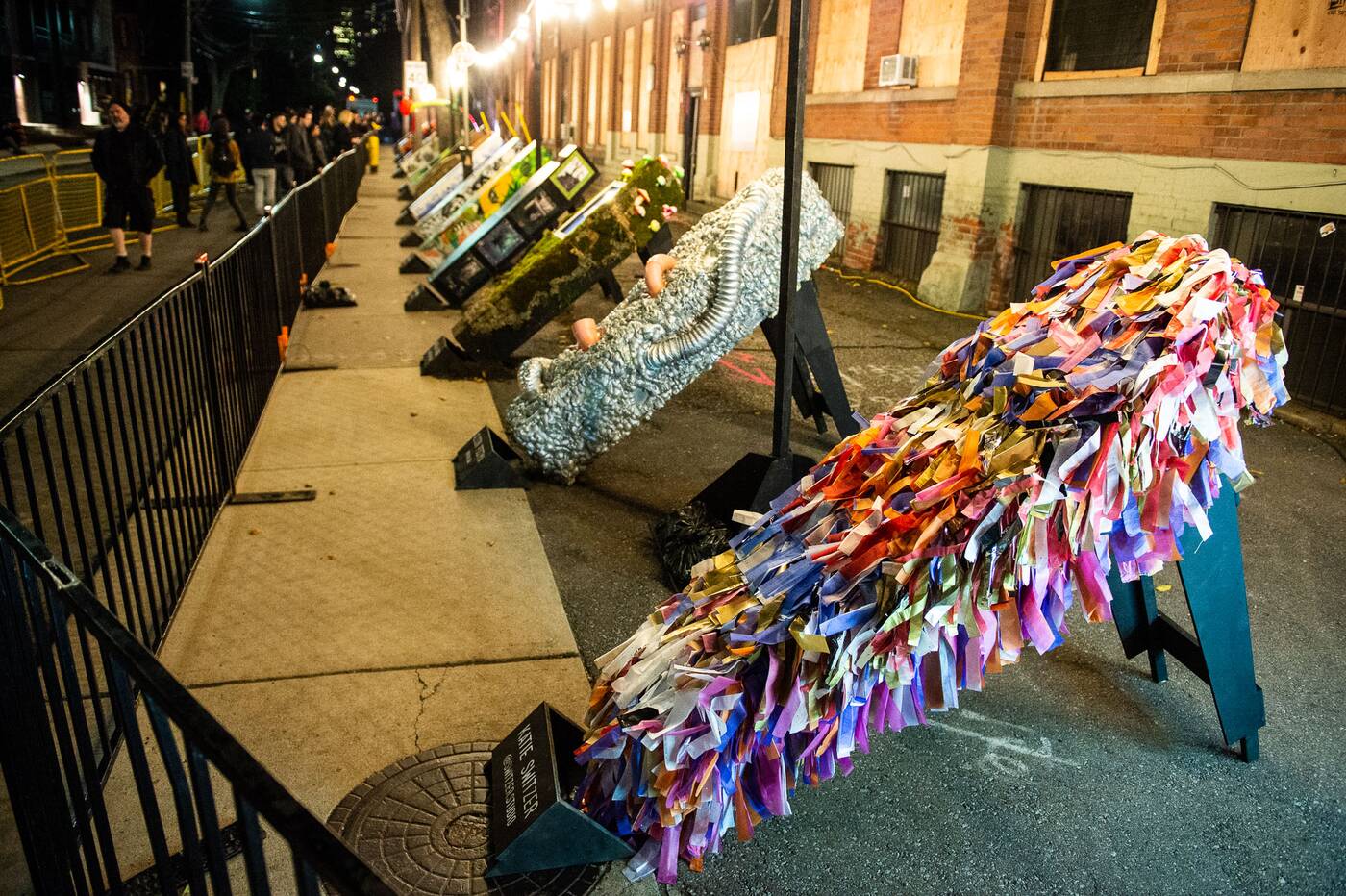 Eulogy for the Coffin Factory made a statement on eviction and tenants rights. Photo by Matt Forsythe.

And just down the street, 24 artists and tenants who were evicted from the historic Coffin Factory lined the street with caskets that touched on the ideas of home (and lack thereof) in a thoughtful and appropriately morbid dislay of anti-displacement.

They’re firing fake babies out of a canon at Fort York for #NuitBlanche #nbTO19 #Toronto 👶 🎨 pic.twitter.com/hwf7NRsXHi

Meanwhile babies (fake ones) were being shot out of a cannon courtesy of a super playful performance called Everyone Wants a Free Baby, organized by Studio F Minus. People were loving these faux newborns parachuting down into the crowd. 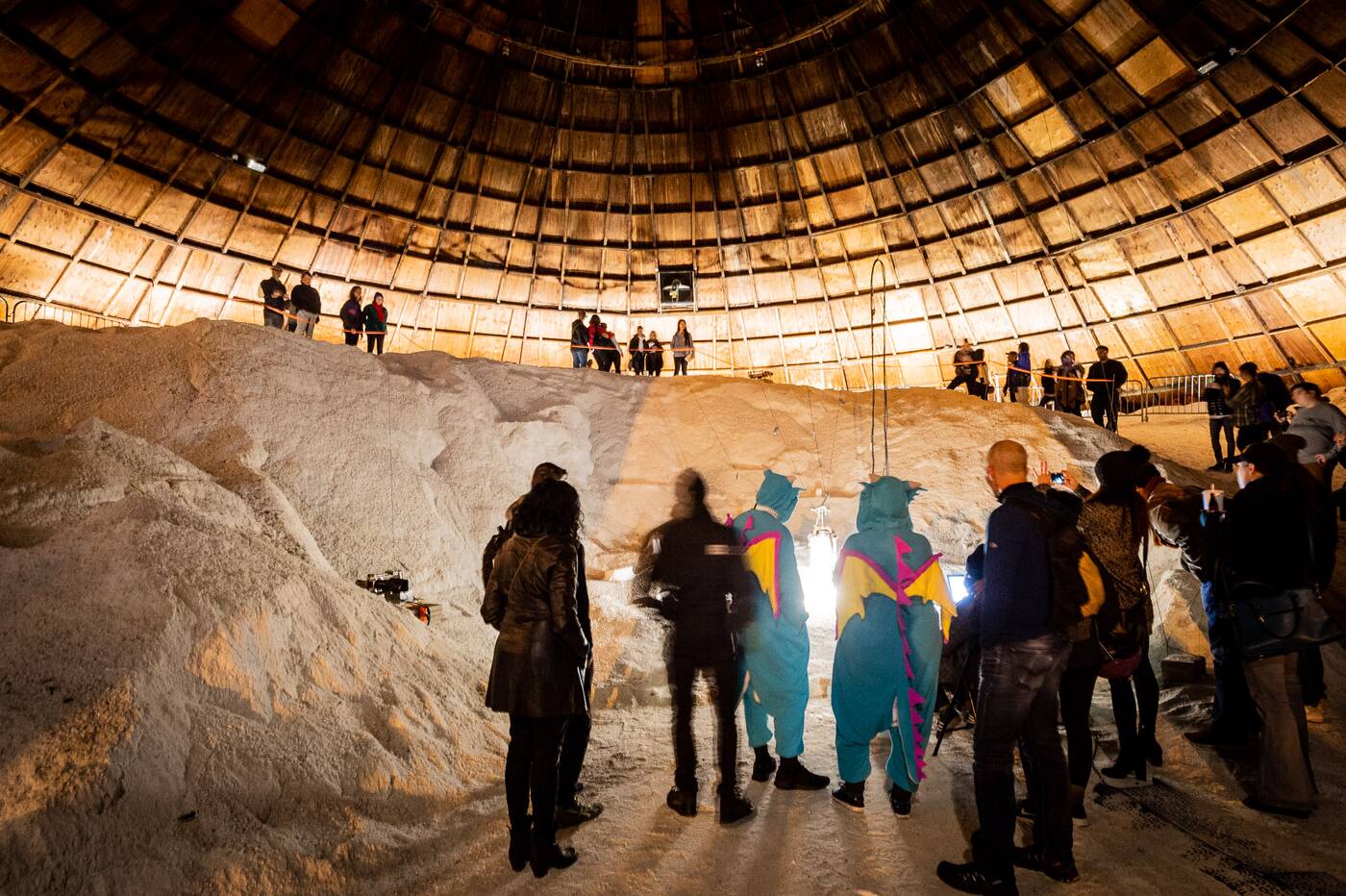 If you didn't get a chance to visit Detritus on Wellington Street, you missed out on a glimpse inside this towering salt dome.

Speaking of frequencies, there were some sweet beats that only headphone-wearers could hear at the silent disco, an event not officially part of Nuit Blanche which utilized Graffiti Alley perfectly. 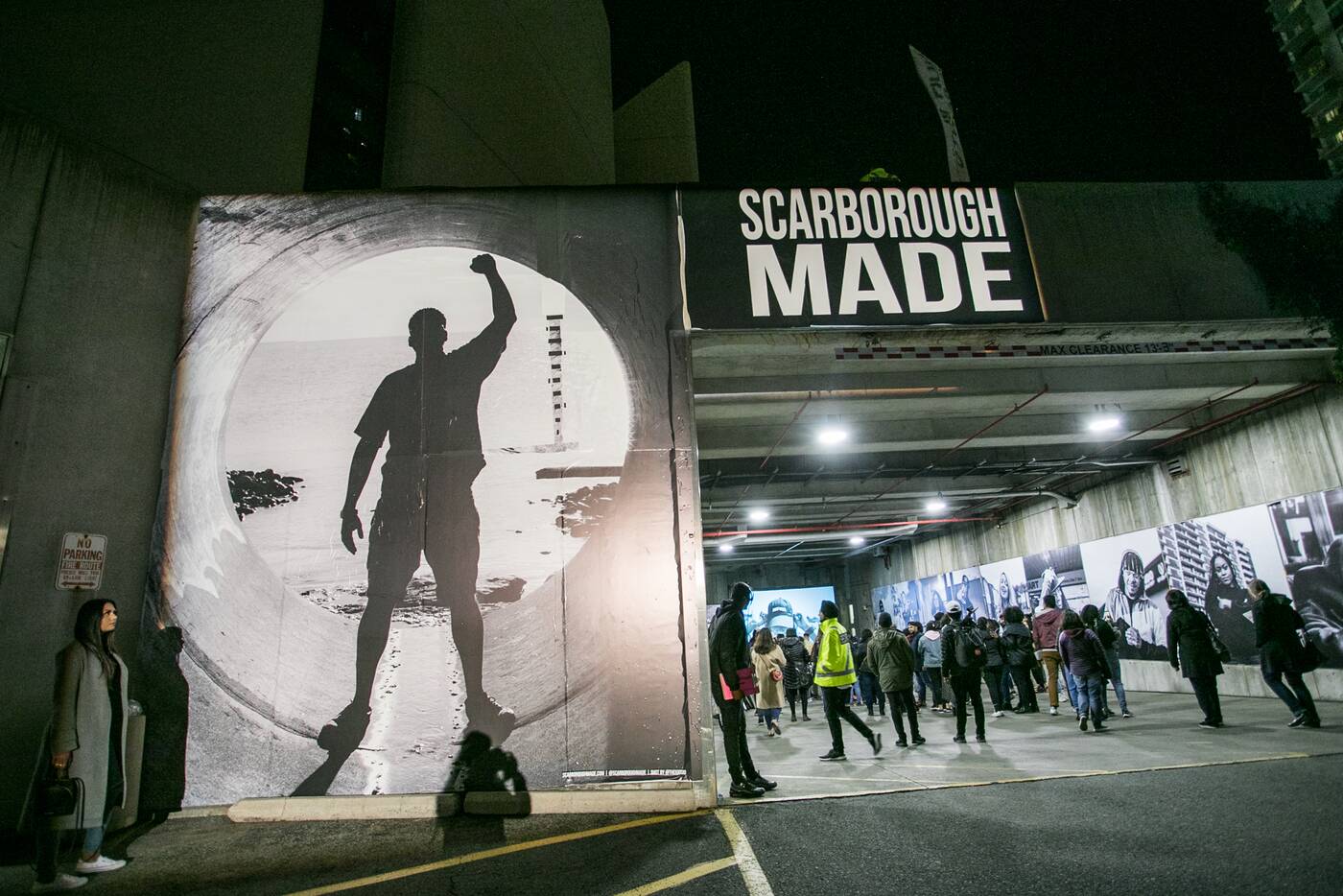 Someone is dressed up as the “King of Nuit Blanche” and taking photos at Bay and Queen 👑 #nbTO19 #Toronto pic.twitter.com/sF3sygwZBg

(Speaking of kings, did you catch a selfie with the self-proclaimed King of Nuit Blanche outside Old City Hall?) 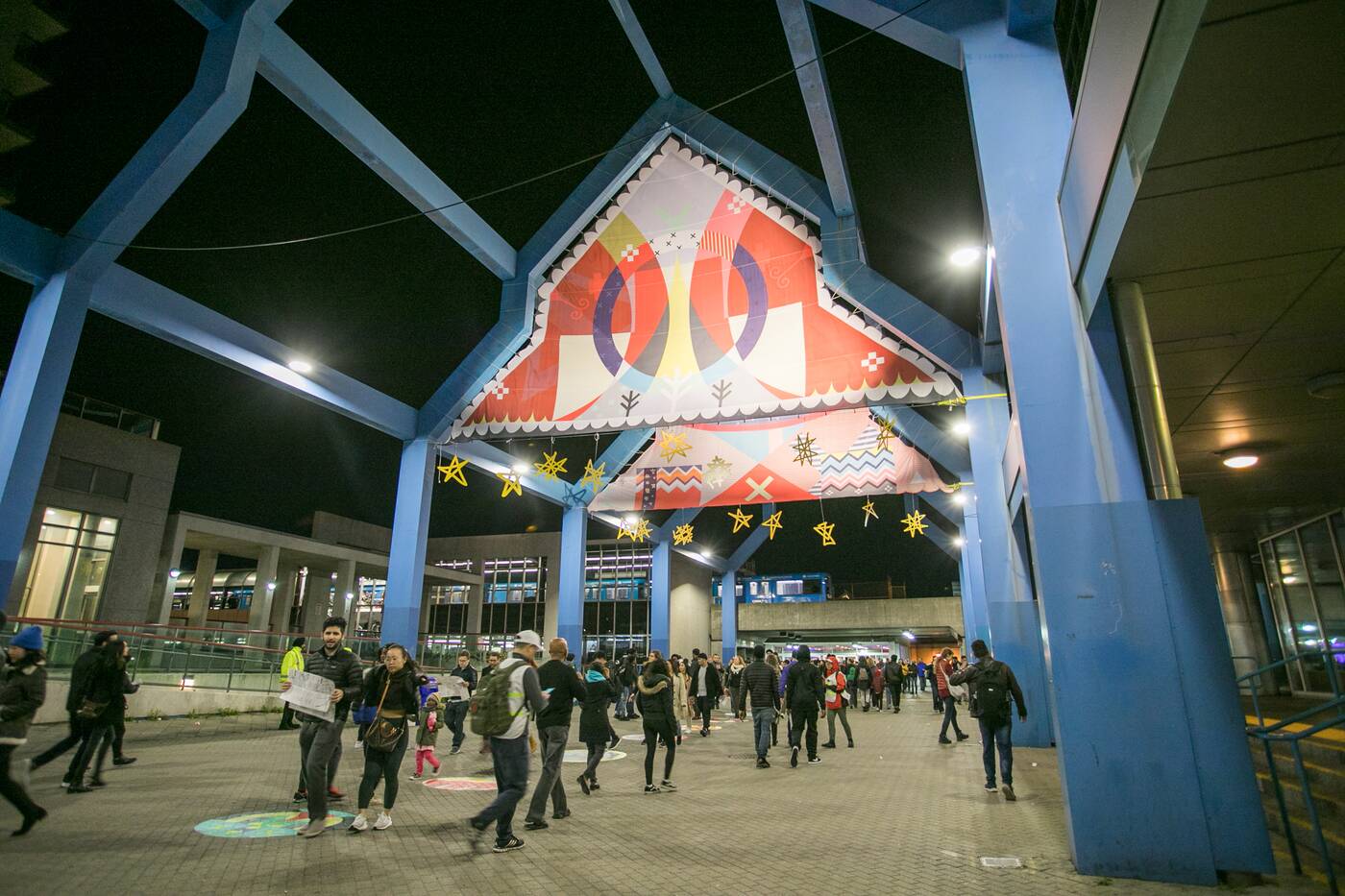 Ephemeral Artifacts was a ritualistic performance which took over STC with hanging bells and live acts of stringing fresh jasmine garlands.

Tile-Scape along the Danforth is an interactive installation that uses Scrabble boards and pieces #nbto19 #Toronto 😮 pic.twitter.com/zKdb1eCR6H

Danforth East's inaugural offerings were small in number, but Tile-Scape was definitely a fun and highly interactive installation that used Scrabble pieces. 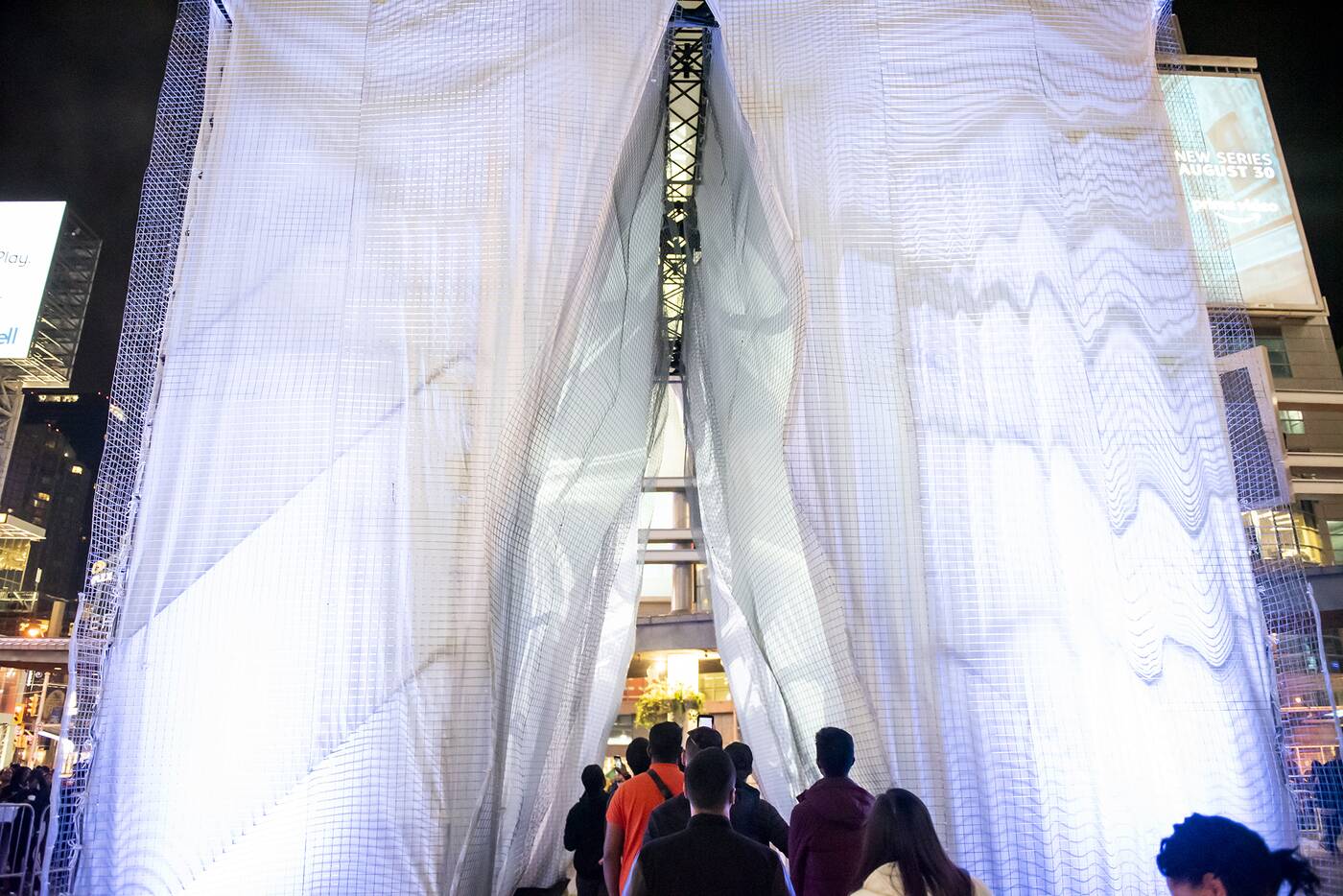 Yonge-Dundas Square got a 25-foot-tall glacier. Photo by Hector Vasquez.

Other installations were less interactive but grander in scale, like Yonge-Dundas Square's On Thin Ice, which was a basic walk through beneath this 25-foot-tall glacier.

And the historic Campbell House, also not officially part of Nuit Blanche, got a futuristic makeover with Tron-like lighting, which effectively transformed this old space into something out of a movie.