Once upon a relatively recent time, bars and restaurants clamoured to hang rows of twinkling string lights over their patios. The effect was magical and romantic and so effing twee, like the old-timey Edison bulbs they later started hanging in clusters from their ceilings.

Now, neon is that "new new" — if you haven't noticed all the sassy bathroom signs or been on Instagram in the past year.

Exposed filaments are falling by the wayside when it comes to hip-as-hell lighting trends, making way for eye-catching beacons at cool downtown hangout spots.

It's a type of lighting that feels ultra modern and retro at the same time — futuristic, yet somehow completely nostalgic. There's nothing else like neon in the world, which is sad given how rare the craft of making and repairing the stuff has become. 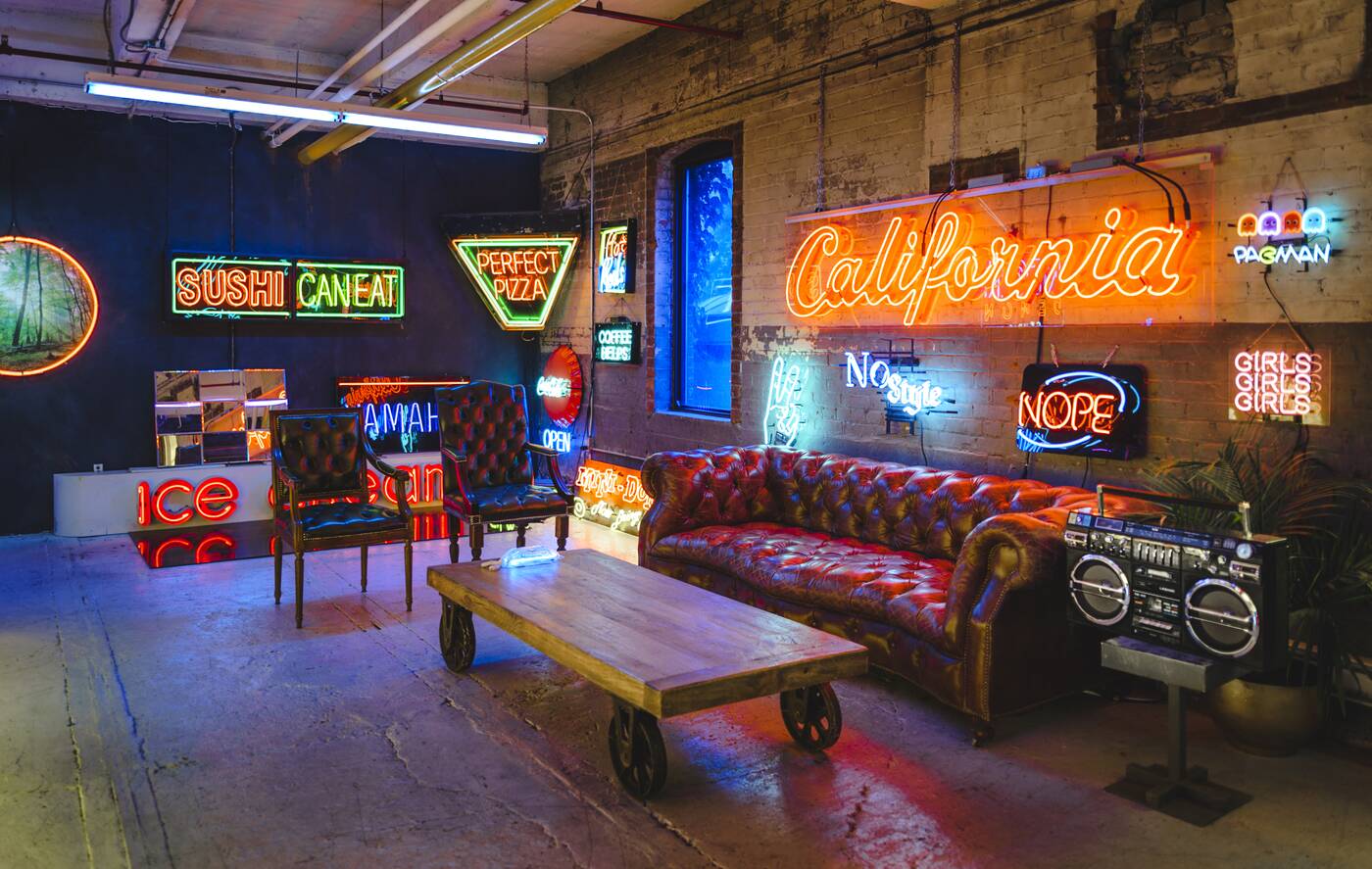 "The problem with neon benders is they're basically artisans — part artists, part engineers, part glass blower," he continued. "I pretty much know all of them in Toronto. There are only about five or six that still work in neon."

Fortunately, he's been able to work with some of these local artists to source and restore incredible signs from eras gone by — many of which now live in an east Toronto studio space called Neon Demon.

Fuelled by passion, curiosity and his own fast-growing personal collection of neon signs, Simo transformed part of an old cardboard factory at Dundas and Carlaw into a stunning wonderland of neon lights a few months back.

He opened Neon Demon as a photo studio and gallery in May, but his impressive collection of works keeps growing, making it seem almost like a museum of cool stuff from the past.

"I got my very first sign about two years ago," said Simo in an interview at his studio last week. "It's from an old camera store and made in the 1950's." 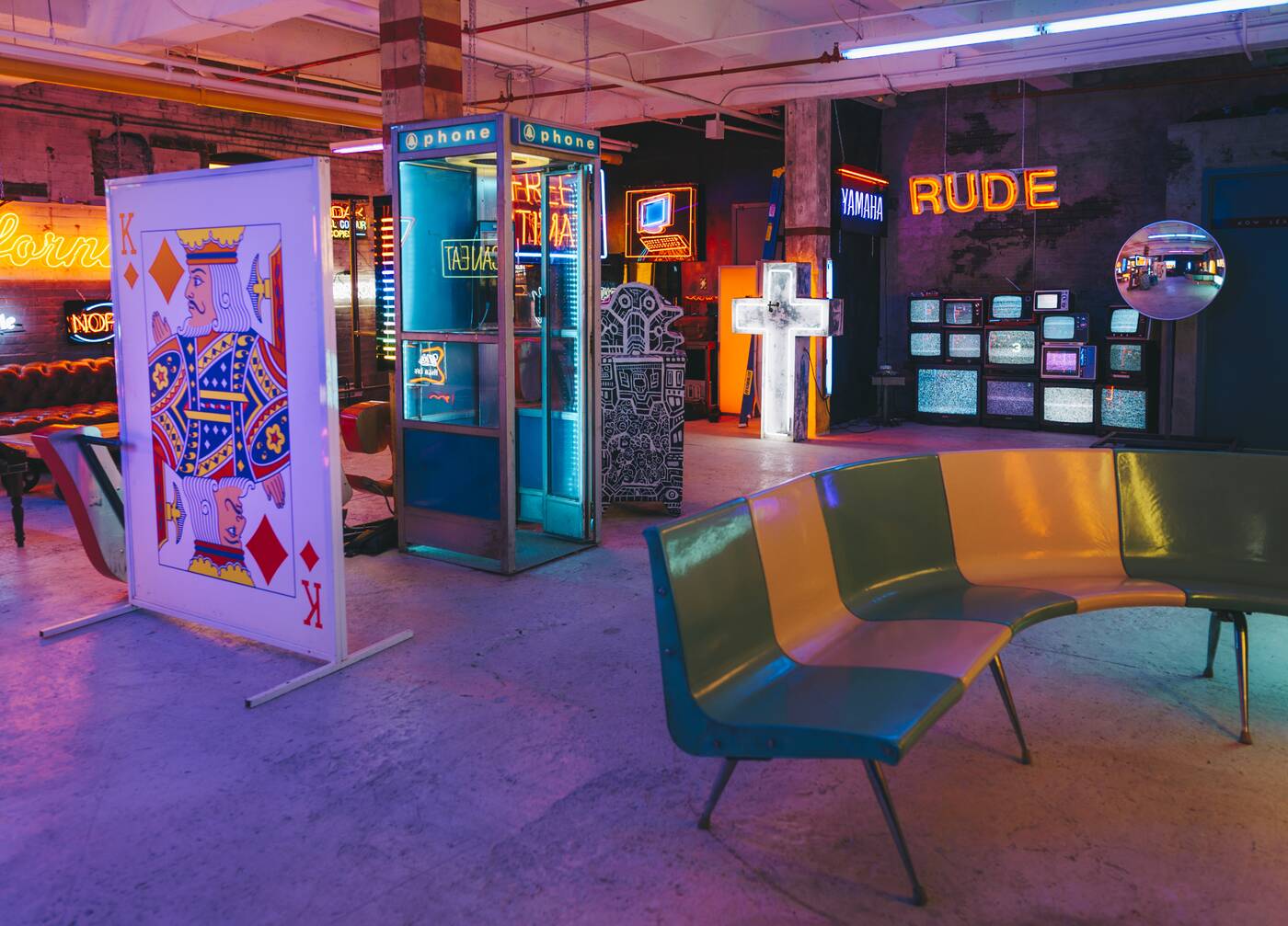 That piece — a simple yellow "film + cameras" sign he acquired from "a guy who was touring with the Lion King" sparked an obsession of sorts.

He's also worked with artists to modify a lot of the pieces he's picked up — like a traditional "OPEN" sign he cleverly rearranged to read "NOPE." 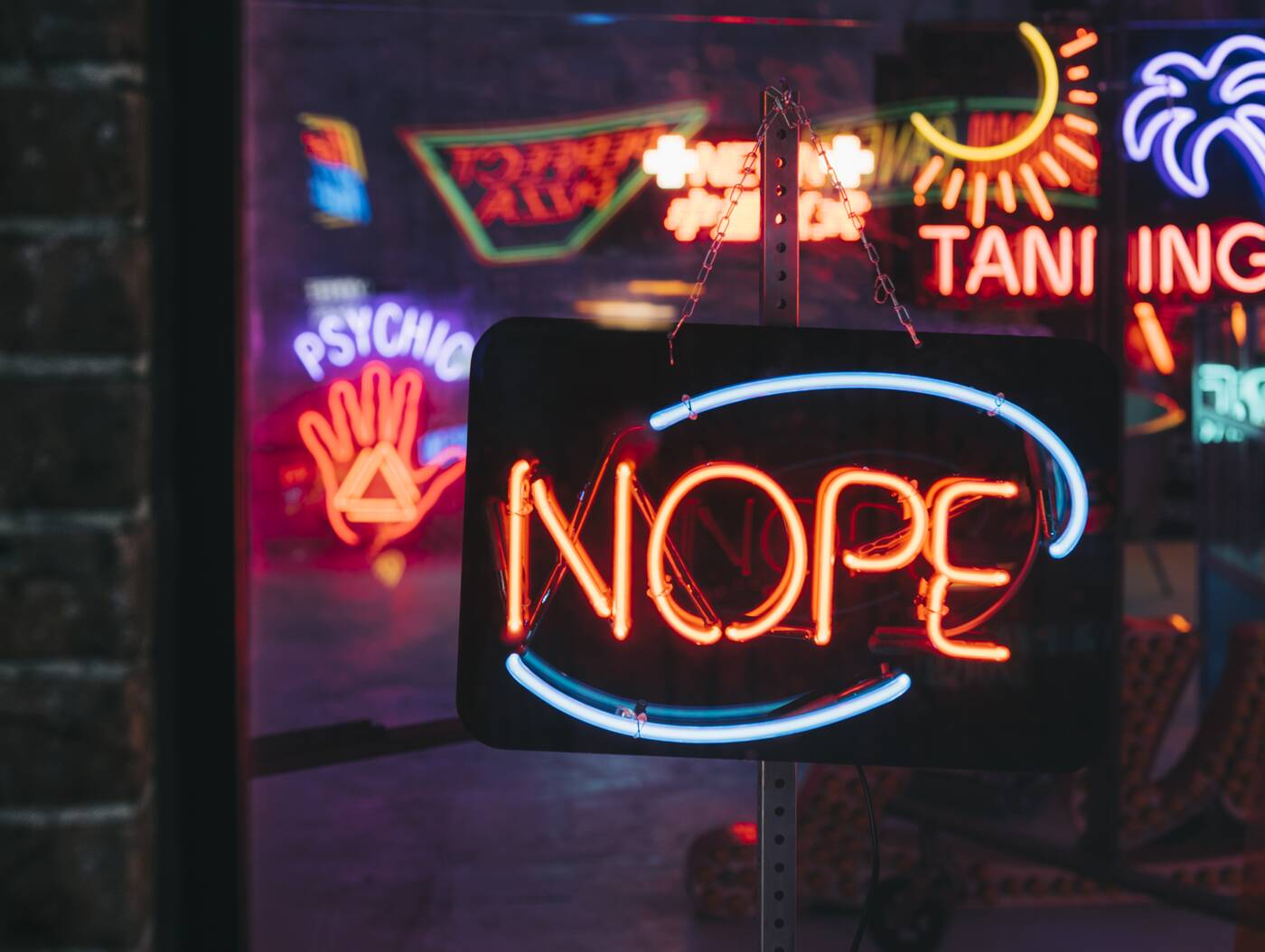 "I sort of fell in love with it because neon is like, the only source of light that tells a story, when you think about it," he explains. "And it's this technology that's over 100 years old but it still feels like it’s from the future."

He explained, while neon signs have seen a drop off in recent decades, there are tons of spectacular pieces up for grabs in and around the GTA.

"The thing with neon is that a lot of it is just passed down through so many hands, because it can last for so long," he said. "If it's made well it can be left on 24/7 for 50+ years."

Simo points to a giant California sign with 150 feet of red neon on his wall as an example. 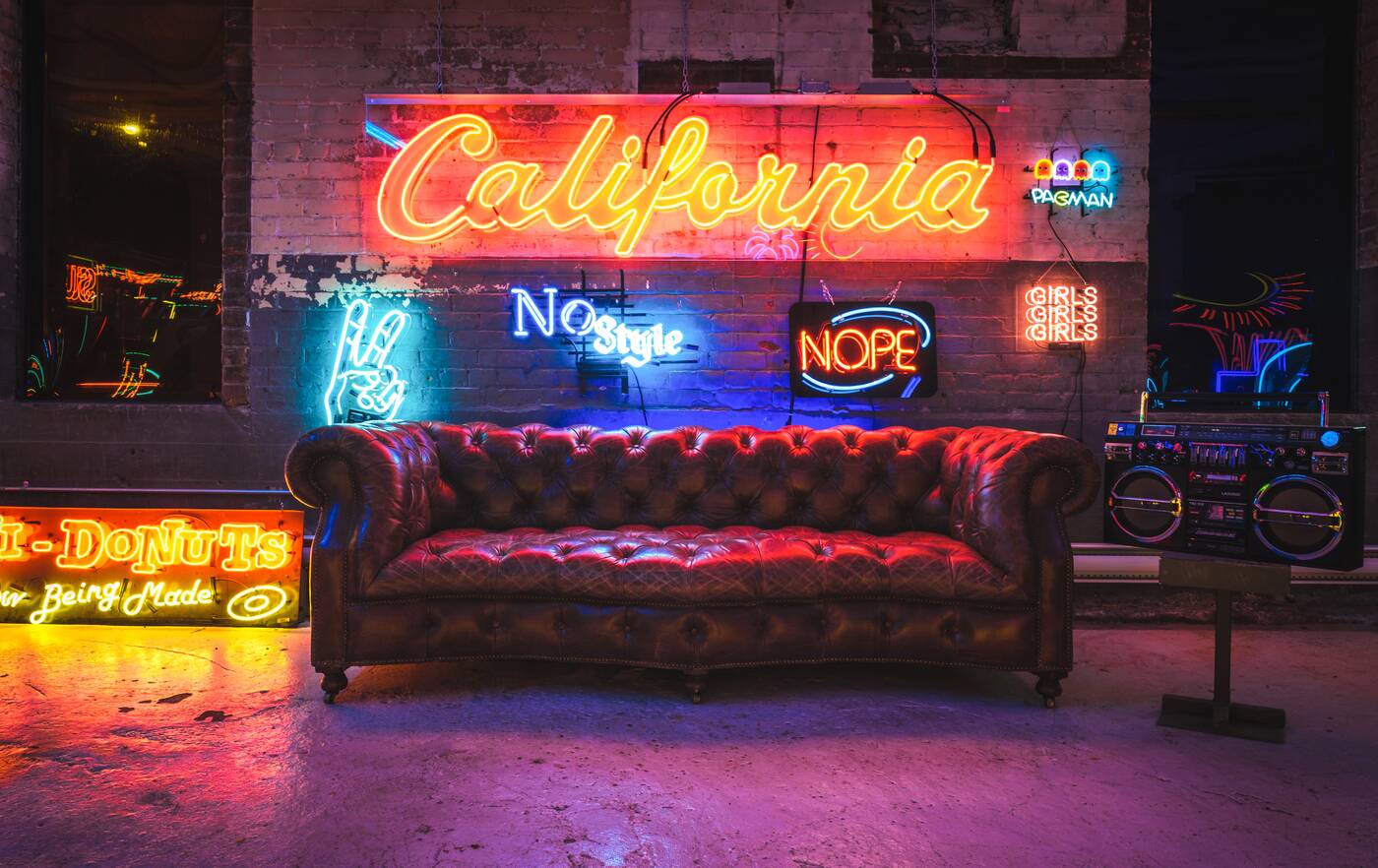 "I got this one at an estate sale," he says. "A widow was selling everything from her husband's storage locker. He was a prop master in the film industry in the 90s."

The sign is said to be from a movie shot somewhere in Ontario, though Simo doesn't know where. What's most tragic is that it was "just sitting there in storage" — like the Sam the Record Man turntables at Yonge-Dundas Square did for more than decade.

"My sort of long term goal is to start to partner with the City of Toronto," says Simo. "They have so much neon in storage." 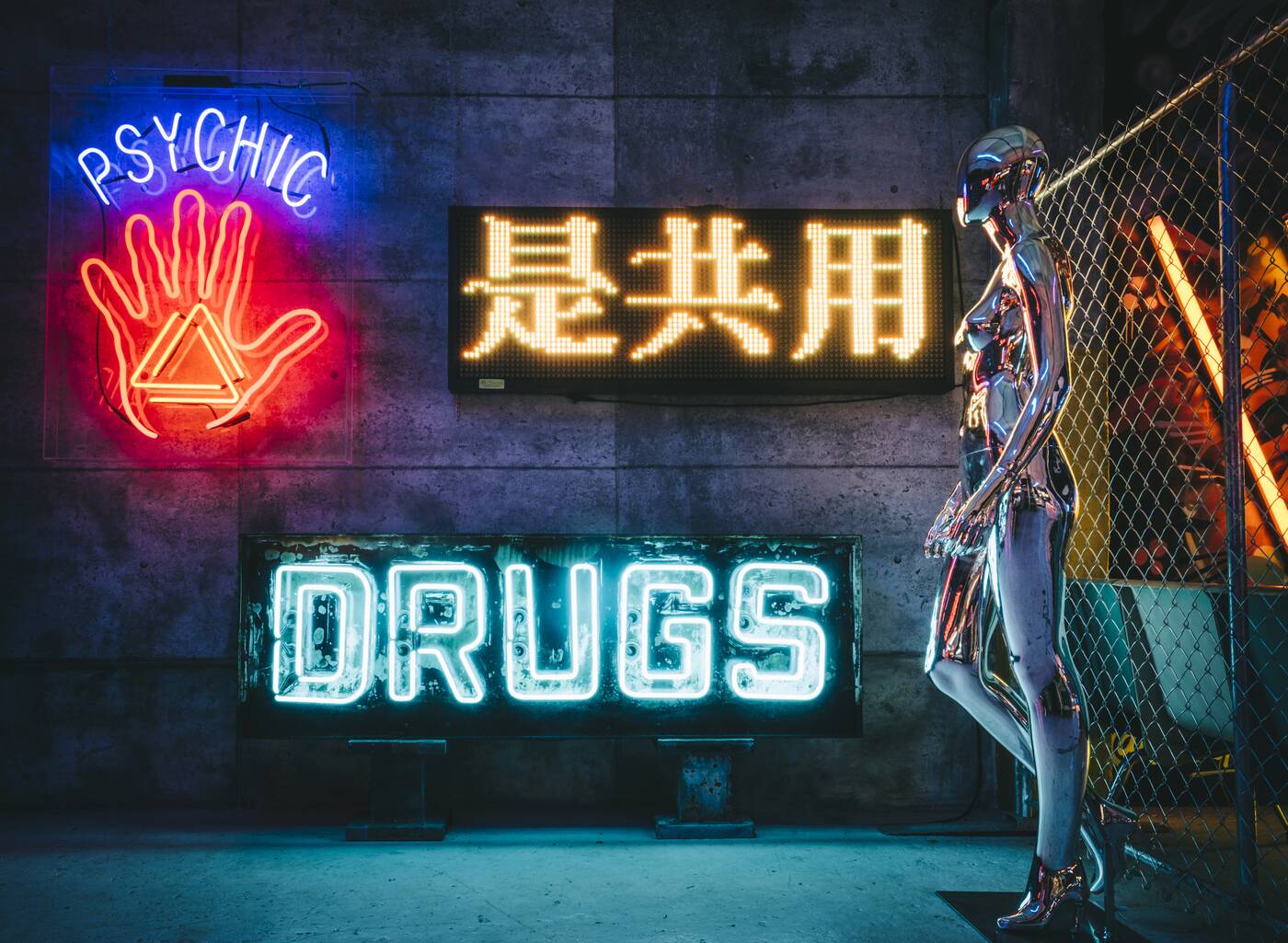 Simo credits Mark Garner, head of the Downtown Yonge B.I.A. as his inspiration.

"He's been the one spearheading the neon museum of Toronto for the past five years," he notes. "He was the one who got the Sam the Record Man sign back out.

"I've been sort of doing a miniature version of what he's trying to do on a larger scale."

He's off to a good start with the original "F" and "U" from the Future Shop sign at Yonge-Dundas Square in his possession. 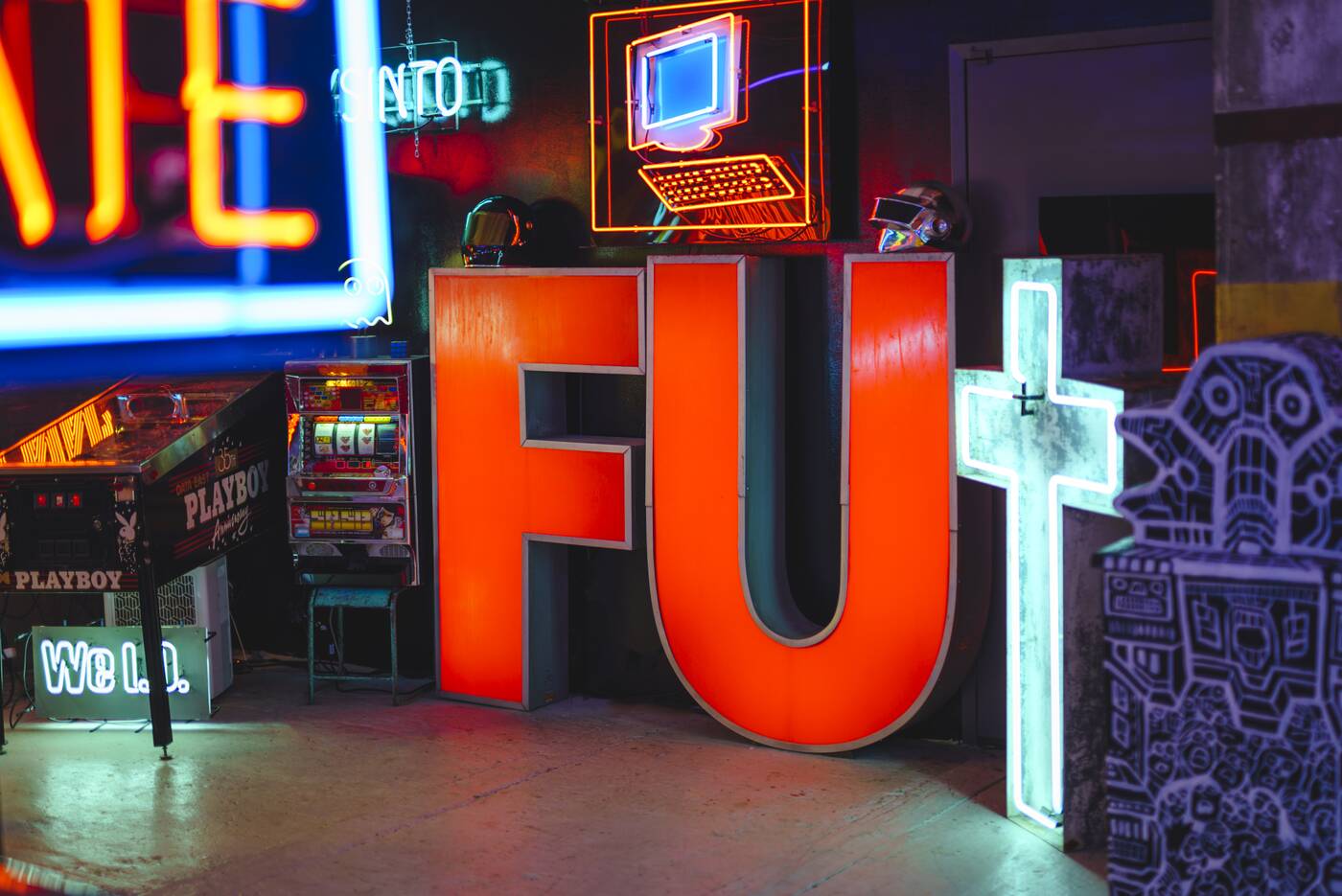 Simo says he traded an ice cream sign from Lick's for the pair.

"Someone online said 'I'll give you two letters for your big sign'," he said of the trade. "I got the best letters."

He also recently scored some giant neon numbers from a Gap Store. The 1969 was white, originally, but he painted the date to add some more colour. 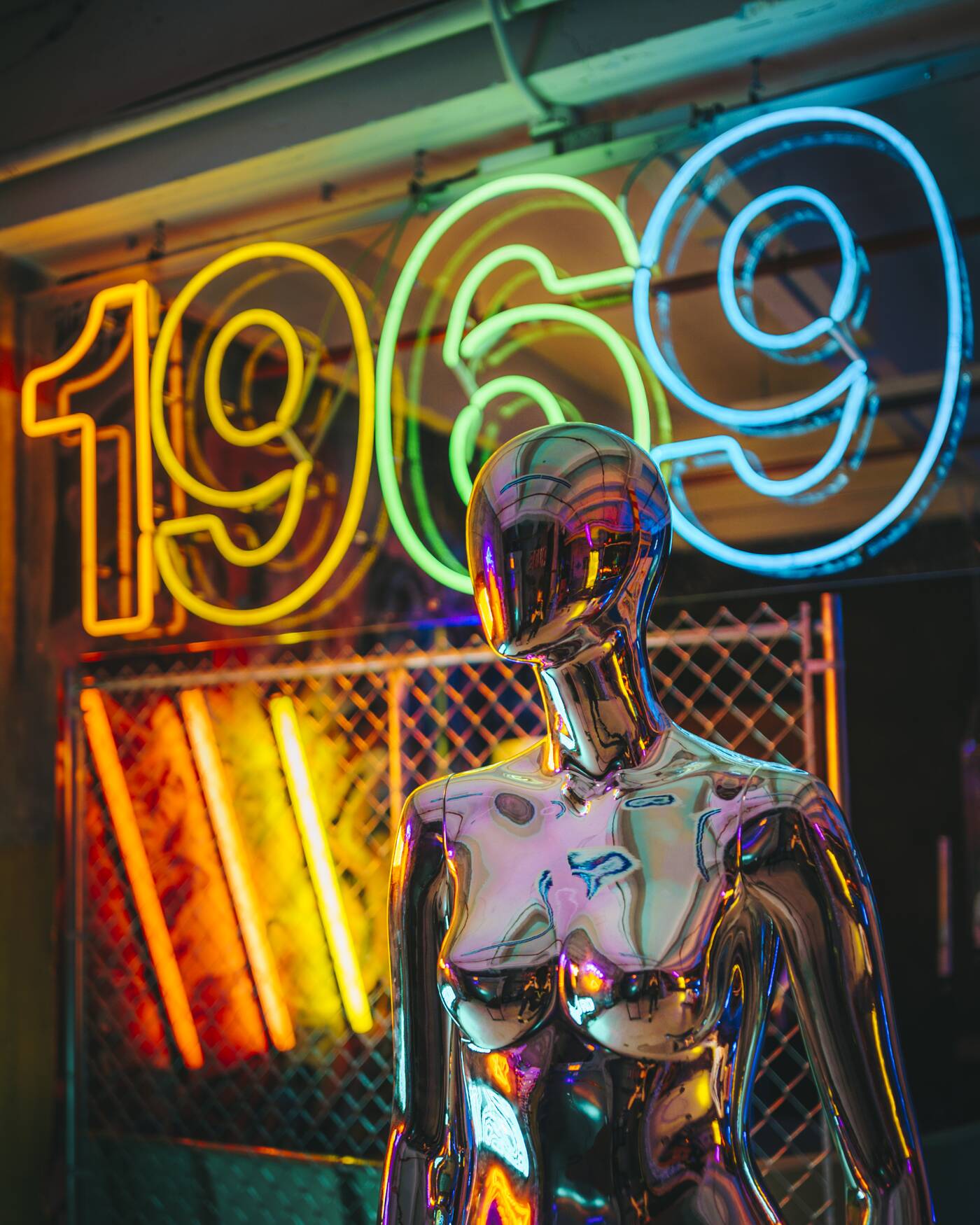 Not all of the pieces at Neon Demon are from Toronto. Along with doing his own smart research, Simo works with salvagers who tip him off to cool finds all over North America.

His phone booth is from Buffalo (equipped with a real payphone from an old Coffee Time in Toronto) and the giant glowing cross was sourced from Wildwood, New Jersey — a neon-rich city that Simo describes as "a budget version of Vegas." 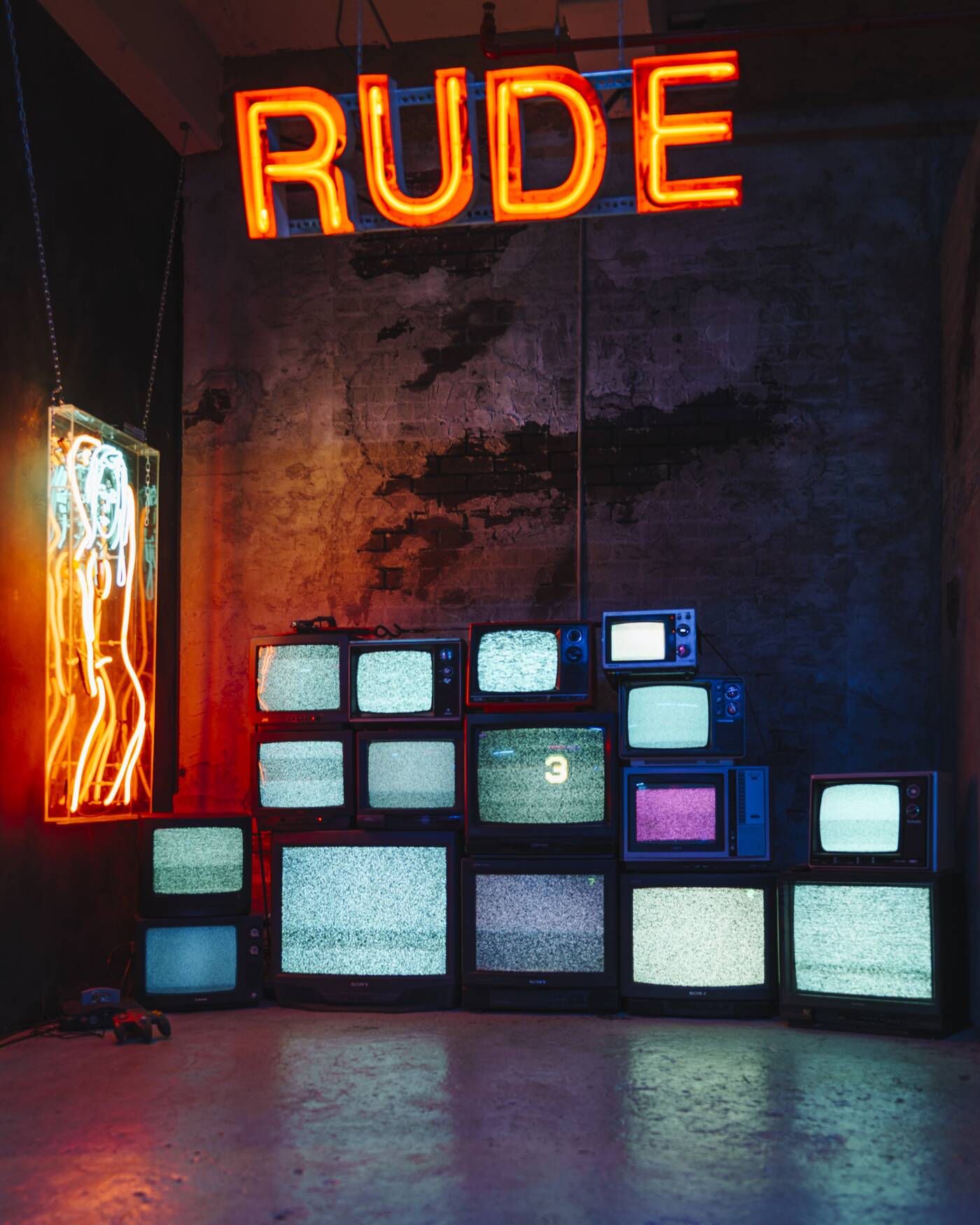 Still, he's got some solid gems from here in the city as well.

He calls his giant Lucky Red sign, from two now defunct Chinese Restaurants in Toronto, his most iconic.

"When I got it, one of the lights were hanging out, it had a haggard extension cord, I had to lean it against the wall. It had 360 light bulbs - all drawing about 11 watts — generating massive amounts of heat and energy." 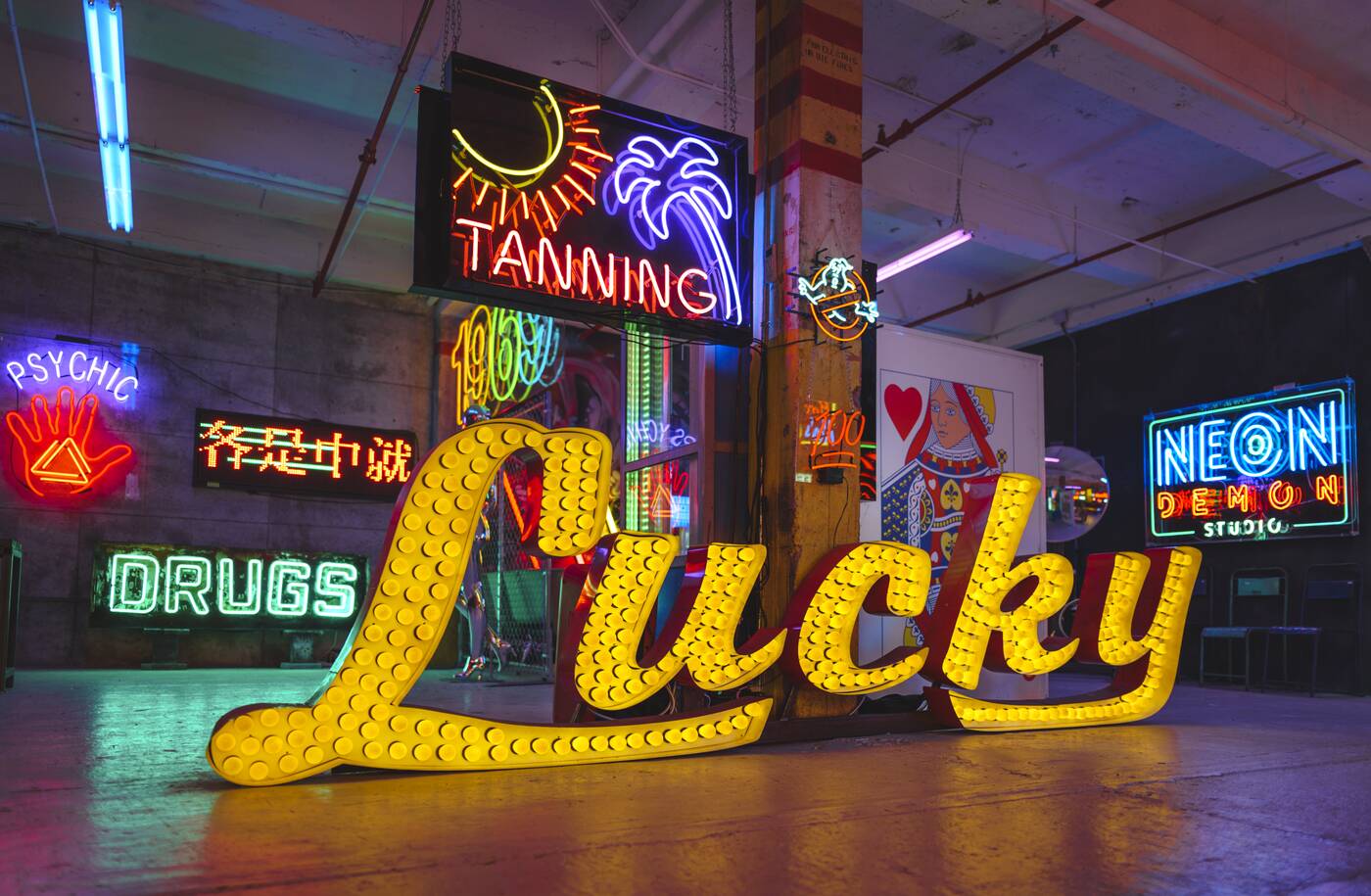 He gave the sign a new backing frame and converted everything to LED lights after acquiring it from a salvage yard friend.

Now, it's part of a backdrop used by brands and music artists who rent out the studio for creative shoots (like Shawn Mendes, who filmed some MMVA promo commercials at Neon Demon just last month.)

Everything, from the vanity area to the fuzzy TVs are controlled by Simo's iPad using Apple Home Kit. It's impressive to watch him turn the entire studio black with just a few words to Siri. 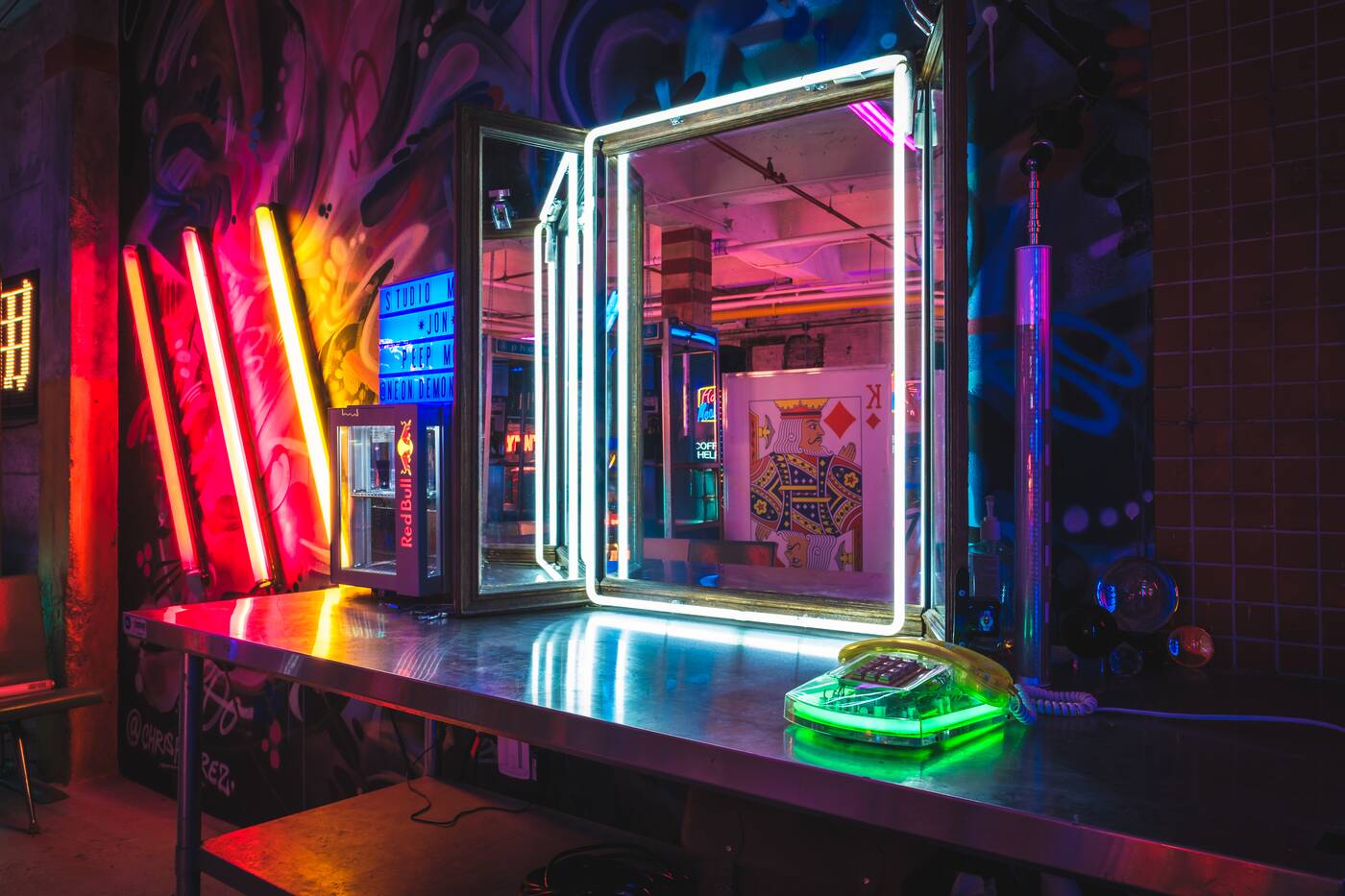 Neon Demon isn't open to the public, per se, but people do like to peek through the windows. A lot.

"At night there's this glow onto the street," explains Simo. "Cars will stop. People all the time will walk by and press their face against the window."

"I always have to clean grease off the windows," he laughs. "I'm cool with people kind of taking a peek and stuff." 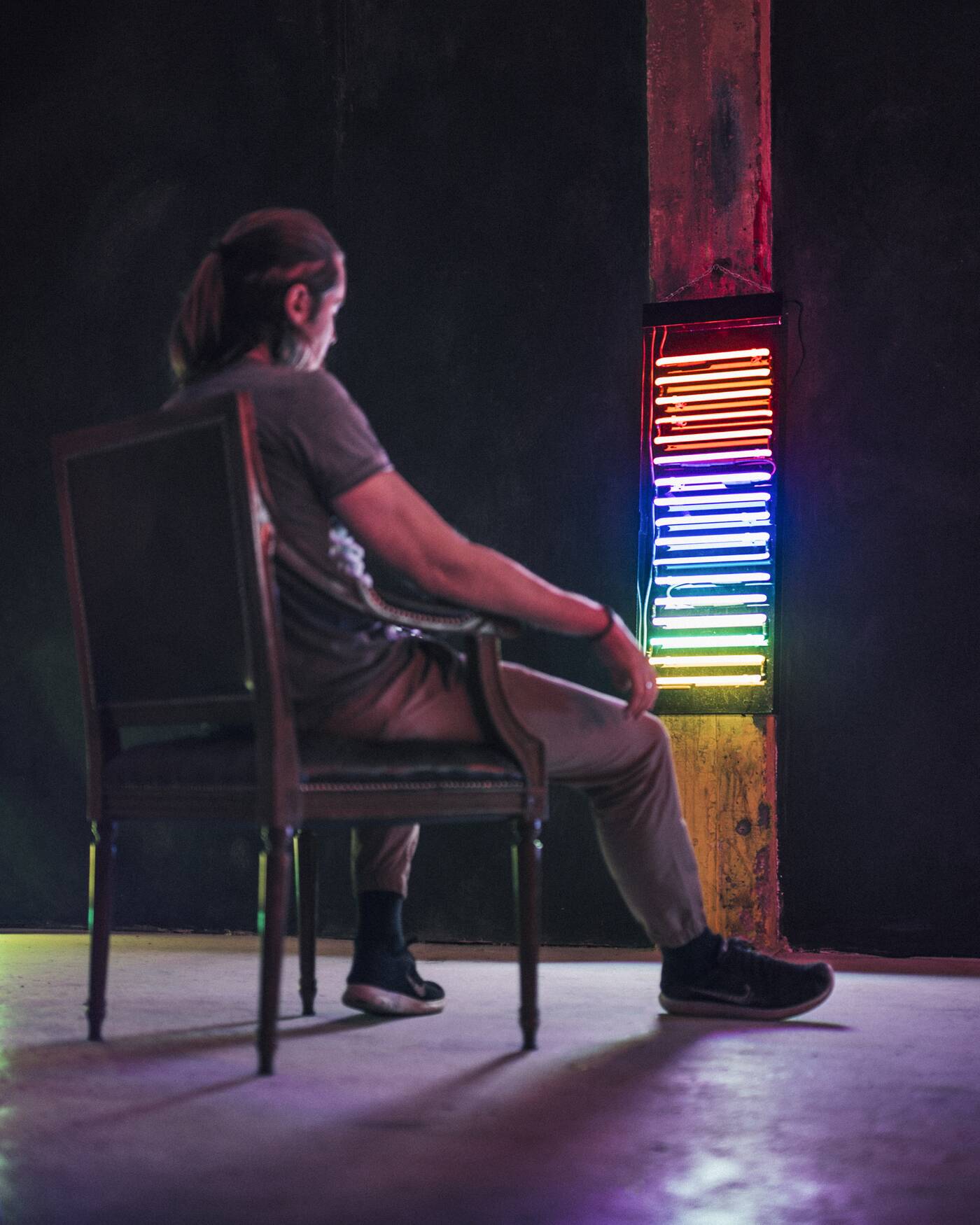 He definitely knows enough about neon at this point to lead a tour.

"I've been trying to teach people as much as I can about neon, because people don’t really know the history or how they work," he said during our interview, pointing to a neon rainbow sampler of the most common colours.

"Most people don’t know that the TD sign is neon. That's why it’s so damn bright."

The bank used so much neon for its unmistakable sign high atop Toronto, in fact, that Simo says it now actually owns the neon colour green.

You can see for yourself if you ever get a chance to visit the studio. You won't find a single tube of that bright green shade without a tiny "TD green" mark printed on one side.