Bar Fancy is currently open but their offerings and services may be affected due to the pandemic. Please contact the business directly for more information about any changes. Is this your business? Please contact us if you would like to update this message.

Bar Fancy is the kind of place that doesn't want to be taken too seriously, and the first thing about this new spot on West Queen West just east of Dovercourt that you shouldn't take to heart is the second part of its name.

To get inside, face the front window full of plants, resist the urge to enter the doors on the right, and head instead down the alley on the left where you'll see a neon sign of a tiger head. (Thank the architecture studio above that owns the building for this process.) 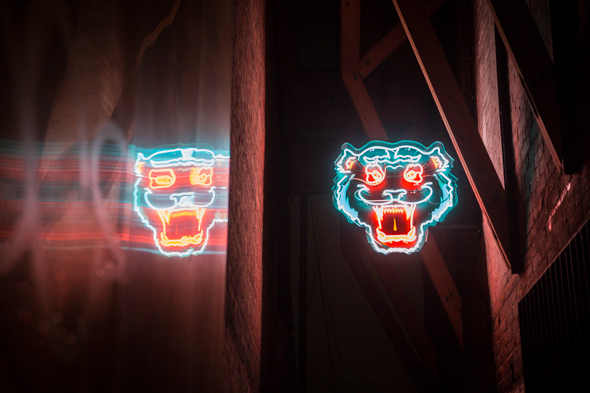 The shiny brass panels framing its exterior may give the impression of swankness, but once you get inside, you'll realize the vibe here is a laid-back, low-key kind of cool. To give you an idea, Vice recently held its holiday party here. 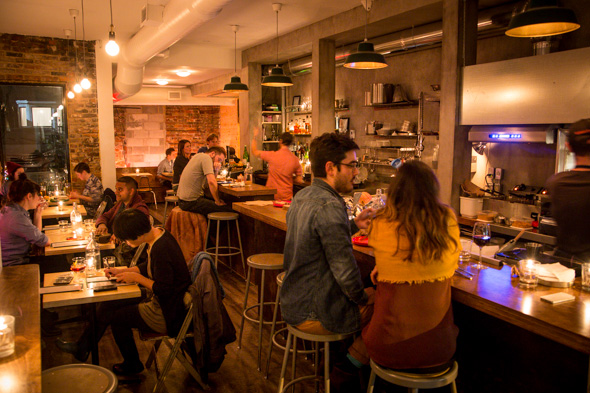 There's minimal decor in this dimly-lit rectangular space; in addition to the plants, some folding chairs hang on the exposed brick wall. Half the area behind the smooth wooden bar counter is devoted to a small open kitchen while the other half is the actual bar, a subtle indication that the food may be equally as important as the drink here. 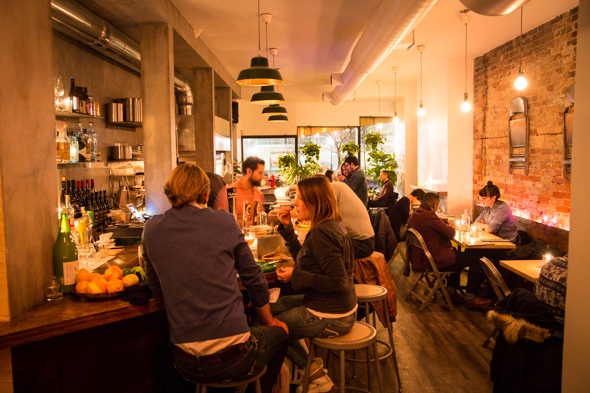 Owners/chefs Jonathan Poon and Jesse Fader want the place to be the neighbourhood go-to for after-work or late-night drinks and crave-worthy bar snacks. Poon is owner/chef of the well-regarded Parkdale fave Chantecler and Fader was his sous-chef there. Now a baseball-capped Fader (who also worked in the kitchen at Mark McEwan's Fabbrica) is cooking solo here most nights while Poon moves between both operations. 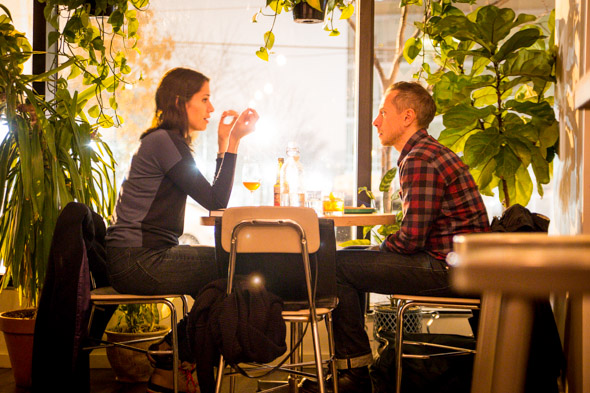 A quick look at the drinks menu reveals it's pretty straightforward, with four draught beers (Guinness and Steam Whistle for $7, Beau's Lug Tread or Bogwater for $8); seven bottles/cans ranging from $6 (Tiger, Muskoka Detour, Howe Sound Lager) to $15 (Beau's Kissmeyer); a 750-mL bottle of French cider ($35); and seven wines by the 5-oz glass ($10-$13) representing Ontario, plus European grapes from Austria, France or Greece, and even bubbly from Hungary. 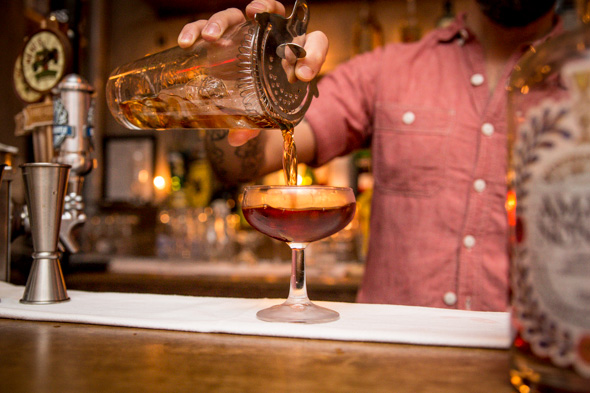 I immediately notice there aren't any cocktails listed. Fader tells me they originally only wanted to serve beer and wine, but since Toronto is currently a cocktail-crazy town, they relented and will make them by request, which has kept bartender Joey Tanner super busy; he claims he's been mixing more drinks here than when he was working at Bar Isabel . 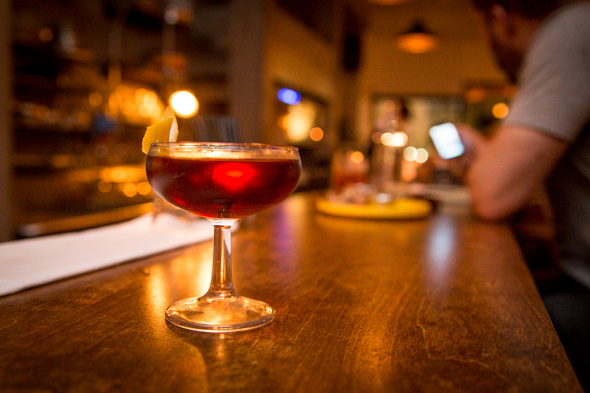 Since I'm guilty of being one of those cocktail-loving Torontonians, I ask Tanner to make me a drink of his choosing, and he brings over a concoction he's named the Sergio Leone ($13): 5-year Flor de Cana rum, Dolin vermouth, Fernet Branca and a lemon peel garnish. It's herb-y, a little bitter and makes for a nice digestif, which means I should probably get some food in me first.

That menu, like everything else, is uncomplicated, with about a dozen classic bar snack items priced between $3 and $16 (if you really want to splurge, there's a 24-oz ribeye for $85). The original idea was only to serve oysters and fried chicken, but "Toronto is such a fickle bitch - she always wants more," says Fader. Damn right she does, especially when the eats are this good. 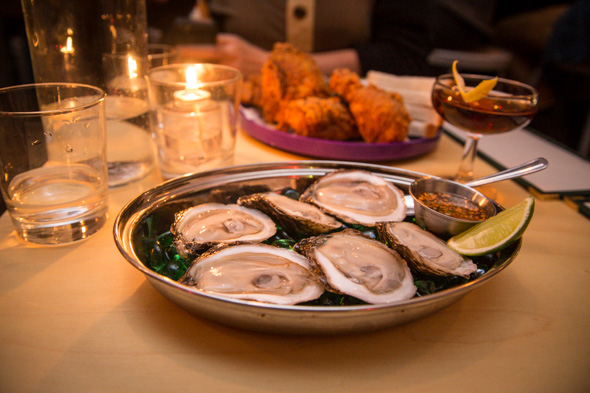 Half a dozen oysters ($16) are served with a wedge of lime and what tastes like a Vietnamese-inspired mignonette. Then there's an artichoke dip ($5) with crushed nori and sesame seeds sprinkled on top that's surrounded by Ritz crackers. Fader describes what they're doing as "a quasi-serious approach to not-really-serious food," and this is a perfect example of that. It's crackers and dip, but that dip sure is done well. 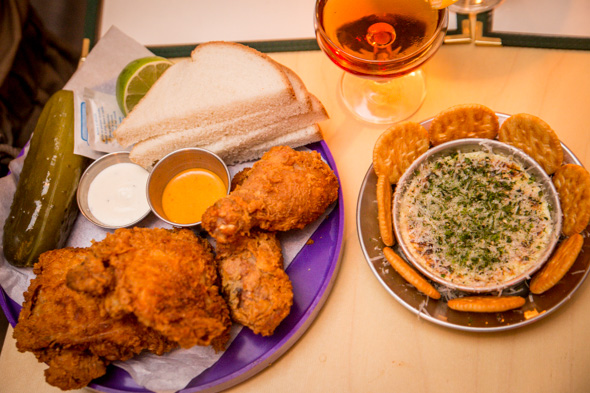 The piĂ¨ce de rĂŠsistance though, is the fried chicken plate ($16). Four big pieces of delicious, deep-fried bird with a crunchy, flavourful exterior (I think there's five-spice in the batter) and moist, juicy meat inside. It's satisfying stuff, especially because it's accompanied by slices of Wonder Bread, pickles, lime, two sauces (habanero and mayo) and wet naps. Make-your-own-fried-chicken-sandwich, anyone? 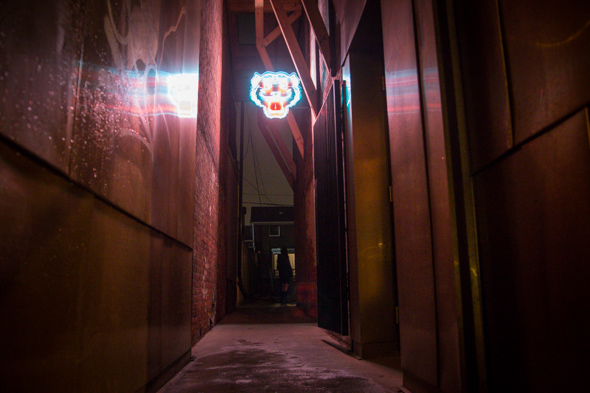 Fans of oysters and fried chicken should take note that every day from 5pm to 7pm, the first two hours the bar's open, there's a deal where oysters are half-off and fried chicken is $2 per piece with the purchase of one alcoholic beverage per person, making this the ideal post-work hangout. Oh, and the kitchen stays open 'til 2am - hellooo, late-night eats. 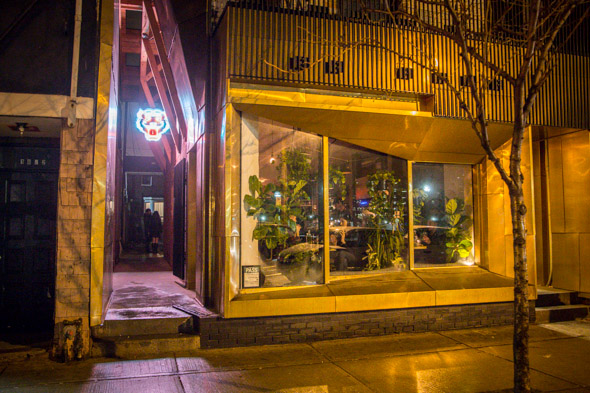