Graffiti Alley might be Toronto's most unexpected tourist attraction

As in most urban cities, graffiti has been a point of contention for all parties involved. Toronto's business owners, artists, and politicians can't seem to decide how to differentiate between vandalism and art.

Few of the latter were more notable than the late Rob Ford, whose attempts to curb graffiti sparked one of the most public conversations about graffiti to date. 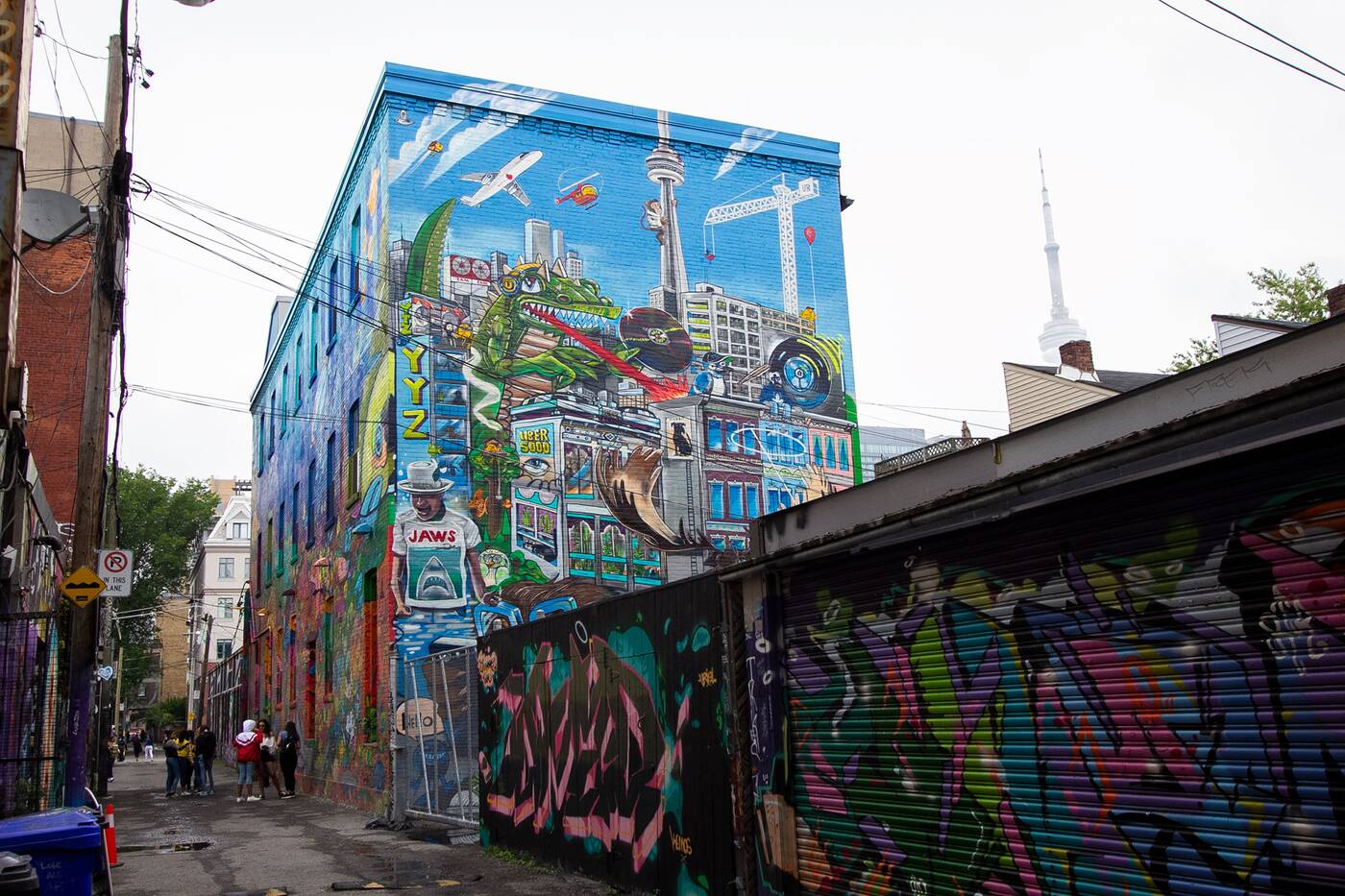 It's so ironic then that, today, Ford's image makes a cameo in a massive piece of street art that's arguably one of the most Canadian murals ever, located in one of Toronto's most iconic backstreets: Graffiti Alley. 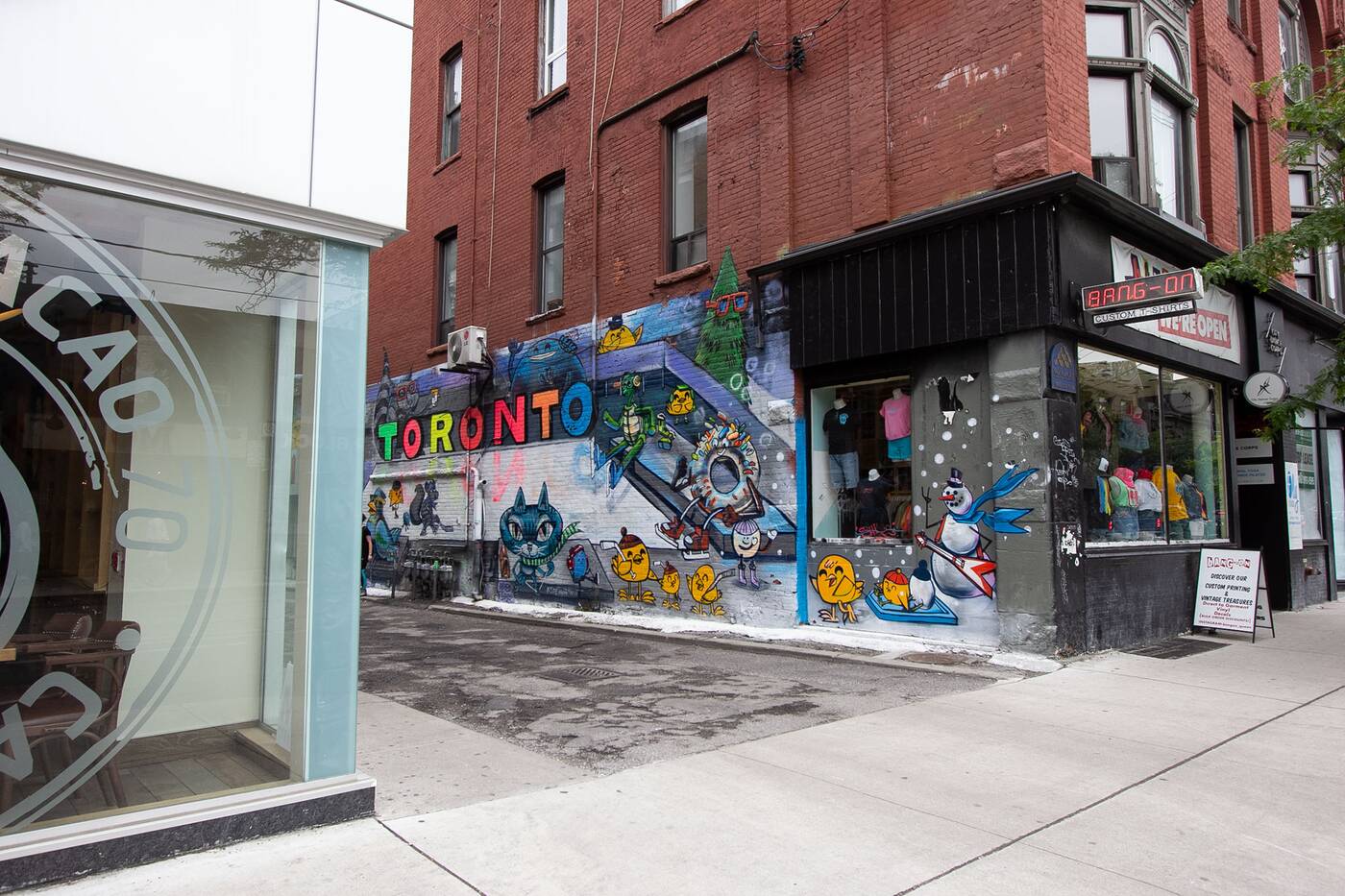 Canonized by the tilting camera work of Rick Mercer's weekly rants, this little stretch of grimy back-alley between Spadina and Portland Street is best accessed from Queen, heading South along the t-shirt print store Bang-On. 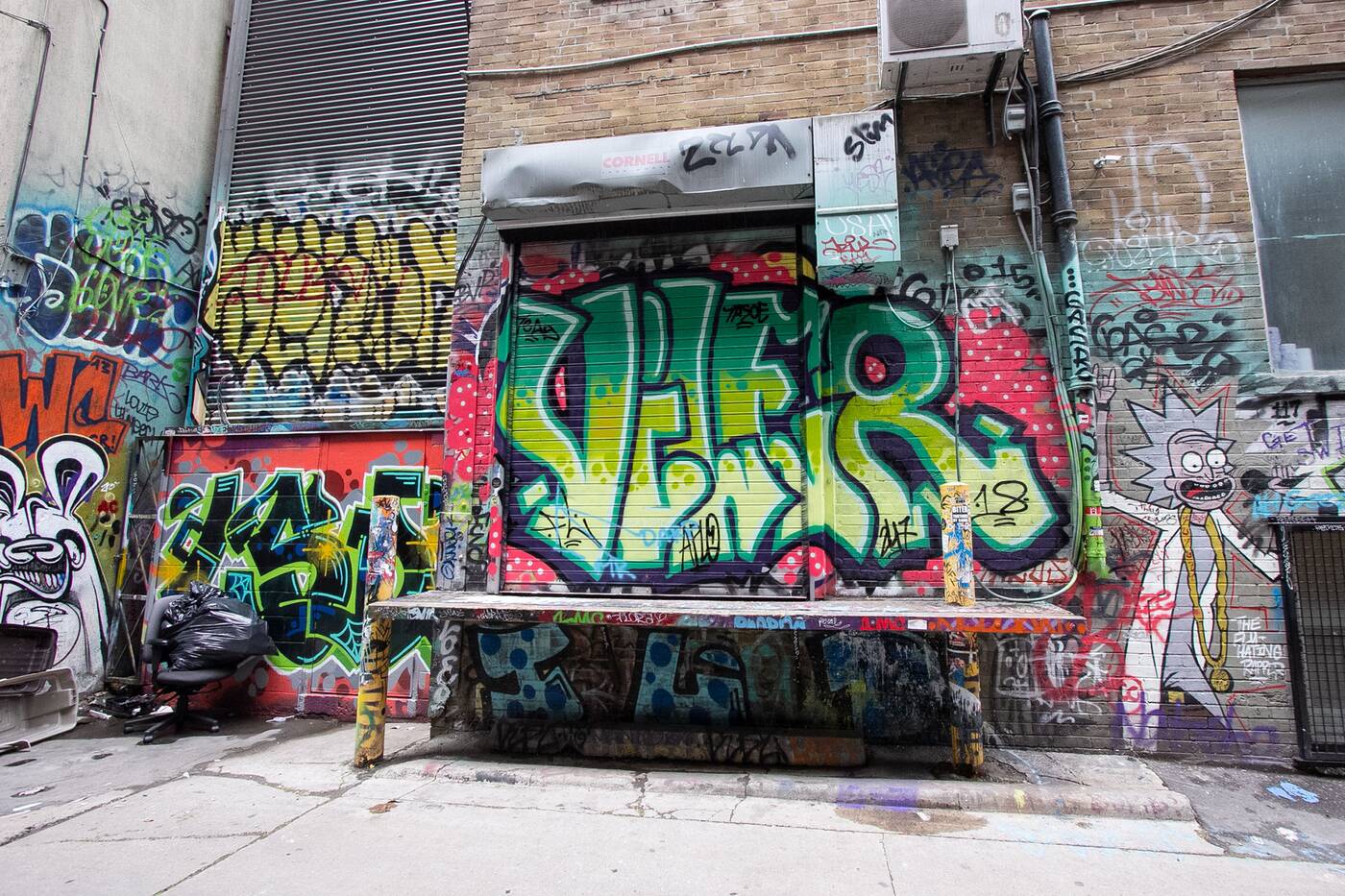 Sometimes referred to by its adjoining alley Rush Lane, Graffiti Alley is more than a series of murals, mesmerizing as they are: it represents a watershed moment in Toronto's relationship with legalized street art. 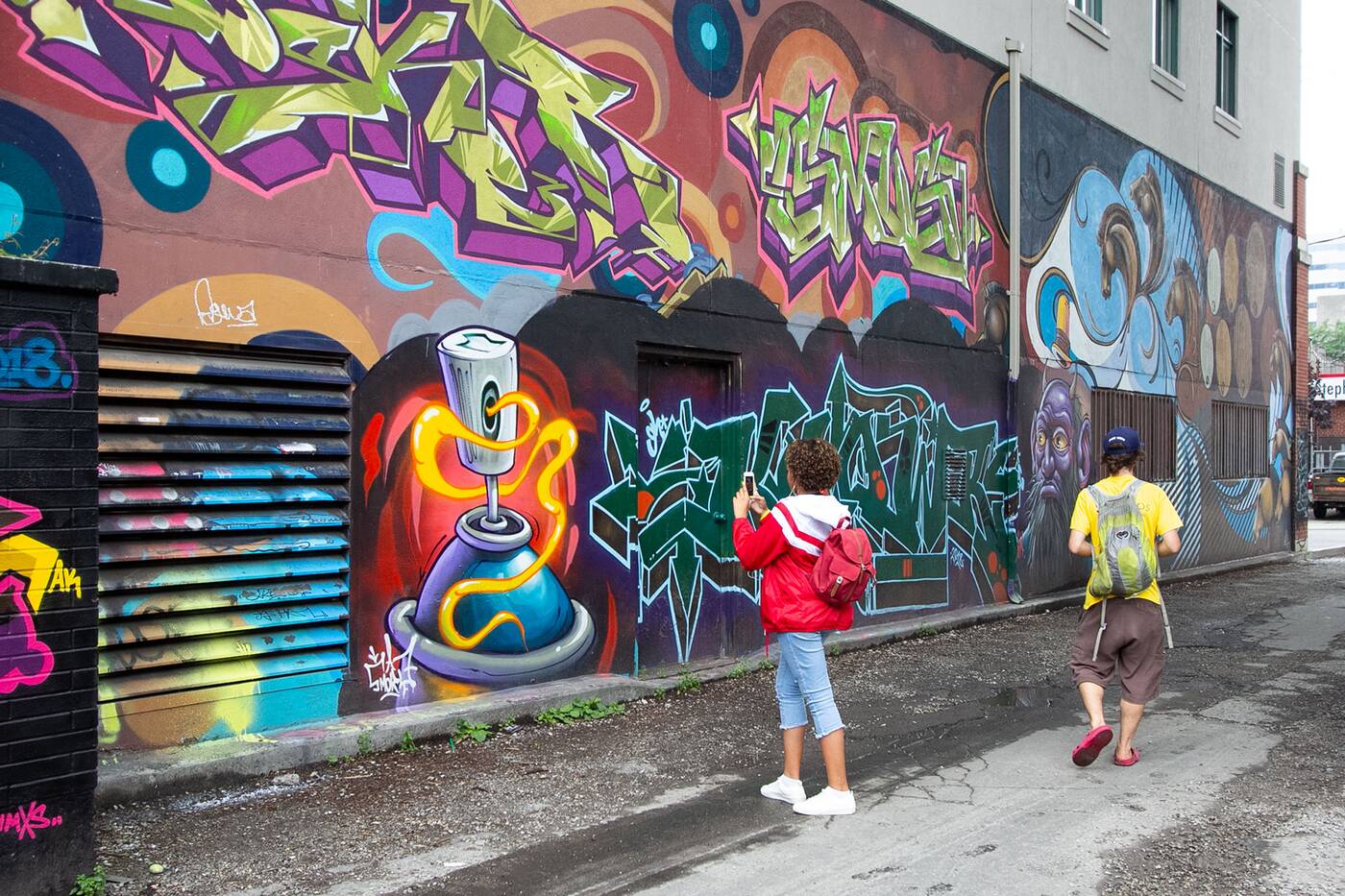 The area of Richmond and Spadina had long attracted the work of artists like SKAM and other members of the DOH and HSA crews before Style In Progress began hosting its legal 24-hour graffiti sessions along the nearly one-kilometre stretch. 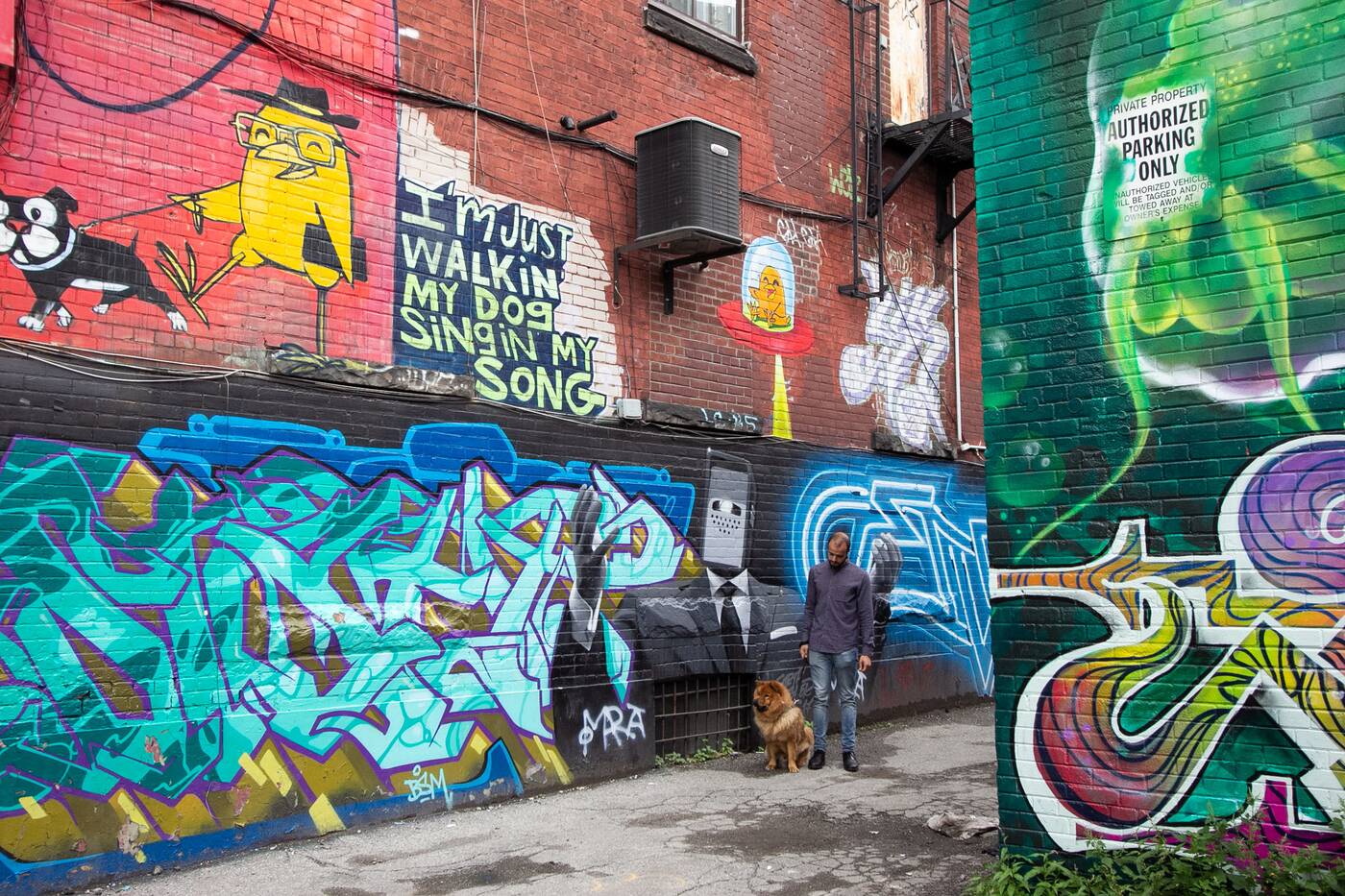 When it was legitimized in 2011 through the efforts of the Queen Street West BIA, it also gave birth to StART — the city-sanctioned program in charge of nurturing legal street art — and paved the way for equally brilliant revitalization projects like the beautiful art of Underpass Park. 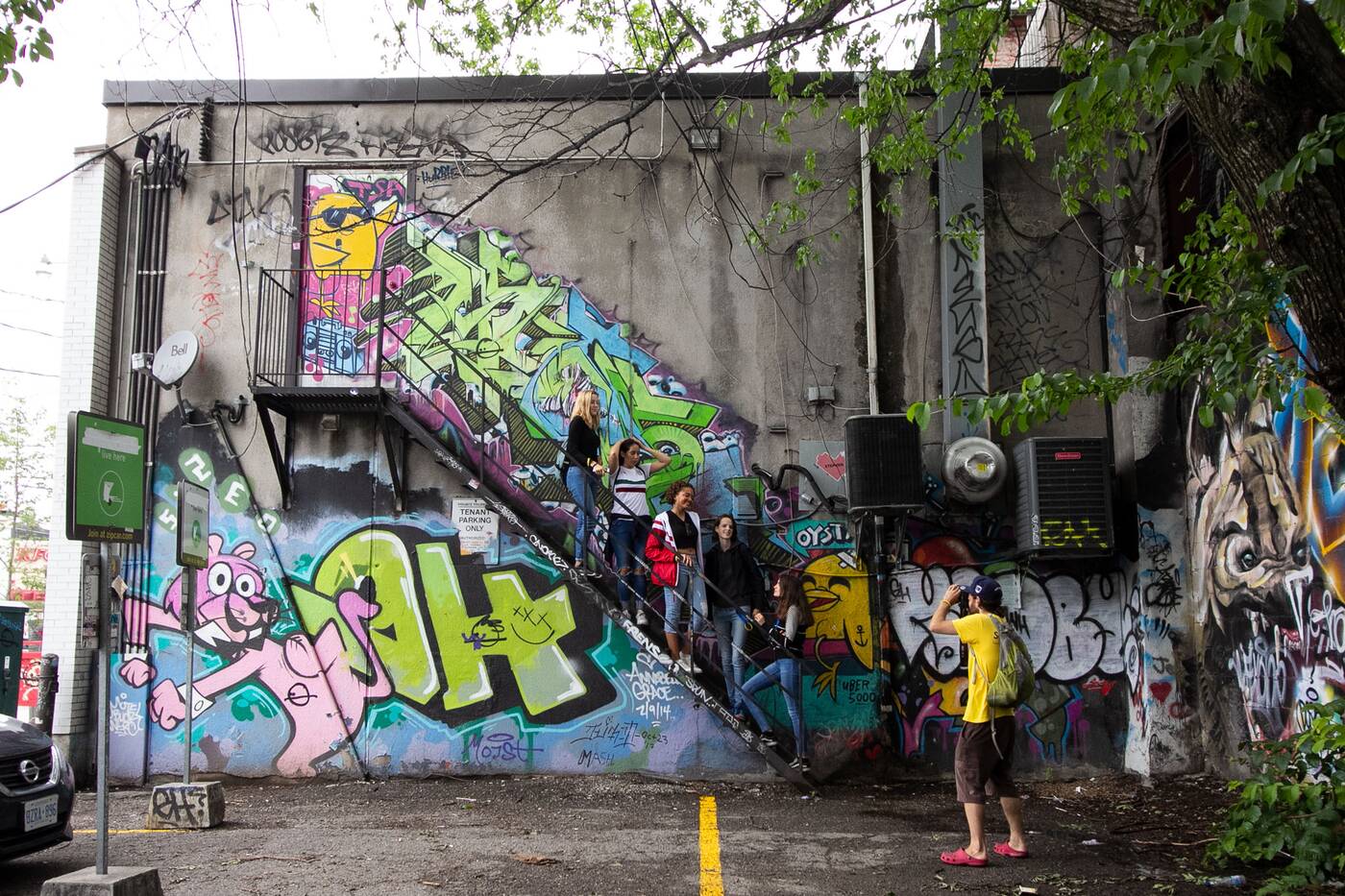 Since then, the alleyway has become a staple feature of the city. It's been the locale for mini street fests, music videos, been the host of Toronto's notorious secret swing, and even has a restaurant named after it. 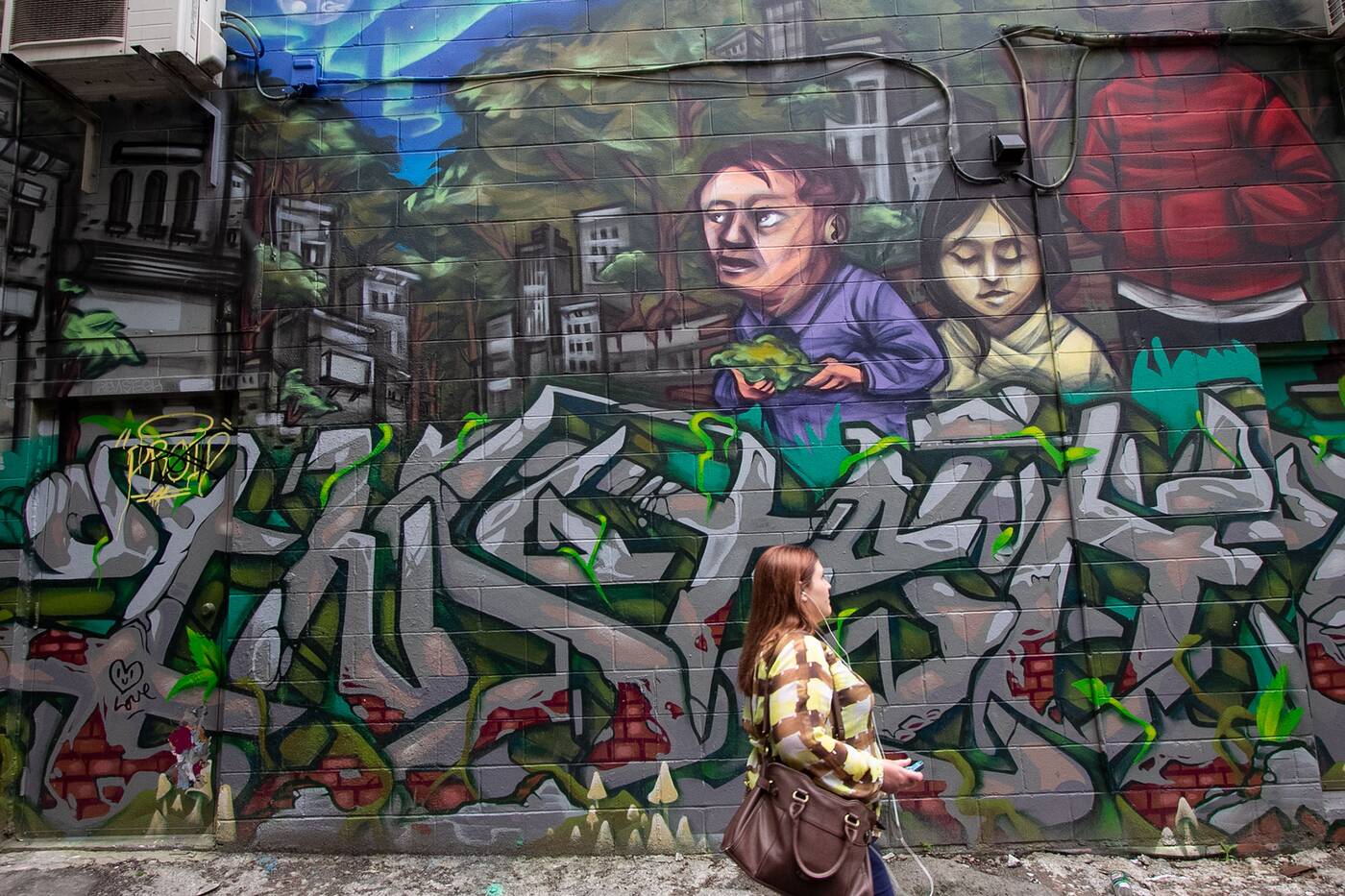 You'll often see guided tours leading huddles of international students as they admire wall after wall of striking street art that have been graced by well-respected writers like Uber5000 (whose little chicks can be found all over the city). 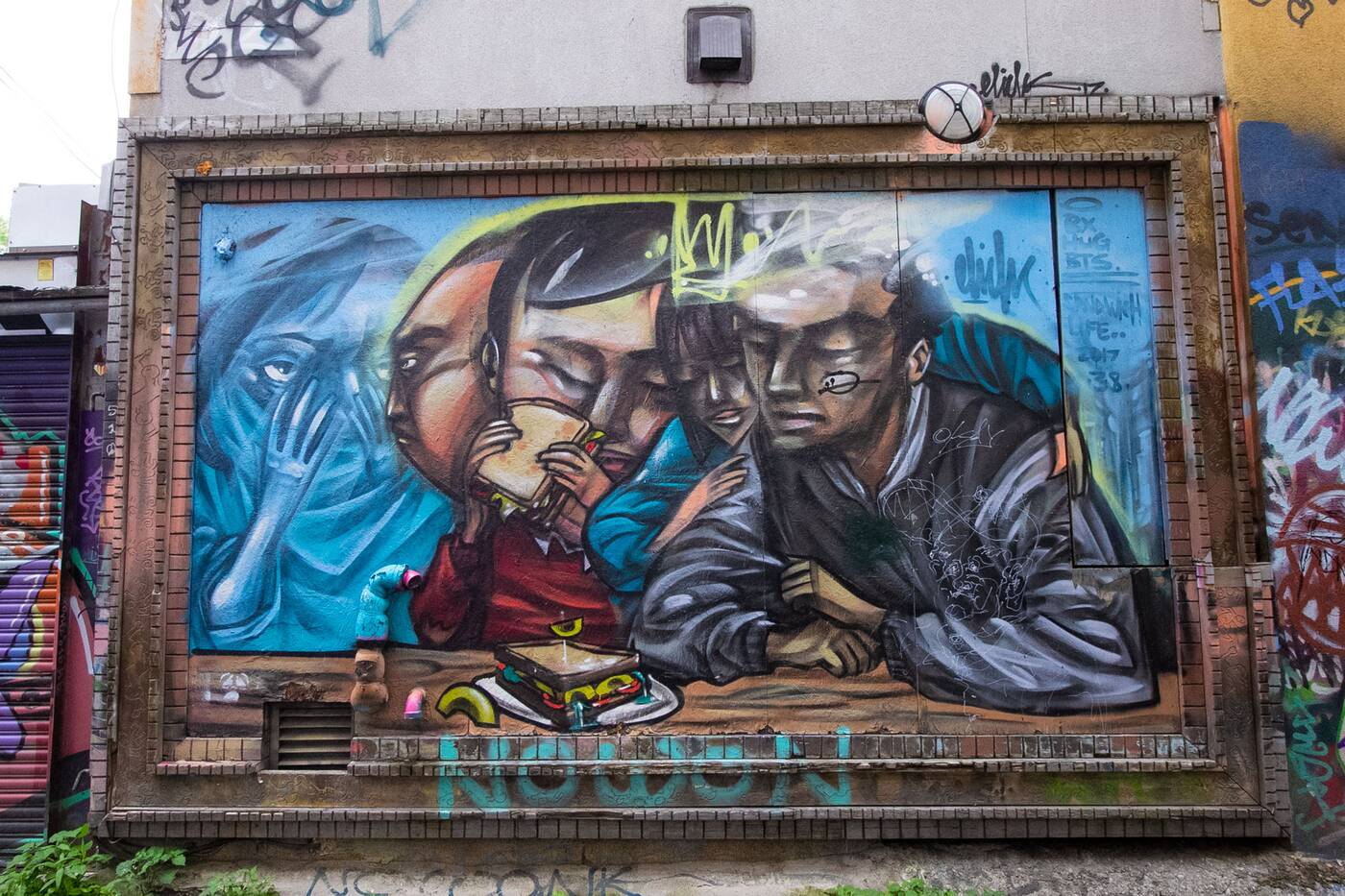 Most murals here have a shelf life, getting painted over time with new work , though if you're well-versed enough in Toronto's graffiti scene you might still recognize the many odes to angels or the sandwich-eaters of ELICSER. 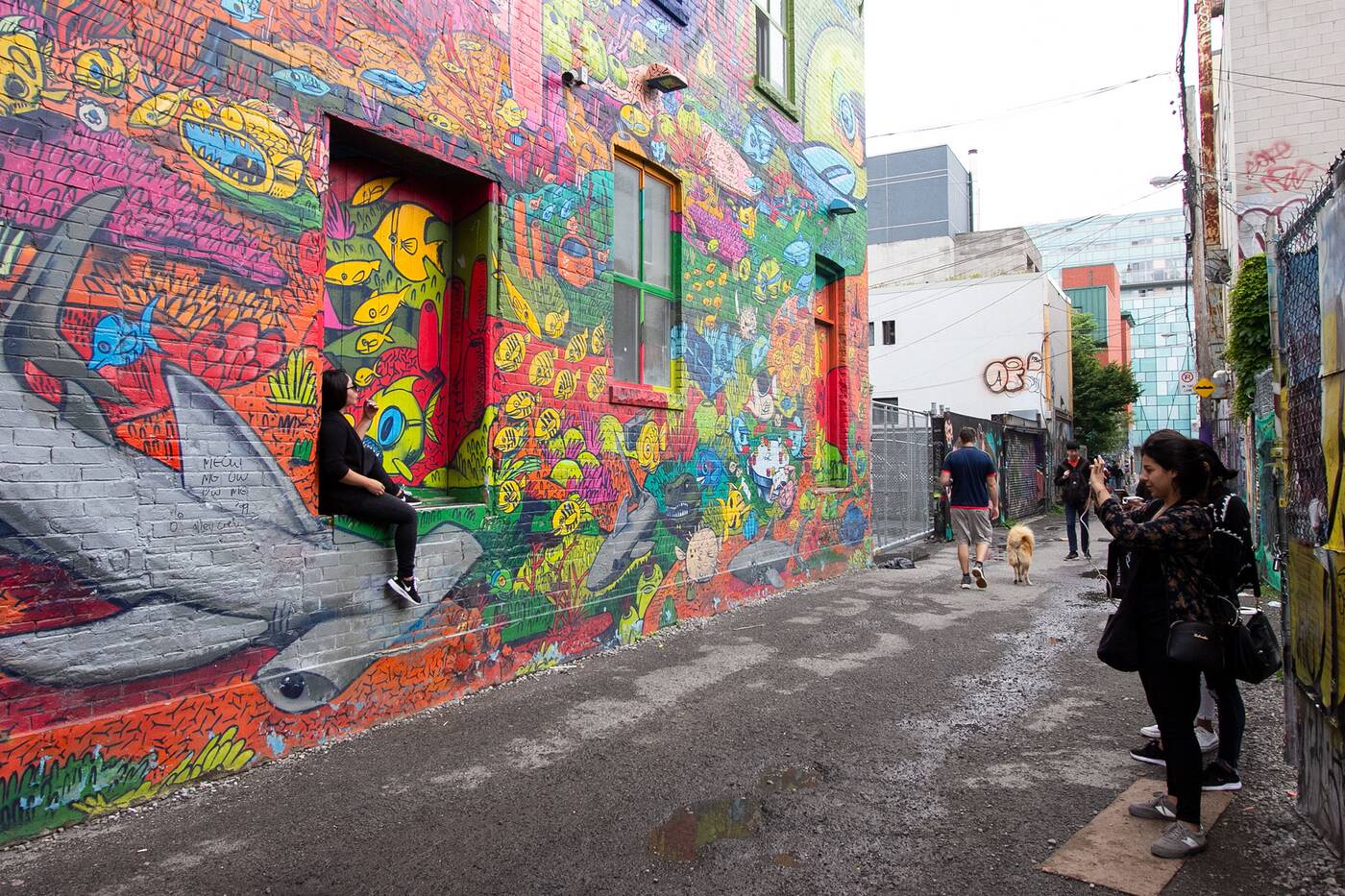 As with most respected art, you won't see much vandalization on these pieces of 'vandalization'. As is the way, there isn't much tagging here.

From the dirty puddles and the soft crush of soggy cardboard underfoot, a walk through the ever-changing museum of Toronto's street art history is appropriately grimy. 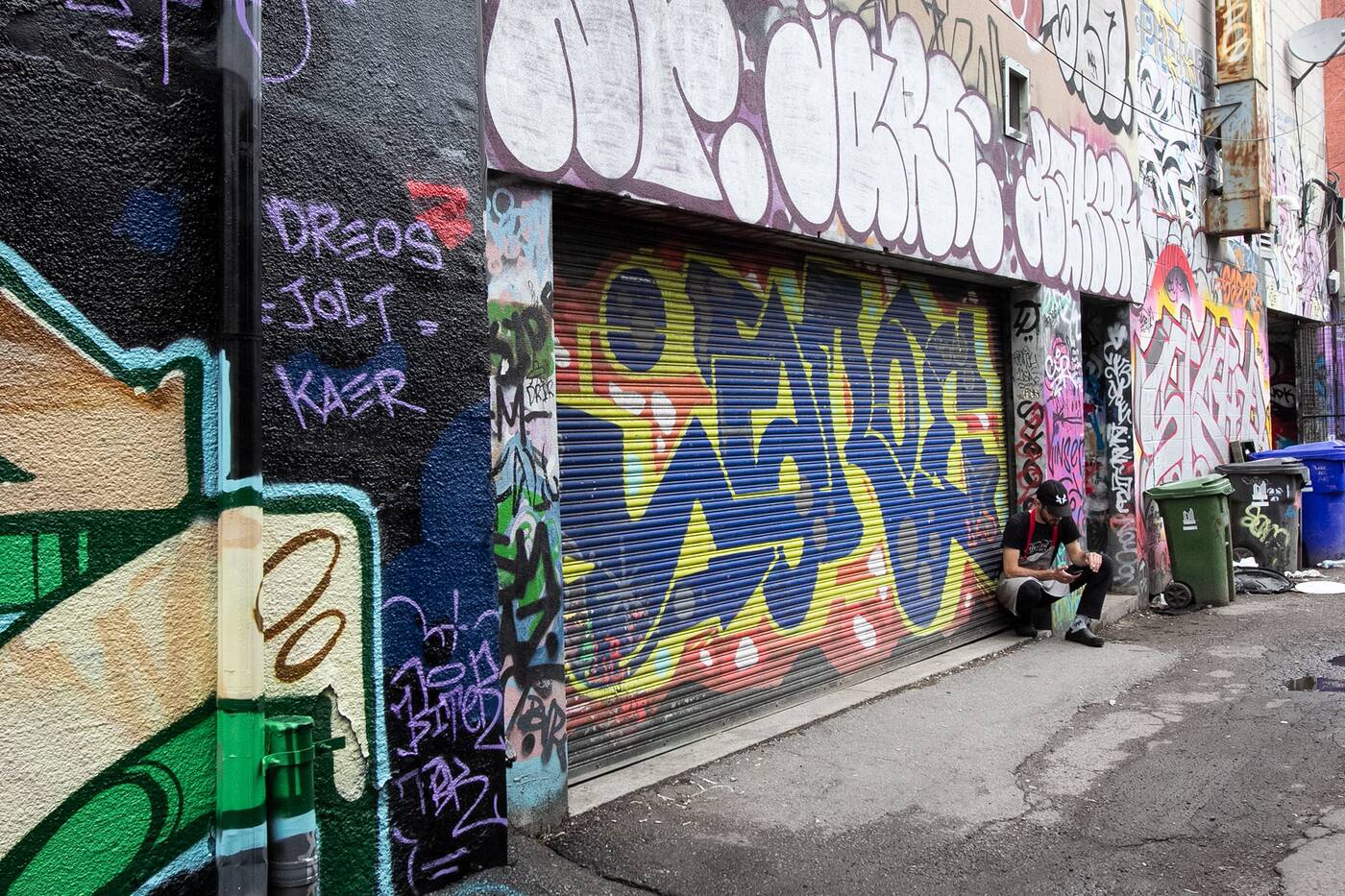 The Eaton Centre in Toronto just got a colourful makeover

The ROM is finally reopening in Toronto

AGO is reopening in Toronto with a blockbuster Andy Warhol exhibition