Where to paint Easter eggs Ukrainian style in Toronto

Where to make pysanky (Ukrainian Easter eggs) in Toronto isn't something I'd ever wondered, if only because I didn't know options existed. Then I heard about Toronto arts collective Kosa Kolektiv's affordable ($20-ish) workshops around the city. Kosa supply all the necessary materials, from the eggs to the wax, candles, kistka (pens), and carefully labeled dyes (ordered from lightest to darkest, of course). This was my second time making pysanky, not only serious art form but a meditative practice.

The group donates the proceeds of the workshops to charity, have books on hand for inspiration, and had a lot of patience for beginners (just like I had a lot of patience for attendees who could make perfect designs). Their next available sessions are April 7th & 9th at their studio near Trinity Bellwoods, using all natural dyes. As it starts to feel like spring and Easter nears, Kosa Kolektiv are a good place to start if you want to connect to Eastern European culture in Toronto - and not just when it comes to pysanka. They were kind enough to answer some of my questions about their work. 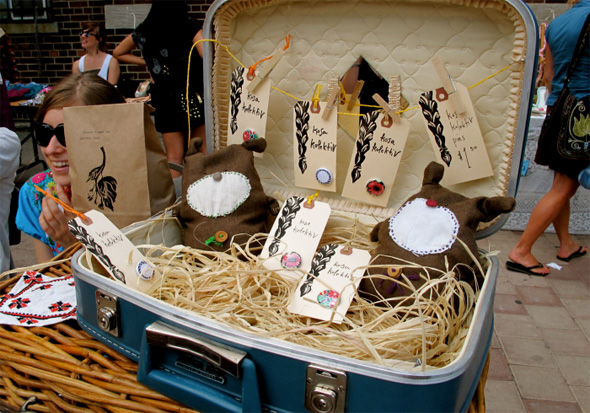 Who is Kosa Kolektiv?

Kosa Kolektiv is a folk art collective based in Toronto that aims to revitalize folk art in an urban context. We explore our folk roots in a variety of ways including practicing traditional crafts (pysanka writing, embroidery, painting, paper cutting, weaving, etc.), singing and learning folk music, cooking and preserving traditional homegrown foods, cultivating gardens and creating beautiful spaces, and putting on a variety of workshops and "happenings" to share these experiences with the community.

Our mandate is to build community through cultural practices that are simple, beautiful, and meaningful, but are becoming fewer and far between. We respect the pioneering spirit and grounded knowledge of our ancestors, and don't want to see that knowledge lost under the pressures of the fast pace of life today. What we're most interested in is bringing people together to share in the beauty of age old traditions and pastimes. Music plays a big part in our lives and most of the events we put on.

Kosa is officially composed of Bozena Hrycyna, Marichka Galadza, Olenka Kleban, Alex Baczynskyj, Stephanie Turenko, and Oksana Hawrylak. We all bring something different and unique to the table from printmaking, to sculpture to embroidery, theatre, vocals and writing...but the things we all share are a common Ukrainian heritage and a deep appreciation for a folk culture we know we've got to hold on to.

There are too many inspirations to count ! On a more general level our workshops, crafts,events and even singing repertoire is driven by the seasons. Slavic and many other cultures of the world have so many celebrations dotted all along the calendar year that there is hardly a month that goes by without us getting together to celebrate something. From St. Andrews eve in early December - a night of matchmaking and fortune telling - to Kupala on the summer solstice - a time to bask in natures fertility and celebrate youth and freedom, there are many beautiful folk traditions that follow the seasonal cycle.

We're also inspired by good story-telling. By myths and characters... even in a downtown Toronto / modern setting, there's still room for magic, and I think that possibility is what keeps us doing what we do. Every year our Kupala celebration is nothing short of magic - jumping over a bonfire in pairs, walking in a forest by candlelight, making wreaths and throwing them into the water for potential lovers to catch - these are the ceremonies that our ancestors practiced from year to year and there is something very special and awe inspiring about keeping that continuity going for thousands of years.

In a more specific sense, there are artists and musicians that inspire what we do and provide a soundtrack to our lives if you will. Dakha Brakha, Zozulka trio from NYC, Bozhychi, Hulay Horod, Lemon Bucket Orkestra are a couple of musical groups that capture a good mix of old and new world. In terms of art Maria Prymachenko, Yuri Rafaliuk, Naomi Uman, the list goes on, but those are the ones that have personally touched and amazed us recently. 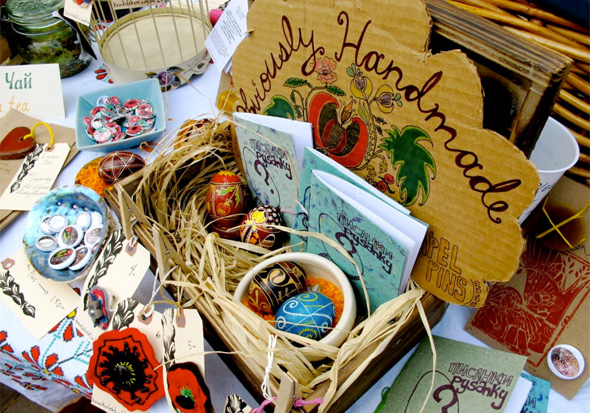 How did you get started?

In 2010, we found ourselves reconnecting and meeting a group of artists living in Toronto that shared a common interest in Eastern European folk culture. Many of us had Ukrainian roots and were fascinated by them, but somehow didn't fit into the rigid cultural institutions that we had grown up in. Little did we know - at the time - that we were all on a quest for cultural reclamation (seeking out lost and forgotten songs, learning traditional forms of Slavic singing, exploring their ritual and sacred importance, reviving cultural crafts we had lost touch with). Once we realized our common interests, it only felt natural to work together on our ideas and future projects.

Soon after, in collaboration with musicians (now members of Lemon Bucket Orkestra) and artists (now members of Kosa Kolektiv) we started a project called the Organic streetscape project that culminated in an art show at Snowball gallery, then in Parkdale in September of 2010. The project explored what it meant to be Ukrainian from a diaspora and naturalized perspective. We've been creating, collaborating, celebrating and re-defining ever since.

What are the main types of events you're involved with?

Sometime it feels like there is no limit to the type of events that we are involved in. We've organized many craft workshops (pysanky: Ukrainain easter eggs, didukhy: wheat sheaf decorations that have been recently popularized by Ikea (sigh), and mask-making), collaborated with various Canadian and international artists on set-design, promotions and connecting music with open minded people.

Our current priorities as an organization are to continue the work we are doing, keep the momentum going and to expand our activities and collaborations, and it would be nice to eventually get paid for our efforts - just sayin'! 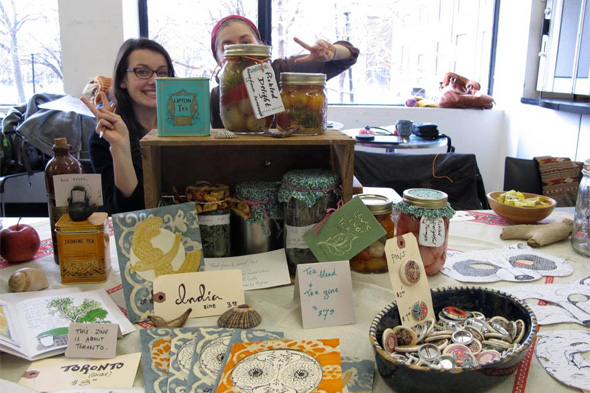 Is a lot of your work for charity?

It is important for us to help out whenever we can and that is why we've been organizing the pysanka workshops for the past four years. The pysanka workshops were historically a fundraiser for the Pysanka Orphanage in Ukraine, although this year we decided to spread the love to another organization in need - Dzherelo centres for people living with disabilities in Lviv.

Most of us have had direct experience volunteering at camps for orphaned children in Ukraine with "Help Us Help the Children", a project of the Children of Chornobyl Fund and have been very touched by those experiences and are very aware of the need for funding there, and for other humanitarian projects in Ukraine. This year, we donated around 10% of our yearly caroling campaign to aid the efforts of the EuroMaidan movement, in Kyiv, Ukraine.

Euromaidan hit home for us because many of us have visited and lived in Ukraine throughout our lives and experienced the corruption, injustices and journalistic repression in that country firsthand. We felt that as young Canadian-Ukrainians living in a relatively free and democratic society, it was our duty to help our brothers and sisters in Ukraine. We are generally not a political organization in any way, but this movement was exceptional.

Overall, we are a completely volunteer run organization. We are a not for profit that strives to make workshops affordable and accessible. We are also open and inclusive to anyone who takes an interest in what we do, and all our activities are conducted in English or at the very least fully bilingual, so no one is left out.

Where do you commonly host events?

We very often host events at St. Vladimir Institute at Spadina & Harbord Ave, because the space is great, easily accessible by public transit, and very open and receptive to our activities. St. Vlad's, as we call it, was a cultural centre and residence built in the sixties, with its hay day peeking shortly after. We are actively trying to contribute to its cultural renaissance by bringing programming that is relevant to a much broader audience.

We also have a small studio space donated to us by St. Nicholas Ukrainian Catholic Church, at 4 Bellwoods Ave. and often hold events in Trinity Bellwoods Park when the weather cooperates. We venture out of the city to do workshops too, and have been very graciously received by the grassroots crafting community in Hamilton.

Where can people connect to Eastern European or folk art communities in Toronto?

Kosa is a good place to start. We don't say that because we think we're the best (although we do think we're quite nice), but because we are connected to many different outlets in the Eastern European community through our members diverse interests.

The best way to stay connected is by joining our Facebook page or website newsletter. We often post about happenings in Toronto, visiting artists, concerts or other community events. There are so many different outlets for different interests, but to name a few - for people interested in Eastern Europe in a more intellectual way The Centre for European, Russian and Eurasian studies at U of T does a lot of great free lectures, and St. Vlad's hosts speakers and events as well.

The Shevchenko Museum on Bloor at Dundas West station has some unique artifacts. As for folk art communities in Toronto - Fedora Upside Down, Uma Nota, Pedestrian Sundays in Kensington, The Diasporic Genius Project, Funkabelly, Ashkenaz Foundation, Small World Music Festival and many other such groups are doing folk culture from all corners of the globe, and we've had the pleasure of crossing paths with all of them.

On Easter Sunday (April 20th) we will be hosting "Spring Revels in the Park" starting at 4pm in Trinity Bellwoods Park. We and Lemon Bucket Orkestra will be leading people in simple folk dances and songs and games. It's an ancient Ukrainian tradition called "Hailky" and we started to revive this last year, with our first Hailky in Trinity Bellwoods Park, and it was really beautiful and fun!

Kosa Kolektiv's ARTiculations pysanka workshop is now sold out, but you can still register for their April 7th and 9th classes using natural dyes at Kosa Studio (4 Bellwoods Ave). You can also find them at St. Nicholas Church's Easter bazaar on Sunday, April 13th and Spring Revels in the Park April 20th at Trinity Bellwoods. Watch their calendar for more.

Lead photo by Sue Nichols, other photos from kosakolektiv.com