Where to get a portrait of your pet done in Toronto

When I arrive at Tania Boterman's studio in Kensington Market, she's in the middle of a piece for her upcoming show: "One Bird, So Many Feathers." It's a series of pen and ink drawings centred around these twisted, feathered hearts. They're starkly beautiful, with just the right amount of creepy to keep them interesting and just enough colour to make them standout. 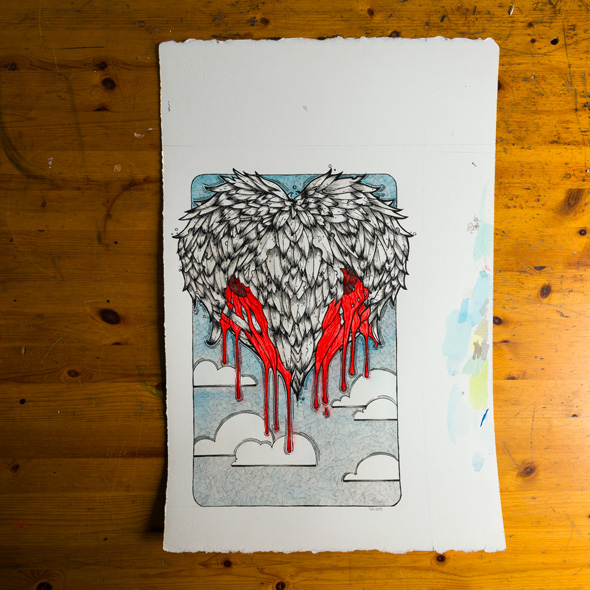 She's being kicked out of her studio at the end of the month, when she'll be moving herself and her pet cat into a new apartment/studio out towards the Junction. On top of all that she's also had to put up with pestering emails and text messages from me for the past couple of weeks about something completely unrelated to any of this. Tania Boterman also does portrait commissions — of people's pets. Dogs mostly, but she says any cute face will do. It's a cottage industry she fell into by accident, but since she started she's done well over 100 on word of mouth alone and with Woofstock coming up this weekend, no doubt there are plenty of proud pooch parents in the market to immortalize their precious pups.

I met with Tania on a dreary afternoon to talk about art and listen to sad animal stories.

What makes a good pet portrait?

The expression. If I can nail the eyes — that's what I worry the most about — the rest of it will kind of fall into place. So I look for a cute little expression, because you know I'd still like it to be a piece of artwork I don't want it to be like Robert Bateman. 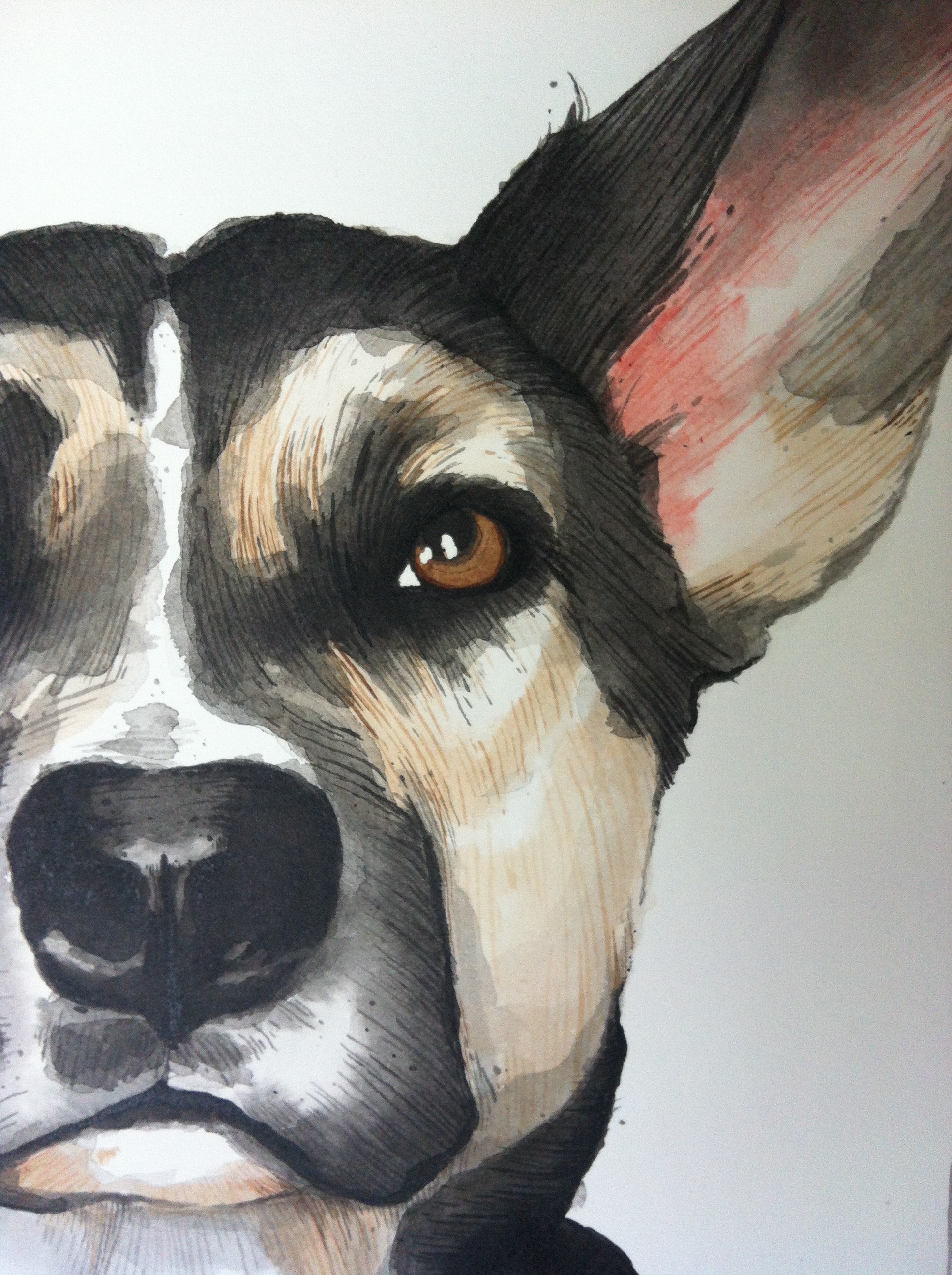 Which is your favourite?

This one for sure [Hank, below]. Because of it's size — it's big. But also, I generally work with tons of black and there's not quite as much black as usual. Also, this is one of the first ones I did in pen and ink...I used to do strictly oils and acrylics and now I don't use any of it at all, and this is one of the ones that made me stop, so it kind of changed everything.

Do you do exclusively dogs? 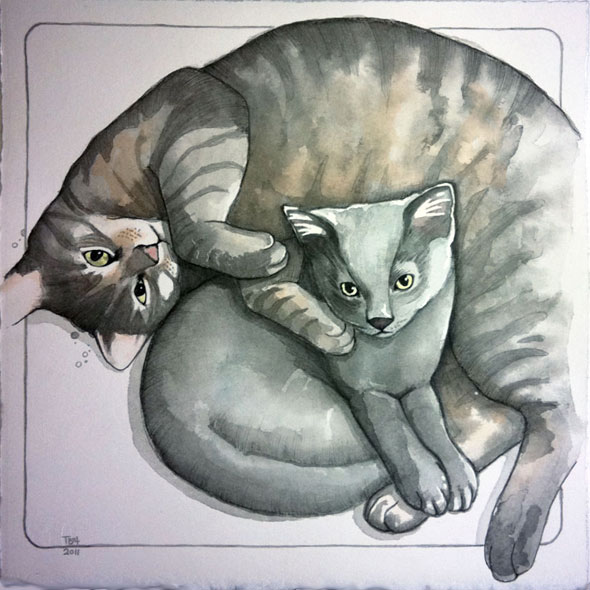 I've done a few kids, but there's surprisingly not as much of a market for it (laughs).

I don't know, I just sort of went nuts drawing animals, I've been doing it for 10 years now. It started with drawing these polar bears fighting and people really liked them, so then I did a whole bunch more and that just kind of led to flamingos and continued from there.

How is doing a commission different from your own work?

They're two different things. I find commissions far more stressful, but I usually have more of an idea when I do a commission. Like I go into it with absolute knowledge of what I need to produce, whereas in my own work, it involves a lot more experimentation and all sorts of ideas come through.

And there are expectations with commissions, which I worry about a little bit, but when someone is hiring me I assume they're hiring me because they like what I do and they're expecting something similar to things I've already done. Like, now I'm over feeling uncomfortable about it. It used to be more of an issue.

How many commissions have you done?

Maybe like, 100 or so? There's a lot of them out there, and it's kind of surprising. I'll run into people and after a minute or so, it will occur to me that I've painted their dog — or cat. 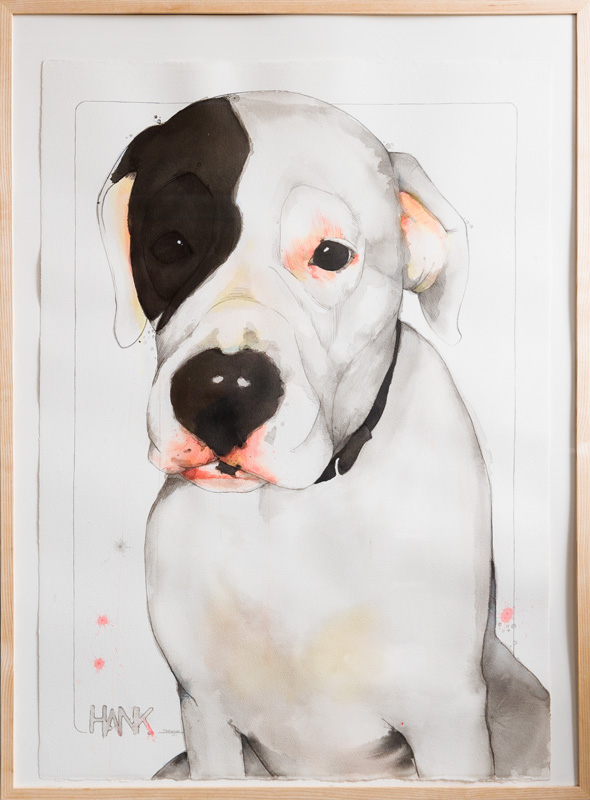 Are they generally for living animals?

This is a dead one [above]. Yeah, it was a wedding gift originally, but you know what? I think this is the anniversary of him dying, which is so weird. When I borrowed it for this I mentioned that it would be featured in an article and they were so happy because they said we were coming up on the anniversary of his death.

But yeah, often people will hire me for animals that are about to pass away — it's really weird — and then people will get super emotional...they cry...it can be very intense.

So I Imagine you get a lot of pet stories

Oh yeah, tons. One of my favourites is one of the more heartbreaking ones. This guy had a shop out of the Danforth and his dog is this beautiful yellow lab who was about to pass away and you could really tell. So I had to come in and take pictures and he was so sweet with it, lifting him up onto the couch and we had to kind of make the dog look not as sick as he was. You could tell he was heartbroken about what was going to happen next, that he really wanted to memorialize. You know, you can't help but get super-duper sad about that.

Are you an animal lover yourself?

I am! I have a cat and when I have some time I want to do her portrait, but I'm not like, an activist or anything

How long does a piece take you?

It depends, a couple of days. Most people are cool to wait, but this one guy explained to me...you know I asked him when he wanted me to have it done, and he said: "well, you know what it's like when you really want something?" So yeah, as soon as possible.

What is the price range?

The opening for Tania Boterman's One Bird, So Many Feathers is June 6, 7-10pm at AWOL Gallery and runs until June 16th.

All photos by Michael Chrisman except #3 and #4, provided by the artist