It was only this past June that I wrote about Rajiv Surendra's work as a chalk artist in Toronto. Since that time, business has boomed and he's been busy doing larger, indoor chalk boards for restaurants like John & Son's Oyster House and entire walls in offices spaces including one in the headquarters of Kraft Foods Canada (seen above). I caught up with Surenda over the holidays to find out what's up with all the demand for his work.

Why do you think there's so much demand in Toronto for chalk artistry right now?

Chalk walls seem to be a fresh new way of putting up some art in a working environment that doesn't feel stuffy or elitist; it's a really fun medium. We're all familiar with chalk and chalkboards from having to sit in front of them for our entire adolescent lives at school; so chalk art takes that seemingly mundane medium and elevates it to a much higher level.

It's why I solely work with white chalk on these boards; it's black and white as it appears in nature - black slate boards, and soft, white sedimentary limestone. When clients ask for work with coloured chalk, insisting that certain words need to stand out I try to convince them to trust me to make those words stand out by relying on layout and composition to do so, still using white chalk.

What's the difference between chalking a board vs. an entire wall?

A board usually isn't much larger than the breadth of my arms, but a whole wall involves quite a bit of physical labour, moving ladders around constantly just to lay down a few basic lines. The wall work is often intended to stay up permanently, so I focus on incorporating quite a bit of intricate detail. 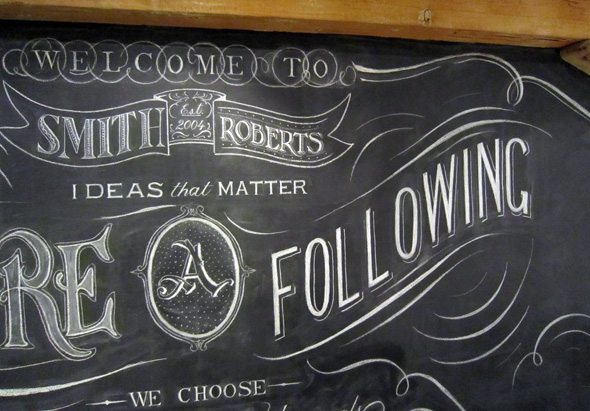 Who was your first wall client?

My first office wall was for Smith Roberts, a communications agency with an office in the Distillery district.

How long does the typical wall take?

A whole wall usually takes a couple of days to complete. The wall I did for the headquarters of Kraft Foods Canada, which was 25feet wide and 9 feet high, took 7 days, working an average of 12 hours a day.

How many walls have you done so far?

I've done about half a dozen large walls so far...the trend is catching on in restaurants too. I'm starting to incorporate other elements to heighten the standards for chalk work. In the new oyster bar that opened up on Yonge Street, John & Sons, I used gold leaf to create simple borders around all the chalk walls, which framed the chalk work beautifully. 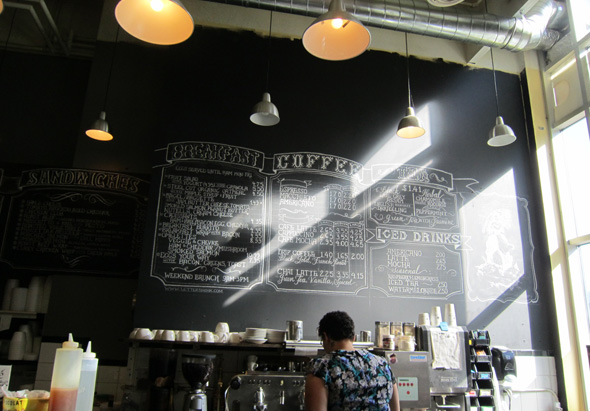 Who are some of your other wall clients? 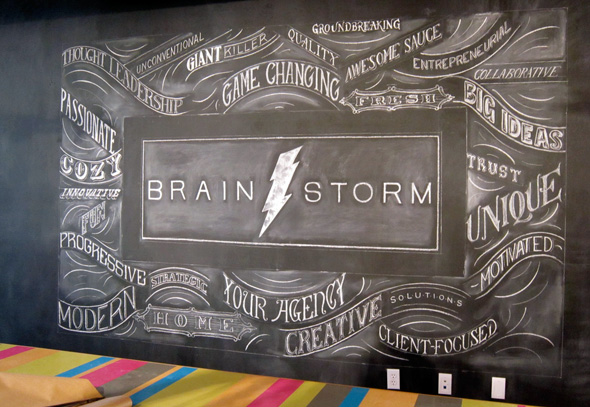 What does a company need to do to maintain their walls and prevent them from getting damaged?

I've varnished a couple of walls, which protects them, but I really don't like doing this. There's something about the ephemeral quality of my work that makes it quite special. People are pretty good about respecting their working environment, and when they know that they have to be careful around these 'chalk walls' , they're surprisingly good at doing so. Some places have opted to paint walls that are not in high-traffic areas, behind the reception desk for example.

Are you still doing smaller boards?

Yup! I still try to do all the requests that come my way; sandwich boards, wedding signs, menus. I am very grateful to the cafe and restaurant owners that helped me to get my business off the ground, and keeping that in mind, no board is too small for my little white sticks of chalk. 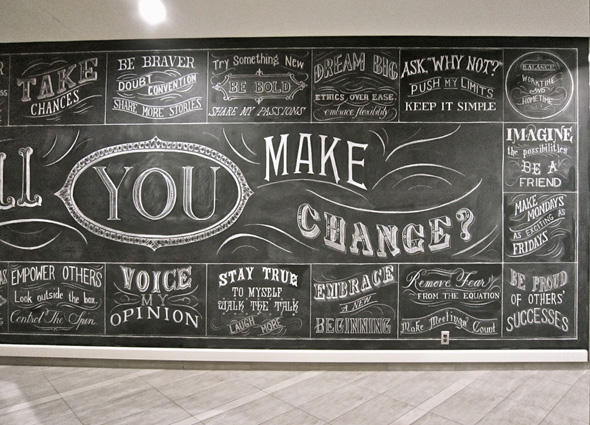