The allure of biking across Toronto to visit a new gallery is quickly fading now that the evenings are getting chillier, so for the latest incarnation of the newly-resurrected Art Agenda series, I'll focus on how to construct a well-rounded gallery crawl within a five block radius.

It's easy to pull this off in Parkdale, as the eclectic neighbourhood's artistic community continues to thrive in spaces like Neubacher Shor Contemporary and the Baitshop. And as Queen Street gears up for this week's Queen West Art Crawl (September 14-16), now's a great time to catch a few of some major galleries' current shows before the mob hits the strip.

General Hardware Contemporary (1520 Queen St. W.)
Artistic partners since 1999, Canadian artists John Armstrong and Paul Collins will display their recent works in a show that opened yesterday. Somehow, despite Collins living and working in Paris and Armstrong in Toronto, the duo has been able to create a massive body of work together, including photographs, videos, performances and paintings.

"Corner" definitely looks like the result of a collaboration between two parties. Here, painted neon lines are overlaid over architectural photography in a manner that almost completely obscures the image below. After years of experimenting with a variety of media, the "Corner" series seems to embody the pair's entire artistic relationship. I was able to view a small preview of the work during General Hardware's recent summer group show, and the conflict between the two discordant elements was both frustrating and incredibly compelling. It really shouldn't work, but the results are nonetheless beautiful.

On now to October 13. Gallery hours are Wednesday to Saturday 12-6 pm, and by appointment. 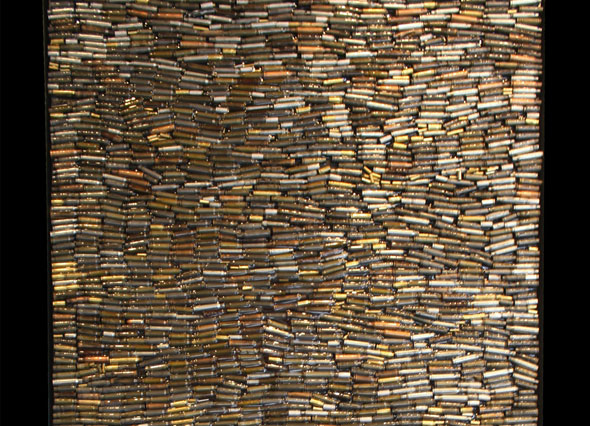 Goodfellas Gallery (1266 Queen St. W.)
As a response to the wave of gun violence that plagued the city this summer, Tyler Tilley, Maddie-Jo Tilley and Robert Watson of the Next Level Art Collective have created works entitled "1 Live Round" as part of their "3 Deep Breaths" group exhibition at Goodfellas Gallery.

Featuring large-scale pieces composed of found and foraged shell casings and bullets, each work is a literal representation of the results of gun crimes. And as a further twist, each piece features one live round of ammunition embedded within it. The concept of "1 Live Round" is certainly interesting, though I found the execution a little simplistic. One piece featured the casings arranged into a rudimentary heart shape, despite being far more effective and less cloying when it was simply piled onto the canvas as with some of others. But aside from one artistic choice, the exhibit is both effective and affecting, and its goal of continuing to further the dialogue surrounding the current culture of violence is admirable.

Goodfellas Gallery is also donating a percentage of sales from the art to The Vision of TYD, a children's charity which devotes itself to building safe and secure communities for Toronto youth.

Gallerywest (1172 Queen St. W.)
While not technically in Parkdale anymore (they moved east of Dufferin earlier this year), Gallerywest takes pride in its eclectic programming, and September's solo exhibit of Regina-based artist Gary Varro is no exception. Entitled "Chicken Inn," the series of photographs finds Varro alone in a seedy motel room, tarred and feathered, and performing banal human functions, when not seemingly contemplating suicide. Alternately comical, bizarre, unsettling, and slightly depressing, Varro's images reveal the inherent absurdity of daily life. And if you're at all confused about the chicken costume, the gallery's back room walls feature a lengthy printed treatise on the social and historical significance of the much-maligned chickens, including citations and references.