Never write about happy endings when it comes to public art because context — that all important but ever-changing element — determines everything. This is a lesson worthy of a first year undergraduate, but it bears repeating on account of my own naivetÃ© and, more importantly, because Richard Serra's Shift — one of the GTA's best claims to the internationally acclaimed artist's legacy — is once again in danger. While his second best known Toronto-area installation (behind Tilted Spheres, of course) isn't about to meet the wrecking ball, things aren't looking so rosy for concrete art up in King City.

Quick background for those who don't like hyperlinks: Shift is one of Serra's earliest site-specific installations. Commissioned in 1970 by the now elusive art collector Roger Davidson, the work sits in an anonymous field planted with corn and soy about 40 kilometres north of Toronto. Davidson, who commissioned the work, sold the land on which the installation sits in the 1980s to Hickory Hill Investments, a development company whose designs on the land have finally come to fruition.

Back in 2009, it seemed that Shift had dodged a bullet when King council voted to designate it a protected cultural landscape via the Ontario Heritage Act. Shortly thereafter, Hickory Hill announced that it would appeal the decision to the Ontario Conservation Review Board (CRB). Later in 2010, word got out that the AGO was in talks to assume ownership of the installation. 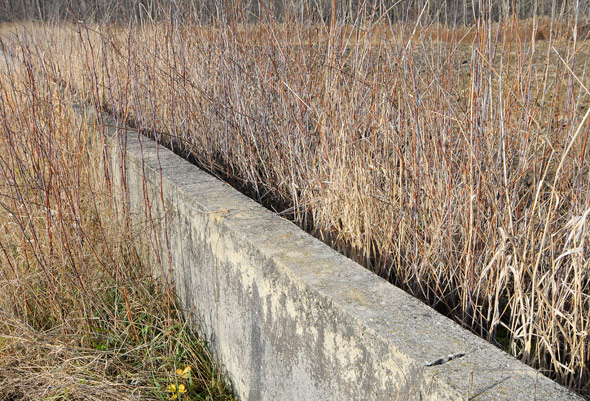 The latest, via the Globe, is that those talks broke down on account of issues related to the public accessibility of the installation. And here we arrive at the crux of the matter. Hickory Hill's argument is that it has no intention to demolish the piece, so no protection is necessary. That sounds fair — if you think of Shift as a structure, as a few rows of concrete lost among a sea of corn rows.

That's not really what it is.

Shift is actually the entire field. It's the space between concrete and corn, between art and nature. Sure, it has its boundaries — they were marked decades ago when a different kind of development divvied up the land for the purposes of farming. What Serra challenges visitors to imagine is a co-dependance that defines the visible landscape, where the sculpture itself is but one element within the larger milieu.

That's why preservation efforts are so complicated. Hickory Hill suggests that Shift is a private piece on private land, and that because it doesn't have plans to knock the work down, no one should mind if it's surrounded by one of its cookie-cutter developments.

There are, of course, other ways of looking at the situation. While Shift is already something of a hidden gem, the relative importance of the work demands that efforts are made to ensure not just its maintenance but its continued accessibility. Serra always thought of the landscape at large when he installed Shift, and it would be best if the CRB did so too as it makes its decision regarding the future of the work.