Few things conjure up nostalgia for an older, grittier Toronto as readily as the weathered acorn-stye street signs that still dot many intersections around the city. Cast out of metal, these often rusted specimens are somehow so much more appealing than their contemporary replacements, which can't help but look like shitty imitations of the real thing.

As the old signs are steadily phased out, there's been talk of making some of them available for purchase, but Toronto illustrator Dave Murray has now given us another option. The artist behind the popular neighbourhood word cloud maps, Murray painstakingly documented the old street sign font in an effort to memorialize this iconic bit of the Toronto streetscape in poster form. 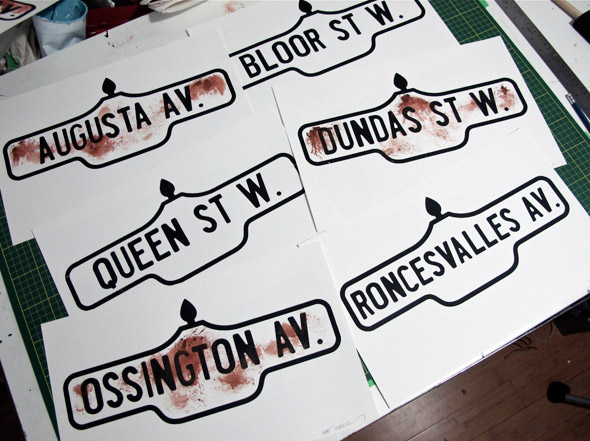 "The inspiration for the typeface primarily sprang from my love of the old-style street signs, specifically the models with the embossed type," Murray told me by email. "I obviously encounter a lot of them while making my maps, and I've come to really appreciate iconic, acorn-topped signs. While I fully understand the reasoning behind the transition — legibility, durability, cost, etc. — I believe that the new signs lack the character of the old signs."

Available in both rusted and non-rusted forms, the posters may lack the 3-D nature of the signs themselves, but the printing process — which mirrors the weathered characteristics of the originals — gives them the illusion of depth. The font's a pretty accomplished facsimile as well. As was the case with David Vereschagin's reproduction of the Toronto Subway font, Murrary took hundreds of photos for reference. 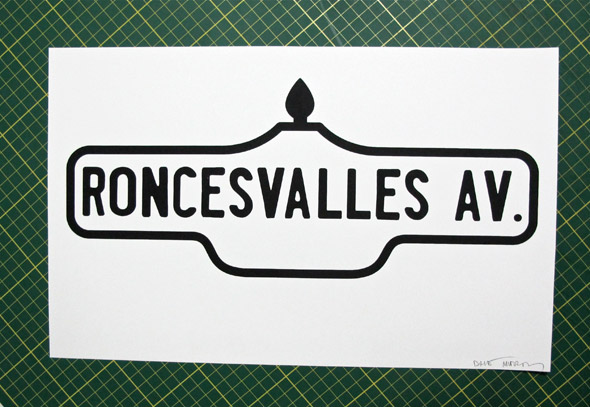 "Each letter is based off of a composite of the best examples of each letter I could find. Some of the signs really are in terrible shape, so a few of the letters were actually somewhat tricky to find," he explains. "I definitely ended up far from home to find usable reference."