Luminato 2012, the multidisciplinary festival of theatre, dance, music, film, literature, visual arts, and design has frequently been criticized for its almost overwhelming breadth. This summer, artistic director Jorn Weisbrodt seems to have embraced this fact, with events featuring combinations of artists from different nations and artistic mediums that seem to celebrate the festival's notoriously wide reach.

The festival was recently hit with massive budget cuts in the spring, but this year's lineup shows no signs of scaling back. International superstars K'NAAN, Michael Franti, Michael Ondaatje, and Phillip Glass will all be making appearances, and the majority of the festival's events remain free of charge. 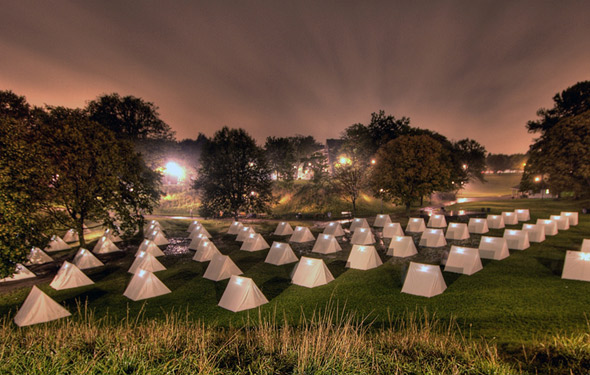 /// Re-ply \\\
Luminato artist-in-residence Dan Bergeron is the perfect face for the festival, as his C.V. somehow includes both guerilla billboard takeovers and campaign spreads for Nike and Addidas (plus a few portraits of Kanye West, Questlove and Diplo). With /// RE-PLY \\\, Bergeron will switch gears yet again to create a series of temporary sculptures out of sandwich boards along Parliament Street.

The Encampment
Held in conjunction with bi-centennial celebrations at Fort York, Thom Sokoloski and Jenny-Anne McCowan's installation of over 200 A-frame tents is the marquee public art event at this year's festival. Despite its sprawling size, the heart of the installation lies inside the tents, where artists engage in various capacities with history and impact of the War of 1812. Events are planned each evening, and prospective visitors are encouraged to bring a picnic and hang out. Sounds good.

Einstein on the Beach: An Opera in Four Acts by Robert Wilson & Philip Glass

Phillip Glass' four-hour opera has been the buzz of the festival since it was announced in March. The ambitious production has received rapturous reviews from its stagings in Europe and New York, yet astoundingly, tickets for the show are still available for the Toronto show. 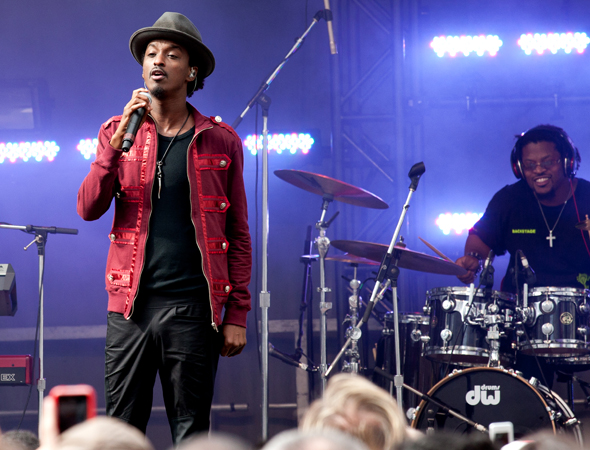 Luminato has always been notable for its fabulous concert series, and this year's lineup is no exception with an abundance of perfectly-matched double bills showcasing both international and homegrown talent.

National Bank First Night: June 8
Opening up the fest with a bang is Somali-Canadian superstar K'NAAN and Ghanaian soul/hip hop artist Kae Sun, who will play David Pecaut Square for a free performance on June 8th.

Deltron 3030 with Nomadic Massive: At the Hub, Monday, June 11
Luminato's best dance party goes down on June 11, when Nomadic Massive, a multilingual, multicultural supergroup from Montreal opens for deltron 3030, whose members include Gorillaz's Dan the Automator, rapper Del the Funky Homosapien, and DJ Kid Koala.

Calypso Rose with Ernest Ranglin: At the Hub, Saturday, June 9
Ernest Ranglin is often labelled the founder of Jamaican Ska, and his influence paved the way for Bob Marley's success abroad. He's joined by Caribbean singer Calypso Rose, who is no slouch herself with a fifty-year career and performances with Roberta Flack and Michael Jackson.

While magic has often been relegated to a pop culture punch line, Luminato has embraced the art form for years. This year's magic component is massive, including a "Masters of Magic" series alongside top acts Banachek and Juan Esteban Varela.

Banachek, a British magician famous for convincing scientists at Washington University that he was a genuine psychic at age 18, will now bring "psychokinesis, telepathy, precognition, clairvoyance, hypnotism, sÃ©ances and, perhaps most astonishing, dermaoptics--the magic of sensing without sight" to the Fleck DanceTheatre.

Chilean magician Juan Esteban Varela also runs with the dermaoptics theme, as his interactive show allows each audience member to experience his own sightless appreciation for magic. During the show, every viewer will be blindfolded and given a box of props, with which they will be directed by Juan to create their own magical illusions. 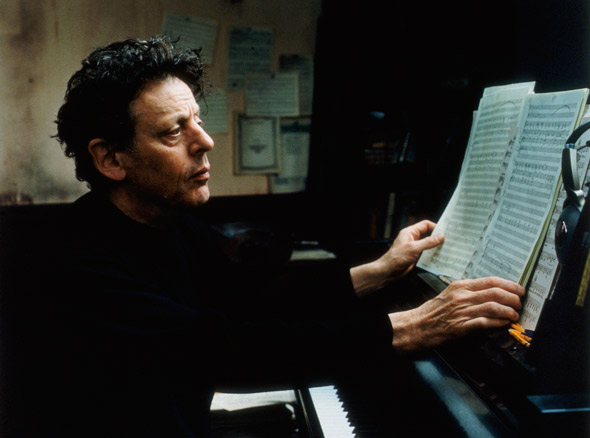 Luminato & TIFF Go to the Movies
For its partnership with the TIFF Bell Lightbox, Luminato has chosen to focus on films that document and celebrate the creative process, including two documentaries on Phillip Glass, features on theatre director Robert Wilson and surrealist filmmaker Jack Smith, and a screening of Brokeback Mountain with an introduction by author Annie Proulx. Films run from June 11-14, with tickets available on the day of screenings for $5.

After all this culture, you'll need something to eat. Accompanying the arts extravaganza is the perennial 1000 Tastes of Toronto event, in which local restaurants offer up generous sampling plates of their most popular menu items. While the "1000 tastes" may actually have closer to 40 restaurants participating, the fantastic mix of cuisine makes it worth the trip out to the Distillery District. Entry is free, but each sampling plate will cost you $5.
June 9-10, 12:00-9:00 p.m.

Images 1, 2 and 4 courtesy of Luminato