When a water main burst in front of her bakery, the city repaired it, but left a gaping hole in the pavement. In an attempt to beautify, Cora, owner of Miss Cora's Kitchen, put some spring flowers in the wounded sidewalk. "It makes people happy. They're stopping to look and take pictures," she said on Thursday.

Her quick and dirty art project is in a similar vein to the Outside the Planter Boxes Project that popped up around the city this past summer, which used unusual objects to mend neglected city tree planters.

The sidewalk garden has been there for two days and will remain until the city repairs the pavement. Or until someone has a problem with the DIY nature of the intervention (let's hope that doesn't happen). How could you dislike this particular brand of street art? 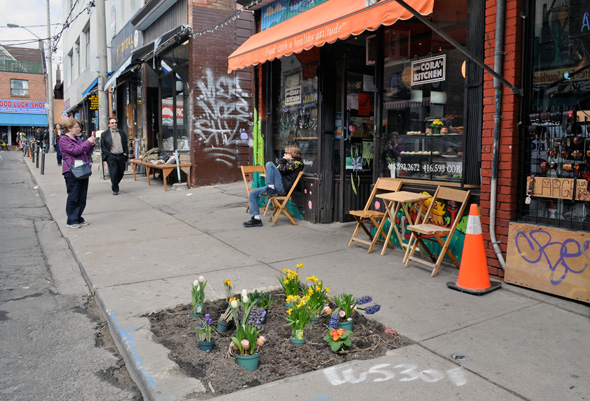 Hat tip to Jonathan Goldsbie for tweeting about this little project