When I last wrote about Toronto photographer Jeff Harris, his self-portrait-a-day project had reached its 10th year and 3,653th photograph. His work was, by a landslide, the most interesting exhibit that I saw at the Contact festival that year. At once a strong collection of individual photographs and an exploration of the degree to which the archival record of our life and its so-called real world antecedent are complicatedly intertwined, it's easy to get lost scrolling through page after page of photographs on Harris's website.

Now, at the outset of the 14th year of his project and 4,748 photographs in, Harris has received some pretty major attention in the form of a profile on Time Magazine's LightBox website. This isn't the first time that his work has been noticed by the mainstream press, but given the perseverance the artist showed in a battle with cancer and a subsequent operation that left his left leg paralyzed, it's nice to see his series receive the accolades and audience it so richly deserves. 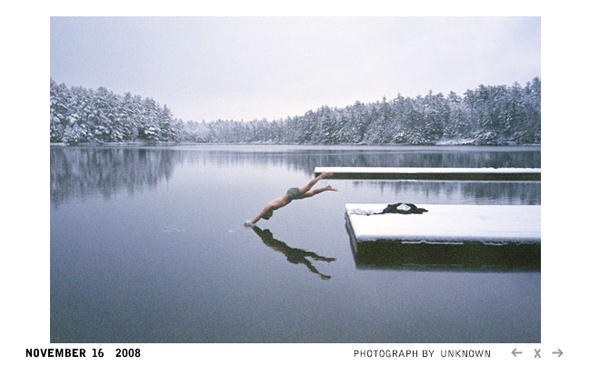 "I see no reason to not make a self-portrait each day," Harris tells Time in the profile. "I'm always around and always free. It's kind of like going to the gymâit flexes your muscles and keeps you in shape." The other thing that it does is hone the photographer's skills. Over the years Harris has become an accomplished storyteller, one whose work begets a startling range of emotions, from the saddening to the comic to the inspirational. I'd be inclined to call it Proust-by-photos, but the ever-humble artist would probably downplay such a comparison.

For those unfamiliar with his project, check out the video feature below.