With Canzine happening on Sunday, one of Toronto's nascent zine's launched its latest issue. In a park. With bands playing acoustic sets. Around a campfire.

It's called Static Zine, a self-described "Toronto arts and lifestyle zine," and it is mixing things up a bit. Last night, for instance, around the firepit in Dufferin Grove sitting on giant logs, had bands like The Wilderness of Manitoba, Parks & Rec, The Fires Of (bands, of course, all appropriately titled for the evening) serenade about 60 or so zinephiles. It was endearing, oddly soothing as a number of non-protesting individuals took up another Toronto park to celebrate arts and culture. And a campfire avec s'mores in downtown Toronto is just badass. The milieu was only interrupted when a car passed along Dufferin pumping bass-heavy rap, which is understandable. 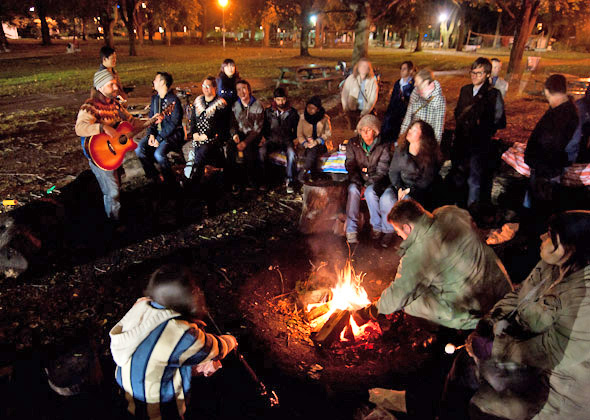 With zine culture constantly ebbing and flowing in the city, I decided it best to ask Static Zine's editor, Jessica Lewis, a bit about what's going on, why get into the zine fray and about the new issue's theme "first times in Toronto."

Why start a zine in the first place?

Why not? The three of us who run it â myself, Melody Lamb and Aviva Cohen â all come from writing or photography backgrounds, but we've mainly worked online, or at least everything has turned to online over the years. When brainstorming a project to do with friends, we considered a website, but we missed paper and being able to pass something around that you can hold in your hands, not just share a link. We do also have a website, but the zine comes first.

We liked the idea that we could do what we want with it, incorporate themes and tell stories. We wanted to work on a project that we knew we'd be able to put our passions towards. We wanted to start something people could get involved with, and we have tapped into a lot of creative resources so far in words, art, music and more. With just two issues, we already feel like for us, our zine is more of a DIY magazine and we've become some sort of community arts group. 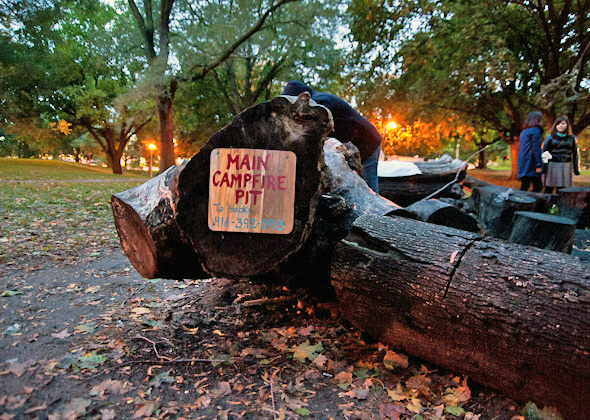 What is the inspiration behind Static Zine?

Storytelling first, cutting and pasting second. But now there's the excitement we hear back from people when they read it and the enthusiasm from all our contributors that is an affirmation. Plus, we're our own bosses and we just keep on brainstorming more ideas of what we can do with Static in the future and that keeps us going.

With Canzine happening this weekend, what's Toronto's zine culture like these days?

I don't think Static's too acquainted with the Toronto zine culture yet, as there are a lot of "people still make zines?" and "in the '90s..." conversations around us, but, in general, we find that people are really interested and excited about this stuff still.

Toronto's scene seems to be quite healthy, though. Now that we're doing this, we're finding zines and independent art everywhere. There are Spontaneous Combustion, Offerings and Off the Map, which are all other magazines in a similar realm as Static. But there are people all over still making zines and you'll see that at Canzine. Broken Pencil does a good job at getting zines out to the public here. We hope more people will be encouraged to get into zines, especially once they see what the festival is like. This will be the first time we're tabling, so we're really looking forward to getting in the thick of it, meeting other zinesters and talking to them about what they do. We went to a zine workshop put on by Broken Pencil and visited Zine Dream a couple months ago, and both times, we just spent the entire time with our jaws dropped at how talented people in this city are. 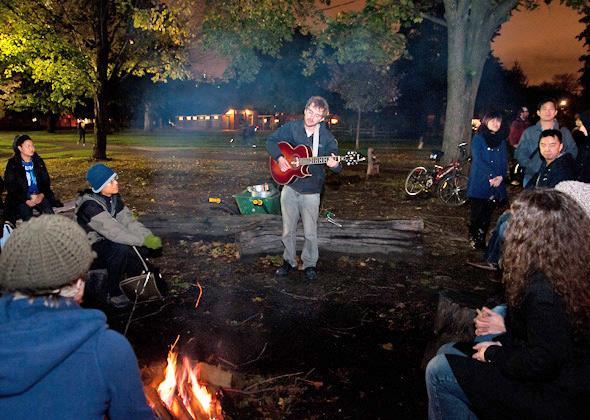 The theme of the new issue is "First times in Toronto." So, what was your first time in Toronto like? I'll leave this purposely ambiguous.

Well, besides coming to Toronto as a kid to see concerts or plays with my parents, my first real, stay-put time was when I moved here in 2006 from Buffalo to go to Ryerson for journalism. I moved into residence being so happy to be in a cool, big city that is full of writing, music and art and I never looked back. I even liked my residence room, that's how great of a first time it was for me. Toronto is home.

What question should I have asked, but didn't? Subsequently, what's the answer to that question?

I wouldn't say you had to ask anything else. Maybe about who is involved, what we write about or what we plan on doing next. And to that, in short, for this issue there were almost 30 people involved. We're all storytellers whether we're writers, illustrators, photographers, musicians, designers, students, developers, etc. We love and live Toronto and want to tell stories of it and for it, but we're also into different kinds of themes as launching pads for those stories as well as the different methods within that. We're planning our third issue to come out in February or March; we'll throw a big bash, maybe start our own zine fair, and choose a new theme to go with.