At the end of an anguished, years-long construction process, St. Clair West's streetcar project was finally completed at the end of last year with a discrete, publicity-free coda - the installation of artworks on the streetcar shelters along the line. You probably didn't read much about it, while locals were often surprised to look up while waiting at their stop and notice that something new had been quietly added to the metal, wood and glass transit shelters that, along with the resumption of streetcar service, had taken so long to arrive.

Rina Greer is a public art consultant who has worked with the TTC for years, on the Sheppard subway and Spadina streetcar lines and most recently on St. Clair, overseeing a jury and selection process that produced 24 installations from Yonge to Gunn's Loop, in a variety of materials, from digital transparencies sandwiched between glass, to printed panels, perforated metal and colourful plastics.

According to Greer, the first four artworks were installed in October, while the remaining 20 went up in November, two and a half years after the first call for artists' submissions went out. The public art project, however, had been in place since at least 2004, when Brook McIlroy Inc., the designers of the St. Clair line's shelters, platforms, light standards and power line supports, published their plans for the project. 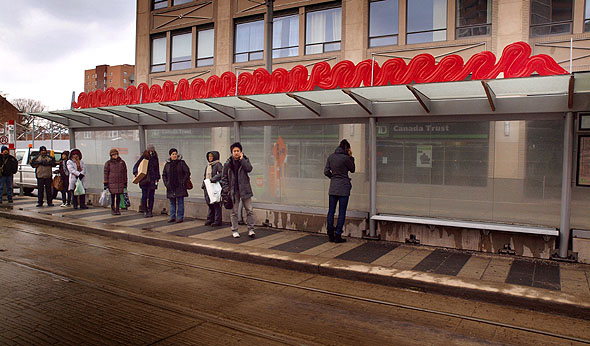 "The goal with public art is to stop the moment," Greer tells me, as she explains her priorities on projects like Spadina and St. Clair. "To get the public to ignore the traffic and all the other sensory experience in the area at the moment and to have an experience that brings you outside the ordinary." 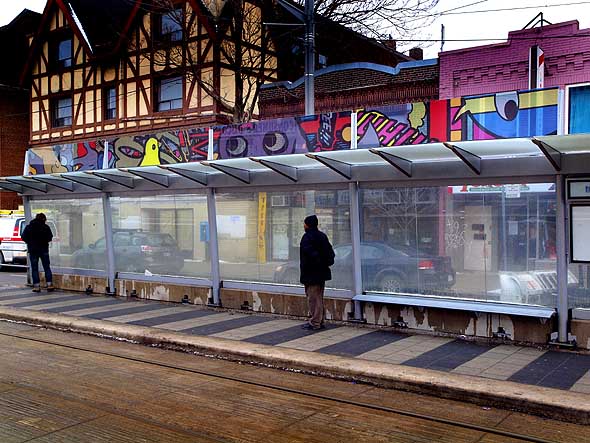 It's worth a slow trip along St. Clair to take in the two dozen artworks on display. Reactions will always be subjective, of course, but there are some clear standouts, like Mark Laliberte's pop art comic book panels at Oakwood, and Kristan Horton's vivid squiggle of bright red cake icing crowning the shelter at Bathurst. Greer praises the work she sees changing according to the weather and the light, like Mimi Gellman's frieze of fish at Keele, rendered in black, blues and silver. 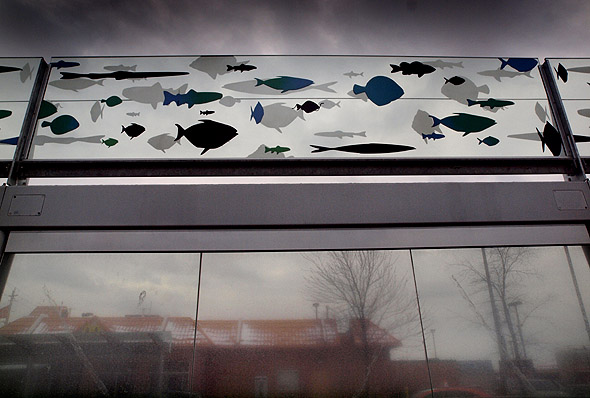 "In gray weather they become almost black and white, almost silhouetted, very stark. But when the sunlight bounces off them all the blues and greens and metallics come alive - it depends on how the light hits them."

Greer began the project with co-consultant Catherine Williams in 2005, but took over as lead when the artists had been selected, but that was after a year-long break when construction delays pushed back completion, during which they were able to get the project to expand its scope of materials and concepts. Originally, just five out of the twenty-four artworks would have departed from the original idea for the shelter art - digitally-printed transparencies sandwiched between glass, in four, ten foot-long panels on top of each shelter.

"When we came back to the project from the hiatus," Greer recalls, "I thought I know it'll be complicating my life, but the project would really benefit if we had more variety on the line." 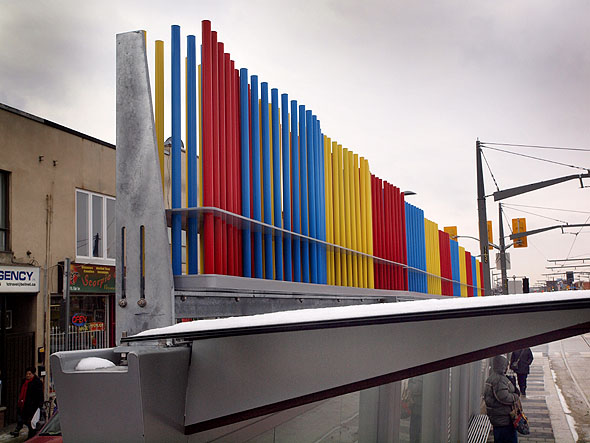 There was no overt attempt to make each artwork specific to the site where it would be placed, but there are happy accidents, like Nestor Kruger's forest of coloured rods at Laughton Road in St. Clair Gardens, in Lego-like primary colours - red, blue and yellow - that happen to echo the colours of the Colombian flag painted on the patio of the El Rancherito pupuseria across the road. 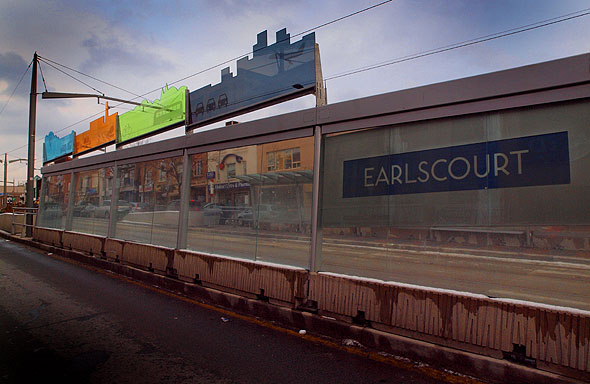 Greer won't discuss the budget for the project, but says that it came in well under the "one percent" rule adopted worldwide by the TTC and other public transit organizations for the funding of art in public transit spaces. She also won't speculate on the likelihood of St. Clair's shelter art being used as a model for further transit projects, like the multiple LRT lines proposed as part of the imperiled Transit City.

"Unlike let's say London or New York City," says Greer, "which has within their transit office a specifically dedicated staff that runs an independent public art program, TTC has always just contracted out their program. I was a contract person for 8 years when I was doing Sheppard and the Spadina LRT, but then the contract's over and I don't speak for them. I would hope it can happen - I think it's been wildly successful, creating an open air art gallery." 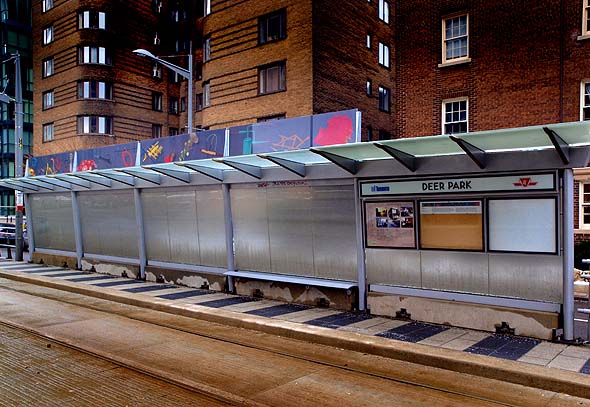