Art Agenda: Group Show at the Mercer, Harold Town at Christopher Cutts and Yu-Hang Huang at A Space

The city's galleries are starting to shake off the holiday slow down. This time around there's a look at the alien future of something old, something old returns to the present and something alien drifts through the familiar. 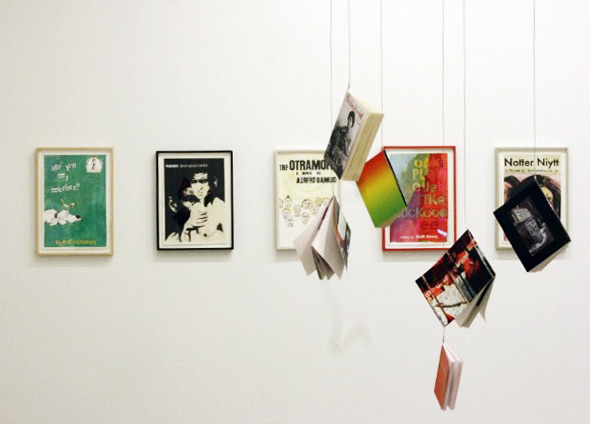 The new show at Mercer Union,which is curated by Sarah Robayo Sheridan, brings together an eclectic group of artists to mediate on the nature of books as material items and the way in which the shifts in technology and marketing are radically altering them. Kristan Horton, John Latham, Roula Partheniou, Amy Robinson, Molly Springfield, David Stein and Derek Sullivan all have pieces on display re-examining books as something of an archaic medium. Robinson's enlarged watercolor versions of stark and classic, mostly counterculture, books for the sixties and seventies and alters the text so that the title and author name become nonsensical riddles. Horton created an elaborate vitrine display about a machine that turns books on tape back into books for print. Roula makes highly detailed graphite drawings of the photocopies of page spreads. All of these strategies serve as playful meditations on the visual culture of books and how dramatically their content is altered when they shift to a different medium. 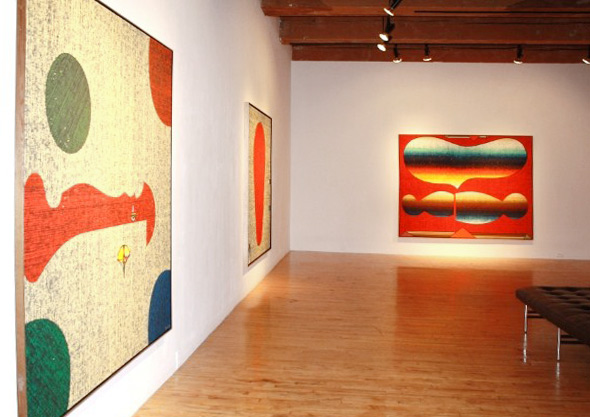 Harold Town was one of the most successful painters that Toronto has ever produced. Although a member of Painters Eleven, he was never satisfied with just doing abstract work but spent much of his career doing everything from intricate graphic design to 'pornographic' work that would raise the ire of the Vatican. Beyond his considerable draughstmanship, it was his penchant for deliberately baiting and annoying critics, other artists and the general public that got him much of his fame. 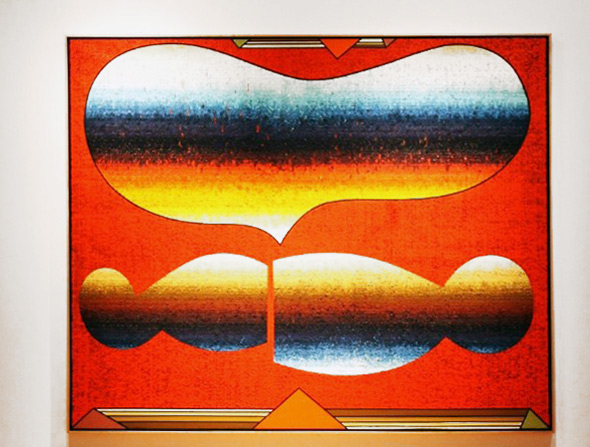 The Snap paintings on display at Christopher Cutts were done between 1972 and 1976 using a technique that Town pioneered. He set up a set of polls with holes and dowels to which he tied a string. This was then thickly coated in oil paint and Lucite before being pulled back and snapped to hit the canvas. The string would then be cranked up to the next line. Long drying times were needed for each line and he would often work on eight pieces at once which would take months to complete. They weren't well received when first shown but their eccentric quality has subsequently become appreciated. They are intricate and unique works, playing deftly with the densities of intense hues of paint and pattern which accent the surface qualities of the work, paying tribute both to Town's enthusiasm for Pop art and for the starkly different string paintings of fellow P11 member, Kazuo Nakamura.

Using performance, video and photography, Yu-Hang Huang travels through spaces in the guise of an idealized architectural symbol in order to question the nature of spatial boundaries and monuments. This can happen quite literally, as the slide show of her wandering the streets of various cities dressed in costume shows, or in a more complicated way. Her video work on display at A Space shows her playing with the tension between everyday objects as the mostly white elements in a predominately white room are softened up, collapsed, and stripped away. There's something eerie and mysterious about the video, as there is about the rest of the show. There is also a certain humour to a lot of it, particularly as she stands in a stilted, slightly uncomfortable pose in her semi-transparent mobile monument.

Oliver Husain's film and intriguing installation piece Cushy Number is on at Susan Hobbs. Over at XPace Bojana Videkanic is curating a group show of young Yugoslav artists facing the aftermath of the war there.