The Business Woman's Special (BWS) marked its one year anniversary last night at their monthly queer party at Augusta House in Kensington Market. The party is one of the now many queer events taking place outside the Church and Wellesley Village.

Leaving the village to party is not new for Toronto's queer community. However, parties like BWS, Yes Yes Y'all and Big Primpin' are creating a newer, more casual, fun-loving and inclusive queer community outside of a centralized gay scene.

There was a time when parties like BWS would have been impossible. "Prides used to come with a warning: if you leave a certain area, leave with a group. If you didn't you were in danger of being bashed," said Drew Rowsome, associate editor at Fab Magazine. In those days, a centralized gay neighborhood provided the only area of safety where one was respected,
visible and among like-minded individuals. 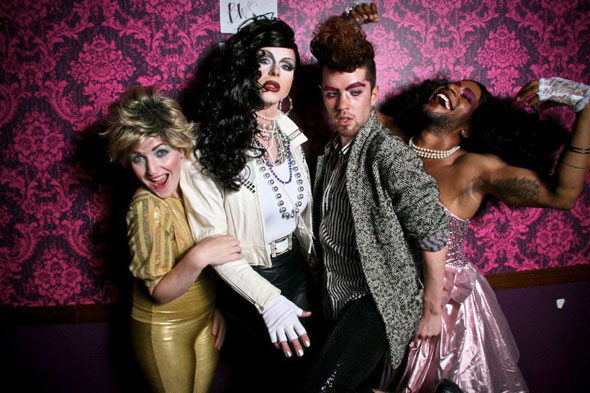 Then came the mythical "pink dollar," the economic buying power of the gay community. With it, the door slowly began to open for DJ's and promoters to take queer events outside of the village. Even bars and clubs with openly homophobic owners opened their doors to Pride circuit parties. "It was a matter of economic clout, if you could get your hands on gay dollars, you would," said Rowsome. But in order to push real acceptance and inclusion, "You always need someone to kick the door down," he said.

That someone was Will Munro. "What Will did was revolutionary," said Rowsome. Munro, an artist and party promoter, decided to take over Lee's Palace, then known as a strictly straight venue and throw a monthly queer party called Vazaleen.

It was more than a party in a straight venue. Vazaleen is still known for being in a class of its own politically, artistically and socially. Posters were hand silk-screened by Munro, performers danced on stage, there were massive projection screens, under the radar bands preformed and freaks of all nature were both welcome and encouraged.

"I feel Vazaleen had a mission to be subversive, which it succeeded at," said Frank G., part of the team behind Big Primpin' who is starting his own queer party, HER, every second Friday of the month. "I think for Will it was more than a party, it was about building community and building a safe space for people he felt didn't have that space," said Frank.

At Augusta House, Business Woman's Special is a departure from something so politically charged. "We have a sense of humor, no one takes themselves too seriously. Its named after Romi and Michelle's High School Reunion for God's sakes," says Micheal Yearxa, who runs BWS with co-promoter April Wozny. Which isn't to say that what is happening in Toronto's queer community isn't just as important.

"There are gays everywhere and they want spaces. Who wants to be corralled on to one strip?" said Illa Kavannaugh, a member of the Yes Yes Y'all crew, who throw a monthly gay hip-hop party at the Annex Wreck Room. "I like Church Street, but I don't want to have to travel to one side of the city to gain some visibility, space and look for dates," she
said. Parties like Yes Yes Y'all, BWS, Big Primpin' and bars like The Beaver and Henhouse provide just such spaces.

But perhaps more importantly, these events create a more casual, easy going vibe where everyone is welcome. "If you go to a circuit party there is a pressure to look a certain way, you have to have the right drugs, you have to be prepared for the right music; its a lot of work," said Rowsome. Those scenes are a far cry from what is happening at events outside of the village.

"Anyone who is anyone can come to our party: gay, straight, different ethnicities," said Sammy Rawal, a member of the Yes Yes Y'all crew. "Our biggest mandate has been not to pay attention to cliques or the way that people fragment off," said Rawal. That motive is also true for Yearxa and Wozny at BWS, and for Frank at HER and Big Primpin' who all aim to throw gay parties that are inclusive to any subgroup, including straight people. 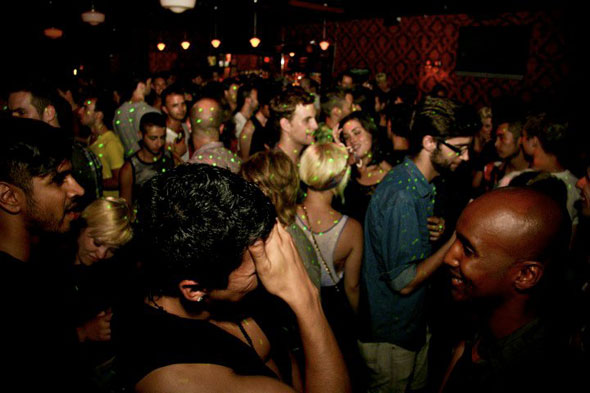 "When you come to our party, couples are grinding against the wall and you'll see two gay men, two gay girls, a straight couple, a fag and a dyke grinding; everyone is just jamming together," said Kavannaugh. At BWS the scene is similar.

"At the end of the night when there are still tracks going I will stand looking around at who is left and there are people from all pockets, cliques and subgroups," said Wozny. Its this inclusiveness (and the allure of a photo-booth with pink wall-paper) that draws long lines to
BWS, Yes Yes Y'all and drives the continuing success of Big Primpin'.

Party by party, these young promoters push the LGBT community forward by creating safe spaces under a mandate of light-hearted, positive camaraderie between subgroups, cliques, genders, ethnicities and differing sexualities. At these events diversity is not only encouraged, its celebrated. Rowsome says it best, "When everyone figures out that
its best to be flexible, that's when we'll really party. Then we'll have some fun."