Adam Matak explores the nature of viewership at Twist Gallery

The pen is mightier than... the brush? I know that isn't exactly how the expression goes, but it what was going through my mind visiting Adam Matak's show, "Acceptable Losses," at Twist Gallery. Matak's exhibition, which features candy-coloured paintings (both free-standing and on the wall) and works on paper, make one feel as though he or she has been swallowed up by a graphic novel about gallery-going. And though it's impossible to ignore such large-scale, vibrant paintings, somehow the positioning of the free-standing works "drew" me into in to his series of small, navy-blue sketches. 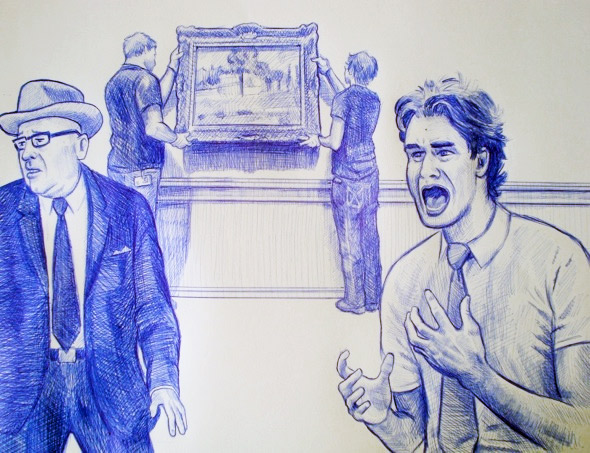 Placed on the gallery's 100 foot wall are highly detailed BIC pen drawings -- the artist notes in his materials breakdown that they are specifically made with this brand, leading me to wonder will artists start looking for NASCAR sponsorships? -- that seem to be the planning or rough sketches Matak undertakes before creating the larger works on canvas. Two peculiar drawings in the series (Study for Taken I & II) show distressed men, shouting into spaces outside of the picture plane as museum workers are removing works of art. I'm not sure if the paintings being taken are significant, but it's worth noting that "Study for Taken I" shows the little boy in Manet's "The Young Piper," and "Study for Taken II" depicts a Cezanne Landscape are being removed. 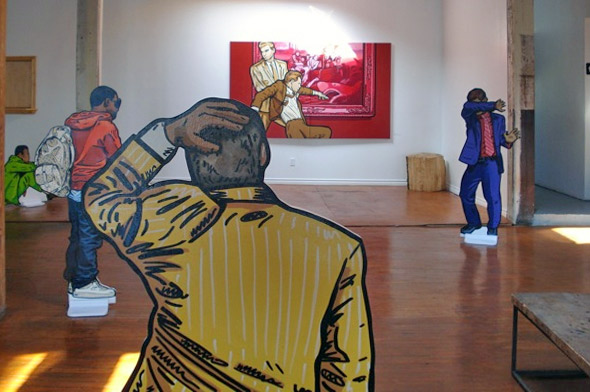 Also worthy of mention is the free standing painting/sculpture of a stoic looking man dressed in blue, placed in a corner of the gallery. This sculpture, titled "Artist (Blue Boy)," stands out from the other dozen that dot the gallery floor as the figure's wrist is slashed and a dramatically folded red satin cascades down around his feet and spills onto the floor. Strangely, this is the only free-standing figure in the space that is also looking out at the viewers. Is he the figure of the Matak himself, the bleeding wrist a metaphor for the vulnerability and potential pain caused by the (critical) gaze of the viewer? Or perhaps the statue is a Romantic figure, the blood representing the degree to which the artist suffers for his work?

Questions like these are best conceived of as entry points into Matak's work rather than opportunities to offer some final interpretation of what it all means. But, I'll say this, it's certainly a thought provoking show!