Art Agenda: Conceptual Art in Canada 1965-1980 at U of T, Group Show at XPACE and Bruce LaBruce at Art Metropole

In a variety of divergent ways, a trio of art events this week look back at the history and continuing problems of the legacy of the previous century's avant garde movements and where, if anywhere, they can go. 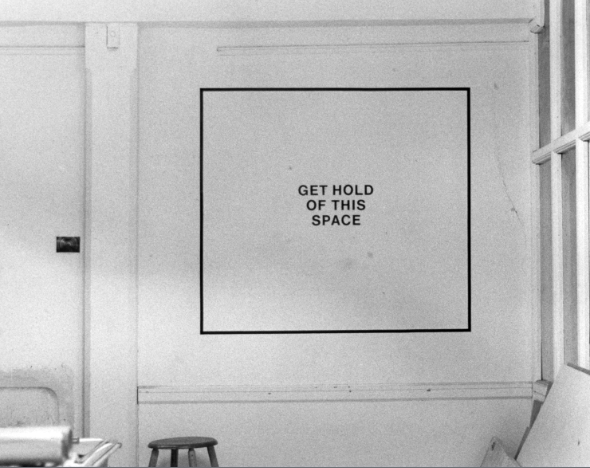 The art galleries of the University of Toronto are currently housing a look at the evolution of one of the defining movements of twentieth century art - Conceptualism. Taking a hint largely from Marcel Duchamp and certain strains of linguistic philosophy, Conceptual Art developed as an attack on the prioritizing of the visual in art, on the cult of craftsmanship, on the institution of the gallery and the notion that a work of art needed to be any more than an idea. It's a substantial exhibit, sprawling across four galleries, two on the Toronto campus with another in Mississauga and one on the campus in Scarborough.

A massive undertaking, it takes an important look at one of the crucial points in the redefinition of Canadian art. Immediately conspicuous, however, is how immensely regional the importance and significance of this shift was (and, arguably, still is). More than anything, what the exhibition makes clear is how overtly provincial and bound up with nationalism the trend actually was in this country. It proved nearly irrelevant east of Ontario, but was decisive in the development of the art scenes of the Prairies and West Coast. 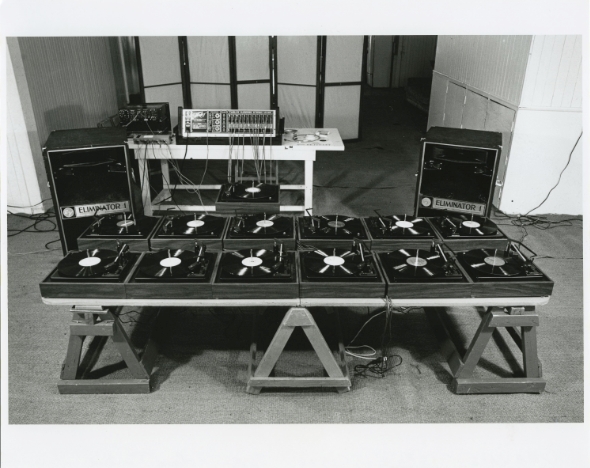 In spite of being fairly intent on removing the art object from art, Conceptual Art practice still managed to produce an enormous amount of work, largely in the form of documentation. There are many videos on display which range from the trying to the bizarre (Image Bank's 'Peanut' video is quite hilarious); there are also numerous John Cage inspired audio experiments and pieces by highly influential figures like Michael Snow and General Idea. Much of the show is stored in vitrines which are filled with the many magazines, magazine parodies and manifestos that were written by key figures, and some obscure ones, in the largely unorganized 'movement'. It's all pretty overwhelming actually... and kind of depressing. More than anything, Conceptual Art had sought to escape from, if not dismantle, the art world and abandon its history. Instead, within only a few years, it was captured, institutionalized and commodified. 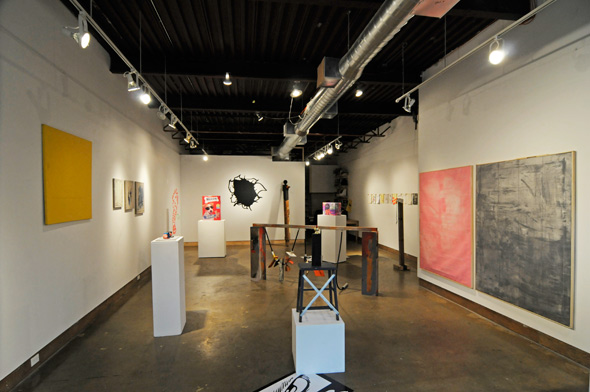 Not too far away, another exhibition was dealing with the legacy of Duchamp and the Conceptual approach to art production. More in particular, Duchamp's notorious invention of the readymade. 'Legacy' would be the key word here. Strictly speaking, the works aren't really readymades but borrow elements of Duchamp's initial gesture as well as distort or critique it. One of his chief points was that a work's context is as important as its content. Within the current practices of art galleries and art students, it's hard to imagine much that would be less radical than repeating Duchamp. And that isn't what happens. Rather, what you get is a kind of kitsch avantgardism, which is basically like a Che Guevara t-shirt or a Last Supper dinner tray. 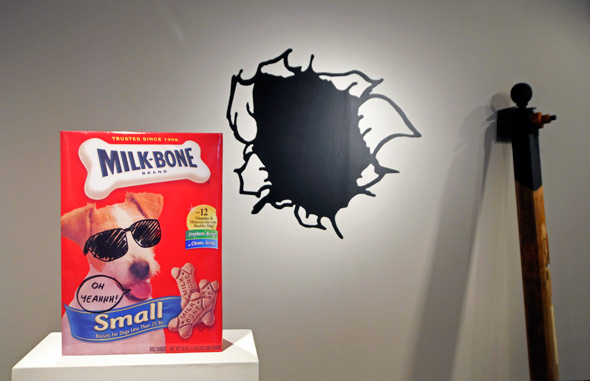 There's charm in all of that. Hugh Scott Douglas' thinly painted monochromes on linen possess a well versed material blandness and Ben Schumacher's toilet bowl cleaner, hair gel and oil on raw linen works are appropriately positioned half way between homage and parody of the man who infamously placed a toilet bowl in a gallery. Tibi Tibi Neuspiel and Sara Cwynar's inflated consumer objects (a Milk Bone box) manage to be witty and slightly disturbing thanks to their disorienting scale and intriguing graffiti. Perhaps the most startling thing in the whole show, and which could serve as an appropriate maxim for it, is the line he culls from circling letters on the drug information panel of a giant Advil box: "History is under attack because it upsets us more than the pain of new problems." 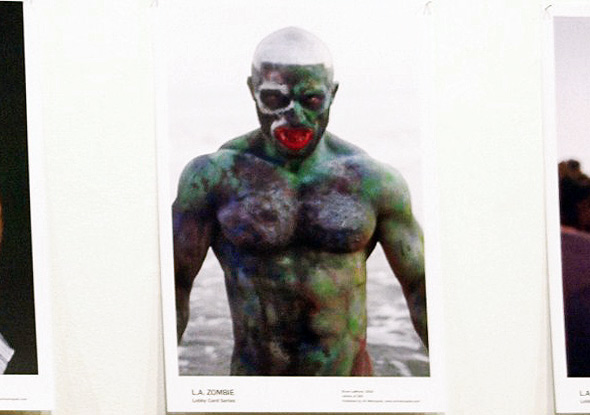 A special print edition of Bruce LaBruce's LA Zombie lobby cards are on display at Art Metropole. The controversial film director and author was present for the launch and engaged in a little talk with Gerald Hannon, once a notorious contributor to the defunct mag, "Body Politic." While this is not exactly an exhibition, it does fit in with what's been discussed above. In fact, for better or worse, LaBruce's entire body of work would be pretty unthinkable were it not for what happened in the Conceptual Art movement. His early years in zines and mail art, his appropriation of disparate genres and frequent use of a technically harsh and deliberately unpolished visual style were all a commonplace for the Conceptualists of the 60s and 70s. I've always seen LaBruce as more of a curator of the tropes of transgression than anything else. It would be nice to see him run a gallery or a festival. The thing I find about much of his work is that, although it starts with an intriguing premise, it doesn't go far enough with it. Instead, he stutters and just gets awkward. It's his Don Knotts syndrome. 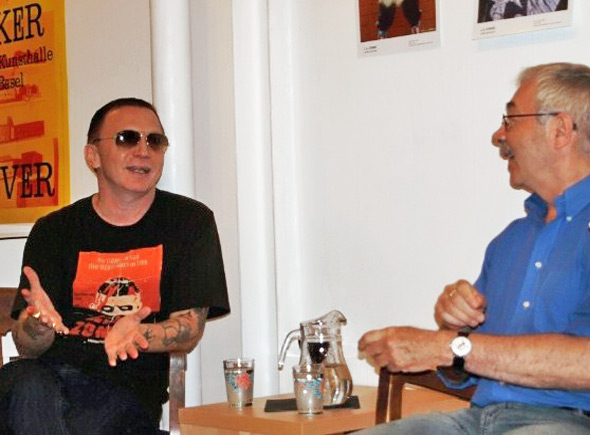 I didn't check out "LA Zombie" at TIFF, but he explained it as part remake of "Hustler White" and part homage to 50s b-movies. The lobby cards, once a popular feature in the heyday of classic Hollywood, feature the film's star, Francois Sagat, in various shades of zombie makeup, half nude or sporting a prosthetic penis. The pictures themselves were more successful than what I've seen at his previous photo shows. There was a nice purple, orange, silver and red colour scheme which was slightly subdued, and yet had an almost Technicolor air. Actually, perhaps it was the wine I'd been drinking all day, but they rather reminded me of my old "Gone With The Wind" paper dolls. But as with most of LaBruce's work, what there is of style and substance matters less than whether or not one subscribes to the situation as he describes it. That is, whether one longs for a homosexual intifada or not.

Iconic Canadian painter Christopher Pratt has a new show at Mira Godard Gallery, which may not contain a lot of surprises for anyone familiar with his work but is still filled with his unsettling subtlety and well worth checking out. A new exhibit by Ian Baxter is opening at the Corkin Gallery and there will be a series of bullet paintings by Viktor Mitik at Gallery Moos.