What do you see in the Serra?

A little while ago, I wrote a piece on Richard Serra's "Shift," a sculpture located in a field near King City. At the time, the image of the installation I embedded was a bit desaturated and washed out, all wheatish-yellow.

Being a little vain and compulsive, I tend to re-read my stuff a bit too often. So when I heard the other day that Google had updated its GTA satellite/aerial imagery to something a bit more green and summer-like, I was quick to check if the map in my previous post bore the signs of change.

It did, and much for the better. 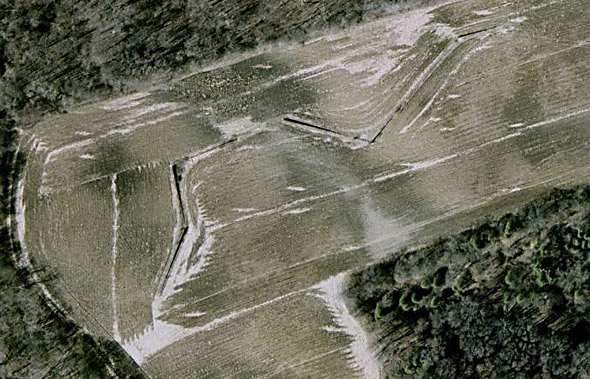 Despite a fear of mining the archives a little too quickly -- it is that time of year, isn't it? -- when I saw this, I couldn't resist.

At first anti-climactic, "Shift" actually shows quite the change. In place of a desaturated yellow, the field now appears a rich green. A seemingly minor detail, as a fan, the new capture is a big deal.

With the soy high, the sculpture now floats in a sea of edamame -- bobbing as a sort of oh-so material signifier in search of an oh-so-elusive meaning.

I know it's awfully cliche, but "Shift" looks like it wants to "connect." Those two shapes -- are they family? -- appear to be on the verge of embrace.

On the other hand, the two slabs also look like a little alligator staring down an eel (just below a green waterline). And is that a great white shark to the south?

In a sort of reversal, and in keeping with its title, "Shift" is very much a product of the viewer's imagination -- at once a concrete intrusion and that strange, immaterial thing that is the line drawn between a star and its constellation.

Perhaps two worms, one a tad shorter than the other, in pursuit of a slimy touch?

This must be a message meant for Mars.

A sister to a crop-circle?

Save me from pretension. What do you see in the Serra?