October's been a busy month for the visual arts throughout the city, headlined by the Leona Drive Project and the Toronto International Art Fair. And along with these major (although sadly short-lived) events, there's been plenty of stimulating shows at galleries across the city, many of which are still running, if only for a few more days.

Here's a roundup of the exciting events I've checked out over the last few weeks and some recommendations for upcoming shows. 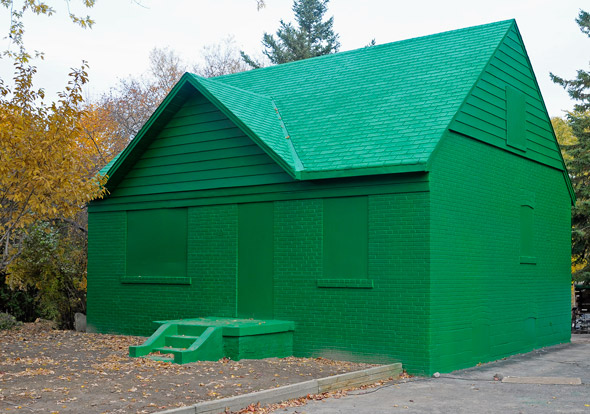 The Leona Drive Project has been getting a lot of attention, and it's well deserved. Co-curated by Janine Marchessault and Michael Prokopow, this is one of the most thoughtful and engaging exhibits I've attended in recent memory. More than that, it's unlike anything I've ever had a chance to view in person. On the surface, and in strictly visual terms, it may not be altogether that astounding. The chief material the participating artists had to work with, after all, is six vacant, formerly suburban bungalows in North York. But, when you get the chance to spend a little time walking around the extensive, site-specific installations, the degree to which the project commemorates and explores the transformation of this city (and North American cities in general) is quite profound. 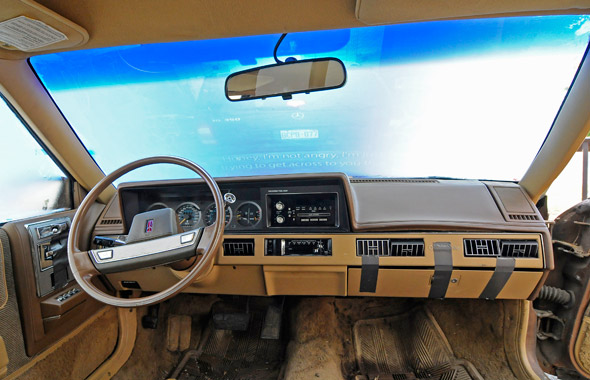 Contrary to much that I've read about it, for me the exhibition operates less as a documentation of the end of the suburbs (they've simply moved further from the core) and more as an investigation of what gets lost to the city's progressive march outward. 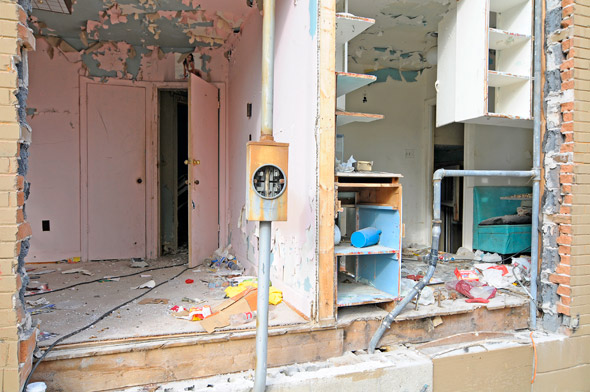 Toward that end, there's quite the range of issues covered here. From An Te Liu's giant Monopoly house -- which gestures to the home as the site of a complex interplay between economic and personal affairs -- to Angela Joose and Shana MacDonald's restoration/re-imagination of former resident Ruth Gillespie's kitchen to David Han's use of an Oldsmobile Cutlass Cruiser station wagon to underscore the vital role that the automobile played in the creation of a place like Willowdale, the various artists tackle Leona Drive as an archive of post-war values with both a sensitivity to the lives lived there and a critical rigour that refuses to participate in a naive and simply nostalgic conception of the time and place in question. 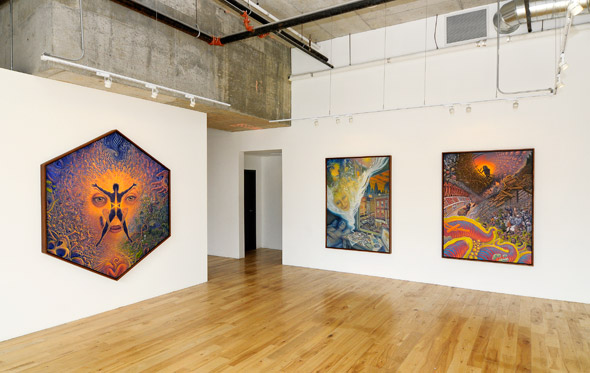 Although I missed the opening, I made a point to stop by Meta Gallery when it was quiet so that I could take a long look at Mark Henson's paintings, the sample images of which I found intriguing. Through use of saturated and bold colour, Henson's canvases command the viewer to immediate attention, but it's the intricacy of his depictions and the obvious narrative elements of his work that hold it. 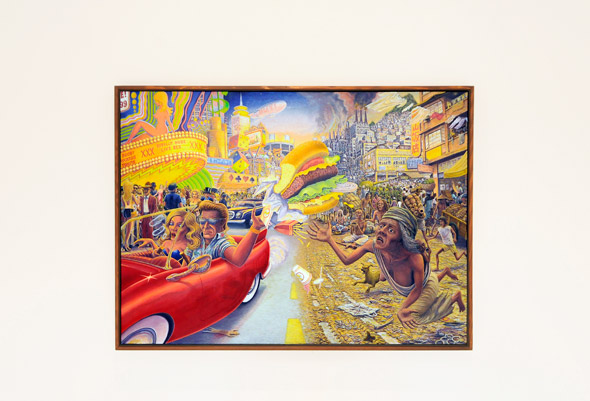 Split between what might be (too) simplistically categorized as dreamlike and nightmarish subject matter, "Fear, Hope and Love" takes contemporary (North) American culture head on, exploring the divide between the consumer and the means of production. In "Sharing the Wealth" for instance, Henson employs the relatively straightforward formal logic of a roadway to divide the "haves" and the "have nots," split as it were, by the path of a bright red (and very American looking) convertible. Close attention to the perspective of the painting, however, reveals the inevitable intersection of the two cultures, which deftly hints at the complicated interdependence of the very binary structures the painting seems to engender and endorse.

I also particularly enjoyed "Fast Food Chain," which plays with the literality of the title by offering a sort of genealogy of consumption.

Mark Henson's works are on display at Meta Gallery until December 23rd, 2009. 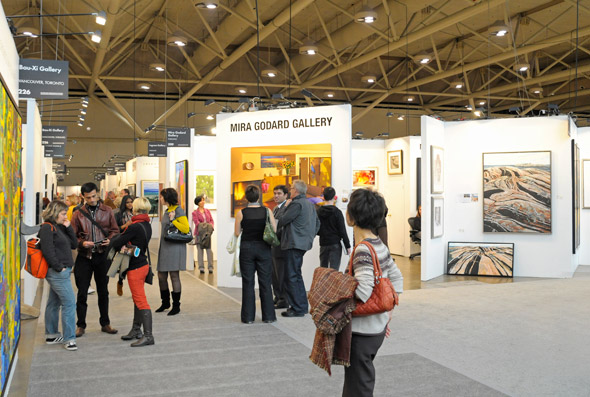 Aside from the Leona Drive project and Mark Henson's show at Meta, it was a pretty slow week for openings in the city. After a trip to Art Toronto, it wasn't too hard to figure out why. Most of the major galleries in the city -- not to mention a number of others from across Canada, the U.S. and further afield -- participated in the annual event. 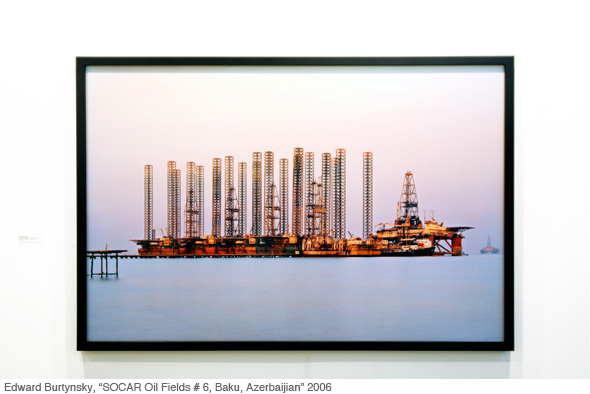 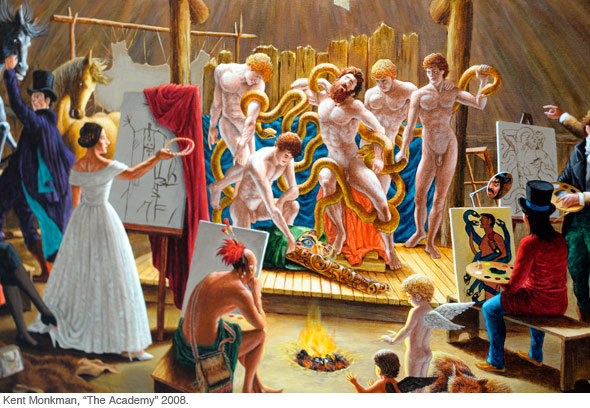 Edward Burtynsky, Alec Soth, Jean-Paul Riopelle, and Kent Monkman (to mention a scant few), in what is oddly quite an intimate setting. Along with this spectacular, significant, and pricy work, the Jeffrey Spalding curated flagship exhibition, "Heartland," was a necessary and satisfying nod to both the diversity and strength of Canada's established arts scene. Separated from the rest of the fair, this exhibit alone was might have been worth the price of admission.

Rob Southcott's "Under the Table" at 47
When I had my first look at this installation, I was underwhelmed. Four giant "table legs?" Surely I'm missing something, I thought. As it turns out, I was and I wasn't. On the one hand, there is no additional element to this show. But on the other -- as I was to find after spending a little time contemplating Southcott's work -- what you see, isn't necessarily what you get. As I dwelled in the gallery space a for a little while, my mind finally kicked into gear, and I realized that there's a sophisticated challenge posed by "Under the Table." 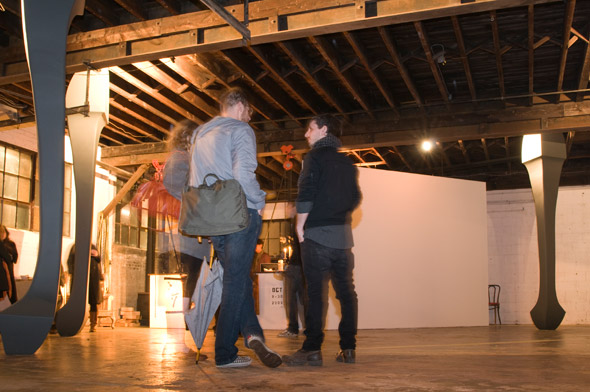 Despite the formal simplicity, the implications of this particular transformation of 47 are quite demanding of the viewer. And here I can't help but recall the (extensive) production notes from Tennessee Williams' The Glass Menagerie. In describing the setting (or, more aptly, the stage) of the play, Williams' offers the following: "The scene is memory and therefore nonrealistic." 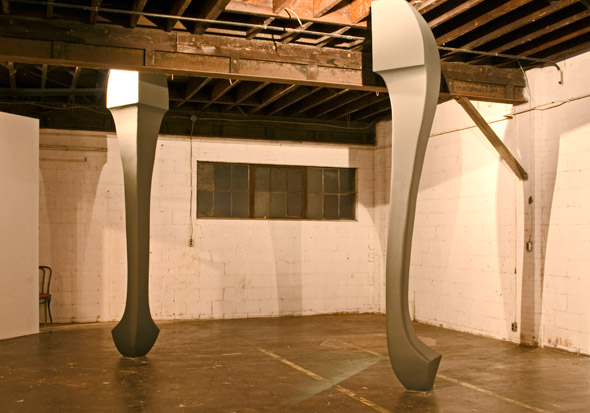 Another way of putting this, of course, is to say that the play takes place not inside an apartment, but within a brain. Like this direction from Williams, "Under the Table" asks the viewer to engage fully with the notion that he/she is under a table -- to take the figurative construction as real, if only momentarily. And, if the challenge is (really) taken up, wonderful and perhaps discomforting things happen. Beyond noticing that 47's wood ceiling resembles the bottom side of a table top, the creative participant (no longer just a viewer) is left to experience the odd, invigorating and even alienating experience of being half-hidden and profoundly small in relation to his/her surroundings. 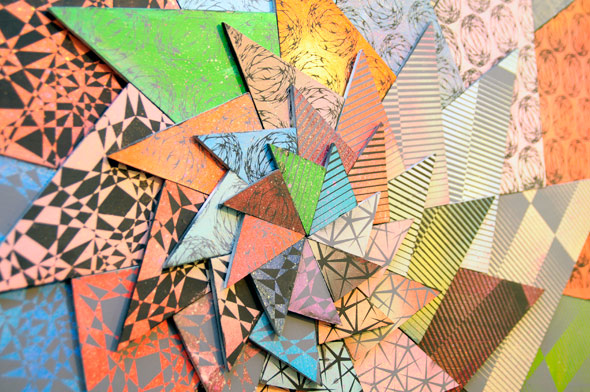 At LE Gallery, James Gauvreau and Anna Pantchev team up on "The Invariant Set," an installation that explores both geometric and cosmological principles. Having seen each artist's work before, I can testify to the fact that the collaboration brings out the best in both of their practices. Indeed, it's pretty obvious that they've worked together before and are adept at combining their talents. The ever-so-slight three dimensional quality of their layered installation(s) seems a natural way to explore the degree to which abstract geometric formations interconnect across both contemporary artistic practice and the natural (or "real") world.

Also on display at LE is Amanda Needham's "Tapping the Admiral," which features graphite works that conjure up the torture machine from Kafka's "In the Penal Colony" and a variety of specimens found throughout natural history museums. 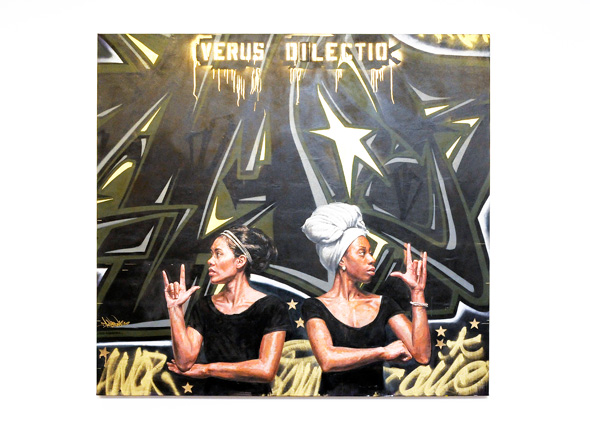 Over at Show & Tell, the collaborative work of 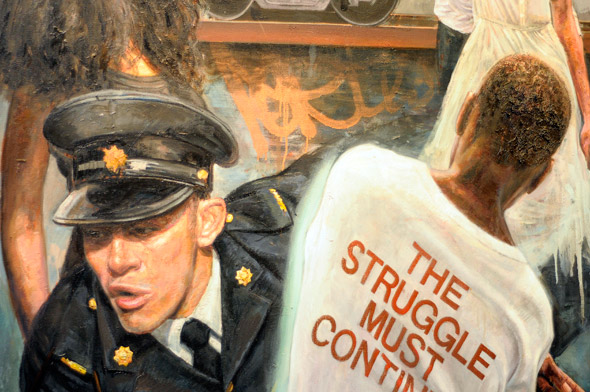 Tim Okamura and TheKidBelo also features a symbiosis that belies the fact that the two artists combine very different skill sets. Okamura, from New York, works predominantly with oil (although he often puts other media to use in supporting roles), while Calgary's TheKidBelo is a well-known graffiti artist. When working together, TheKidBelo will often prepare the canvas by creating a background or milieu for Okamura, who then fashions a portrait-based work within the "environment" he's been provided. Although each artist also has excellent individual pieces in the show, I found that I favoured the collaborative works (even before I knew them as such).

Circuit Gallery Launch Reception
Having just visited with Susana Resiman and Claire Sykes to profile their online gallery (coming soon), I can strongly recommend that those who love art (and in particular photography) make it out to this show/launch. The work is wonderfully affordable and very accomplished. If you can't make the reception, check out the website.
The Department, 1389 Dundas St. West. Thursday, October 29th, 7-10pm.

Bertrand Carrière, Lieux Mêmes
A fascinating archival journey and an exploration of the photograph's relationship with history, Lieux Mêmes traces Carrière's quest to follow in the footsteps of an unknown World War I photographer across many of the significant battlefields of the Great War. More than landscapes, the resultant images are studies of time, renewal, and that which cannot be erased or forgotten.
Stephen Bulger Gallery, 1026 Queen St. West. Saturday, October 31st.