Although I'm not exactly sure why, my artistic engagement always wanes a bit over the summer months. Perhaps this is the result of an increased desire to spend time out of doors and that I get my fill of stimulation primarily from physical activity. Or perhaps it's because most of my July is split between watching Tour de France coverage and making feeble attempts to match these cyclists' gargantuan feats of endurance by repeatedly riding every hill I can find in the city and its environs. While I don't want to imply that art and sport are mutually exclusive pursuits - a claim I've always contested - for whatever reason, the warmer the weather, the fewer the number of exhibitions I tend to get excited about.

This summer might, however, prove to be an exception. Over the last week or so, I caught three shows around town that got both my creative and critical juices flowing. 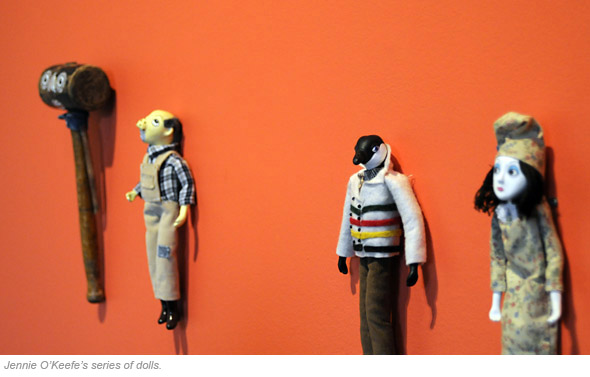 Perhaps the most significant of these shows - at least based on venue and duration - is "Pulp Fiction" at MOCCA. On long-run throughout the summer, "Pulp Fiction" showcases fourteen Canadian artists whose work might be considered an odd fit for exhibition in a national gallery. There are many reasons for this, but two in particular should be highlighted: the putative lowbrow (hence, "pulp") style of most of the pieces, and the tendency of the artists involved - many of whom have collaborated over the years - to bypass traditional galleries when exhibiting their work. 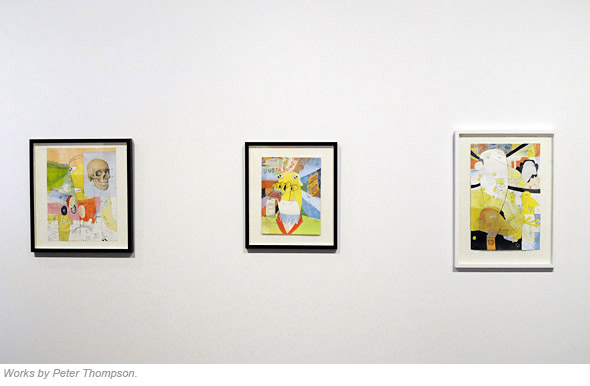 It would be na誰ve to think that the above aren't completely interrelated. Although the lowbrow art movement has now received substantial attention from the mainstream art world, historically speaking, artists whose work might have fit such a description received sparse attention from galleries and collectors. It's in keeping with this that I tend to view "Pulp Fiction" as an exhibition that is as concerned with examining the complicated role of the museum/gallery as it is about highlighting the individual pieces on display. Indeed, if there's a criticism to be made here, it's that intricate pieces and/or those with prominent narrative elements - like the ink drawings by Marc Bell and Peter Thompson - are bound to get short schrift as a result of the sheer number of other works on display. In other words, this exhibit rewards multiple viewings.

For a show that also challenges the conventional role of the gallery/museum but that is more tightly focused (being a collaboration of two artists), one need only walk around the corner from MOCCA to XPACE. In its current show, "MOTEL," Alison S. M. Kobayashi and Gintas Tirilis exhibit the results of their repeated explorations and excavations of a strip of derelict motels along Lakeshore Rd. in Etobicoke. At once a nostalgic take on the uncanny romantic qualities of the old-style motel room and a serious interrogation of the relationship between artifact and museum, this show is both playful and engaging. 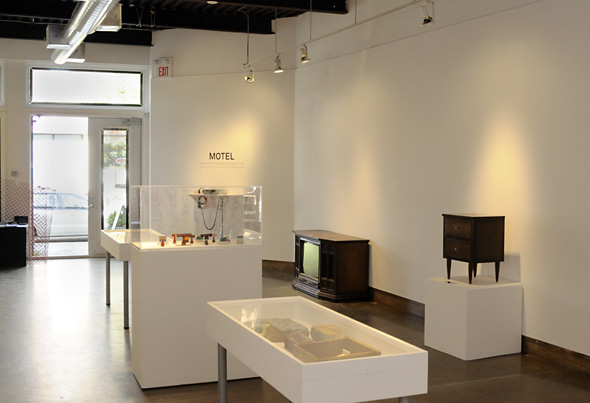 Of particular interest to me are the implicit ethical questions that this show poses. Although the motels from which the artifacts that make up the exhibition were sourced all laid in an abandoned state of disrepair at the time of Kobayashi and Tirilis's visits, the curatorial statements are quite open about the fact that the various explorations and removal of objects were technically illicit. And yet, this show is, if nothing else, the record of a series of salvaging acts. 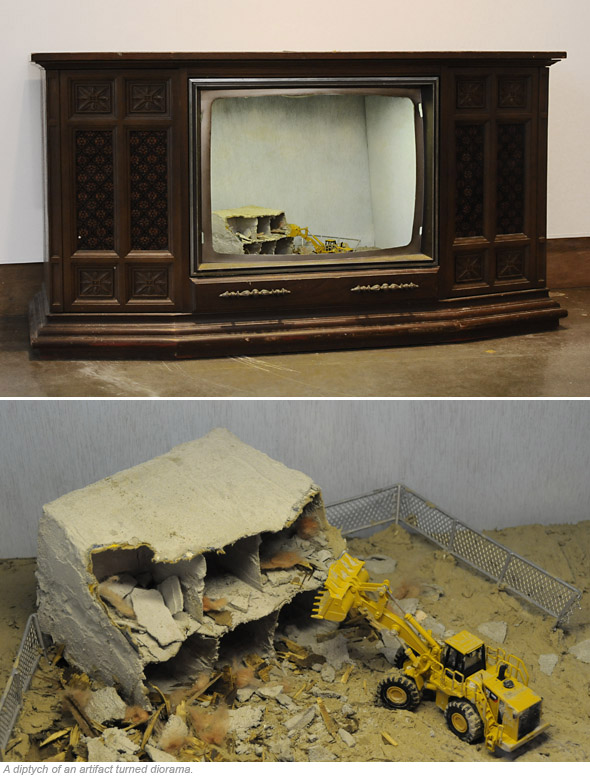 The question thus becomes, does this intention to preserve take priority over the lack of legal authority to undertake such an operation? This is a question archeologists, curators and art historians have been grappling with for ages in relation to situations with far greater stakes. Although MOTEL doesn't operate as an overt statement about this complex issue (which could be boring), that it engenders such questions while also commemorating a piece of Toronto's past is engaging stuff to be sure.

Also participating in a sort of questioning of the role of the gallery/museum is the Mercer Union. Its two most recently opened shows - both of which are video installations - effectively turn the Mercer into something of a makeshift movie theatre (although lacking the comfortable seating). While it's not uncommon for galleries to exhibit such video/film-based work, it is pretty rare to see an entire space devoted to it. 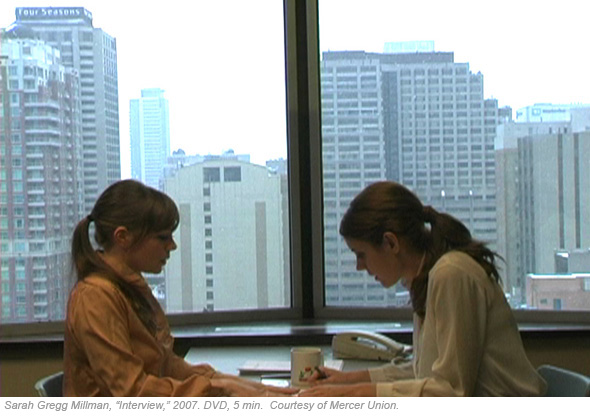 The front gallery features a series of video works by Sarah Gregg Millman under the title "A Fun Time is a Great Time." Her all-female characters tend to express a dissatisfaction with contemporary existence that is part social and part existential. Not easy to interpret in one viewing, it's best to examine the videos collectively so as to see that this malaise has complicated and diverse sources. While it might be seductive to place Gillman's videos within a feminist tradition, the critical question should be: "which one?" To me, there is a very obvious resistance to second wave feminism's faith in a universal female subject. In its place, and despite their often very short length, these videos highlight the plurality of class positions that are constitutive of identity in general.

In the back gallery is Johanna Billing's twenty-seven minute video featuring a group of musicians learning to sail off the coast of Edinburgh. My first response to this work was that of boredom. But, upon closer examination, I've come to appreciate this video as an intriguing study of the anxiety and accomplishments that go hand in hand with the learning process. Backed by a soundtrack that features a cover of the Arthur Russell song from which the piece takes its name, "This is How We Walk on the Moon" operates as an allegory for both the vulnerability that accompanies the tackling of new challenges and the human need for encouragement and positive reinforcement. And, if watched long and closely enough, it reveals the childlike joy that accompanies the first tentative steps toward mastery of a given task.