Luminato 2009 had its launch parties last night. And while there was an invite-only affair at the National Ballet School as well as a free concert in Dundas Square, what seems to have gotten everyone's attention is one giant red ball.

Pictured above, the giant red ball made its first Toronto appearance early yesterday outside City Hall. This city is the ball's latest stop on what's become an international tour with brief stays in Barcelona, Sydney and Chicago to name a few. Officially, the exhibit is known as Kurt Perschke's Red Ball Project. Already at least one video has surfaced on YouTube but the project's official site has plenty more including installations in Portland and St. Louis.

In Toronto the ball will bounce around between 8 different locations. On Sunday it crosses Bay St. to Old CIty Hall, before heading further south to First Canadian Place and eventually the Harbourfront Centre Bridge on June 14th. The full schedule is on the project's web site and a map of its impending locations embedded below.

For more info on the project, check out the National Post's interview with Kurt Perschke himself.

Beyond the red ball there's plenty more to soak in from the 2009 edition of Luminato (June 5th - 14th) including music, dance, theatre, lit and a bunch of random stuff. A full list of events can be found on the official Luminato site.

Like any festival with dozens of events and exhibits on the programme, it's almost impossible to take it all in. So to help separate the ballsy stuff from the more pedestrian on the agenda, here's a brief list of the few things not to miss.

1,000 Tastes of Toronto
Forget Toronto a la Cart, this event promises to be the real deal when it comes to eating on the street. For two days (June 13th and 14th), a number of Toronto's top chefs will descend on the waterfront to cook up gourmet street food for $5 a meal.

The Canadian Songbook: A Tribute to Neil Young
With tickets to this show at Massey Hall starting at $60 this isn't your average tribute concert. Guest musicians including Jason Collett, Steven Page and Cowboy Junkies gather for an 8pm show (June 10th) to recreate a 1971 solo concert by Neil Young at this very spot.

Tales of the Uncanny
On the other end of the music spectrum is a free concert/film scheduled for June 11th at Dundas Square featuring local heroes Final Fantasy and Do Make Say Think as well as Berlin electronica artist Robert Lippok. They'll all be providing the soundtrack to a screening of a 1919 German Horror Film called Takes of the Uncanny.

Goran Bregovic at Yonge Dundas Square
If you're like me you probably don't have Goran Bregovic on your iPod playlist. But this is the guy who provided the soundtrack to Borat AND is a huge star in his native Sarajevo. $45 will get you in to his CD Release party at Kool Haus but why bother with that if the night before you can dance along for free. June 12th, 8pm.

Bell Orchestre Free Concert
It's almost impossible to find details about this event on the Luminato site but Bell Orchestre will be giving a free concert as part of the festival at the Sirius Stage at Harbourfront Centre. June 13th, 8pm.

National Ballet of Canada: Carmen
In this classic Bizet ballet, Carmen is re-conceptualized by the provocative Italian choreographer Davide Bombana, giving it a modern, carnal adaptation. Carmen is coupled with Skin Divers, inspired by Anne Michaels' book of poetry, which incorporates both spoken word and visual projections as complements to Dominique Dumais' choreography. Both are North American premieres. 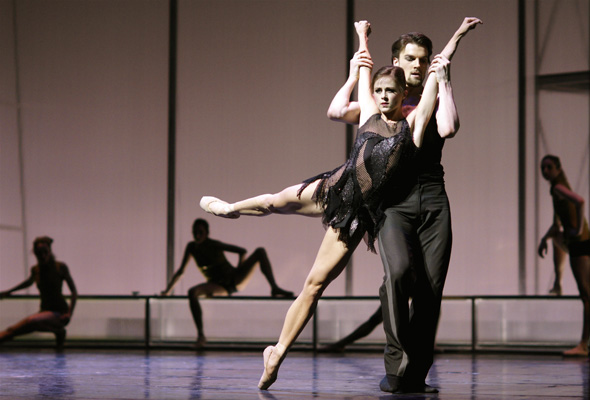 Gothic Toronto: Writing the City Macabre
Margaret Atwood will give an intro and then six Toronto authors including Andrew Pyper and Ann-Marie MacDonald will read short stories specifically penned for this occasion. They're all supposed to be a riff on the city's goulish past. FREE. June 10th, 7:30pm at the Music Gallery.

Communication | Environment
There are tons of free installations to check out including David Rokeby's long wave at Brookfield Place and Broken Arrow at the Exchange Tower. There's also an ongoing Luminato Box series kicking off with yesterday's Icebreakers exhibit by OpenCity Projects.

Illuminations: Shadow Notes
This is an exhibition presenting the work of Danny Clinch and Ralph Gibson (two photographers obsessed with music) and the photos of Andy Summers (a musician obsessed with photography) for just $15, with a related free exhibition in Yonge-Dundas Square.

Raphael Mazzucco Mixed Media Installation
One of Canada's most renowned fashion photographers exhibits all week at the Burroughes Building. Try to crash the private launch party, 6pm on June 8th.

Cirque du Soleil
The world's most popular collection of people in tights make an appearance at Ht0 Park to close out the festival. They will be there for the last three days of the festival but the time to go should definitely be at 9pm on the closing night (June 14th).