BIG on Bloor comes back this weekend for its second year of street festivities from Lansdowne to Christie. And Toronto artist Richard Mongiat has returned to paint the north side of the Lansdowne & Bloor underpass, continuing the mural he created last year for the south side of this otherwise dreary stretch of Bloor. 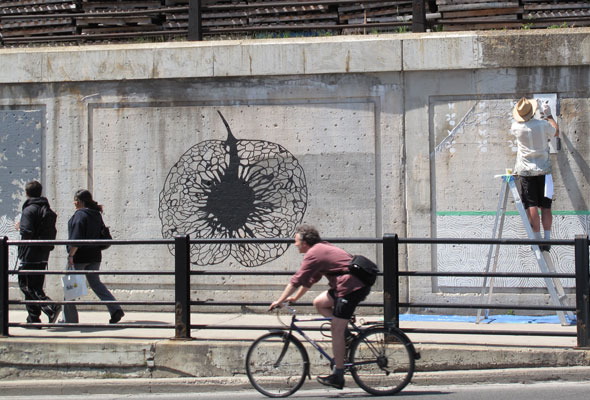 The south mural weathered the winter with style. Mongiat's limited palette of white, black, and grey complements the concrete instead of hiding the battered urban landscape. And it's resisted the peeling that often plagues Toronto's murals. The Underpass Project is sponsored by the City's Clean & Beautiful committee.

Most passers-by are enthusiastic, though Mongiat agrees that some are surprised by the neutral colours. "In their mind, they think of a mural and they think of cleaning up the neighbourhood." But Mongiat doesn't want to sanitize and cover up the 'hood. He wants to celebrate the place, creating the mural as an addition to the concrete and railway overpass. Walking beside the mural, I think the art is like a ongoing conversation with the industrial past and the present. 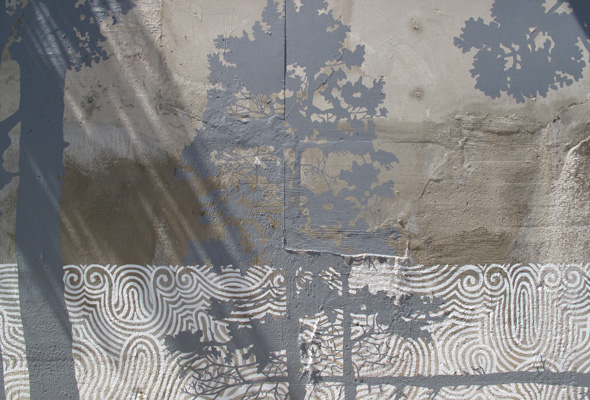 Only a few lines of graffiti have been added to the south mural over the past twelve months. Mongiat plans to touch up the affected panels, but doesn't want to remove the graffiti. "We had someone say they [graffiti artists] should be hanged. From the bridge." He shakes his head--the graffiti doesn't upset him. It's all part of the canvas, and the conversation. "I think it might look quite good, broken up. I'll put some design back, on top, but I like working with what's here." 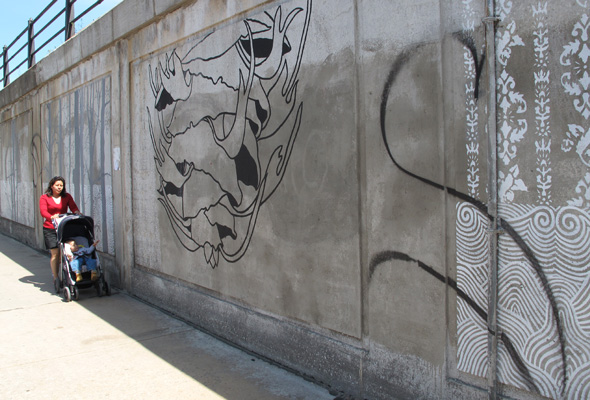 An older resident pauses to chat with him, asking what kind of fruit he's painted on the north wall. She touches the fresh paint carefully, almost reverentially. The north mural continues the same three motifs as last year's mural: white wallpaper-inspired patterns, grey tree silhouettes, and powerful black-line close-ups of the natural world. The south mural was inspired by winter, and rebirth--the rebirth of this neighbourhood, Mongiat said last year. And now, in the blazing sun, his new work celebrates summer, with leafy trees and lush fruit drawings.