It's not uncommon to see people begging for money on our streets; in my Roncesvalles neighbourhood there are regulars, each of whom has their territory, generally spaced a block or two apart. It's easy to overlook, walk by or otherwise ignore these members of our community, and it's also all to easy to assume those who beg aren't so bright.

A new piece of art on the wall of a former bank at the corner of Roncesvalles and Fermanagh (High Park Blvd) is combating that notion - and turning more than a few heads. As shown in the pictures above and below, it is an image of one of the regulars on Roncesvalles holding a sign that simply states: "We may beg for change, but we're not stupid."

The artwork has the signature look, feel, and style that one would expect from popular Toronto street artist Dan Bergeron (aka Fauxreel), and I have no idea how long it will last.

The work can be found on the southeast corner of Roncy/Fermanagh, opposite the streetcar shelter. The man depicted can usually be found two blocks north near the Timothy's. He asks for change and/or odd jobs.

UPDATE: Thanks to our always-alert readers, as the comments below state, this work is part of the CONTACT photography festival. blogTO may be a sponsor, but I personally was not familiar with this entry and after doing some searching (now, I realize, with keywords not used by the artist), the broader context for the piece. Nonetheless, the written content is as true now as it would have been two weeks ago and since I walk by the wall where this particular piece is several times a week and only noticed it two or three days ago - and I haven't seen it in any of the other galleries - it's as timely as can be, and the first blogTO post on the subject. 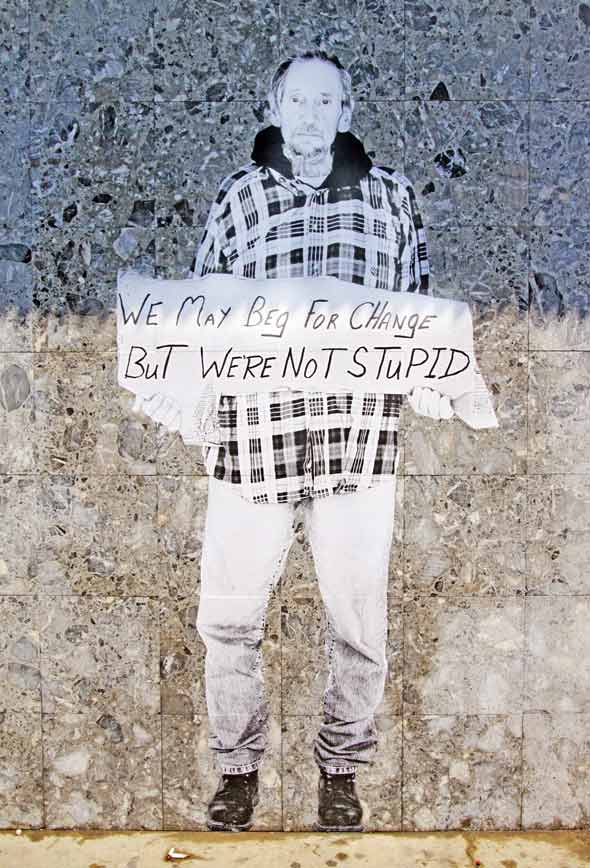