Fall colours in and around Toronto are popping up everywhere, which means lookout points around Ontario will be offering even more breathtaking views for the next few weeks. Luckily, you won't even need a set of wheels to get to one of the many observation spots within an hour or so from the city.

Here is where to see some fall colours near Toronto by public transit.

This 250-acre nature sanctuary lies right behind the RBG and has two boardwalks leading to numerous lookouts. Those lookouts give way to a colourful deciduous forest and marsh. Take the Lakeshore West GO train to Appleby and then the 1 bus to Plains at Botanical. 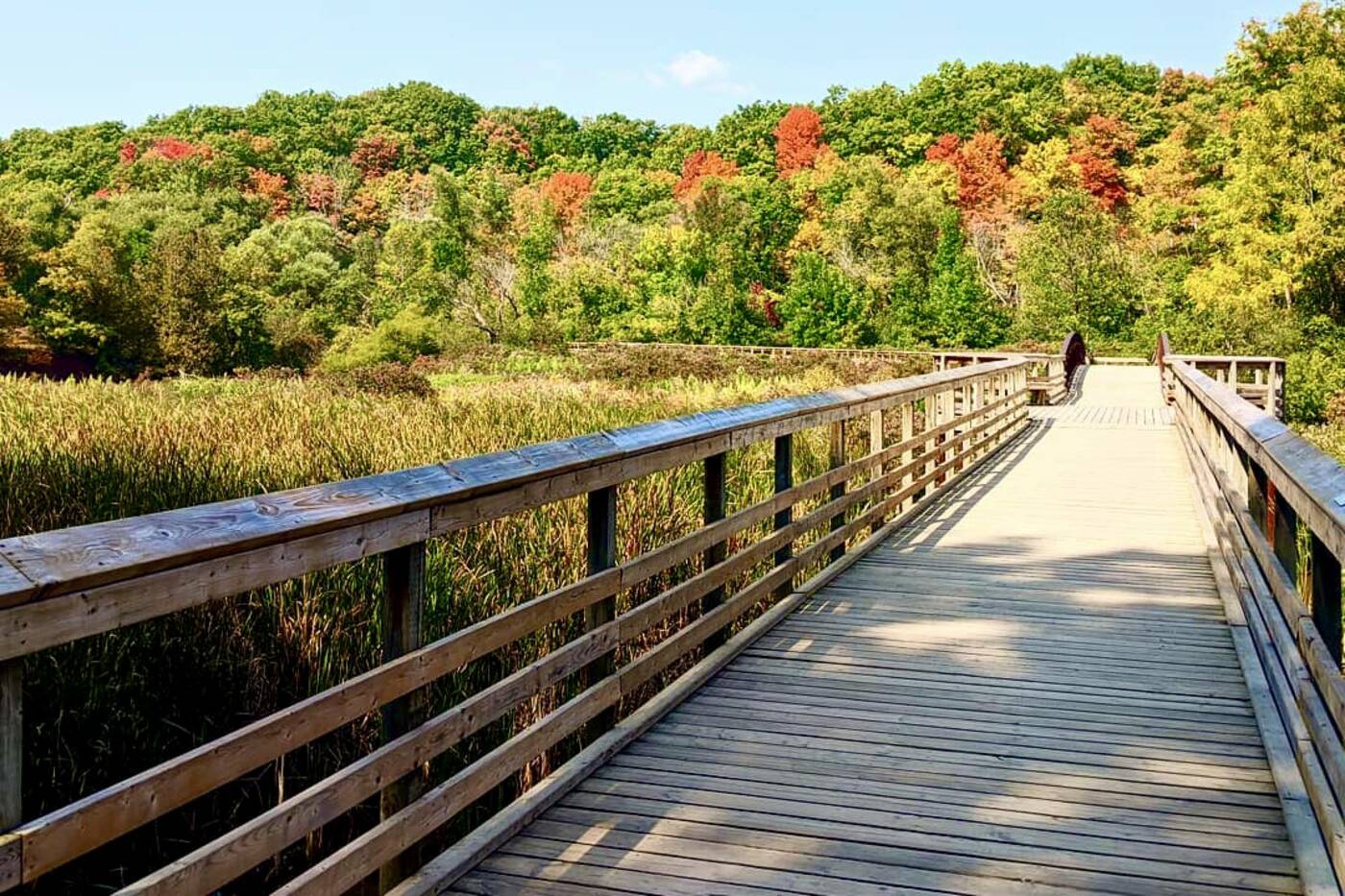 Hendrie Valley is home to boardwalks leading to forest and marsh lookouts. Photo by @mandigould.

It's easy enough to get to this conservation area – take the Megabus heading to Niagara Falls (there are three services every day) all the way to Grimsby and walk 20 minutes from there. Or book yourself on the VIA train. Once there, check out three different observation points.

It won't take much more than an hour (and one bus transfer) to get to this natural oasis on the outskirts of the city. There are about eight hiking trails in the park, but Vista Trail is where to find a two-level observation deck. 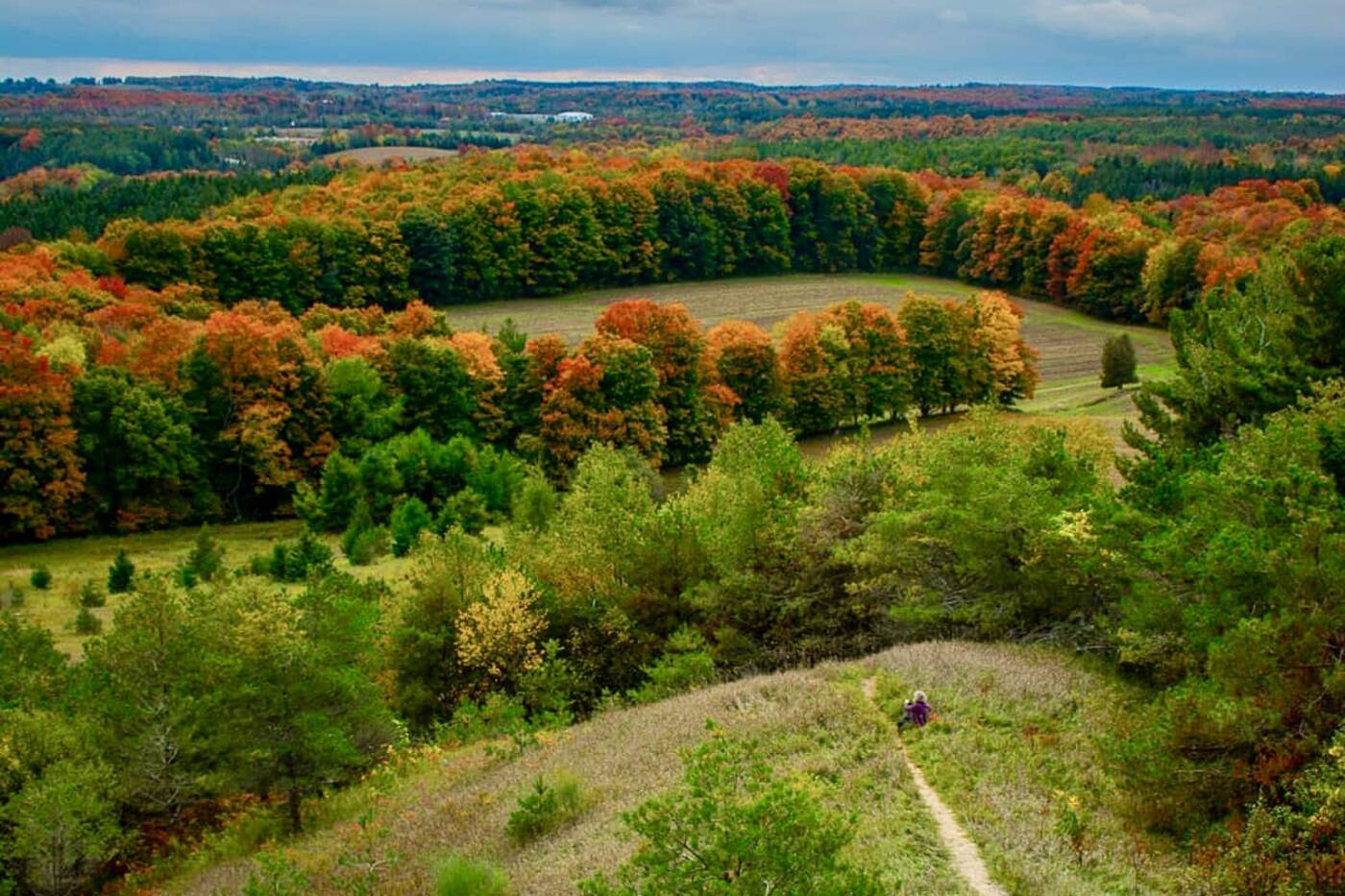 Boyne Valley has a pinnacle where you can check out countryside vistas. Photo by @traildad87.

Murphy's Pinnacle Lookout at this park has sweeping views of the countryside. And it only gets better once the leaves start changing. Coach buses head to Orangeville (take an Uber, taxi or bus from there) only about four times a week, so make sure to plan ahead.

This waterfall is one of the most picturesque cascades Hamilton has to offer. The trails through the area offer a couple of lookouts from where you can view the falls surrounded by autumn leaves. Slot out two hours to catch the GO train to Hamilton and another city bus after that. 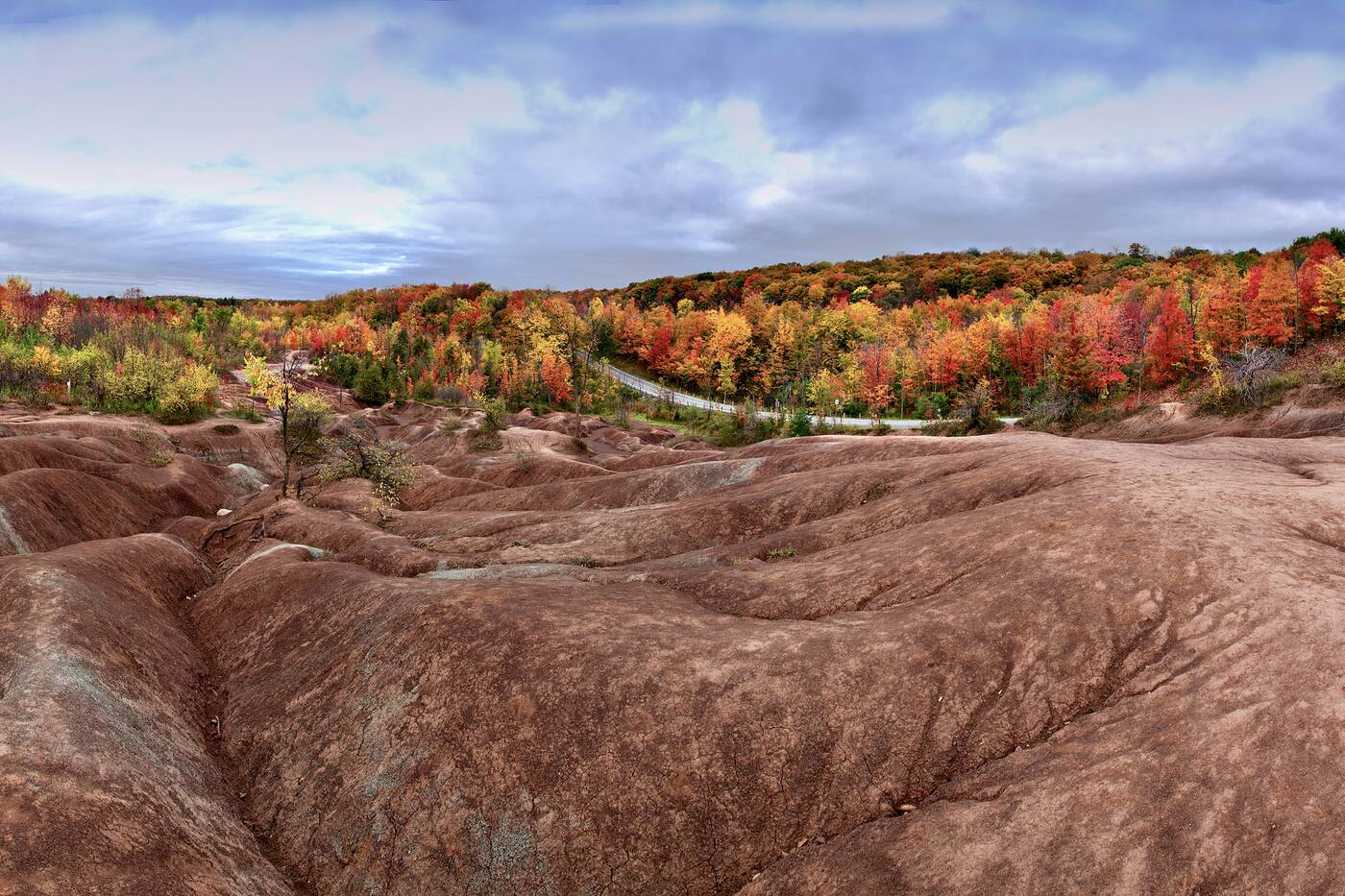 Cheltenham Badlands is where to find Mars-like terrain not far from the city. Photo by Blue Palette.

The red dunes at this natural attraction in Caledon look their best next to autumn colours. Take the GO train toward Kitchener to Mount Pleasant. From there, you'll just need to order a 20-minute Uber or taxi. Not bad for a visit to a place reminiscent of another planet.

The Lakeshore West GO train will get you as far as Appleby station and a 15-minute Uber or taxi will deliver you the rest of the way. Admire views of the Niagara Escarpment, and even Toronto's skyline on a clear day, from the Brock Harris Lookout at Mount Nemo Conservation Area. 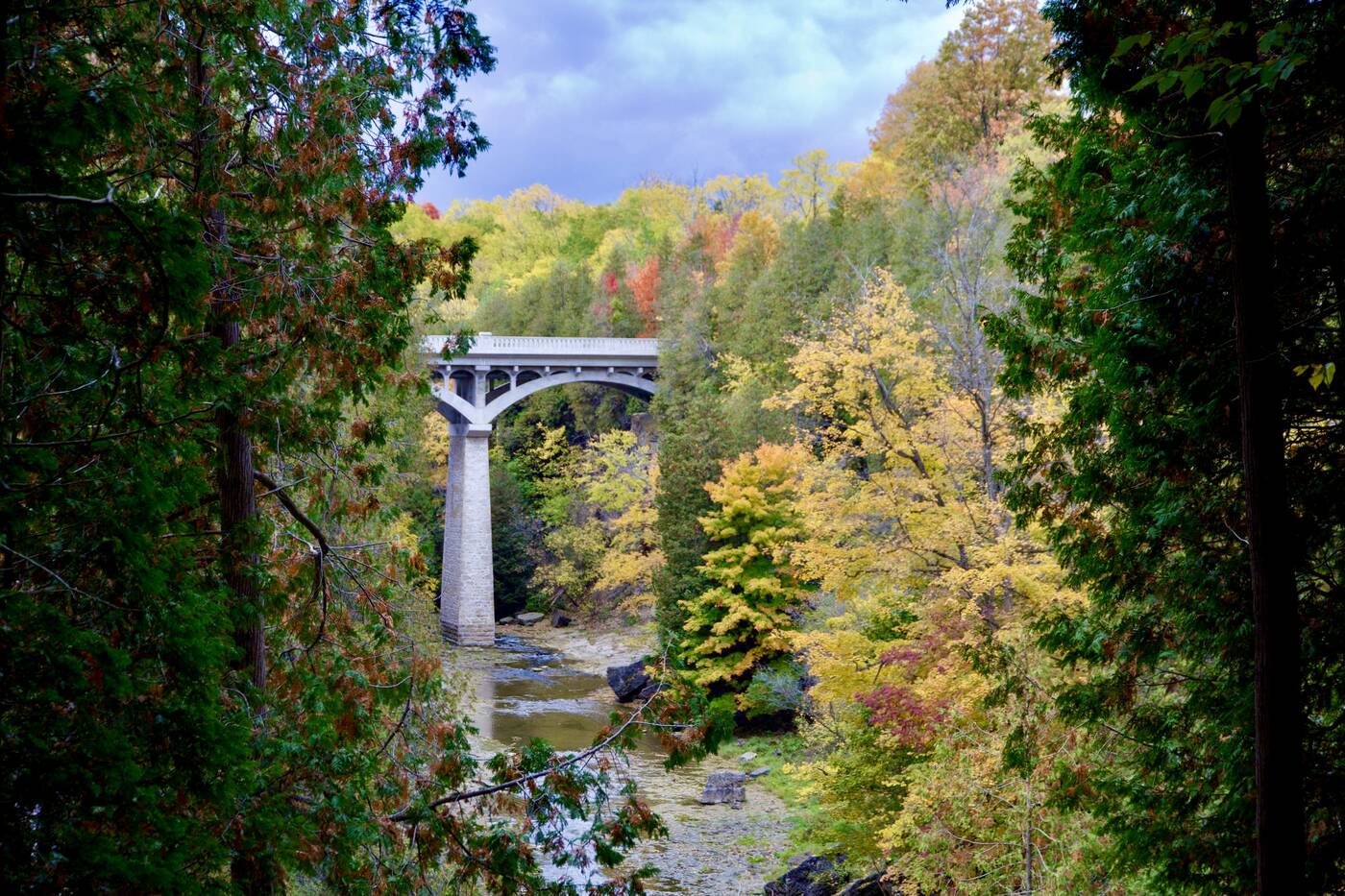 Elora Gorge is home to viewpoints of a gorge surrounded by towering cliffs. Photo by Artur Staszewski.

Parkbus makes it really easy to get to this conservation area known for its rushing gorge and high cliffs. Add in some yellows and reds and you have one of the best views around. The hour and a half bus drops you off at 10 in the morning and heads out around 3 the same day.

This spot along the Niagara Escarpment features viewing platforms to two different waterfalls. The area is also known to burst with every colour known to fall thanks to its lush greenery. Just take a Megabus to St. Catharines – there are three per day. 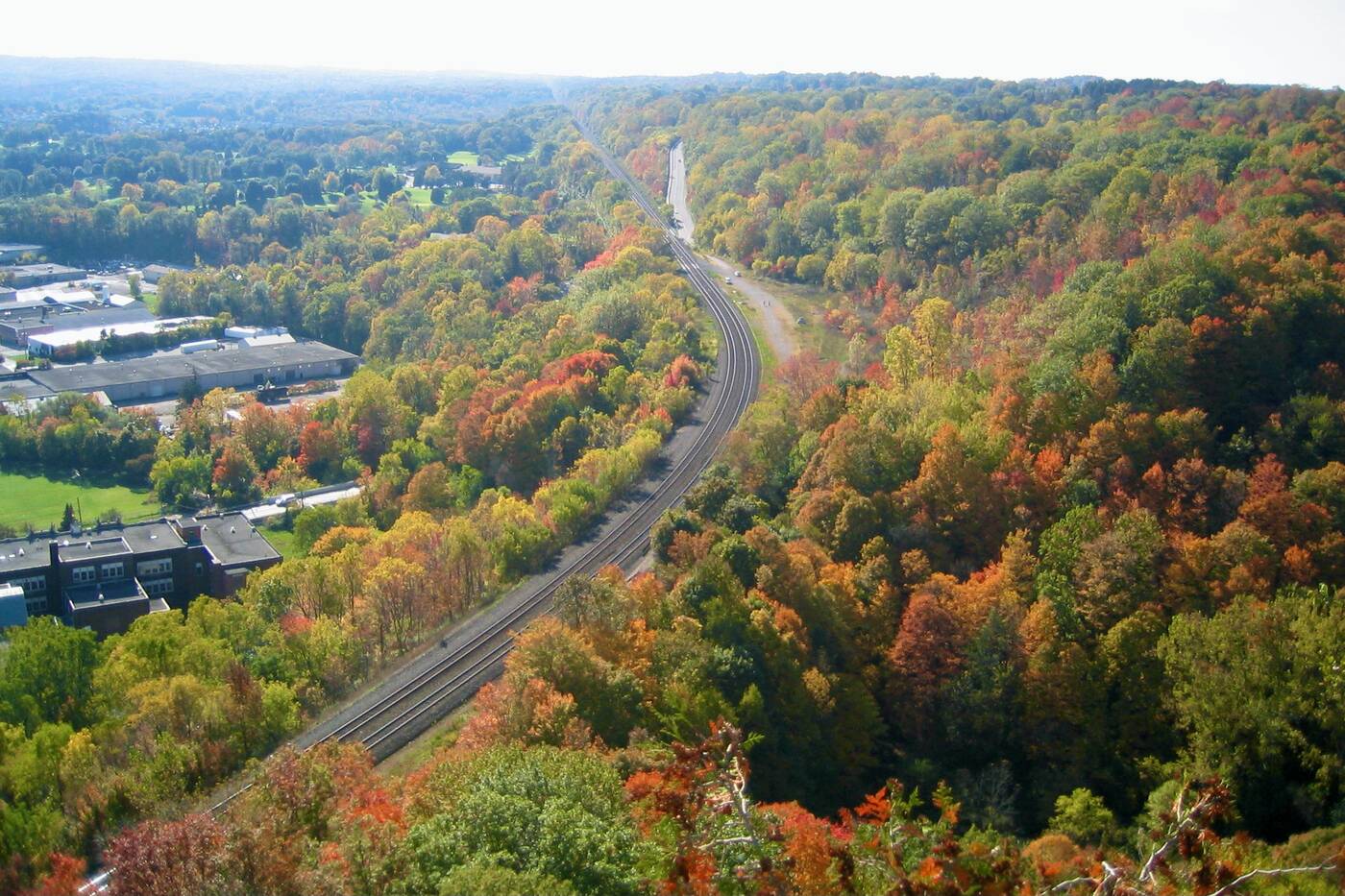 Dundas Peak is one of the most picturesque overlooks near Toronto. Photo by Paul.

No lookouts really compare to this spot that provides a perfect perch above the colours only an hour from the big city. Although the Parkbus route isn't currently running, you can still get on the 16 GO bus, a Hamilton city bus and you're there in under two hours.