This week I visited the Horse Palace at the Canadian Exhibition Grounds. There I met a Staff Sergeant with the Toronto Police's famous Mounted Division, stopped by the stables that carry on a 195-year equine tradition at the grounds, and gawked at a miniature pony living in sin with an African Pygmy goat... 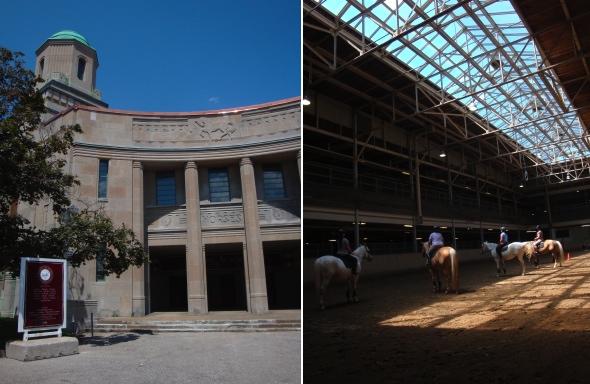 Sometimes I envy my foreign friends. The Brits, the Chinese, the French... when it comes to their various heritages and histories they have great stories to recount. Usually the story goes something like this: Their people seized their land from a less powerful people, or were given the land by some divine brushstroke, hordes of invading barbarians came and went, great dynasties rose and fell and rose again and along the way their people revolutionized the arts and sciences forever. It's a great story!

When I think of my own country's heritage, I usually end up with something like this: British and French hustlers traded their guns for fur pelts and then hockey happened? And Laura Secord couldn't fly but she could leap over tall buildings... to deliver chocolate(?) to... a guy who needed his peach baskets back... and the kids had to keep their Irish names but... both of us know they canna read a word?

It's tough to wring pride out of this story, but then again I might not have my facts straight. Sometimes it takes visiting a historical place to bring the real story to life, and to remind me that we do have a real and storied history here in Canada.

And so this week I went to the CNE's Horse Palace, a place so immodestly named that it sounded just right to boost the pageantry in the past I perceive.

Built in 1931, around the same time and in a similar art deco style to the Beaches' Water Castle, the building lives up to its wonderfully pompous name. The copper cupola is surrounded by stylized carved stone horses, and the letters on the west end of the building, surrounded by Greco-Roman columns and more animals carved in relief, read simply "Horses." (I want one on my apartment door that says "Guy.")

Inside, the main riding ring is beautiful with a soaring glass cathedral ceiling. On my visit there were five horses with riders completing a lesson, circling the ring in taught and measured gaits.

This main ring is used by the Horse Palace Riding Academy. Being housed in "one of Canada's finest riding facilities" is a pretty big bonus for the students who are offered lessons and therapeutic riding sessions here. Personally, horses are my nightmare (or nightstallion?... oh, that's totally my new Plentyoffish.com screen name) and so I would probably need therapy after the riding lessons.

For those members of the public who are like me and are terrified of horses, rather than paying to ride them, you can just stop by to visit them. Cheap thrills are a good thing in my book, and at the Palace the horses didn't disappoint in thrilling me cheaply. They were large and powerful and each one looked perfectly capable of biting my face off at any moment. Woo!

Parker the horse was especially frightening. An appaloosa (I think), his coat perfectly matched the chipped paint on the walls behind him- camouflaging him, like Predator. I'm not sure if horses are really supposed to blink or not (they probably are, right?) but not only did Parker never blink, but his blank horse stare sliced into my soul like ten thousand swords of sadness. He looked like he needed an exorcism and maybe a good loving bubble bath. 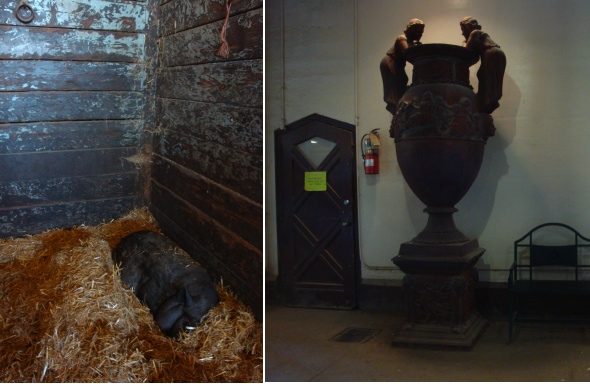 A few doors down from Parker I found a Vietnamese pot-bellied pig named Lucy. The pig just slept there, in the hay, content to be bulbous and meaty. 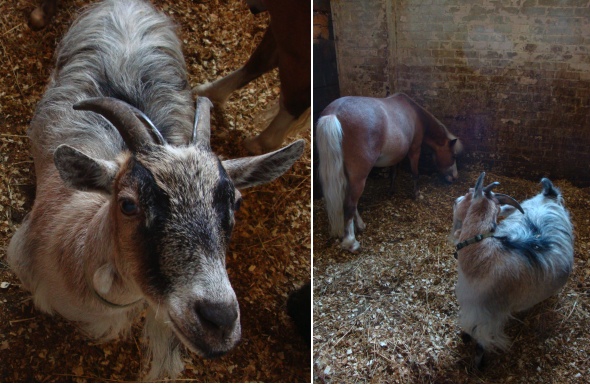 Across the aisle from Lucy I met Cooper and Bandit. Cooper is a miniature pony, and Bandit is an African pygmy goat. My Dr. Dolittle notebook reads like this: "When I first observed the creatures cohabiting, I assumed they were lovers. They certainly acted like it, affectionate but fighting a bit over dinner. Bandit seemed to be the dominant of the two. I may have perceived, though, that he was dissatisfied with their domestic situation. He approached me as soon as I arrived, eventually coming on too strong and seeming a little desperate. I was embarrassed for him, and for Cooper."

But then I learned from their landlord's website, that both of the animals are males and castrated to boot. The story of their sordid inter-species love is sadder than I'd realized. 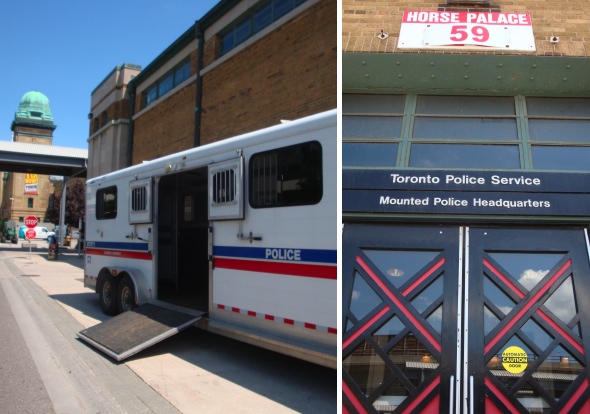 Next up was the Toronto Police's Mounted Division, at the north side of the Palace. I was greeted there by Staff Sergeant Tim Crone. Sergeant Crone was kind enough to show me around the division where I was subjected to a whole (nutha) other level of horse-terror.

The division has been using the Horse Palace since it opened, and now uses the building as home base. The division is home to 29 horses and about 40 officers and staff members. The people were nice enough, especially Mr. Crone, but the horses were epic Homerian monsters of mythological proportions.

Every single one of them was like a fleshy tank, but the be(a)st of the ball was a horse named Boot. Officer Boot weighs a couple bags of carrots shy of a metric tonne. He is 17.2 hands high, which, if you're not a horse person, means he is 5'10"... at the saddle. I am 5'8" in Air Force Ones. I could barely hold my camera steady (as you can see from the photos) as the auto-focus dealt with Boot's bulging Tyrannosaurus Rex muscles. 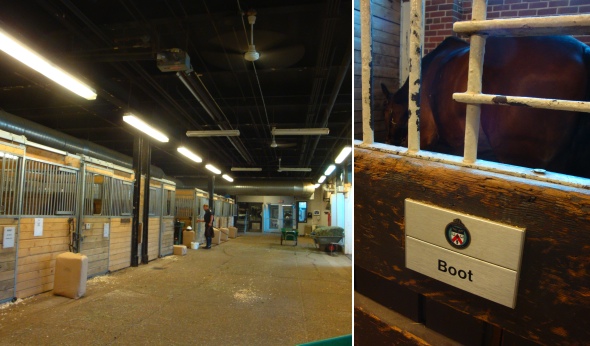 Getting the hell away from Boot, Sgt. Crone explained that they use the horses primarily for crowd control. A horse like Boot is the equivalent of about eleven officers in crowd situations. Nary an ornery protester nor an over-imbibed festival-goer would dare step to that shit. 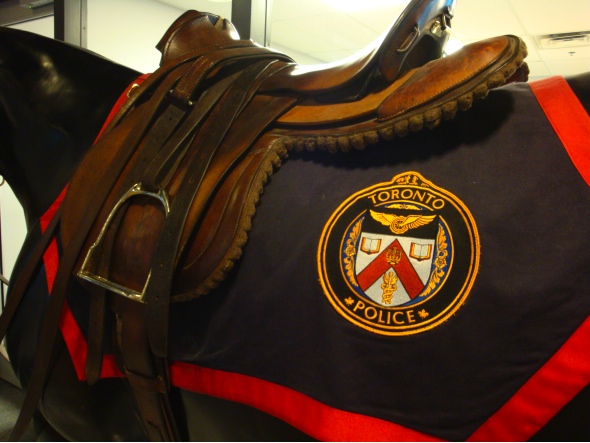 On my way out of the Horse Palace Sgt. Crone and I talked for a moment about the building and the history of his division. He told me that the mounted division was founded in 1886, making it the oldest division in the Toronto Police Service. On display in the lobby there were models showing the ceremonial uniforms worn by mounted officers. They were distinctly coloured, bright and decorated.

And then something clicked for me. These wacky uniforms come from somewhere; this style, this tradition, this whole place has a lineage that stretches beyond our fur-trading founders and back to something. Something maybe British, definitely flashy, but something I could feel. Our country's history became a little more illustrated for me in that lobby, and I felt proud.

GTA Tripping is a weekly column about various destinations and anti-destinations accessible by public transit around the GTA.