Uber is bringing its dockless e-bikes and scooters to Canada

Uber is gearing up to change the personal transportation game in our home and native land once again with a dockless electric bikeshare program they're calling "the future of urban mobility."

The rideshare giant's bright red JUMP e-bikes (and, in some cases, e-scooters) can currently be found on the streets of San Francisco, Los Angeles, New York, Chicago, Atlanta, Denver and Nashville, among other major U.S. cities.

Only Berlin and Lisbon appear on the service's website in terms of international markets, but at least one Canadian city will soon be joining them if a Linkedin posting for Uber's Toronto office is any indication. 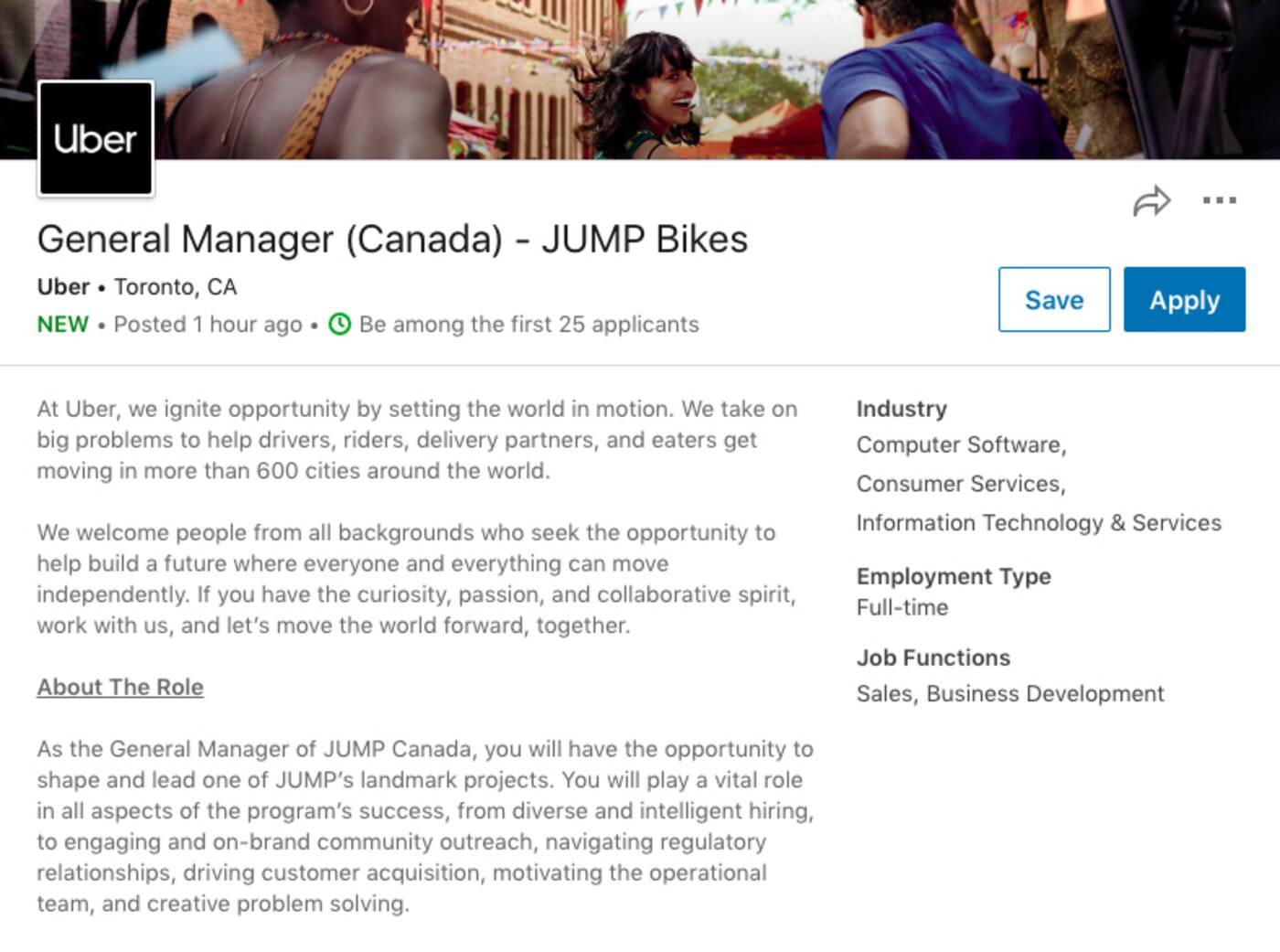 A jost posting for Uber's Toronto office in Liberty Village suggests that the company has big plans for expanding JUMP within Canada. Screeenshot of Linkedin.

"Cheaper than most public transit and faster than cars in traffic, JUMP e-bikes are game-changers for local transportation," reads the job listing for a General Manager (Canada) with JUMP e-bikes, which Uber aquired in April of 2018.

"Our goal is to transform cities, making them more sustainable, equitable, and livable through electric mobility," it continues. "To make this vision a reality, we need to grow our team."

They're clearly looking to grow that team at Uber's Canadian headquarters in Toronto, though it remains unclear if we'll start to see these high-tech, dockless e-bikes around our city anytime soon.

"We currently have nothing to announce for Toronto, but we're always exploring new markets where we could potentially expand the services we offer, including JUMP e-bikes," said Uber spokesperson
Josh McConnell when asked about the job posting.

Setting our sights on some new cities.

"We believe that bike sharing—working together with other shared mobility options—can help tackle congestion," said McConnell. "For example, our own data shows that adopters of JUMP e-bikes are replacing up to 15 per cent of their Uber trips with JUMP trips, especially during rush hour."

The Uber spokesperson did note that his company is "excited about the opportunity of offering more transportation alternatives in Canada, especially given the recent interest shown by cities like Montreal."

Global News reports that JUMP e-bikes will indeed start appearing around Montreal this May with e-scooters to follow in June or July.

Perhaps this is why the job listing for Uber in Toronto lists "French language skills" as an asset.