The Toronto of the future will be bigger, bolder, and (hopefully) smarter. New technologies and ideas are helping cities around the world improve the quality of life for their citizens by way of better transit, more accessible services, and modernized or repurposed infrastructure, and Toronto should be no different. While we're pretty influential (according to Forbes magazine,) there is still plenty the city could learn from the rest of the world.

Here are 5 useful ideas Toronto could use right now.

Reinvented phone booths
Phone booths are a dying breed. More than three quarters of Canadians have cellphones and as a result the telephones on Toronto's streets are increasingly forlorn and underused (most linger due to their applications in an emergency. In the subway, public phones are a vital piece of the Crisis Link suicide prevention program.) New York City is turning 7,000 of its payphones into Wi-Fi hotspots and in other jurisdictions phone booths have become mini libraries, and even public information points.

Better streetcar service inspired by other cities
Despite having one of the largest surface rail networks on the continent, Toronto just can't seem to get streetcars right. The network has never been expanded beyond the central city and in places downtown crowded streetcars are given no advantage over vehicles with just a few occupants. In Melbourne, Australia, which has a tram system two-thirds bigger than Toronto, there are special road rules designed to keep the road clear for public transit, including the famous hook turn. In Vienna, Austria, where "delays are rare," trams always have right of way. 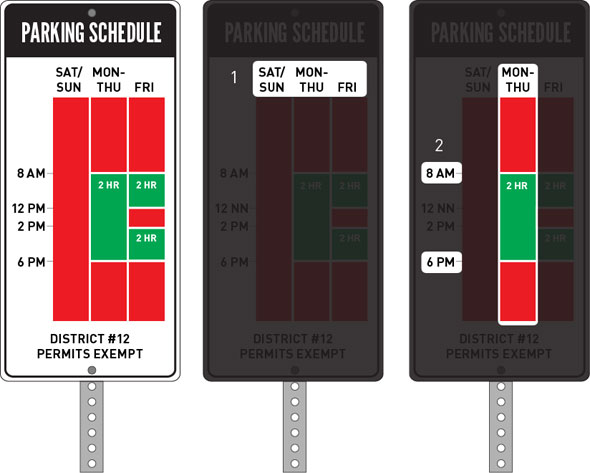 Simplified parking signs
Street parking in Toronto is a mess. Right now, a typical cluster of signs might read: "No parking 12:01 a.m. - 10:00 a.m. EXCEPT BY PERMIT," "Parking 1 HOUR 8:00 a.m. to 6 p.m. MON-FRI," "SNOW ROUTE," and "NO STANDING," all at the same time. Drivers need to crack the code to find out if it's OK to stop. New York City project "To Park or Not to Park" wants to swap that city's similarly confusing signs for simple, colour-coded schedules a child could understand. Toronto could do with something similar.

Libraries that lend more than just books
Libraries exist to provide free public access to information, but who says that information has to be printed on sliced pieces of tree? The Toronto Public Library system, like similar institutions in New York City and Chicago, could lend out free Wi-Fi hotspots to people without access to high speed internet, tools such as hammers and screwdrivers like in Berkeley, California, or telescopes as they do in Ann Arbor, Michigan. The TPL is already a world class institution, offering 3D printing, a video streaming service, digital books and magazines, but there's always room for innovation.

Photo of an NYC phone booth converted to WiFi hotspot