Twitter and toilet paper together at last! For those who missed the big news yesterday, a start-up called Shitter makes it easy to turn your tweets into toilet paper. News of the product launch got plenty of play in, um, the Twitterverse in the last 24 hours, not to mention other social media and web circles. Turns out the latest and greatest invention of the must-have bathroom supply actually has a Toronto connection.

Ian Ha is a software engineer at Blu Trumpet in Toronto. He also wrote the code that makes Shitter possible. He and some friends came up with the idea last year and have been working on development since January. They all have full time jobs so it's been something they've been plugging away at during their spare time. It officially launched yesterday. For $35 (plus shipping), Shitter will send you four rolls of toilet paper with the latest tweets from any Twitter feed. Already they've received several dozen orders. I caught up with Ha late last night and asked him to fill me in on some of the finer details.

What's the typical shipping fee for customers based in Toronto?

Because our printer and distribution is US based, the shipping fee to Canada is $25.

2-4 weeks is what we're looking at. Probably closer to 4.

How many orders can you handle a day?

We print in batches. We're looking at a several hundred rolls every two weeks or so, I believe.

Where do you get them printed?

Our printer is US based. We actually searched all over, China even, and found one in the US that we settled on.

Is there a limit to how many tweets can be printed on a roll?

The app takes the latest tweets. There's no filtering based on date (yet). The roll isn't a running stream of tweets (although that would be cool), but rather around 25-35 tweets that repeat. You can fit that many tweets in about 16 inches.

What's the quality of the toilet paper?

Not anything different from your average toilet paper at the supermarket. Pretty standard. Except with tweets!

Did you create this as a joke only? Or do you expect Shitter to grow into a sizable business?

Shitter is for anyone with a sense of humour! There's definitly an element of joking involved, for sure. The original intention was just to build something that we thought was fun and to put it out there and see what happens. There are talks to continue doing more projects under the umbrella of Collector's Edition for other creative startups and ideas. In fact it's already happend: The first project was not actually Shitter but TheMeaningOfMate.com. The end goal, for me, is to continue doing creative, fun stuff. 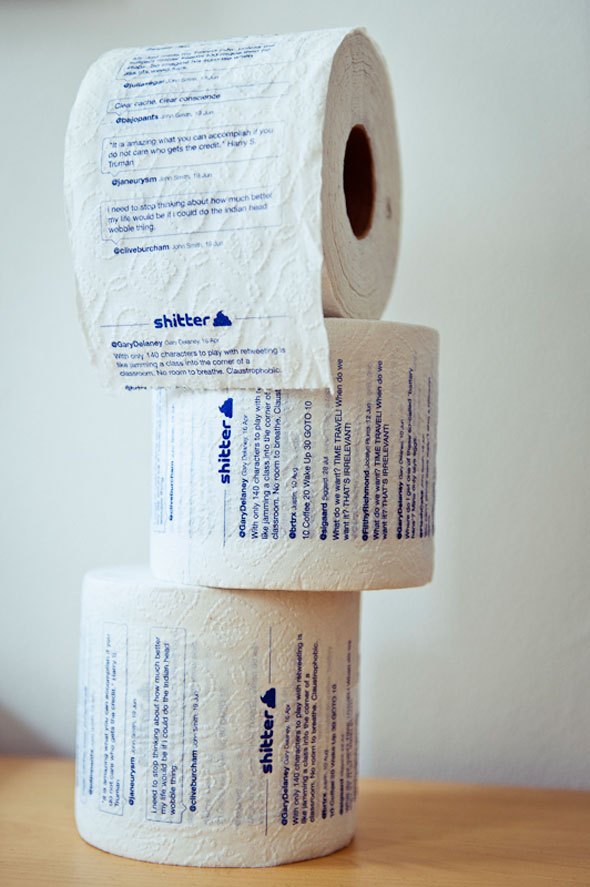