Is BarCraft Toronto the new Hockey Night in Canada?

Out of the basements and onto the streets. Nerds are coming out of their bedrooms and letting their geek flag fly in the city. One of the many new events catering to this new demographic is BarCraft, a monthly mixture of booze, nerds, and eSports. On Sunday, July 31st, Molly Blooms Pub on College street hosted the 6th Toronto BarCraft, an event attended by roughly 80 people.

eSports have been big business in South Korea for over a decade, but are just starting to make it big in North America. Starcraft 2, the newest game from World of Warcraft maker, Blizzard, has energized its North American fanbase. One of the biggest changes? Professional sports casters. "There were casters [for other games] before... but not on the level required to compete with normal sports in a bar." says local BarCraft organizer, Lorin Halpert.

Wait...compete with normal sports? How exactly does a game like Starcraft stack up against hockey? "As a viewer, you can see both player's strategies unfold," describes Halpert, "There is a real tension as you watch the players attempt to discover the others plan"

Last July fans packed Molly Blooms to watch the finals of the Major League Gaming pro-circuit stop in Anaheim. As prizes for North American tournaments have climbed, local favorites like Canadian Chris "HuK" Loranger have had to face stiff competition from Korean players like Jeong "Mvp" Jong Hyeon. The final matches streamed live at the bar were from a contingent of Korean players who swept the top 4 positions. 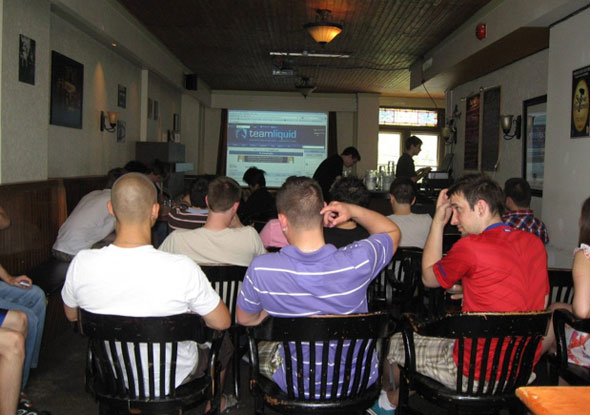 "The best part is when your watching a live game, and something unexpected happens, and the whole bar goes wild!" raves Halpert, "...watching a clutch play or something that looks like a crushing defeat turn into an amazing upset game!".

So is knowing how to play Starcraft required for watching a game? Not any more than it is for baseball. You make a bunch of army men, they go and kill the other guy. Sure, there are nuances, but watch a few games and you start to figure it out. "I definitely watch more than I play" admits Halpert, a position shared by many fans.

The games are played live in front of an audience, with a group of professional commentators describing the action in excited tones, as well as explaining the finer points of strategy to beginners. BarCraft events have sprung up all over North America, where organizers buy passes to high resolution streams of the events, and display them for the local eSports community to watch at willing bars and restaurants.

On August 28th, those interested in dabbling in eSports are welcome to join the locals in watching the the MLG Tournament at the Victory Cafe. Crowds are sure to be there in force, and word on the street is that HuK is training hard to improve from his 6th place finish at the last event. Here's hoping fans in Toronto have a Canadian to cheer in the finals!