I've been hearing this question asked a lot from photographers who've previously relied solely on Flickr to share their photos and interact with other shooters. In fact, traces of the Toronto-based start-up can be found all over the world's biggest photo sharing and storage site, whether it be the subject of discussion threads or in the form of notes that read "you can also see my work at 500px."

Given this rise in popularity and a recent $525,000 venture capital investment, it seemed like the right time to find out a bit more about the local company and why so many photographers have added it to the portfolio of websites through which they share their work. Accompanied by Tom Ryaboi, blogTO's photo editor, I headed down to Ryerson's Digitial Media Zone to meet with the members of the 500px team, Oleg Gutsol (Technical Director), Ian Sobolev (Creative Director), and Andrey Tochilin (Director of Marketing and Sales). 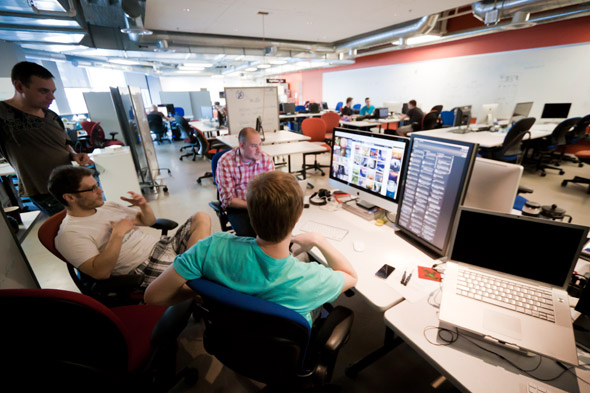 Over crappy coffee and a box of butter tarts â this is a start-up, after all â Sobolev tell us that 500px had its roots back in 2003 as LiveJournal blog that featured a tightly curated selection of reader-submitted photos. To some extent, it still works this way today, but a community voting system and ranking algorithm take care of ensuring that the site features photos of the highest quality. Unlike Flickr, which requires that users submit photos to groups for evaluation and feedback, this interactive functionality is built into every photo page on 500px.

Although it took a while to generate interest in this more community-oriented model after the site's official launch in fall 2009, the last few months have seen enormous growth (of their 100,000 some odd users, over half have joined in the last six months). Part of that has to do with influential Flickr members like Thomas Hawk endorsing the project, and part of it has to do with the fact that, for photography enthusiasts, the product is just better than what's on offer elsewhere.

Not only does the free-version of site look slicker than the competition, but with premium accounts ($50) photographers are able to create personal (i.e. unbranded) portfolios/websites that look like they're built from scratch and save money on hosting fees (the $50 covers everything but a domain name). Considering that iPhone and iPad apps are in the pipe, this is an attractive package for photographers looking to increase or improve their web presence. So far the number of premium users is relatively small, but as the overall popularity of the site grows, I'd expect this revenue source to increase considerably. 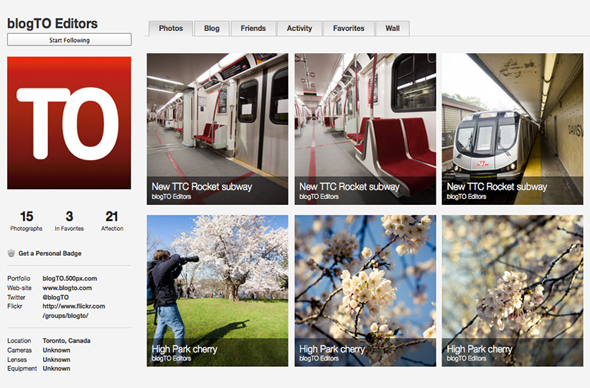 Now that 500px has taken off, so to speak, it becomes realistic to talk about the company grabbing some serious market share from Flickr, which has been the default choice for most enthusiast photographers for quite some time. When asked how he'd differentiate the two sites, Gutsol's succint. "Quality, community and the user experience," he says of the advantages he thinks 500px offers. Having used the site, I tend to agree. This isn't a place to store a bunch of family photos (which Flickr, on the other hand, works well for), but it will continue to attract the attention of those for whom photography is a hobby or passion.

On the way to meet the 500px team, Tom and I enter the office elevator at 10 Dundas East with a building security guard making his rounds. Curious with our presence, he asks where we're headed. "Fifth floor, the 500px offices," we reply almost in unison. At this, he returns one of the most quizzical looks I've ever had the pleasure of receiving. "Never heard of them," he offers.

"You will soon," came Tom's response.

I can't help but concur.