As much as readers have expressed delight at our regular historical photo posts, there's a familiar refrain when it comes to constructive criticism: give us location info, please. It's useful feedback, to be sure â but, without making excuses, there are times when such information is tough to come by, be it because the archival photos lack tags or because the descriptions that accompany them are inaccurate to begin with. Nevertheless, a quick perusal of these posts reveals that our community of readers is generally able to step in when we fall short.

Operating in a similar capacity is a new interactive map project that aims to fashion what its creators call "a virtual time machine." By combining Google's Street View technology and user uploaded historical photos, WhatWasThere enables visitors "to navigate familiar streets as they appeared in the past." 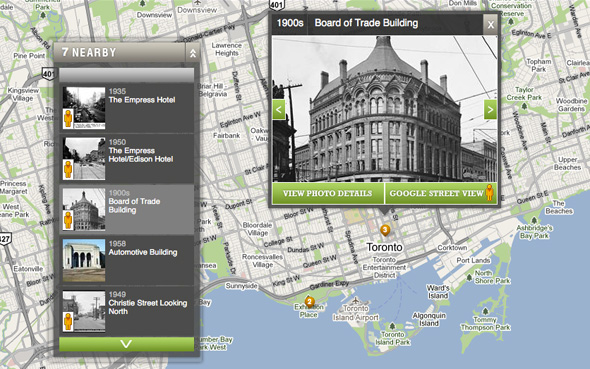 Similar to Street Art View, the graffiti documentation project we wrote about last month, WhatWasThere can be used in a passive or active manner. In terms of the former, all one needs to do is select the city of his or her choice and start navigating the virtual city of the past. Clicking on individual photos or location points takes the user to a Street View screen in which the older photo is merged with the current streetscape. As you can see from the lead image, the process isn't seamless, but it works fairly well if the person who uploaded the photo took the care to place it properly.

At present, however, this exploratory experience is rather limited. Having launched only last month, WhatWasThere has yet to acquire the number of photos needed for users to get a good sense of what their city looked like in the past. Toronto, for instance, only features seven user uploads, two of which are of the Empress Hotel at Yonge and Gould.

That's where the participatory side of the site comes in. When I discovered WhatWasThere, I decided to try it out by uploading a photo of the Board of Trade Building that used to sit at the northeast corner of Yonge and Front streets. The process was a cinch: all one needs to know is the decade from which his image derives and the location it depicts. There are additional options for keeners, but the system works just fine when only this basic information is provided. 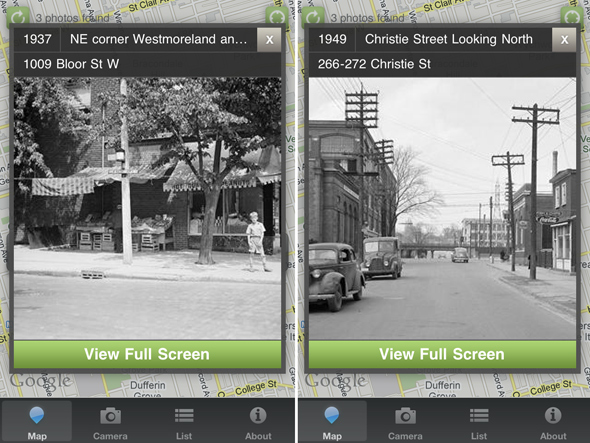 The prospect of a well-populated map is tantalizing to say the least. Along with the website, WhatWasThere offers a free GPS-based iPhone app that offers a potentially even more rewarding experience. Instead of having to look at everything on a computer screen, the mobile app literally takes the experience to the street. Imagine having the ability to call up old images of the city while you're out actually exploring it in the present â very cool.

Should enough people participate, a virtual map of Toronto's heritage could function as both a nostalgia-inducing record of the city as it used to be and a powerful way to foster awareness of our rich but often neglected heritage. I'll be taking some time to upload photos from our historical posts over the weekend, and ask that my fellow Torontophiles do the same. Perhaps after doing so, WhatWasThere will live up to its significant potential.